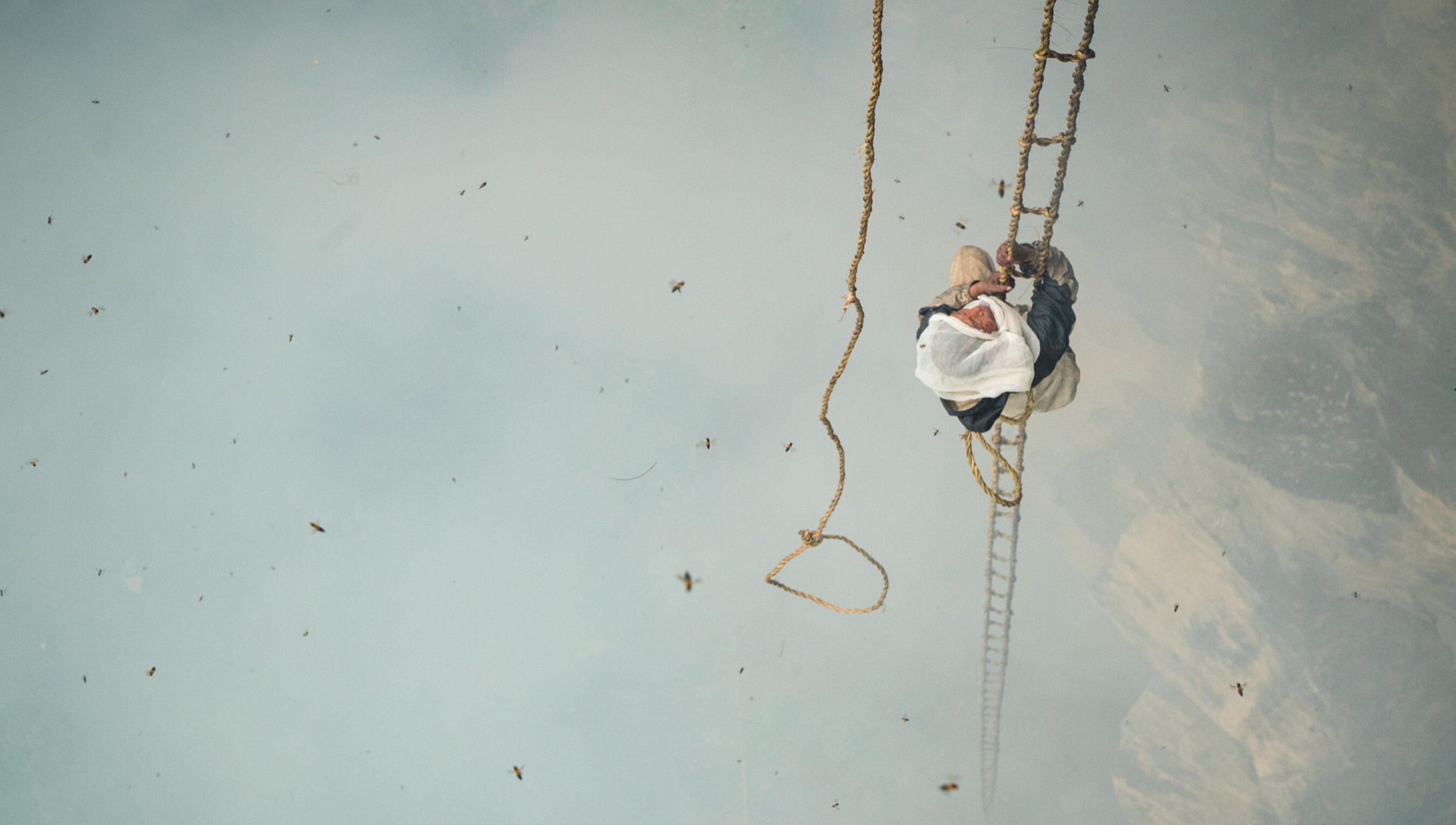 Mauli Dhan is the only person in his village in the Hongu River valley in Nepal who is empowered to collect the local wild honey. In the belief system of Dhan’s community, the Kulung Indigenous people of Nepal, a spirit called Rongkemi rules over the mountains, forests and valleys, and protects the bees and their hives. Only someone who has had a special dream can safely harvest the honey without provoking Rongkemi’s wrath. Anyone else who tries will risk terrible misfortune. Though he never wanted to be a harvester, Dhan had a dream that marks him as one chosen for the dangerous, arduous task of climbing precarious ropes and scaling sheer cliff faces to collect honeycombs.

Made by the world’s largest honeybees, the honey is toxic, but its psychotropic properties have made it a traditional medicine in Kulung culture. Now, though, it also fetches high prices in Kathmandu and beyond, offering both much needed income for Dhan’s isolated village and putting external pressures on his gruelling work. At the same time, perhaps due to climate change or pollution, the bees are moving higher into the mountains, which means that Dhan and the team that helps him must trek ever further to harvest the honey.

The Last Honey Hunter, a short documentary by the US filmmaker Ben Knight telling Dhan’s story, is itself an intoxicating, destabilising creation. With cinematography and sound design that immerse us in the rhythms of village life, the rituals and work of the honey harvest and the palpable presence of the mountains, rivers and forests of the Hongu valley, the film evokes nature’s power, offering a way to understand the spiritual beliefs of the Kulung. At the same time, Dhan’s experiences – his respect for and fear of Rongkemi, his grudging performance of the harvest, his feeling that he’s been cursed for destroying so many hives – undercut any sense of this being a starry-eyed paean to ‘tradition’. Rather, with Dhan’s own conflicted relationship to his role at the centre, the film seems to be about a deeply human experience of precarity, about the immense difficulty of navigating between culture and nature, tradition and modernity, spiritual beliefs and material needs, the individual and the community. Dhan embodies the confluence and collision point of these great forces, a reluctant, tragic hero. But he’s also a real man, and the film’s true power lies in insisting that we acknowledge his suffering amid the rich aesthetic experience it offers us.