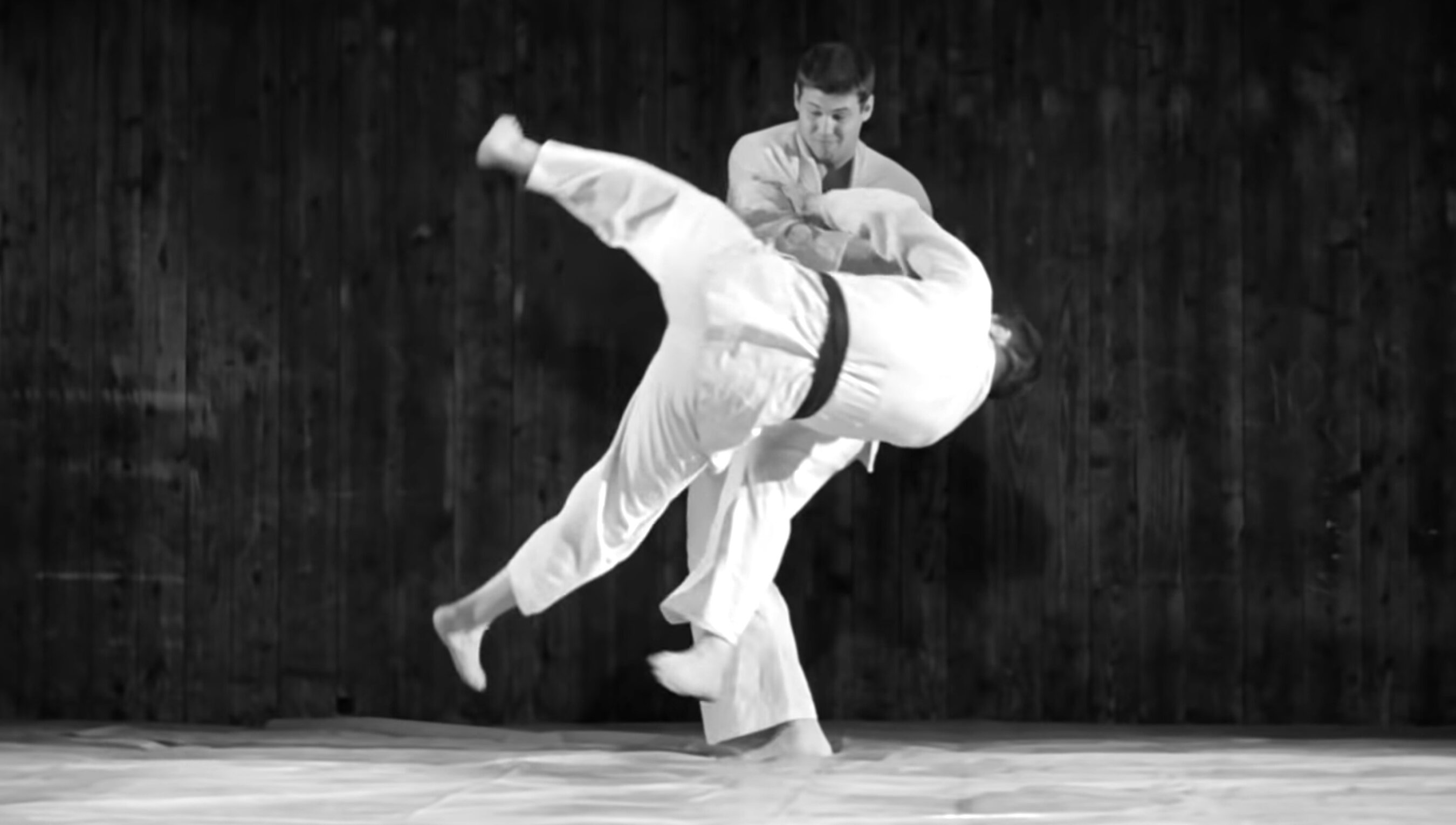 In the long line of tales about warriors and fighters that winds through human history, training is a recurring theme. We seem to have a fascination with rigorous practices aimed at conditioning the mind as well as the body, especially when they reflect a set of values, a philosophy, a code. Judoka (1965), a short documentary by the Canadian filmmaker Josef Reeve, melds the familiar foundation of the fighter-in-training trope with surprising elements of a different genre to offer a fascinating primer on judo.

The premise is simple enough: Doug Rogers, a Canadian who went to Japan in 1960 at the age of 19 to train as a judoka, narrates his life in the aftermath of an impressive and unexpected silver medal at the 1964 Tokyo Olympics. But his first line – ‘I was almost a champion of the world in something that was worth being a champion in.’ – sounds straight out of a film noir, even echoing Marlon Brando’s line as the boxer Terry Malloy in On the Waterfront (1954): ‘I coulda been a contender. I coulda been somebody.’ Rogers’s words epitomise some of noir’s recurring concerns – melancholy, ambiguity, brutality; an everyman trapped in a bad situation; the past catching up with the present.

But in Judoka, Reeve deploys this noirish mood and its look – stark black and white cinematography, staccato editing – to unusual ends. Rather than the disillusionment, dissolution and dangerous entanglements of the genre, Rogers’s story is largely about all the good that comes from doing hard things – the difficult decision to leave home leads him to a teacher; the ‘unreasonable’ number of push-ups judokas do every day helps them transcend physical limitations; his fellow fighters give him a warmer welcome than he ever felt at college in Canada. His manner is earnest, gently jocular and kind. And then we see him repeatedly slamming an opponent to the mat or receiving the same treatment. It’s a startling contrast, and it has a point.

Two central tenets of judo are jū yoku gō o seisu (softness controls hardness) and jita kyōei (mutual welfare and benefit). Rogers’s narration circles these ideas, but Reeve makes them palpable. In a remarkably judo-like redirection of noir’s dark appeal and violent forces, he creates a warm, humane and playful invitation to enter the seemingly forbidding realm of elite martial arts – and Rogers’s own lived experience as he strives for personal growth, supported by a caring community and a woman he loves. At the end, the formidable fighter wonders whether he’s made a mistake in choosing this path; in the next breath, he expresses gratitude with generous and gentle simplicity. It’s another moment of softness overcoming.