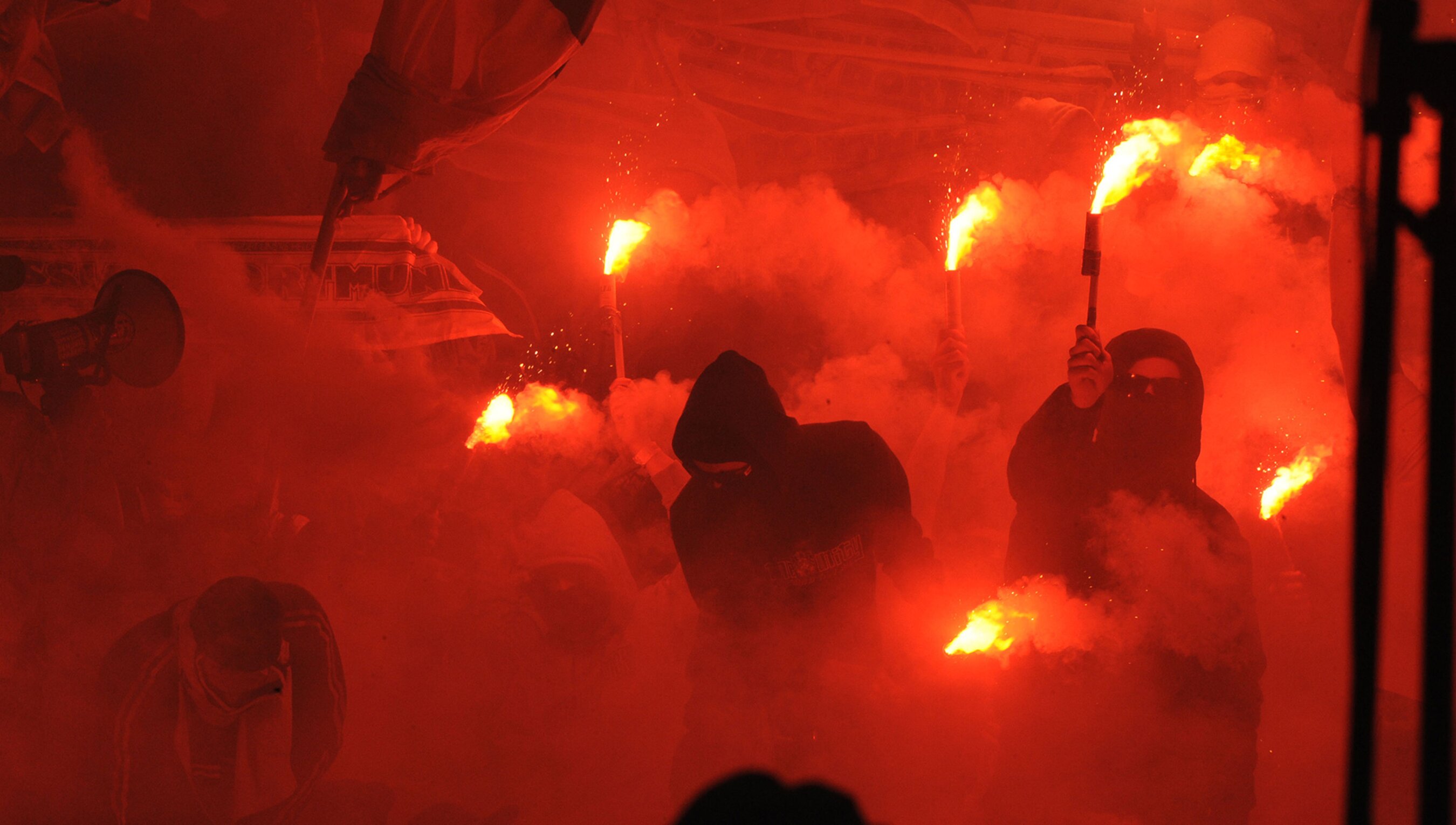 Why do hardcore football fans behave like rutting stags?

At my first match, in south London, Viking-like war chants from nearby football fans and those supporting the opposing team echo from one end of the stadium and back again, sometimes accompanied by drums, sometimes by several thousand solemn claps, forcing the hairs on the back of my neck to stand on end, primed for potential danger. The camaraderie invoked by these mass incantations can bridge generational gaps, ethnic divides and language barriers. It’s something I find irresistible and contagious. It offers acceptance. But at the far side of the soccer stadium, a group of young men is gesticulating wildly at a subset of the fans in my stand. They make death threats, imitating a knife slitting a throat or a hangman’s noose. I find that my eyes are trained on them, alert to the risk they might pose, even with a football pitch between us. I’m told that someone threw a brick from the top of the stand down on to a group of rival fans a few weeks ago.

When my research on football fandom takes off, years later, I read gruesome accounts of violence from all over the world – men being left in pools of their own blood for wearing the wrong-coloured shirt, stabbed or kicked to death. Yet football-related violence is far more complex than the myths around hooliganism would have us believe.

Football fans can be likened to rutting stags, in that much of their hostility and cajoling is ritualistic. The to-and-fro around stadia, and the local streets and pubs on a match day, demonstrates this nicely: fans tend to stick to streets or pubs they know they’re welcome in (or are made to stay in by police for high-risk matches); shouting and throwing objects often happens as two groups walk away from one another; and group members nearly always step up to pull one another back. The idea is that fans understand the rules enough to let off steam, safely. However, sometimes, these ritual boundaries, in all their subtlety, can collapse.

The sheer size of the fan-base means that, even if violent fans are a tiny minority, their violence still presents a sizeable problem. Research suggests that football violence is not predicated on race or ethnicity, despite the racist chanting that still plagues the game. Nor is it related to what psychologists call ‘social maladjustment’. Aside from being a man (the biggest predictor of violence more generally), what lies at the heart of the name-calling, bottle-throwing and physical fighting?

Over the eight years that I’ve researched football fandom in Europe, Latin America, Asia and Australia, fans have told me that ‘football binds us all together like nothin’ else’. When they were young, they felt like ‘part of a tribe, the animal came pouring out every Saturday, all you wanted/needed to do was act like an animal and fight any other tribe that came into your area’. I began to suspect that identity fusion, an extreme and enduring form of social bonding, held the answer to the toxic flip. For the fused fan, the fantastical contest of football becomes an irrevocable part of their identity.

One diehard fan had tattooed the club insignia on his testicles; for some fans, the club came before their own children

Identity fusion is the ‘oneness’ we feel with the people that help make you ‘you’ – your family, for instance. This intense form of bonding leads to extraordinary pro-group behaviours; we see it in people so fused to their nation that they promptly give blood following a terrorist attack, or among military insurgents so closely bonded to their comrades that they’ll risk it all on the frontline. When I began this research, some naysayers doubted that fusion would even exist for a social target as ‘arbitrary’ as football. I wondered if these critics had ever witnessed live football in Europe or Latin America.

Pro-group commitment is rife in fan culture. Fans travel huge distances for away games, invest time and money participating in their teams’ events, and often display visual symbols of allegiance to their team, including lifelong and painful tattoos. In surveys with more than 700 British football fans, I discovered that one diehard fan had tattooed the club insignia on his testicles and that for some fans, when push came to shove, the club came before their own children. So heavily invested are some fans that match results have even been associated with spikes in heart attacks. Football matches can generate a sense of belonging so deep that an individual’s bond to their club and fellow fans is permanent. Unlike typical crowd identities, where one’s sense of self dissolves and is anonymised, fused people still recognise individual uniqueness. This is partly what makes it so powerful.

Fused fans are personally invested. Take the fan who told me that when he saw his favourite player get injured, he felt ‘sad … remorse like it was my brother; I really wept bitterly’. This sense of ‘kinship’ appears between fans too, and is a key reason behind the more violent behaviours. Fused fans are laying down their lives for what they perceive to be their ‘brothers in arms’.

Football ‘casuals’ or ‘ultras’ (cultures of hardcore football fans) often have their own unique style and don’t wear their team’s colours at all – the strip is effectively internalised, obviating the need to display it. Because bonded fans are ready to ‘go down with the ship’, they’re resilient to negative team outcomes. In fact, bitter defeats only bond them more tightly together: ‘The club I support isn’t about winning, it’s about being in the shit together,’ said one fan. Another fan said his club caused ‘more lows than highs … but it is that unexpected element which is like a drug.’

The trouble starts when fused fans, for whom the group’s best interests come first, turn their prosocial behaviours to less desirable outcomes: the football fights, the mass brawls, the ugly brutality that’s hung over the game for decades. For fused fans, football violence is not necessarily ‘mindless’, as polite society tends to think. Conflict between fused fans is usually targeted specifically toward threatening rivals. Brazil’s torcidas organizadas – extreme fans, famed for their drumming, and intense pyrotechnic displays using flares – reported significantly more fusion to fellow fans and more past physical violence than did general football fans, but this violence was almost exclusively targeted at rivals. Markers of social adjustment or class were irrelevant: in all other domains, these hardcore fans lived very conventional, well-adjusted lives. These findings echo multiple testimonies I’ve heard from Dedicated Football Officers – specially trained and highly skilled police officers at football policing units across the country.

When their group is threatened, fused fans, whose personal and social selves are entirely merged, perceive this as an attack on their very self, and will go to extreme lengths to protect and defend the group. The sometimes terrifying results are amplified with intoxicants, traditionally alcohol, but increasingly cocaine. Fans getting up at 5am to travel to an away game often start the business of group intoxication on the away bus. While alcohol renders football ‘lads’ relatively incompetent by late afternoon, ego-inflating cocaine keeps them active and focused well into the night. Fused fans who report using cocaine are the most aggressive to their rivals.

Football-related violence is a planet-wide problem, with death rates rising from Brazil to Indonesia

Like all of us, football fans have layers of concentric group identities. At the core are the other fans of your team, with whom you watch the game and gossip about the club’s fate, and whose lives are interwoven with your own – maybe they’re your best friends or siblings. Next, there are the fans of your team in general: you won’t know the vast majority of them, but they’re still your people. Then there are the other fans of your national team, with whom you gather in your millions every few years, imbued with the history and heat of your national identities – you recognise one another when you’re abroad.

If you’re an ‘ultra’ or football hooligan, you might even recognise another ultra walking along the beach in their swimming trunks. I’m told it’s not the tattoos or haircut that give it away: it’s the gait, the way they hold themselves. Hardcore fans use body language to recognise other fans who, like them, pose the highest risk; and as these fan identities effectively never switch off, those cultural traits are paraded wherever they go. Even these ‘risk fans’ can switch through identity categories relatively deftly: when gathering abroad for an international match, risk fans from different clubs will band together in the name of a national football identity, putting aside their regional loyalties to fight a national rival – until they return home.

Ultimately, as a football fan, you recognise a degree of affinity with all other football fans. Period. They know the score (literally). Whatever the club, they know how it feels to travel on a bus for hours to watch a club they love get thrashed in the pouring rain; they know the sweet taste of beating a local rival, the stench of sweat cutting through spilt lager in the pub when that last-minute goal is scored. Football is, as any fan will tell you, a global force to be reckoned with.

Football-related violence is a planet-wide problem, with death rates rising from Brazil to Indonesia. In the UK, scenes of naked violence – the physical clashes and their bloody results, once dubbed ‘the English disease’ – have largely moved underground, following decades of heavy sanctions, including international bans for both fans and clubs. Nowadays, ‘risk fans’ – identified by the police as continuous troublemakers, or who are connected to football ‘firms’ or gangs – might meet for a prearranged spat in the middle of the night at a service station, rather than take up the whole of a busy street in the town centre for a scheduled punch-up. However, spontaneous clashes between fans still erupt, despite heavy CCTV and police presence at all high-profile games. The Metropolitan Police in London alone spends more than £4 million a year on policing Premier League football games, very little of which is recovered from London’s wealthy clubs. Despite this, the UK is generally considered a success story.

As humans, we shift through layers of identity easily, selecting those appropriate to a given context. So, on match day, we root for our club. At work, we meet someone who’s into football and there’s a connection. But for the fused fan, that football identity never switches off. Football is where all their attention lies when it kicks off. And kick off it does.

Sports and gamesGenderRituals and celebrations
14 July 2021