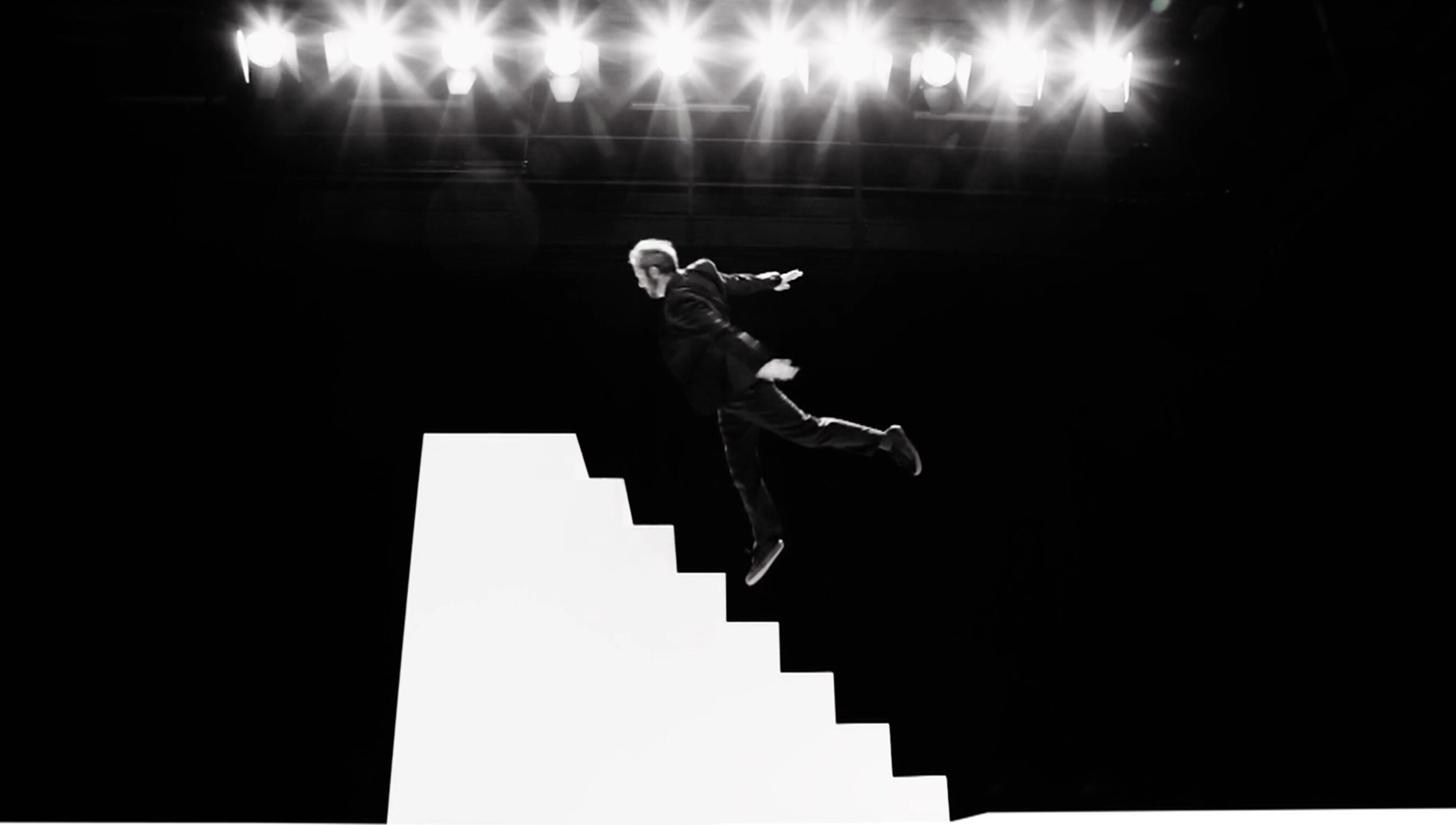 ‘There’s a moment when a child chooses a direction, as part of growing up, and that is a step that I never managed to take. Fortunately, I found the circus, which allowed me to remain undisciplined.’
– Yoann Bourgeois

There’s a curious contradiction in these words from the French acrobat, choreographer and director Yoann Bourgeois. Given his accomplishments and talents, what a lack of direction and discipline looks like for Bourgeois is rather unique. He’s expert in using trampolines in inventive, poetic, circus-inspired contemporary dance. He’s won numerous awards. He’s presented his work in prestigious venues. His performances have drawn comparisons to the slapstick skills of Charlie Chaplin and Buster Keaton.

Squaring his achievements and abilities with his own description of his work becomes easier when we look at some of the recurring themes of his choreographies. Striving, stumbling and falling feature prominently, often to simultaneously pathos-filled and comedic effect. At the same time, he’s fascinated by physical forces and how bodies interact with them, an interest he calls ‘research that doesn’t have an end in itself’. If there’s no definitive aim of this ongoing experimentation with movement, it manifests as something magnificent: human forms that seem momentarily freed from gravity, that fly, float and touch down in beguiling ways.

Whereas his primary productions are meant to be experienced in person, in situ, the short film Clair de lune by the French filmmaker Raphaël Wertheimer uses tools of cinema – camera angles that shift perspective, editing that accentuates the music’s contours, a stark black and white palette – to explore elements one of Bourgeois’s most celebrated choreographies, La mécanique de l’histoire (The Mechanics of History). Adapting that work into a one-man performance set to Claude Debussy’s beloved composition Clair de lune, Bourgeois draws out the theme of childhood and time. Describing his collaboration with the French pianist Alexandre Tharaud, whose rendition of Clair de lune graces the film, Bourgeois says, ‘To create – to be creative – is to draw a door on the wall, and then open the door. Clair de lune opens this door wide to transport us to a time where time doesn’t pass. That’s why we become children again when we listen to this music.’

Although the film Clair de lune is an abstracted interpretation of a childlike experience of time, Bourgeois’s idea here perhaps resolves some of the oppositional tension in his account of his work. In a sense, by becoming hugely adept at moving through space and interacting with objects, he has figured out how to retain a child’s engagement with the world, one in which stumbling and falling amount to learning, in which repetition is about exploration, and in which just about anything – including trying to get to the top of the stairs – can be a game.