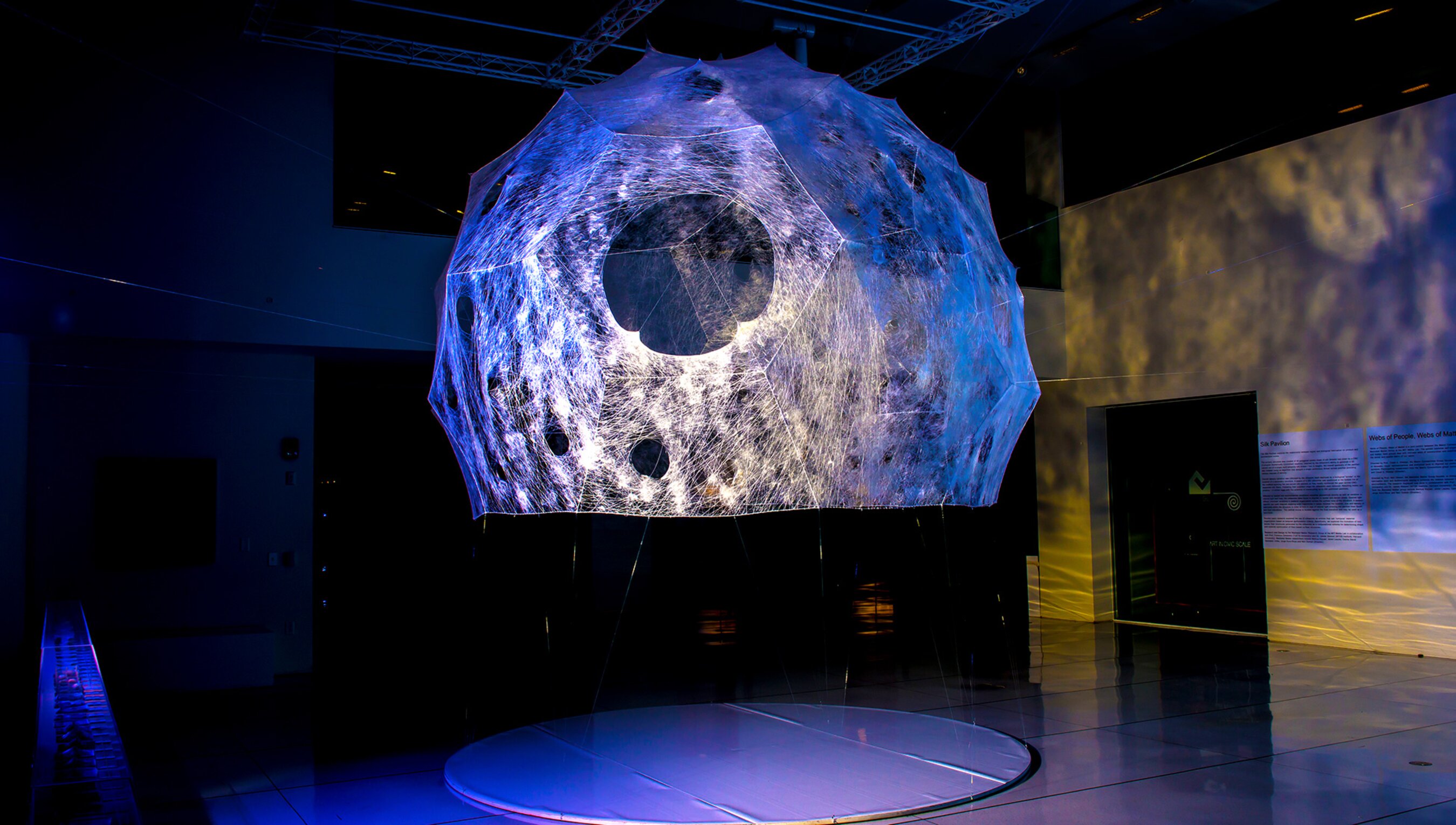 A human–silkworm collaboration shows the way to sustainable design

is a PhD researcher at the University of Cambridge, working at the intersection of design theory, technology ethics and critical AI studies. He is also a PhD fellow at the Leverhulme Centre for the Future of Intelligence, where he contributes to the AI: Narratives and Justice programme.

With advancements in artificial intelligence (AI), it’s common to hear designers preach about the need for human-centred technology – systems, devices and software that cater to our specific human needs, behaviours and foibles. As algorithms affect our lives in profound yet invisible ways, placing the human at the centre of the design process is meant to ensure that they work in our favour – and that we get technological progress right. Most often, this approach translates into products and tools that are intuitive and user-friendly, and that support human wellbeing.

But what if situating the human at the heart of design isn’t enough to steer innovation in the right direction? What if it’s precisely what we should avoid? Human-centred thinking has marked drawbacks. We can trace the desire to focus on the human – and the human alone – to an anthropocentric logic that has guided technological development for centuries and, ultimately, led to the current state of ecological crisis. Viewed in this light, the rise of AI represents a chance to forge new, less extractive but still productive relationships with the organisms and entities with which we share the planet.

‘[A]ll design is human-centred,’ argues Paola Antonelli, senior curator at the Museum of Modern Art (MoMA) in New York, ‘in that it touches all live beings … but cares only about some – humans.’ For Antonelli, human-centric inevitably translates to egocentric, because it ‘reflects an old anthropocentric and anthropogenic view of reality’. The calls to prioritise the human in design, even if well-meaning, fails to address the biggest challenge ahead of us: reconciling our distinctly human needs with environmental concerns. The potential for change lies in what Antonelli calls allocentric design – as the opposite of egocentric – an approach to making that acknowledges the interdependence of species and aims to ensure the flourishing of us all.

In early 2020, Antonelli curated an exhibition at MoMA dedicated to the designer Neri Oxman. Oxman labels her work as naturecentric, but it’s of a piece with allocentric design, since nature for Oxman stands for a complex system of interactions in which the human is only a single component. Oxman’s process, which she has been working out with the Mediated Matter group at the MIT Media Lab, is a good example of what de-centring the human in design could mean in practice. It also shows how new, AI-based technologies could help us mediate between human needs, environmental constraints and the wellbeing of other entities with which we share the planet.

Silk Pavilion (2013), a dome of stainless steel and silk threads (275 x 275 x 300 cm), is one of Oxman’s most frequently exhibited projects. The Pavilion explores the potential for interspecies co-design, in which both human and nonhuman actors are co-creators and stakeholders. Searching for alternatives to synthetic materials used in product and architectural design, Oxman’s team studied the Bombyx mori silkworm’s cocoon-production patterns. To ‘reverse engineer’ the silkworm’s spinning behaviour, the group examined naturally occurring fabrication patterns to reproduce them on a new scale. They learned that the silkworm’s movements were affected by environmental conditions such as natural light and heat and that, by manipulating these factors, humans could direct the worm’s spinning.

Human making has had an unprecedented impact on the planet, but we’re not the only makers out there

In the subsequent phase, the collected data served to compute a scalable model for the Pavilion dome: composed of 26 polygonal stainless-steel frames, the structure’s skeleton was filled with silk threads by a computer-numerically controlled machine, generating an optimal scaffolding for living silkworms to begin their spinning. In the final phase, 6,500 silkworms were released on to the shell. Over a period of three weeks, they completed the dome, closing the gaps between the machine-spun threads with new silk fibres.

The algorithm that initially replicated the living silkworm’s behaviour also directed this process of biological growth – mediating between species so as to optimise construction and avoid excess use of resources. The benefits of the Pavilion model are manifold. Combining digital and biological fibre-based fabrication allows for a more sustainable silk-harvesting cycle: the way humans process silk cocoons into a usable material can be omitted, and there’s no need for any interference with the silkworm’s reproduction cycle. The worms underwent metamorphosis in the course of the project and later, as grown moths, laid more than a million eggs – ‘enough for about 250 additional pavilions’. In this way, allocentric design deploys algorithms not in a manner that alienates the final product from its organic co-creators and users, but rather facilitates a dialogue between the environment, biological making and human planning.

Allocentric design recognises the value of species by seeing them as nodes in a wider network of interdependencies – a system in which diverse agents design the world together, and experience it side by side. The conceptual de-centring of the human in design rejects an environmentalism in which technology is solely about stopping human decline. When design is interested in sustainability only as a way of maintaining the anthropocentric status quo – of keeping humans at the top of the pile – it fails to combat the logic at the core of the current crisis.

Oxman’s process reformulates anthropogenic change as an opportunity to envision new forms of creative co-production and co-existence between species. Human making has had an unprecedented impact on the planet, but we’re not the only makers out there. De-centring the human means revising our view of who gets to ‘use’ the planet as an object of design, as well as who’s allowed to ‘make’ it. Allocentric design postulates a ‘co-culture over single organism culture’ – to reformulate making as a fundamentally collaborative, trans-species experience.

We can easily pinpoint the benefits of the Silk Pavilion model thanks to its materiality and the fact that it can be scaled up and down. Settling on a similar recalibration of design from human-centric to allocentric is less straightforward when it comes to more complex systems. As researchers at the University of Massachusetts Amherst have shown, developing an efficient AI system is ‘costly … both financially, due to the cost of hardware and electricity or cloud compute time, and environmentally, due to the carbon footprint required to fuel modern tensor processing hardware’. Allocentric design of powerful technologies can’t remain oblivious to these material, if concealed, realities of production. In some cases, considering the environment itself as an important stakeholder in the design process might require that we abandon the project altogether – if it seems that humans would be the only species benefiting from its execution.

To understand the implications of human-centrism for contemporary technology, we can’t ignore the model’s Western roots, hinging on a separation of the human from the natural. Nor can we ignore the disconnect between those designers who shun human-centrism as a relic of the anthropocentric past, and those who embrace it as a guiding principle for future action. Examining artificial intelligence and environmental wellbeing alongside one another is vital in the Anthropocene: not just because the former can enhance the latter, but because advanced technologies force us to ask ourselves who – or what – should be the focus of contemporary practices of making.

Published in association with the Leverhulme Centre for the Future of Intelligence, an Aeon+Psyche Strategic Partner.

Artists and movementsCreativityEcology and the environment
2 March 2021