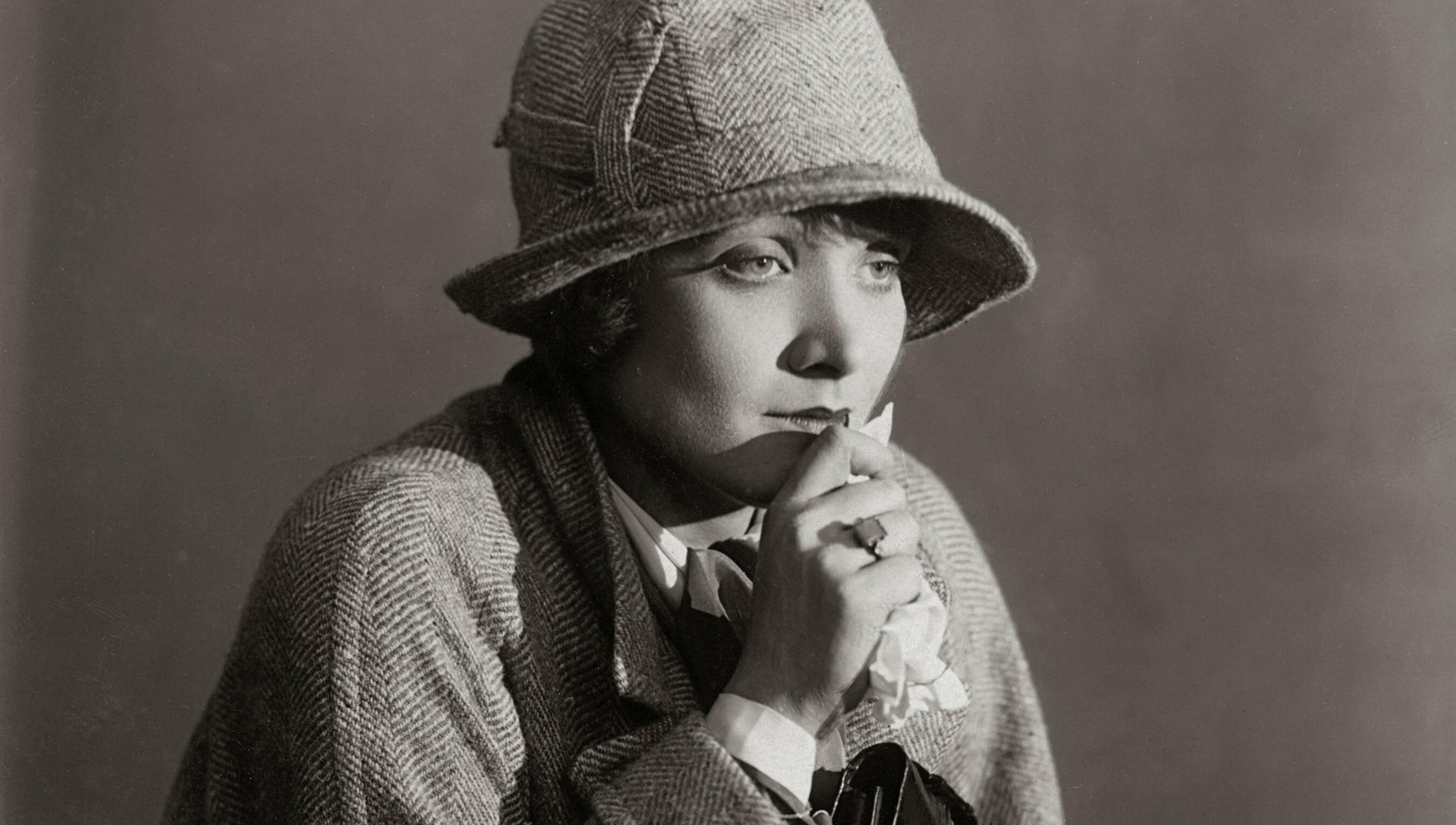 is a novelist/nonfiction author. Her books include Blackout (2010), The Quiddity of Will Self (2012), The Fragments of My Father (2020) and Chauvo-Feminism (2021). She is also managing director of the publishing house Dodo Ink. She lives in London.

‘Kaloprosopia’ means transforming your personality by living your life as a work of art. The term was coined in the late 19th century by the French writer Joséphin Péladan in reaction to the growth of capitalism and mass commerce, to people being herded into becoming consumers. Kaloprosopia – from the Greek καλός (beautiful) and πρόσωπον (person) – enabled one to stand out. A century on, with so many of us on social media, the effect of such self-styling is diluted; it is hard to resist the impulse towards conformity. We are just as likely to adopt group personas as our own, creating bubbles and echo chambers, shaping our posts to glean Likes, and mimicking the language of our circle. But, in the past, self-creation was often an act of resistance. The adoption of a mask might be both protective and illuminating, allowing someone a chance to flout convention and explore aspects of their character that would otherwise remain repressed.

Oscar Wilde stands out in the annals of kaloprosopia, his self-reinvention beginning at university in Oxford, where he exchanged his Irish accent for an English one, became notorious for his wit, and decorated his room in the style of Aestheticism – ‘I find it harder and harder every day to live up to my blue china,’ he quipped. In the previous century, we might think of Andy Warhol, whose skew-whiff wigs and nervous mumbling in interviews became as iconic as his Pop Art, or David Bowie, whose mercurial shifts from persona to persona – Ziggy Stardust to Halloween Jack to the Thin White Duke – became a game his fans delighted in, wondering who Bowie would become next. Madonna and Lady Gaga would adopt the same conceit, surfing the restless waves of a capitalist economy seeking the next best thing by perpetually recreating themselves as the next best thing.

Marlene Dietrich, too, devoted her adult life to the art of kaloprosopia. At the age of 11, Maria Magdalene became Marlene (a name that didn’t exist at the time), and not long after she determined to become an actress. Her breakout success came in 1930 with The Blue Angel, Germany’s first talking film. Directed by Josef von Sternberg, it cast Dietrich as an icily destructive femme fatale. Paramount executives, who’d been seeking a star to rival Greta Garbo, swooped down, enticing Dietrich to Hollywood with a seven-picture deal. Dietrich liked to pretend that The Blue Angel was her debut film when, in fact, while living in Weimar Berlin, she’d starred in nearly 20 silent films (which she later denied and disowned), looking very different from the glamorous blonde icon we know: dark haired, a little chubby and unpolished.

In each film that Dietrich and von Sternberg made together, she played variations on the femme fatale archetype: aloof, seductive, poised. At first, von Sternberg seemed to have the dominant hand: Dietrich claimed he was determined ‘to Pygmalionise’ her. But while Pygmalion breathed life into the female statue he created, von Sternberg performed the reverse on Dietrich, helping shape her as the star whose beauty – staged and lit to perfection – was almost statuesque. Insisting that his actors were ‘marionettes, pieces of colour on my canvas’, von Sternberg would give Dietrich precise instructions on where to stand, walk, talk and pause on set.

But Dietrich was no mere mannequin: Jean Cocteau called her ‘the most terrifying and exciting woman I have ever known’. Her real relationship with von Sternberg was collaborative. Each became a muse to the other, and they challenged each other, flinging down ‘artistic gauntlets like duelists’, according to the biography by Dietrich’s daughter, Maria Riva. Each character von Sternberg created was directly inspired by his infatuation with Dietrich, melding fact and fiction, mixing her character with his imaginative fantasy; in Morocco (1930), she wears what became her trademark tuxedo, top hat and tails, which were inspired by outfits he’d seen her wear in her Weimar days.

Dietrich would sometimes refer to herself in the third person, as if her persona were a lifelong portrait she might layer and finesse, year on year

Google ‘Dietrich’, and you’ll be dazzled by images capturing her elegant, sultry beauty. She vetted every picture ever released of her. Dietrich learnt from von Sternberg exactly how lighting could accentuate every hollow and curve in her face. At one point, she had her molars removed so that her cheeks would sink in further.

By the end of 1930, Dietrich was world famous. She would sometimes refer to herself in the third person, as if her persona were a lifelong portrait she might layer and finesse, year on year. She cultivated a mysterious allure that wreaths her pictures like cigarette smoke from an elegant holder. ‘Each man or woman should be able to find in the actress the thing he or she most desires, and still be left with the promise that they will find something new and exciting every time they see her again,’ she declared in a press interview.

Carl Jung coined the term persona, derived from the Latin for ‘character’, to describe the protective masks that people adopt in their daily role-playing. Just as Dietrich devoted herself to kaloprosopia, Bowie – an avowed admirer of hers – adopted exaggerated personas, drawing attention to the theatricality of the compromise between self and society that we struggle with daily. He liberated fans who mimicked him, inspiring them to break with social constraints, particularly those of gender and sexuality. With Ziggy Stardust – a red-haired bisexual alien rock-star character – he helped thousands of gays and bis out of the closet. Dietrich had likewise embraced androgyny in her public dress, and was bi in her private life. Bowie paid Dietrich homage on his Hunky Dory (1971) UK album cover, a look inspired by a Dietrich photo-book that he took to the shoot. As the Thin White Duke, his silhouette echoed Dietrich’s classic pose.

The question of how wide is the gap between persona and true self fascinates the public: who is she/he beneath the mask? Bowie turned this into a game to tease and enthral his fans, allowing them to collaborate in the process; when it came to Ziggy, Bowie said: ‘other people reread him and contributed more information … than I put into him.’ Influenced by kabuki theatre, which draws attention to its own theatricality, he declared: ‘I’m Pierrot. I’m Everyman. What I’m doing is theatre, and only theatre.’ However, his fans suffered the paradox of enjoying his determination to be indeterminate while also wanting to pin him down. They felt betrayed when, at the start of the AIDS crisis in the early 1980s, he dropped the theatrical veil, declaring himself a ‘closet heterosexual’. Later, he told Rolling Stone that coming out had stymied his US career, and later still redeclared himself bi once more. Personas gave both Bowie and Dietrich the freedom to push societal boundaries – until society deemed they had gone too far, and tore up their masks.

Jung argued that a persona could become pathological if an individual identified too closely with it. When a persona is shattered – whether intentionally or not – the result is disintegration, chaos, collapse. For Dietrich, the collapse of her film persona was imposed upon her by the Hays Code. Introduced to Hollywood in 1930, it dictated that ‘no picture shall be produced that will lower the moral standards of those who see it.’ As cinema became increasingly popular, concern about its messaging intensified, particularly among religious and Catholic groups. The Hays Code was drafted by a Jesuit priest, Father Daniel A Lord. It comprised a list of rules about sex and violence, and banned sexual ‘perversions’ such as homosexuality. Adultery should not be shown; childbirth was banned; and morals had to be present, like a watermark, in plotlines that should promote wholesome American values.

Even Bowie’s death was ‘a work of art’, his swansong album released just two days before he died

We often imagine that the complex screen roles for woman we celebrate today – the ‘hot mess’ that Phoebe Waller-Bridge plays in the TV series Fleabag (2016-19), or the blackly comic, murderous Cassie (played by Carey Mulligan) in the film Promising Young Woman (2020) – represent a new evolution, but the early 1930s were a golden age for rich female roles, notwithstanding cultural fears about the corrupting impact on female viewers: Dietrich and other female stars of her age were considered a box-office draw for women rather than men.

Until 1934, the Hays Code wasn’t strictly enforced. Then came the clampdown. The Production Code Administration office vetted scripts before filming, making suggestions to sanitise and simplify them, often to disastrous artistic effect. Queer characters couldn’t be shown as sympathetic, so they appeared as caricatures: drag queens, child molesters, villains or cowards.

Dietrich built her career as a seductive, mysterious, transgressive star with androgynous appeal, but now her films – and von Sternberg’s artistic vision – were fatally compromised. In The Devil Is a Woman (1935), she played Concha, a seductress, in a story of erotic bedazzlement; the script censors wanted to punish Dietrich’s sexy character, and suggested she become a ‘scrawny, impoverished hag’, and that her love interest could choke her to death in its finale. The film had to be cut from 96 minutes to 79, and the result was a terrible critical and commercial flop (though it later received critical recognition). Dietrich was labelled ‘box office poison’ in an ad that named and shamed Hollywood stars who’d lost their bankability. She made a comeback with the Western comedy Destry Rides Again (1939), where she consciously mocked her previous ice-goddess incarnation by playing a character who was likeable and down to earth – qualities she reprised throughout the 1940s but that lacked the complexity of her female heroines in the decade before. Then, in the 1950s, she reinvented herself once more as a glamorous cabaret star. Her final film, Just a Gigolo (1978), saw her sharing the screen with Bowie.

Dietrich spent her last decade shut away in her Parisian apartment, refusing to go out in public, so that her wrinkles and blackened teeth would not destroy the memory of her iconic beauty. Perhaps, as Jung warned, her obsession with persona became pathological.

She was the ultimate unreliable narrator, hiding her true sexuality and fictionalising parts of her life if it enhanced the legend. ‘Her whole life has been built on a grand illusion,’ Fritz Lang feared. Bowie lived his final days with more flair. His producer Tony Visconti remarked that even his death was ‘a work of art’, after Bowie’s swansong album, Blackstar (2016), was released just two days before he died.

As Wilde had observed in the essay ‘The Critic as Artist’ (1881): ‘Man is least himself when he talks in his own person. Give him a mask, and he’ll tell you the truth.’ Both Dietrich and Bowie were elusive legends but perhaps, as Wilde suggests, the shimmering personas they adopted give us glimpses of their truest selves.