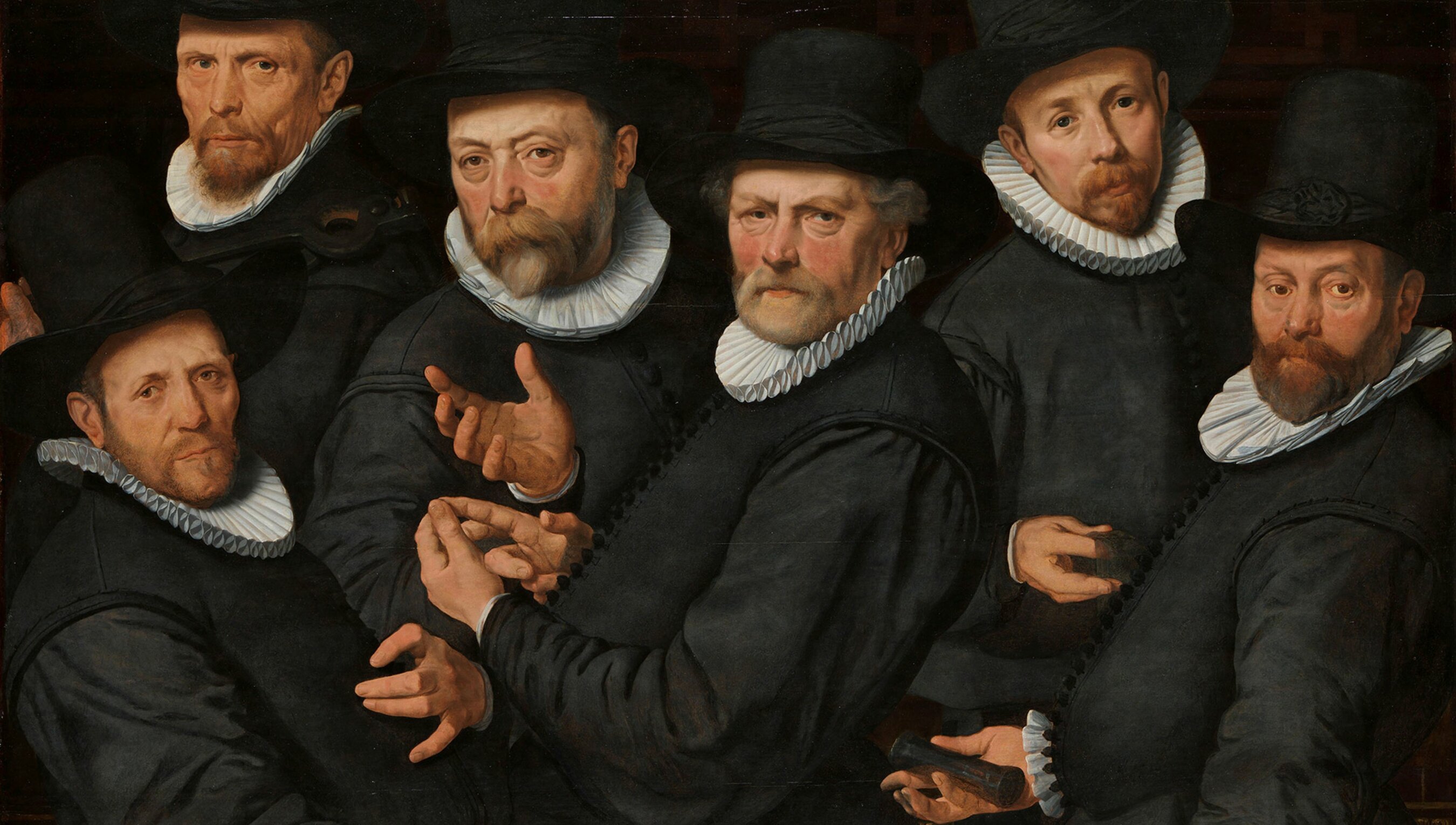 Six Wardens of the Drapers’ Guild (1599) by Pieter Pietersz the Elder. Courtesy the Rijksmuseum, Amsterdam

Leibniz had rules for standing out for all the right reasons

Six Wardens of the Drapers’ Guild (1599) by Pieter Pietersz the Elder. Courtesy the Rijksmuseum, Amsterdam

is professor of political science at Boston College in Massachusetts. His recent books include Our Great Purpose: Adam Smith on Living a Better Life (2019) and The Political Philosophy of Fénelon (2020).

The text that appears in the modern edition of Gottfried Wilhelm Leibniz’s collected works under the title Lebensregeln – literally, ‘life rules’ – is six printed pages. These reproduce a one-page manuscript that Leibniz left unpublished, and that its editors date to 1679. The piece is divided into six sections, and is written in three different languages (German, French and Latin), sometimes moving back and forth between these in the course of a single sentence. And often it doesn’t even use sentences at all, merely listing short phrases.

It’s not hard to see why the Lebensregeln isn’t well known today, even among specialists. But this is a shame. For, in fact, Leibniz’s life rules are full of good advice. And while they very clearly bear the mark of the ethical codes that dominated the court culture of late 17th-century Europe, much of Leibniz’s advice remains relevant. This is largely because Leibniz’s advice focuses on how a decent and thoughtful person can best navigate a world much like our own, one in which success and advancement often depend on the good judgments of others.

Speaking broadly, Leibniz’s rules fall into three basic categories: advice on how to communicate with others, advice on how to carry oneself with others, and advice on the sorts of subjects one ought to study. On the first front, Leibniz argues that effective communication requires us to engage our audience’s attention in such a way that others will feel connected to and included in our conversation. In this vein, we’re told that ‘small commonplaces’ that ‘can be told or recounted with flair’ get noticed. Later, we’re told we ought to ‘intermix some charm into business negotiations and meetings’, and that, in more casual conversations, we should make sure to give openings so that ‘every person recounts something’ and has an opportunity to speak their mind. The lesson here is that when we speak with others, we should ‘work to bring new things up’ in such a way that others are ‘drawn into conversation’.

When everyone else is preening and posturing, we earn the attention of others when we do the opposite

These maxims are interesting for at least two reasons. The first is that they come from Leibniz. Leibniz is famous for having argued that proper reasoning is based on ‘two great principles’: the principle of contradiction and the principle of sufficient reason. But the Lebensregeln attests to his awareness that even the best logical reasoning falls flat if it can’t interest people and draw them in. Second, and especially important for today’s world, Leibniz suggests that effective communication is both open and participatory, and creates an environment that allows the voices of others to be heard.

Leibniz’s rules on effective communication emphasise community and collegiality with others. But when it comes to how we ought to carry ourselves in public, things seem to be all about the self. Early on, we’re told that: ‘It’s an art to be able to draw the eyes of others to you in company.’ And in the fourth section of the piece (to which Leibniz gives the delightfully revealing title ‘Short Method of Standing Out’), he tells us just how this is best done. Here, Leibniz insists that we should in particular ‘strive to attain the notice and approbation of distinguished men’ – for example, by not talking too much (‘say only what is unique and unfamiliar to others, and extremely useful’), and not spending too much time alone (lest one ‘be taken for a man of contemplation, leading an exceptionally withdrawn life’).

But here, perhaps more than anywhere, Leibniz’s advice is especially relevant to our own world. We no longer go to court to try to get the king to notice us. But ours is yet, like Leibniz’s, an age dominated by the competition for attention: we just measure this by Likes on social media rather than smiles from a king. In this sense, Leibniz’s little set of rules for standing out beats to the punch by more than three centuries today’s industries of search engine optimisation and social media strategising.

Yet, for all that Leibniz goes further than we do, he shares our concern to attract eyeballs, and knows very well that doing this requires carefully curating the images one allows the public to see. But he also knows what we often forget: there is a real danger in such obsessive focus on appearances that conceal or distort reality. For this reason, he cautions that we shouldn’t focus exclusively on appearances, but rather ‘seek two things: to be and to appear’. His lesson is simple. We need to take care not just to appear deserving of the esteem of others, but actually to be worthy of the esteem of others. Tempted by incentives that encourage us to obsess about how we look, we run the risk of forgetting (or even no longer caring) who and what we truly are – unless, of course, we take care to develop rules for living that resist these temptations to artificiality.

Leibniz wrote for a world much like our world, one that valued getting ahead

If we want to stand out, what then should we do? Leibniz suggests we in fact need to do the opposite of what we tend to do. Today, we are often tempted to think that if we want to get noticed, we need to turn up the volume – Tweet more, and in ALL CAPS! But Leibniz knows that greater volume usually gets lost in the noise. To really stand out, we shouldn’t do more of what everyone else is doing, but rather do something different from what everyone else is doing. Thus, his counterintuitive advice: ‘Whoever wishes to stand out should display something singular; for example: humility, modesty, patience.’ When everyone else is preening and posturing, harried and hurrying, we earn the attention of others when we do the opposite – and when we do so, we may even be happier individually and more pleasant for others to be around.

With this we come to the third of Leibniz’s three categories. Having shown us how to speak and how to act, Leibniz also tells us what we should know. Here, as elsewhere, his advice is direct, and at times amusing. Among the things ‘necessary for everyone’ to know are foreign languages (Latin, French and Italian), useful arts (architecture, medicine, home furnishing and cooking), the polite arts (dancing, music and painting), sports (hunting, fowling and fishing), current affairs (European politics and world geography) and the arts of self-defence (‘to be able to defend oneself against insults with swords and firearms’).

Leibniz sounds like a finishing-school master, laying out the syllabus for instruction in the skills that provide entry to and movement in polite society. But even here there’s more going on. For not only does Leibniz insist that elites need to know the arts of high society, but that they need to know more fundamental things besides. This includes especially knowledge in the true sense, that which is ‘drawn out by art and method, by reflection, by discussion’. And one should not only ‘learn basic experiments’ but also ‘problems rather than theories’, and ‘the uses to which all things are directed’. In his published work, Leibniz also emphasised the uses of knowledge, insisting that, in fact, it was the responsibility of all enlightened people of good intention to strive to understand the Universe and its eternal and unchanging laws, as to do so would bring us not only closer to God but closer to others, promoting their benefit and advancement.

And here lies the main reason why Leibniz’s approach deserves our attention today. Leibniz wrote for a world much like our world, one that valued getting ahead. But he understood very well that self-interested striving can easily degenerate into selfishness if it’s not tempered by concerns for things that go beyond the self. It’s for this reason that his rules for living consistently emphasise that what matters isn’t just the self, but how the self relates to society. In so doing, he helps even the self-interested see that the real art of living requires learning how to balance the claims that our self makes on us with the claims that society makes on us.

All of this comes to a head in Leibniz’s reflections on what he calls ‘presence of mind’. Presence of mind, he explains, comes down to this: whether ‘one can find in the heat of the moment what one typically maintains in silence’. Leibniz knows that it’s no easy task to stay calm in a busy world, and even more difficult to remain oneself when out among others. Many of us today, I suspect, will nod our heads in agreement – and all the more so when Leibniz tells us that this, in fact, is ‘the most difficult skill’ of all.