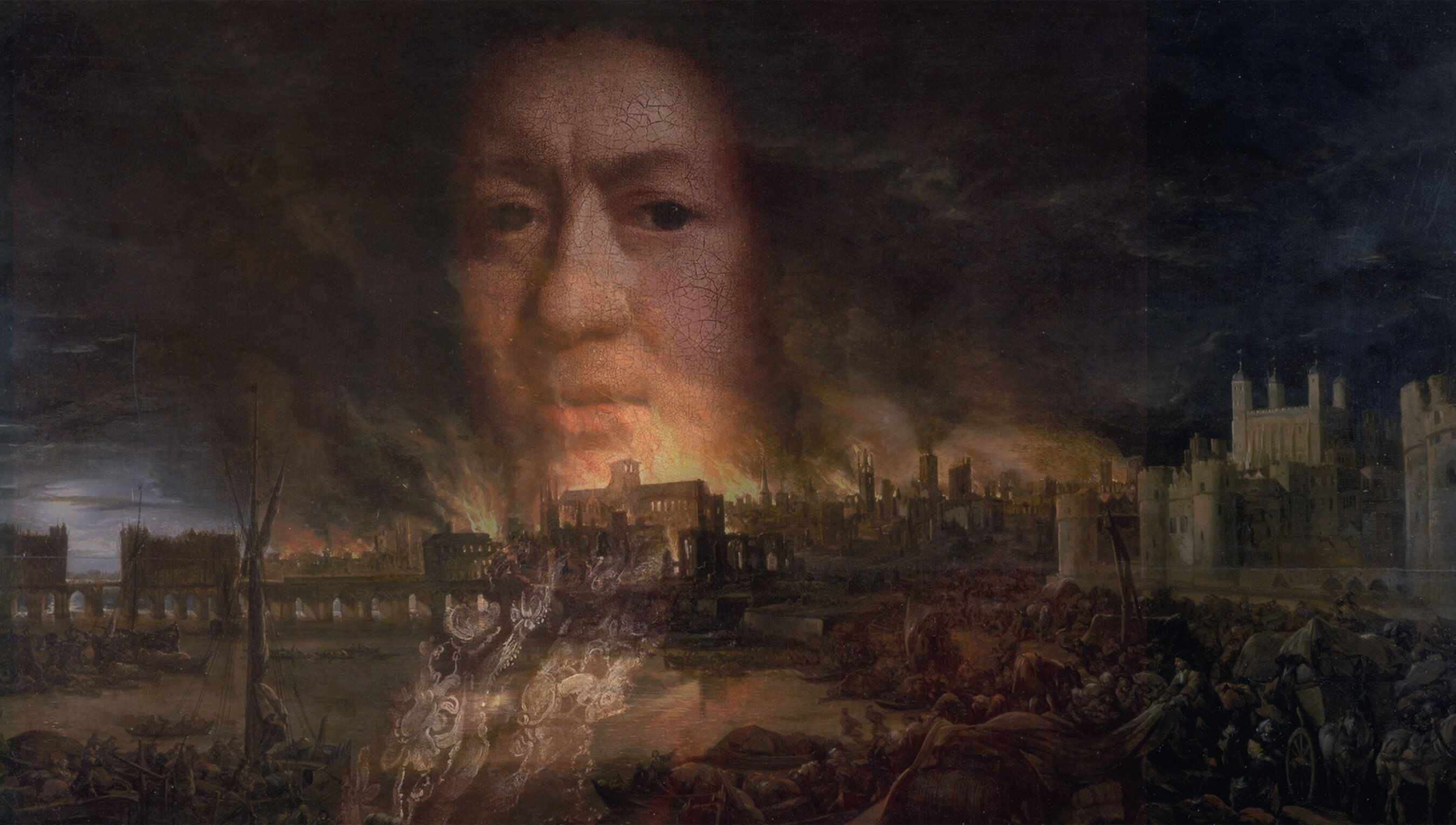 So far and no further: the philosophy of Samuel Pepys

On 6 January 1663, the diarist Samuel Pepys went with his wife Elizabeth, his brother Tom and friend or two to see Twelfth Night at the Duke of York’s theatre in Lincoln’s Inn Fields. It turned out to be an expensive evening:

Thence Mr. Battersby the apothecary, his wife, and I and mine by coach together, and setting him down at his house, he paying his share, my wife and I home, and found all well, only myself somewhat vexed at my wife’s neglect in leaving of her scarf, waistcoat, and night-dressings in the coach today that brought us from Westminster, though, I confess, she did give them to me to look after, yet it was her fault not to see that I did take them out of the coach. I believe it might be as good as 25s. loss or thereabouts.

I have found myself returning to this entry in Pepys’s famous diary over and over again; not because of what was written there, but because of what was not. ‘It was her fault,’ he writes – not I was angry at myself for having left these things in the coach and took it out on my wife, but ‘it was her fault’. It’s the perfect distillation, in one little episode, and half a sentence, of one of the characteristics of Pepys as a chronicler, and it has had me wondering ever since: what was this man’s philosophy of life? How in his diary does he structure the world, and how did he, as we all must, live with himself within it?

What was philosophy, in Pepys’s day? Short answer: he wrote at a time (the diary spans 1660 to 1669) when the word had a very big belt, which might encompass any number of different things, from a desirable level of education to a hopelessly outdated precept. Long answer: it meant this, the unpredictable acoustics of cannon-fire off Dover on 4 June 1666, perfectly audible in London, yet unheard in Dover itself, which ‘makes room for a great dispute in philosophy, how we should hear it and they not, the same wind that brought it to us being the same that should bring it to them: but so it is,’ Pepys writes, with still-tangible puzzlement.

It might be arcane, and suspect: ‘I was told, yesterday, that Mr. Oldenburg, our Secretary at Gresham College, is put into the Tower,’ he records on 25 June 1667, ‘for writing newes to a virtuoso in France, with whom he constantly corresponds in philosophical matters; which makes it very unsafe at this time to write, or almost do any thing.’

‘Here was very fine discourses and experiments, but I do lacke philosophy enough to understand them’

It was this, Robert Boyle’s Hydrostaticks, Pepys’s reading matter for the long, long pull down the river from Rotherhithe to Gravesend in July of the same year – ‘a most excellent piece of philosophy’.

It was a necessary if onerous grounding in thought, as here, on 8 April 1668: ‘like the old hypotheses in philosophy, it must be learned, though a man knows a better’, and one his brother John, for example, eight years Pepys’s junior, distinctly lacked: ‘I find him not so thorough a philosopher … as I took him for, he not being able to tell me the definition of final.’ (Tut-tut!)

And it was this, where perhaps we get closest to its personal meaning, to Pepys: an evening’s conversation in May 1669 between Pepys, the scientist Robert Hooke (or ‘natural philosopher’ as he would have been known at the time), and Lord Brouncker, in which they ‘discoursed of many fine things in philosophy, to my great content’.

It was comprehension, in other words, of the world and of oneself. Four years before, of a similar evening at Gresham College, Pepys had written sadly: ‘Here was very fine discourses and experiments, but I do lacke philosophy enough to understand them,’ which is even more revealing. But would he have admitted this anywhere other than his diary?

Pepys loved his diaries as only a writer can – as objects, first of all (who doesn’t love a new notebook?), ruling their pages himself and setting down each symbol of the shorthand he used for them perfectly spaced from the next, in enviably straight lines. But he loved them too, I think, as his loyal friends, perhaps even as what we today might call his therapy, a place where he could and did share any- and everything, unjudged.

He records like a camera, whether national disaster or the doings of his own bedchamber; it’s all there in the same grainy detail. No sooner did an impression strike him than it is worded and set down; from the zombie-like state of those few Londoners out on the streets at the height of the plague (‘looking like people that had taken leave of the world,’ he writes in a phrase that last year acquired a new and awful resonance), to the dereliction of Charles II in taking note of his kingdom’s peril in its war with the Dutch, or the rebellious state of its unpaid navy (‘I do not see the least print of care or thoughts in him about it at all’).

As with the scarf forgotten in the coach, he hits this stop in his accounting of himself and leaves it at that

You might describe the diary as a continual conversation Pepys has with himself, which brings us to a possible reason for him having begun it in the first place. The London of Cromwell’s Protectorate had been a policed, if not a police, state, and after Cromwell’s death it would have been no bad thing, as an ambitious young civil servant in all the chaos of early 1660 in Westminster (when no-one knew what would befall next – mob rule, army coup, even the restoration of a monarch) to have a record of what was said by whom and when to whom. You do get the impression from the diary that very often in his conversations with others, Pepys kept his own counsel, letting his companions do the talking. Meanwhile, in his diary, he can be as garrulous and scathing as he likes, recording cupidity on one hand, stupidity on the other, and human folly wherever you turn your gaze. One of the great crises of Pepys’s professional life was when in 1663 his kinsman and beloved patron, Montagu, took a mistress down in Chelsea, west London:

dinner with Creed [a colleague], talking of many things, among others, of my Lord’s going so often to Chelsy, and he, without my speaking much do tell me that his daughters do perceive all, and do hate the place, and the young woman there, Mrs. Betty Becke; for my Lord, who sent them thither only for a disguise for his going thither, will come under pretence to see them, and pack them out of doors to the Parke, and stay behind with her …

The italics are mine. Pepys went as far as to write Montagu a ‘letter of reproof’, detailing exactly how this liaison was damaging his patron’s standing; an act of great good sense and not a little courage. Yet when in January of the same year, in the ebb and flow of marital concord or its opposite, Elizabeth had done the same to him, putting down in writing her unhappiness and loneliness and suspicions, all eminently well-founded, of Pepys’s own infidelities, he was outraged, and tore up the letter in front of her. Did he see the hypocrisy in this? He sees her temerity, and the possible danger to him in having his faults set down in ‘a paper of so much disgrace to me and dishonour, if it should have been found by any body’, but does he then examine those faults, the cause of Elizabeth’s complaint? He does not. (Nor does he ask himself if her letter gave him the later idea of writing his own.) As with the scarf forgotten in the coach, he hits this stop in his accounting of himself and leaves it at that.

But this is exactly why Pepys is so fascinating to us still: not because of his value as an accidental historian, but because in his diary we watch him reflecting upon his days with such largesse and candour that he either doesn’t care or doesn’t see what he is saying of himself. Had he done so, perhaps there might have been no diary at all. Greater shame or deeper self-analysis might have stopped his pen altogether, but with Pepys it is that blind spot, that lack of ‘philosophy enough to understand’ that allowed the conversation with himself to carry on.

It’s telling, in this context, that Pepys ceased to keep the diary when it could no longer be ‘his’; when his fears for his eyesight made him think he would have to dictate it to another. Its value for him was in its one-to-oneness, this kingdom of words in which he was king. It is we, reading the diary today, who are given the in-the-round view of Pepys that he, diligently bustling through its pages day-by-day, so singularly and vitally and humanly failed to capture of himself.