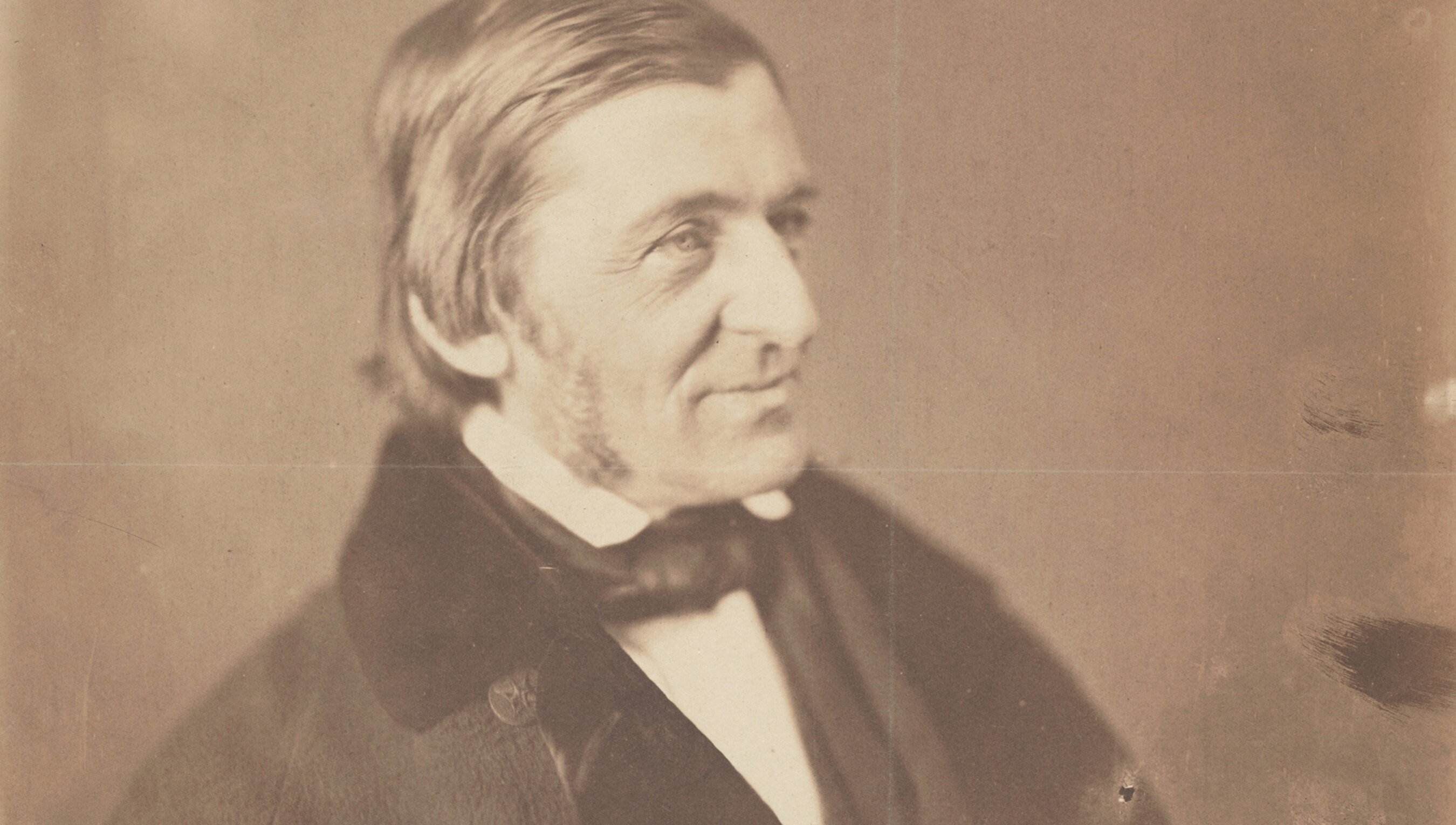 is an assistant professor of history at Princeton University. He is the author of Fighting for the Higher Law: Black and White Transcendentalists Against Slavery (2021). He lives in New Jersey.

We can’t understand Ralph Waldo Emerson the philosopher of self-realisation without understanding Emerson the radical abolitionist. In fact, his language and philosophy helped shape the contours of the antislavery movement in New England. As Bostonians’ dislike of slavery began to grow into active disobedience to the laws that supported it, many turned to Emerson’s ideas to understand their actions. This happened even as Emerson frankly disliked the insincerity and bad faith of many reformers – for whom moralism replaced an authentic character. Ultimately, through examples such as the militant abolitionist John Brown, Emerson came to celebrate a certain form of antislavery political activity, one that expressed heroic and authentic moral character traits and that could be experienced as resistance to the conformity to the marketplace.

In some of his earliest extant letters and journal entries, as a young man, Emerson expressed a hatred for slavery and wanted to see it abolished. It was in the 1830s, while he was coming to many of the philosophical and existential conclusions that would mark his Transcendentalist thought, that he first spent time with radical abolitionists. In 1831, he had surprised the buttoned-up parishioners in his Unitarian church by allowing abolitionists to address the congregation. In 1838, the leading abolitionist newspaper of the day, William Lloyd Garrison’s Liberator, republished Emerson’s letter protesting Cherokee removal, which he called ‘so vast an outrage’. As the conservative clergy in Massachusetts mobilised to condemn Emerson’s Transcendentalist movement, he often found himself allied with abolitionists, who also tangled with the religiously orthodox on questions such as church reform or antisabbatarianism. Importantly, as the 1840s progressed, Emerson began to spend more time with Black abolitionists. He was familiar with Frederick Douglass as early as 1844, he shared antislavery stages with fugitive slaves such as Lewis Hayden, and he encountered William C Nell, an activist and groundbreaking Black historian, in New England’s parlours, intellectual clubs.

Still, Emerson’s reputation in the public mind as an antipolitical thinker lingers. To be sure, in his contrarianism, Emerson often espoused an antimoralism, one that privileged individual authenticity rather than public displays of solidarity. Emerson was in some ways the mirror-opposite of some of today’s preening Left intellectuals; the Transcendentalist was almost embarrassed of his own political commitments, as if he hoped you didn’t notice the antislavery rallies he spoke at, the support he gave to abolitionist militants. He had an instinctive allergy to what he called the ‘rosepink sentimentality’ of reformers, preferring the smirk of an honest rogue to the scowl of a self-righteous prig. In essays such as ‘Self-Reliance’ (1841), he had accused some abolitionists of bad faith, of concealing their greed and ‘spite at home’ through a Mrs Jellyby-like ‘incredible tenderness for black folk a thousand miles off’. He saw how a moral crusade, maybe especially if it is so clearly righteous, can serve as an existential crutch for people, allowing them to fill the void in their souls with the applause that comes from cheap moralism. He would have hated your Twitter feed.

As a result, Emerson’s Romantic existentialism sometimes made him wary of abolitionists and other reformers. When his friend George Ripley started a commune at Brook Farm, outside of Boston, Emerson debated joining. Finally he demurred, writing to Ripley that ultimately he didn’t want to ‘put on your community the task of my emancipation which I ought to take on myself.’ It was a nearly perfect statement of how he sometimes contrasted political struggle with self-development. Part of his disquiet came from his, perhaps unfair, sense that the abolitionist leadership, particularly Garrison, were shallow people, contorting their personalities to meet a political goal. After meeting with Wendell Phillips and Garrison, Emerson took to his journal to offer a devasting critique of their inauthenticity:

I have always the feeling that they may wake up some morning & find they have made a capital mistake, & are not the persons they took themselves for. Very dangerous is this thoroughly social & related life.

So intent were these activists on making themselves efficient public mouthpieces for a cause, that they had no time to be a full human. They were ‘mere mouthpieces of a party, take away the party & they shrivel & vanish.’ They lived their lives, Emerson worried, as a means to a political end, not as something worthy of serious attention in itself.

Still, in 1844, with his address ‘Emancipation in the British West Indies’, Emerson had cast his lot with the abolitionists. Antislavery activists were thrilled: John Greenleaf Whittier tried to recruit Emerson to run for office with the Liberty Party, and the Concord philosopher soon became a regular presence at abolitionist rallies, helping to bring in audiences with his literary celebrity. As the Massachusetts senator Charles Sumner wrote to him in 1851: ‘You have access to many, whom other Anti-Slavery speakers cannot reach.’ Nell noted that Emerson refused to speak before segregated lyceums, publicly withdrawing from the New Bedford Lyceum when he discovered that it did not admit Black attendees.

So how did this happen? How did the antimoral existentialist become notorious as an abolitionist? The key is that Emerson distinguished authentic moral choice from the self-serving and safe moralism that was its pale imitation. While the moralist trades in a false coin, superficially embracing heroic moral qualities, but doing so to try to use political righteousness to import a false clarity into their anxious souls, there were some, such as Brown, who actually ‘believed in his ideas to the extent that he existed to put them all into action’. As Emerson and his friends began plotting resistance to the Fugitive Slave Act of 1850, they developed a language of authentic behaviour and heroism that could be mobilised against conformity with an unjust law. Eventually, the rhetoric and practice of New England abolitionism began showing Emerson’s influence.

Emerson had long worried about how the emerging industrial division of labour was forcing Americans into roles, reducing their capacity to live authentic and integral lives. People were taking on specialised employments ­– as clergymen, lawyers, mechanics or sailors – and beginning to think primarily through the demands of those employments. ‘The priest becomes a form; the attorney, a statute-book; the mechanic, a machine; the sailor, a rope of a ship.’ People seemed indistinguishable, in other words, from the tools they used. Religious or moral considerations took a back seat to their professional roles. Markets made people into specialists, rendering them divided and inauthentic, and the resulting division of labour produced shrunken and limited thought. The attorney or the merchant no longer thought like a human being – weighing moral and existential questions with the seriousness that they demanded – but reasoned from the confines of what was good as a lawyer or cotton trader. Privately he wondered whether leading abolitionists were also playing a role, that they ‘had only a platform­-existence, & no personality.’

A new type of abolitionism was developing – heroic, autonomous and nonconforming – that Emerson had helped to create

The central turning point for Emerson was probably the Fugitive Slave Act. The act required Northerners – particularly policemen, judges, jurors and attorneys – to participate in the rendition of fugitive slaves. Historians are increasingly becoming aware of how interlinked were Southern slavery and Northern capitalism. But to Emerson the problem was not so much material as it was moral: the market, by tying people to a career and profession, was destroying their ability to think in any sort of morally authentic way – to ‘Reason’ in his Romantic language, rather than use mere ‘Understanding’ – and thus was leaving them susceptible to the pressure of the Southern slaveholders. The State Street merchant who traded in Southern cotton, the Boston policeman who arrested a fugitive… both were excellently performing their roles as merchant and policeman and for that exact reason were blinded to how they were being used for a terrible injustice. As his friend Henry David Thoreau declared, people like this ‘are just as much tools, and as little men’.

Soon abolitionists began sounding like Emerson. Theodore Parker, who helped lead the main organisation dedicated to protecting fugitives in Boston, wrote of those who followed their official duty rather than their moral duty that ‘he is no longer a man, but a mere president, general, governor, representative, sheriff, juror, or constable.’ Sumner resigned his position as a US commissioner – as did one Joseph Hayes, a captain in the Boston police – rather than be asked to return a fugitive slave. The social reformer Thomas Wentworth Higginson – who later became the mentor and editor of Emily Dickinson – wrote a letter to an old boyhood friend, then serving as a US commissioner, pleading with him to resign or violate the new law: ‘can you as a man with a reason, a conscience, and a heart become what the law calls on you to become – the paid tool of another’s injustice and cruelty.’ A ‘tool’, the abolitionists’ favourite insult for someone who followed the law, was, of course, something that is used by another, something that cannot think for itself. Policemen and soldiers could be tools, but so, Emerson thought, were a growing number of intellectuals: ministers, editors and professors who repeated others’ words and inherited dogma without any critical thought of their own.

In the secret societies dedicated to violating the Fugitive Slave Act, a new type of abolitionism was developing – heroic, autonomous and nonconforming – that Emerson had helped to create and that he could admire. He began to celebrate abolitionist heroes such as Toussaint L’Ouverture, Elijah Lovejoy, the Boston Vigilance Committee (which had recently killed a US marshal while attempting to free a fugitive slave). It was, above all, Brown, the half-crazed revolutionary committed to fomenting a slave rebellion in Virginia, whom Emerson venerated. These figures, in Emerson’s mind, shared a certain heroic commitment to individual autonomy, a rejection of the bourgeois virtues of prudence and expediency, a rebellion against the given world. Above all, they were willing to transcend the demands of society and role, to see themselves as self-created moral agents. Brown did not act or see the world primarily as a wool merchant (he was pretty bad at that); instead, he sold wool in order to finance his moral actions.

As the Civil War approached, then, Emerson had overcome any reservations he once had about the reformer mentality. When Brown was caught and executed, Emerson’s declaration that Brown would ‘make the gallows as glorious as the Cross’ was widely reprinted throughout the press, both by supporters and by outraged conservatives, and played a significant role in making Northerners feel that it was acceptable to embrace the executed martyr. After their father was executed, two of Brown’s children – Annie and Sarah Brown – even boarded with the Emerson family. Where he had once worried that a friend had ‘ceased to be a man that [he] may be an abolitionist,’ he now saw that Brown had proven that being an abolitionist could make one a ‘man’, an authentic moral agent.