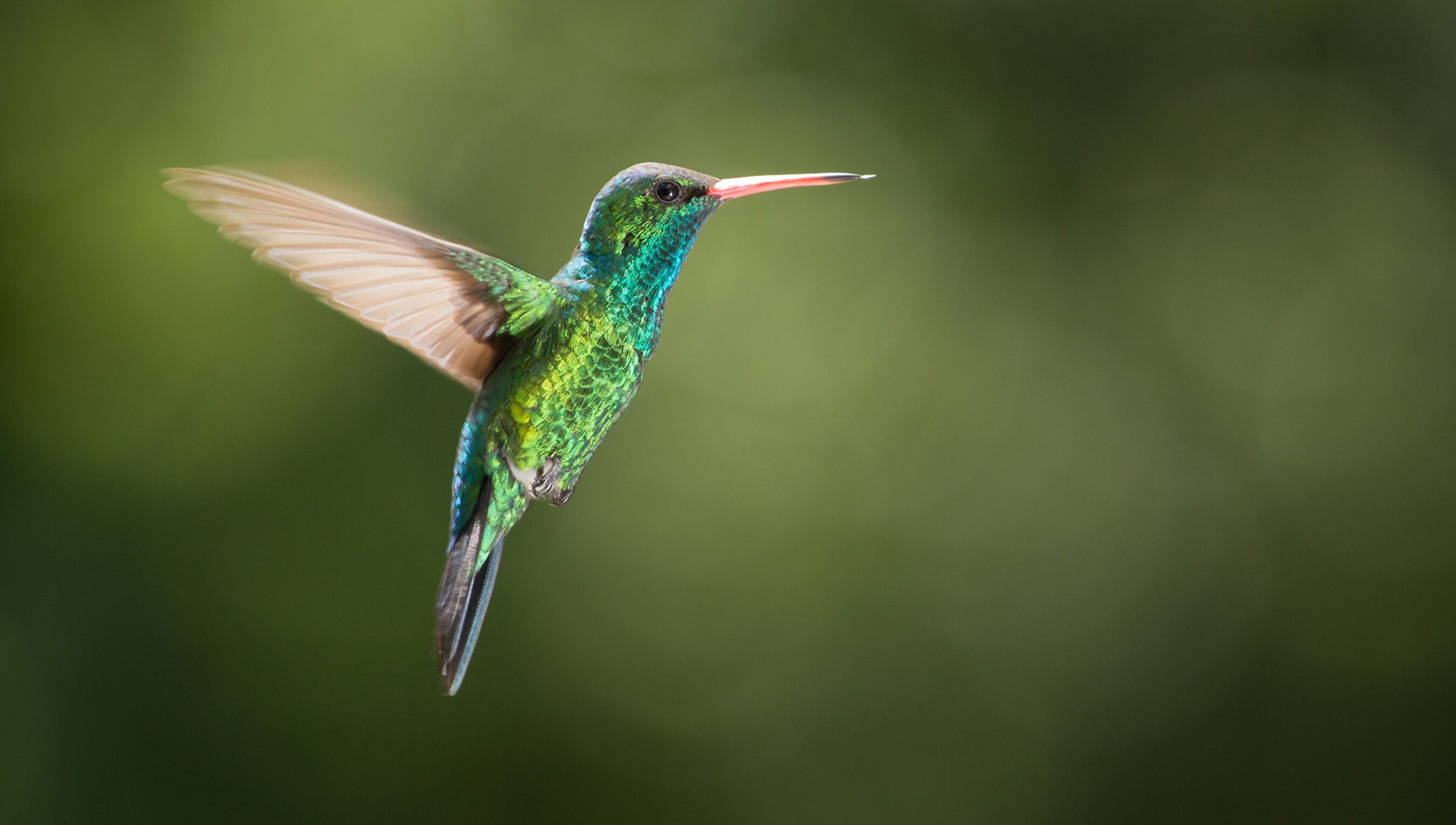 A vast, thrilling world of nature unfolds outside of human time

In the seconds that it takes to leave home in the morning, my garden in Ohio is exploding with invisible movements: a fusillade of spores bursts into the air from microscopic fungi that have sprouted on rabbit pellets since sunrise; leafhoppers jump from the car roof using gear wheels that engage faster than the pistons in the car; and tiny relatives of jellyfish called pond hydras fire barbs into their prey using pressurised harpoons. Does any of this matter to us? On one hand, we do not need to know that this Lilliputian circus is in full swing to drive to the office; on the other, life on this pale blue dot would cease without the workings of biology fast and biology small.

As humans, we often experience the present second by second: closing our eyes to maintain a blissful sensation a little bit longer or, more often, waiting for time to get a move on while we stand in line at the supermarket or wait with trepidation in the dentist’s chair, willing ourselves into the future. While seconds might be accessible, though, whole minutes are elusive. We note their passing as soon as they have gone, rather than accompany them in their flow. Longer intervals are likewise remembered rather than encountered, glimpsed like towns receding in the rearview mirror during a road trip.

Our abridged temporal reality runs on neurological circuits that meet our biological need to make decisions from one second to the next. Faster events can prove lethal, but natural selection has not seen fit to engineer a behavioural response that would allow us to outmanoeuvre a bolt of lightning, a cobra strike, or a barb from a stingray. Evolution spends its time instead on working on the avoidance of more common causes of youthful demise – which leaves us riveted to seconds rather than microseconds or minutes. Consequently, we’re detached from most of life, and ageing with little awareness of our passage through time. John Milton conveyed the problem with customary elegance in an early sonnet in which he cast time as ‘the subtle thief of youth’. That subtlety is everything. Clocked when our attention is on it, time slips ahead when life shakes us from its contemplation.

One second is divided into 1,000 milliseconds or 1 million microseconds. Microseconds are as good as invisible to us, but we are attuned to movements that occur in a few milliseconds. In fact, the brain identifies visual stimuli separated by as little as 3 milliseconds. Hummingbirds beat their wings 50 times per second, which means that a full up-and-down sweep is completed in 20 milliseconds. This puts the motion of their wings at the edge of our awareness: the body of the hovering bird is sharp, while its wings fill blurred triangles. Looking at something faster, we notice the disappearance of a cat’s flea from one position and its seemingly instantaneous reappearance a pillows-breadth away across a white bedsheet. In fact, a circus of hundreds of fleas could jump in quick succession, one after the other, in the time that elapses during an eye blink.

Human sensitivity to sound and to touch resides in roughly the same timeframe as vision, with 2 millisecond audio bursts or needle-pricks making an impression on our consciousness, and shorter stimuli escaping notice. The overlap between these senses is not surprising, because the mechanisms that underlie all forms of irritability run on the same nervous hardware.

Extending the timescale beyond humans, sunrise and sunset happened long before we understood that Earth was rotating, rather than staying put and allowing the Sun to fling itself about us every day. Mention of the cosmos is significant in this biological exploration of time, because a glimpse of the richness of nature lived in a single second is every bit as powerful as the awe we might feel when we look at the Milky Way. ‘If the doors of perception were cleansed every thing would appear to man as it is: Infinite,’ in the words of William Blake. A slow-motion video recording of a dragonfly rowing the air on its stained-glass wings is as thrilling as a solar eclipse.

Our hearts beat every second, and, elsewhere in the body, fluids ebb and flow to the same meter in the lymphatic and nervous systems. Bowel movements and orgasms obey similar pulse rates. Waves of much faster biochemical reactions control these second-by-second bodily fluxes, which illustrates the way in which we are swept into the future by the totality of natural mechanisms that traverse multiple timescales. Many of the behavioural programmes followed by animals are sustained for minutes and hours, and we have adopted hours as the main time intervals in our schedules.

Daily or circadian rhythms are layered over the hours, and lengthier processes that depend on the accumulated effects of these activities orchestrate the life cycles of many animals, plants and microbes. When sunlight bathes a forest of giant kelp, the flattened blades of these magnificent algae elongate by half-a-metre per day. On land, bamboo canes extend almost twice as fast, emitting an audible strain. With the passage of months, seasonal changes in plant growth are evident in a cycle of greening that washes over the northern and southern hemispheres. We mark months as they come and go but sleep through one-third of our lives and stay focused on the experiences of our conscious minutes or hours.

The migration of large herbivores; the winter hibernation of animals in cold climates; the growth of annual plants and the pests that pursue them – each of these is a natural performance, repeated every year according to a circannual cycle. Events that repeat over multiple years are less common in nature, but the 13- and 17-year periodical cicadas of North America provide a spectacular demonstration of the way that development can be choreographed over these longer time periods. Cicadas spend most of their lives as underground nymphs, feeding on tree roots before emerging for a few weeks to electrify the tree canopy with their shimmering mating calls. The offspring of the 17-year brood that departed in 2004 sang in my garden this summer. I wonder if I will hear their children in 2038, before I fertilise the soil for the 2055 generation?

Human life might stretch over decades, but the lifespans of many other organisms leave us in the dust

Natural processes that appear to have some predictability or periodicity over decades emerge from underlying circadian and circannual cycles. Water bears, or tardigrades, are exceptionally resilient creatures that survive heating and freezing, intense radiation, high pressures, and tissue dehydration inside a vacuum. They do not live for more than a year or two when they’re active, but their ability to resurrect themselves after drying out extends their lifespan to match much larger animals. Similarly, lungfish can survive drought by encasing themselves in mucus cocoons, and so live for many decades. The biology of these animals offers an interesting contrast with the human programme of continuous activity. The oldest among us live for 3 billion seconds, controlled by genes that are the most recent versions of DNA instructions that have been touring Earth for 3 billion years.

As the seconds tick by, human life might stretch over decades, but the lifespans of many other organisms leave us in the dust. Giant tortoises and deep-sea orange roughies prosper long into their second centuries. A 200-year-old bowhead whale caught by Native Alaskan whalers in 2007 had the point of a 19th-century metal harpoon embedded in its tissues. Greenland sharks that swim slowly in the frigid water of the Arctic Ocean live twice as long as bowheads. The age of these sharks has been verified by dating their eye lenses using radiocarbon techniques, based on a spike in radioactivity for animals born after nuclear weapons-testing began in the 1950s. A large edible clam called the ocean quahog filter-feeds from Icelandic waters for five centuries, and black corals and sponges live for millennia. The colonies, or mycelia, of fungi that produce mushrooms can expand through forest soils for thousands of years; other fungi that partner with algae to form lichens have been growing on Arctic rocks since the Neolithic era.

Many trees outlive humans – including the bristlecone pines of California, Nevada and Utah, whose gnarled trunks twist themselves from the dry soil for 4,900 years or more. Trees with much longer lifespans, including the quaking aspens of Utah, develop as colonies of plants that interconnect through their roots. Single aspen stems do not live much longer than us, but the supporting colonies expand for tens of thousands of years. Colonies of Mediterranean seagrass are even older. All this raises the possibility that there is no inherent limit to the lifespan of some plant species if their environments remain stable.

It’s possible to see evolutionary changes over short time periods, particularly for viruses and bacteria. But when we think about big changes in biology, including the transformation of marine species into land animals and vice versa, we must look at the deep history of groups of organisms over many millions of years. Turtles left dry land and freshwater habitats to splash into the sea at least four separate times over the past 260 million years. The 8-million-year rise of whales from hoofed mammals related to the hippopotamus was a more recent and very speedy metamorphosis.

Shifting the spotlight from millions to billions of years, we intersect with the origin of life itself, the creation of our solar system, and the history of the Universe. The passage of time on this universal scale challenges our comprehension as much as the movements that are over in a microsecond. It’s plausible that microorganisms arose as soon as the physical conditions on Earth allowed precursors of biomolecules to remain stable. This quickened view of life is supported by the discovery in 2017 of ruby-red tubes of haematite, or iron oxide, which might have been produced by bacteria more than 4 billion years ago. Once the first cell, or protocell, began replicating, a founding population of microbes could explode on an uninhabited planet. Life would then begin changing according to the all-pervading laws of natural selection. The same mechanisms could perhaps spawn life across the Universe, wherever and whenever the geology is permissive.

The importance of fast events within the immensity of time brings the enquiry full circle. The flea jumps swiftly, reproduces, and can live for a few months. Its little armoured body is made from atoms that originated in exploding stars, and its origins can be traced to the first insects, and backwards in time, all the way to the first cell. Individuals and their species come and go, whole groups of organisms rise and fall, as the planet churns and quakes. The cell has remained the irreducible unit of life for 100 quadrillion seconds, modified into bacteria and crawling amoebas, and multiplied into bristlecone pines and the bodies of whales. It will persist until the Sun runs out of fuel and melts the biosphere, returning Earth to the purity of its geological beginnings.

Nature and the environmentAnimalsLife stages
19 October 2021