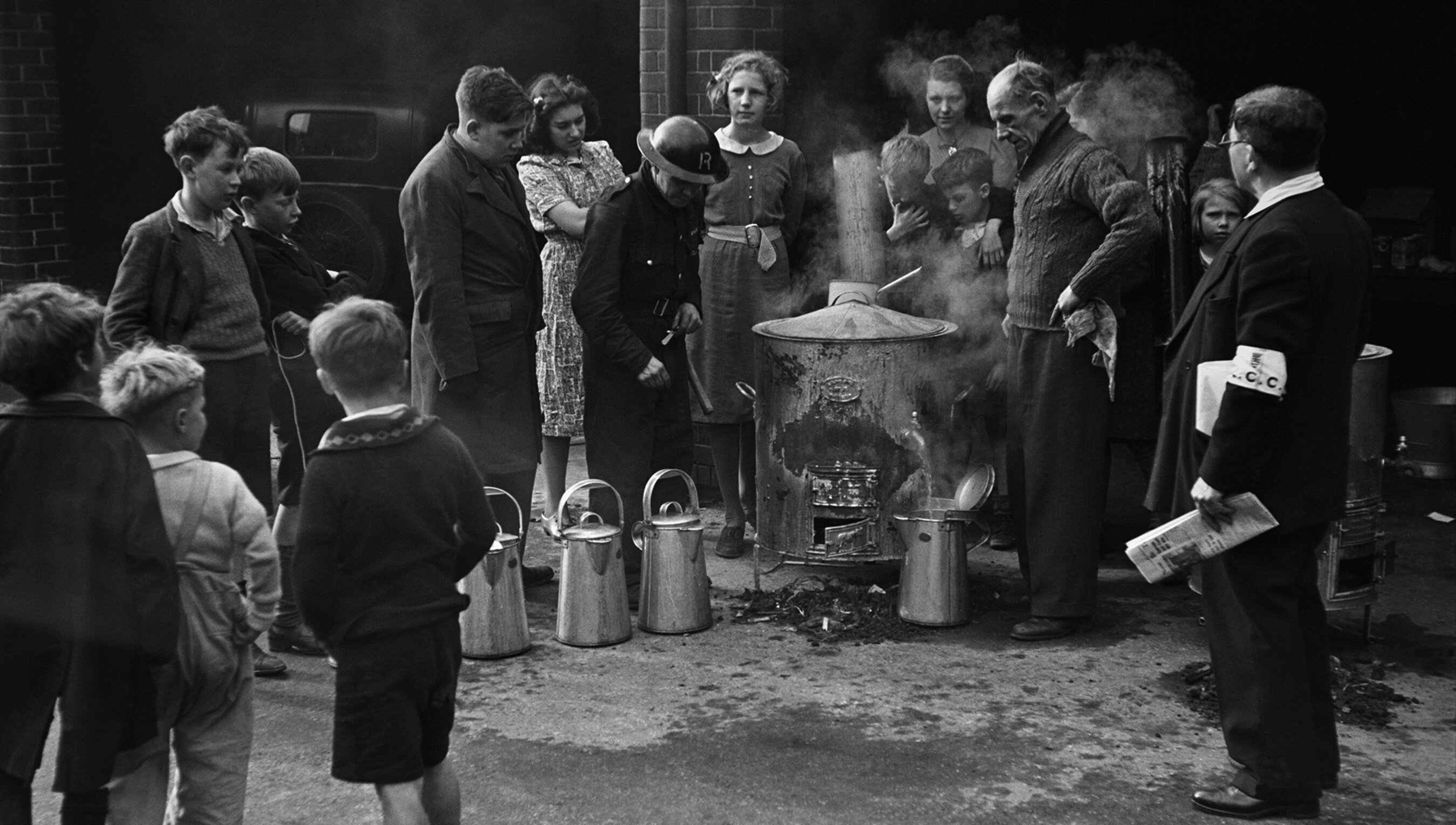 A temporary food canteen in a public shelter during the London Blitz of the Second World War in 1939-40. Photo by George Rodger/Magnum Photos

A temporary food canteen in a public shelter during the London Blitz of the Second World War in 1939-40. Photo by George Rodger/Magnum Photos

is professor in the history of medicine and psychiatry at King’s College London. He has studied the psychological effects of modern war and conflict, exploring how people cope during periods of intense stress and the impact of traumatic experiences on their wellbeing.

As the COVID-19 pandemic unfolded, the novelty of the virus and the absence of a vaccine meant that, across entire communities, no one could feel immune, nor could they know what would happen should they become infected. The social distancing and lockdowns that followed reduced rates of infection but also brought loneliness, loss of employment and distress to many. Amid this disruption, community members made determined efforts to stay connected with and support one another. While the long-term impact of the pandemic on peoples’ mental health remains unknown, it already provides a vivid example of how we respond to situations of collective risk and uncertainty – and how a sense of belonging and common purpose can contribute to resilience.

The pandemic is just the latest and most sweeping of episodes in which whole populations have been exposed to a threat against which there is no certain protection. When Britain was menaced by aerial bombing during the Second World War, the only sure protection would have been a deep-shelter system. In 1939, the British government ruled this out – partly on grounds of cost, but also because they believed that morale could be preserved only if people were offered equal safeguards in areas of similar danger. Further, the authorities were concerned that absolute physical safety would foster psychological vulnerability. Repeated bombing of cities, destroying homes and businesses, might create a ‘deep-shelter mentality’ such that people would be reluctant to leave underground bunkers when raids came to an end. In an extended conflict, resilience had to be nurtured and managed to extend its life.

Scientists were recruited to explore ways of encouraging people to habituate and adjust to the new risks. Studies conducted during the London Blitz showed that people preferred to remain in their homes rather than go to public shelters, even though this choice usually increased the danger. Responding to peoples’ wishes, the government manufactured the Morrison shelter, a steel cage that accommodated two adults lying down and doubled as a table during the day. To minimise the loss of vital war production, underground shelters were constructed within factories, and an early warning system was established so that work could continue until the bombers came close to their targets.

Other, less concrete protective factors were also identified. Following the First World War, Wilfred Trotter, a surgeon with an interest in crowd psychology, had written on the value of bonding into groups. In The Instincts of the Herd in Peace and War (1916), he identified the importance of homogeneous groups for buttressing resolve, a finding intuitively understood by armed forces of the time. For civilians without such a shared identity, Trotter suggested that their variety and differences could be offset by finding practical roles for them to create a common sense of purpose. In this spirit, during the Blitz, people coped by actively engaging in their own defence. Everyone was required to observe the blackout, a nightly routine of blocking out light from doors and windows, designed to conceal the location of urban settlements. Each individual act protected the community, enhancing the sense of belonging and shared adversity. In addition, the British government offered a range of voluntary or part-time roles: Air Raid Precautions (ARP) wardens, special constables, fire watchers, or membership of the Auxiliary Fire Service, the Home Guard, St John Ambulance and the Women’s Voluntary Service for Civil Defence (WVS). Purposeful activity empowered civilians and gave them a feeling of fighting back together. One can compare these forms of engagement to the recent social distancing measures and mask-wearing adopted by community members and governments to inhibit the transmission of the COVID-19 virus.

During the Blitz, people living in towns exposed to bombing could draw on social networks and communal activities for emotional support and practical assistance. Inhabitants gathered in pubs, theatres and dance halls despite the dangers of being in a confined space, while cinema attendance rose throughout the war. Tom Harrisson, an anthropologist and a founder of Mass-Observation, who was contracted by the government to report on civilian morale, wrote in 1940 about how distressing it was to feel that ‘every bomb is personal’. Feeling part of a larger community that shared the same dangers could offer a sense of reassurance. In 1941, William Sillince, the British Punch cartoonist, published a collection of his drawings entitled We’re All in It, reflecting the common experience of the British people subjected to air raids, rationing and the threat of invasion.

Modern-day terrorist attacks, designed to frighten the civilian population so that they abandon their routines, also underscore the need to feel part of a protective community. In the immediate aftermath of the terrorist bombings in London on 7 July 2005, a study led by the psychologist James Rubin found that a third of Londoners interviewed reported a substantial level of stress. Three-quarters of those interviewed had attempted to contact immediate family members or friends during the morning of the bombings. Such was the volume of calls that the mobile phone networks crashed. Actions like these indicate the importance of personal bonds not only for reassurance but to buttress resolve in times of uncertainty and threat. The need for a sense of belonging and comradeship is further evident in spontaneous and organised memorial events – such as the laying of flowers at the site of attacks and massed gatherings to mark those killed by terrorists, as occurred after the Manchester Arena bombing in May 2017.

For communities subjected to terrorism, it is often difficult to create voluntary roles that individuals can undertake to give them a sense of belonging and purpose. This is, in part, because terrorist attacks appear to the public as unpredictable or random. With uncertainty surrounding what form terrorism might take and when, governments issue generic advice, such as the ‘Go in, stay in, tune in’ wording of the Home Office pamphlet delivered to all UK homes in 2004, the official announcements broadcast on radio or television or, more recently, the slogan ‘See it. Say it. Sorted’, which urges citizens to remain vigilant and do their part by reporting suspicious behaviour in public places.

During the COVID-19 pandemic, many of the social and community resources readily available to civilians in wartime Britain and during other crises – from social outings to traditional mourning ceremonies – were denied by lockdown. Yet in the UK and elsewhere, people found other ways to maintain a sense of community, such as video-based social events and ritual clapping for hospital staff. A government-promoted effort recruited volunteers to help with shopping and other errands for vulnerable neighbours who were self-isolating, and attracted widespread support. Retired healthcare professionals and police officers came forward to undertake frontline duties. A study of adherence to social distancing in 10 cities conducted in April 2020 concluded that an important belief driving compliance was encapsulated by a Blitz phrase: ‘the belief that “we are all in it together and we all need to come out of it together” – a sense of common fate, a shared identity, and acting for the common or the social good’.

Social identity theory suggests that people develop a sense of who they are by reference to groups, both those to which they feel they belong and those toward which they feel antipathy. Research backs up the idea that people are more likely to offer support to their in-group – the people with whom they share a salient social identity, such as one based on geographic proximity or a common interest. While class-based and other social divisions do not vanish amid collective crises, the existence of a common enemy might serve to widen the range of in-groups to whom people feel they belong, and encourage comradeship among those facing the same threat.

In the aftermath of the Second World War, Londoners who had faced sustained aerial bombing were often heard to remark how they missed the comradeship and supportive behaviour of the war years. Indeed, in 1943, Joseph Goebbels, Germany’s minister of propaganda, had acknowledged the British government’s success in lionising stoical determination during the Blitz and making ‘a legend of London’ to counter feelings of despair.

Resilience operates at the level of individuals, small groups and entire communities. It can be generated by people themselves and also encouraged by institutions and governments. Yet as the Blitz and other collective crises have taught us, resilience is not a given and has to be managed with an understanding of peoples’ fears and wishes, including their need for connectedness.