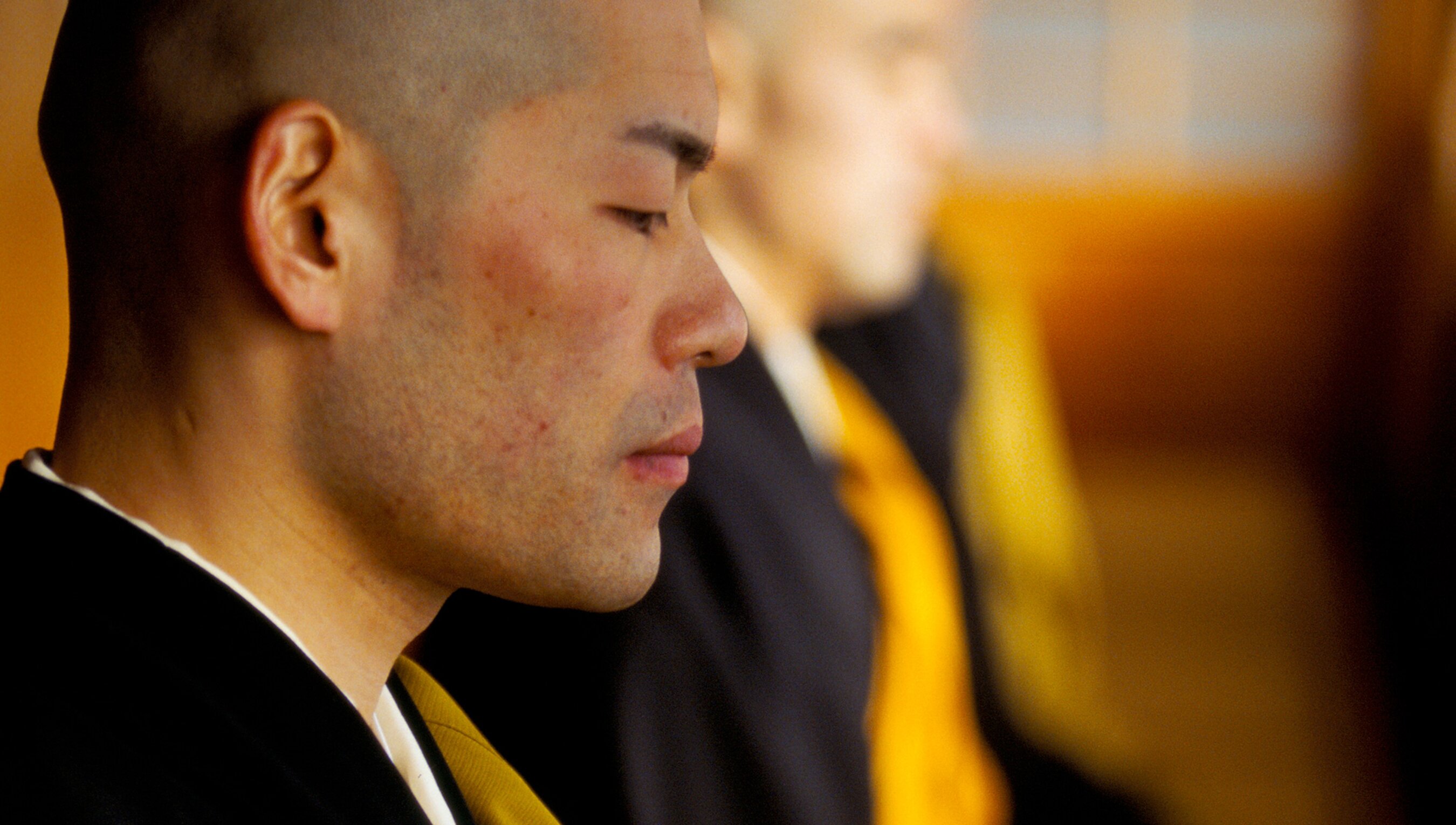 Zen monks of the Soto school meditating at the Seiryu-ji temple in Hikone City, Japan. Photo by Stuart Freedman Corbis/Getty

How an intense spiritual retreat might change your brain

Zen monks of the Soto school meditating at the Seiryu-ji temple in Hikone City, Japan. Photo by Stuart Freedman Corbis/Getty

is the director of research at the Marcus Institute of Integrative Health and a physician at Jefferson University Hospital in Philadelphia. He has published more than 250 peer-reviewed articles and chapters, and is the author or co-author of several books, including How Enlightenment Changes Your Brain (2016) and Brain Weaver: Creating the Fabric for a Healthy Mind through Integrative Medicine (2021).

Imagine spending a week or even a month in a secluded part of the world, away from all distractions, and focusing your mind only on your inner values and beliefs. Every day, you would meditate or pray, walk in the woods, eat the most natural foods, and strive for some type of intense spiritual or mystical experience. If you are religious, you might be engaging in a particular type of prayer exercise and trying to connect with God. If you are not religious, it could be meditating in silence, trying to connect to the fundamental level of the Universe. There are many different types of spiritual retreats, from traditional religious programmes to modern holistic approaches, and they usually involve intensive and immersive practices focusing on taking your mind or consciousness to an extraordinary kind of experience.

If you have ever had an intense spiritual experience, or if you are on a journey to find one, it’s possible that you have taken part in some type of spiritual retreat programme. These programmes, and practices such as meditation or prayer more generally, can have profound effects on the individual. And this means that they can have a profound effect on the brain. The puzzle is to figure out what produces major spiritual or enlightenment experiences, which are much more intense than our everyday experiences and – whether they last a long time or only briefly – can result in a powerful personal transformation.

Insights from the field of neurotheology can help us better understand how intense spiritual experiences affect the brain and might ultimately help people figure out the best ways of having them. Over the past 25 years, I have been involved in a number of neurotheological research projects designed to investigate the nature of spiritual practices and the experiences of enlightenment that arise from them. We have scanned people’s brains as they perform practices from diverse traditions, from various forms of meditation and prayer to speaking in tongues and entering trance states.

In addition to brain scans, we have also performed survey studies in which we have obtained detailed descriptions of these experiences. The participants come from virtually every spiritual tradition, and their descriptions provide important information about the cognitive and emotional elements of the experiences – data that can be combined with what we have learned from our brain scans.

Based on an analysis of approximately 2,000 descriptions provided in an online survey, we have found that five elements seem to be common across many enlightenment experiences, whether they occur during spiritual retreats, daily meditation or prayer practices, psychedelic experiences, or even spontaneously. Along with our brain data, these elements help to create a picture of what is happening both subjectively during these experiences as well as objectively in the brain:

Enlightenment experiences are commonly considered to be the most intense experiences that a person has ever had. The sense of intensity can be associated with feelings such as love, joy or awe. A 43-year-old male study participant, who had a profoundly affecting dream following a period of meditation, stated:

I, as an un-namable but individual being, was travelling down an infinite rollercoaster like waves of pure white ecstatic light. The ecstasy was overwhelming, and rose and fell in intensity with the waves of light. The light path seemed infinitely long in both directions. The sense of the being and the light was INFINITELY MORE REAL than anything I had ever experienced.

The intensity of these experiences is likely associated with increased activity in the limbic system, the brain’s primary emotional centre. Intensity is exactly what these areas of the brain register for us as they label various thoughts and experiences as being emotionally important.

A sense of oneness or unity

During the experience, the person feels a profound sense of connectedness with the rest of humanity, God or the Universe. We have found evidence that the sense of unity is associated with a decrease of activity in the parietal lobe of the brain. The parietal lobe typically takes sensory information and helps us to create a spatial representation of the self. Thus, a decrease of activity in this area could be related to a loss of the sense of a discrete self, a blurring of the boundary between the self and the rest of the world, and ultimately a feeling of oneness or unity. We have observed such decreases in the parietal lobe in our brain scan research on deep meditation.

Long-term meditators have altered function in the thalamus, which we think is associated with the sense of clarity

A sense of clarity

People feel as if a veil has been lifted and that they are now seeing and understanding the world in ways they never have before. The sense of clarity, which occurs during the experience but can last long after it too, helps them to feel as if they have gained new insights into themselves and how they are to act within the world. A 37-year-old scientist said this about her experience, which occurred during a time when she had been meditating daily:

Everything in life seemed to click. I had this clarity and it was as if I was looking at life from the inside out. Despite my trepidation, this experience seemed to satisfy my proof-oriented mentality … It was almost as if my intuition from somewhere ‘deeper’ had offered some sort of direct experience that offered up proof.

An area of the brain that might be particularly related to the sense of clarity is called the thalamus, a central structure that connects various parts of the brain to each other and could be very important for establishing our consciousness. Our brain scan studies have found that people who are long-term meditators have altered function in the thalamus, which we think is associated with the sense of clarity that is part of these experiences.

A sense of surrender

Most people describe enlightenment experiences as happening to them rather than as something that they made happen. Even individuals who go through intense meditation or spiritual retreat programmes still find that they are ultimately ‘going along for the ride’ when the experience actually happens. A 48-year-old Catholic woman described it like this:

I surrendered everything, including my faith and my salvation, and only for one reason. I loved God so much that I would truly give up everything to be connected with Him. I said ‘yes’ and, in an instant, God returned everything to me, transformed. From that day forward, a new relationship exists between God and me. It is ever present, no distance, no separation.

Our brain scan studies suggest that a sense of surrender is related to decreased activity in the frontal lobes. Frontal lobe activity normally increases during meditation or prayer because we are purposefully engaged in the practice. However, during the most intense of these experiences, we are likely to see a decrease in activity in conjunction with a loss of the sense of purposeful control.

Transformation as a result of the experience

Various aspects of one’s life can feel changed by the experience, including mental health, physical health, sense of meaning and purpose in life, sense of spirituality and sense of religiousness. It is not fully clear how such transformation occurs during these experiences, but brain scan studies have documented differences in the brains of long-time meditators compared with non-meditators. Of particular interest is increased activity and thickness in the frontal lobes. This might occur partly as a result of the concentration aspect of spiritual retreat programmes and the persistent, intense meditation that is part of them. But the frontal lobes also regulate our emotional responses as well as help us with our overall cognition. As a person uses the frontal lobes more and more, this might help solidify the transformational aspect of enlightenment experiences.

After the retreat, there were changes in how different parts of the brain were functionally connected, particularly the frontal and parietal lobes

Recognising all of these changes leads us to consider what the best approaches might be for having such transformative experiences. Everyone can engage in a meditation or prayer practice as part of their daily routine, and many religious and spiritual people do. But another approach is to participate in a spiritual retreat programme that can last days or longer.

We studied one such seven-day programme in Pennsylvania based on the spiritual exercises of Saint Ignatius. Our research on this retreat programme, which is typically conducted in silence and consists of extended periods of prayer and meditation, showed a number of differences in participants’ brains after the retreat compared with before it. For one, our study looked at the effects of the retreat programme on serotonin and dopamine, two critical neurotransmitters involved in many of our emotional and cognitive processes. The results suggested that a person’s brain becomes more sensitised to the effects of serotonin and dopamine, which might help us understand how retreat programmes of this nature can improve measures of wellbeing (in this case, decreased self-reported tension and fatigue). Our research also found that, after the retreat, there were changes in how different parts of the brain were functionally connected, particularly the frontal and parietal lobes.

The data from our studies suggest that many spiritual practices and retreats can be beneficial for people by changing the brain and improving various psychological and spiritual measures. So what should you consider if you are thinking about trying a retreat programme? It is important to learn as much as possible about how a programme works to make sure that it is consistent with your goals and beliefs. Are you trying to reduce stress, connect with your religious tradition or find spiritual enlightenment? It can be helpful to talk with the leader of the programme to better assess its goals. Further, our data indicate that it is essential that a person is able to fully engage in the practices and buy into them. For example, one would not expect a Jewish person to find much of an effect from exercises based in the Christian tradition of Saint Ignatius. Hence, each person needs to carefully select the practices or programmes that they engage in, based on their own goals and spiritual background.

Ultimately, each person has to try particular practices or programmes and see how they respond. Hopefully, finding the right fit will lead to intense spiritual experiences that comprise the elements described above – including newfound feelings of oneness, clarity and surrender – and that make lasting positive changes to the brain and to one’s whole being.