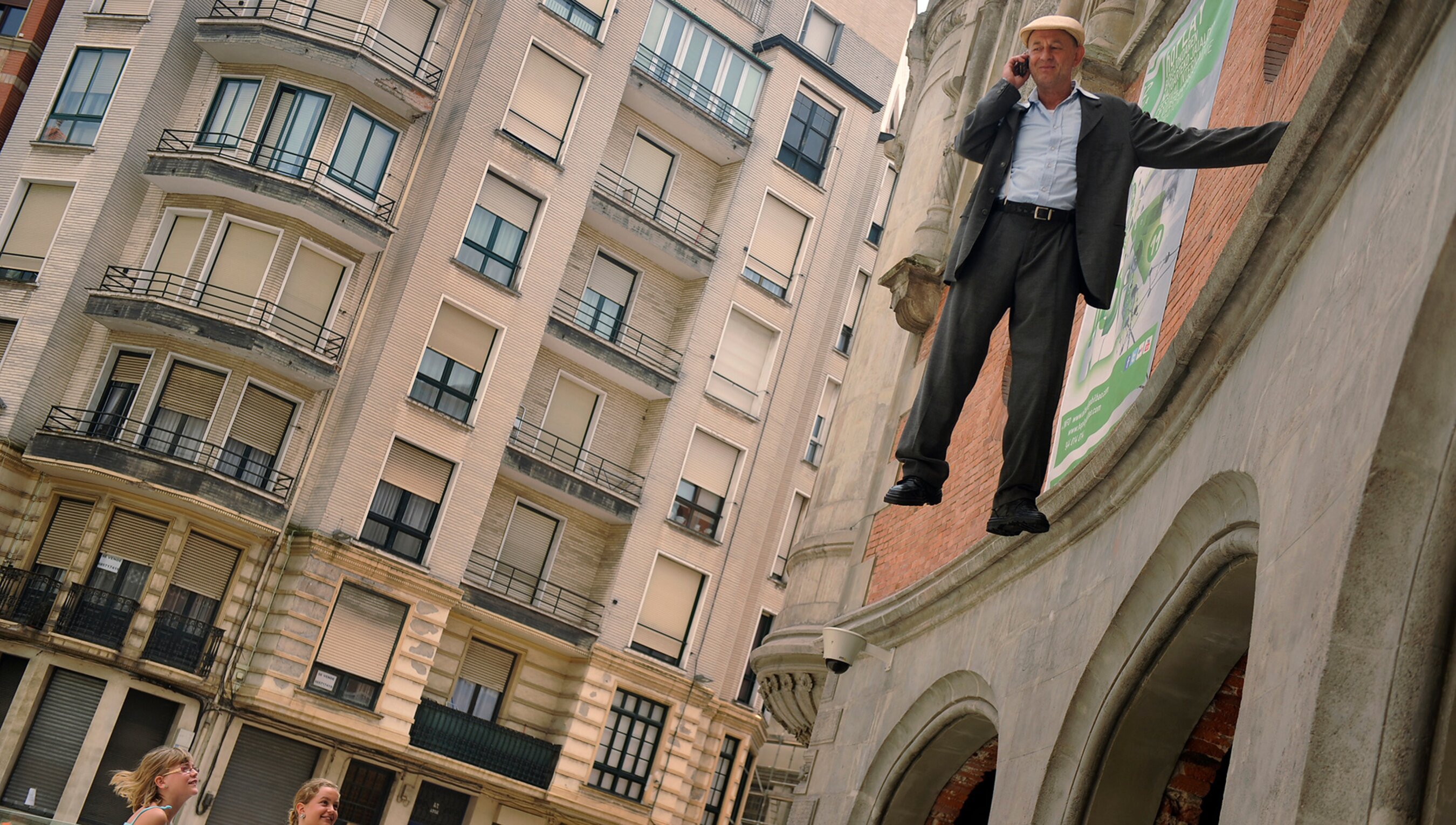 is a cognitive neuroscientist and experimental psychologist. He is a lecturer at Goldsmiths, University of London, where he heads a research lab investigating how our brains build models of ourselves and the world around us.

A distorted awareness of our capacities and capabilities is often a sign of serious mental illness. Take ‘Sophie’, a British woman living in Oxfordshire, who – in the grips of a delusional episode – developed the bizarre belief that she was God, and so able to take flight from sheer cliff drops and walk effortlessly on water. Though this episode subsided before she came to any serious harm, she later recounted that, if she had indeed tried leaping from slightly taller heights or treading in deeper pools of water, her already unsettling story could have had a fatal ending.

Sophie’s story is so unnerving because we take for granted that our insight into our actions and their consequences is accurate. This intuition is deeply embedded in many of our formal institutions. When a jury finds a defendant guilty of a crime or a tribunal disciplines a doctor for malpractice, we tacitly assume that the blameworthy party had a good awareness of their actions and the outcomes that ensued. The same thought seems to guide our personal and social relationships. When we praise someone for a thoughtful gift or admonish them for a hurtful comment, we do so because we believe those close to us are well aware of how their actions can affect us – and perhaps that they should have known better.

However, evidence from the cognitive sciences suggests our subjective awareness of what we can and cannot control is not always reliable. This was demonstrated in a seminal set of experiments in 1979 by the psychologists Lauren Alloy and Lyn Abramson using a fiendishly simple piece of equipment – a button wired up to a light bulb. Alloy and Abramson asked student volunteers at the University of Pennsylvania to play around with the button, and to judge how much their presses influenced the flashing bulb. Unbeknown to the students, sometimes the button was disconnected from the bulb, and all the flashes were programmed to occur at random. Surprisingly, perfectly healthy volunteers still reported feeling that they could influence when the flashes would occur, even when those flashes were completely uncontrollable.

Psychologists have termed these kinds of experiences ‘illusions of control’ – where we feel a sense of agency over events in the world that we can’t truly influence. And examples of these illusions crop up in our everyday lives, if you know where to look. For instance, in the 1960s the sociologist James Henslin observed American cab drivers as they gambled away their profits on curbside games of craps. Henslin spotted that when one of the cabbies needed a higher number on the dice, he’d superstitiously throw them harder against the curb – even though this can’t possibly affect the outcome. Those of us who live in cities might often experience illusions of control, since many of the mechanical buttons we interact with – from pedestrian crossings, elevators or office thermostats – have become obsolete, with the underlying systems controlled by centralised computers and automatic timers. Nonetheless, every day, thousands of us push the ‘placebo buttons’ – not realising that they do nothing at all.

Illusions of control have led scientists to claim that human beings have a fundamentally grandiose picture of how much they can influence the world around them. Some perspectives view the problem through an evolutionary lens, and suggest that exaggerated beliefs about our actions – while false – could be a useful product of natural selection. Thinkers in this camp reason that creatures with overly optimistic beliefs about their chances of success will seize more of the opportunities that the environment offers up. On this reading, we descend from those plucky primates who were overconfident about their ability to snatch food from a rival or seduce an attractive mate, and were thus more likely to survive, multiply and pass on this disposition to us.

These evolutionary ideas are complemented by perspectives from social psychology that suggest an exaggerated sense of control is a key ingredient to healthy self-esteem. One striking demonstration of this comes from studies of people with depression – who do not experience illusions of control in the same way. This observation led Alloy and Abramson to suggest that depression gives us a ‘sadder but wiser’ view of our capabilities. On this view, the feelings of powerlessness associated with the illness arise because the scales have fallen from the patient’s eyes, and they see how little they can shape the world around them. To be healthy is to be deluded.

The idea that humans are fundamentally deluded creatures has had a wide-ranging impact on studies of the mind and brain. However, my colleagues and I have been thinking about illusions of control and if the psychological evidence really does mean we are afflicted by delusions of grandeur. We came up with a new hypothesis – maybe when people hallucinate control over some event in the world, they could be noticing something that everyone else is missing.

This idea was partly inspired by a longstanding puzzle in studies of human perception: why do we often see or hear things that aren’t really there? For more than a century, a branch of experimental psychology called ‘psychophysics’ has investigated the limits of human perception using tightly controlled laboratory tasks. For example, a volunteer in a typical psychophysical experiment might be placed in a dark, soundproof room and asked to find degraded black-and-white patterns embedded in ‘visual noise’ – similar to the television static you see when the signal fails. Such studies reveal that observers often raise a ‘false alarm’ – seeing patterns even when the experimenter hasn’t embedded one in the noisy display.

For a long time, it was thought that these ‘false alarms’ were strategic guesses: observers know that sometimes there’ll be a pattern in the noise and, if they have a lapse of attention, they might guess and hope they’re correct. However, a study led by the cognitive neuroscientist Valentin Wyart in 2012 suggested that observers really do detect patterns in the random noise. In particular, this study revealed that false alarms were more likely to occur when (just by luck) the noise spuriously looked like the pattern they were looking for. These hallucinations were also exaggerated when observers strongly expected the pattern to be there.

With my colleagues Clare Press and Carl Bunce, we thought that the same kind of thing could explain illusions of control: it might not be that we disregard the evidence in front of our eyes and decide irrationally that we can control things that we can’t. Instead, we might just be especially sensitive to ways that changes in the world co-vary with our actions, and be able to pick up on correlations that occur just by chance. If this were true, illusions of control would be a sign that humans are sensitive – not that they are grandiose.

We recently tested this idea using some new experimental techniques. Volunteers came into the lab and completed a task where they waved their hands over an infrared motion tracker to move a virtual dot – a bit like using a mouse to move a cursor on screen. Participants were told that sometimes the movements of the dot would be yoked to the movements they were actually performing, and sometimes the trajectory would be controlled by a computer. They would have to tell us if they thought they controlled the dot or not.

Our volunteers experienced strong illusions of control – feeling that they controlled the dot even when it was objectively programmed by the computer and they had no influence over it whatsoever. However – because we tracked how the participants moved – we could see that these hallucinations of control were linked to spurious correlations between action and outcome: participants were very sensitive to times when the uncontrolled dot randomly corresponded with what they were doing, and felt control when this correspondence was strong.

To further test this idea, we constructed computational models of how these decisions might be unfolding in our volunteers’ heads. This involved simulating different artificial agents and seeing how these machines would make judgments about what they can and can’t control if we placed them in our participant’s shoes. Importantly, an artificial agent programmed only to focus on the evidence at hand, rather than a grandiose agent with built-in delusional beliefs, provided a better explanation for the illusions of control we saw in our real volunteers.

These findings put pressure on the idea that humans have hardwired delusions about their actions, ignoring the evidence in front of their eyes and instead relying on exaggerated beliefs about the kinds of things they can influence. They suggest illusions of control could arise because we are very sensitive to how the world changes when we act, and can sometimes spot spurious relationships between our behaviour and changes in the environment. While the beliefs are false (we don’t actually control things), the inference might still be a rational one in an uncertain and changeable world.

This could also give us cause to think differently about the links between feelings of control and mental health. Under our theory, illusions of control are a counterintuitive sign that we are sensitive to the relationship between actions and outcomes. The same disposition that makes us occasionally hallucinate control equips us to spot weak but genuine correlations between what we do and what we see. If this is true, the absence of illusions of control in illnesses such as depression would mean that these patients don’t necessarily have a ‘sadder but wiser’ view of their capabilities. Indeed, real insight might be knowing that our control over our environments is almost never absolute, and it is important to appreciate the slight influences we have.

In Reinhold Niebuhr’s Serenity Prayer, the supplicant asks for the serenity to accept the things they cannot change, the courage to change the things they can, and the wisdom to know the difference. It has been tempting for scientists to think that illusions of control mean the human mind is rich on courage and lean on wisdom. But this might be premature, and new tools will allow scientists to reveal how our beliefs about our abilities are calibrated to the world around us – and whether the illusion of control is an illusion after all.