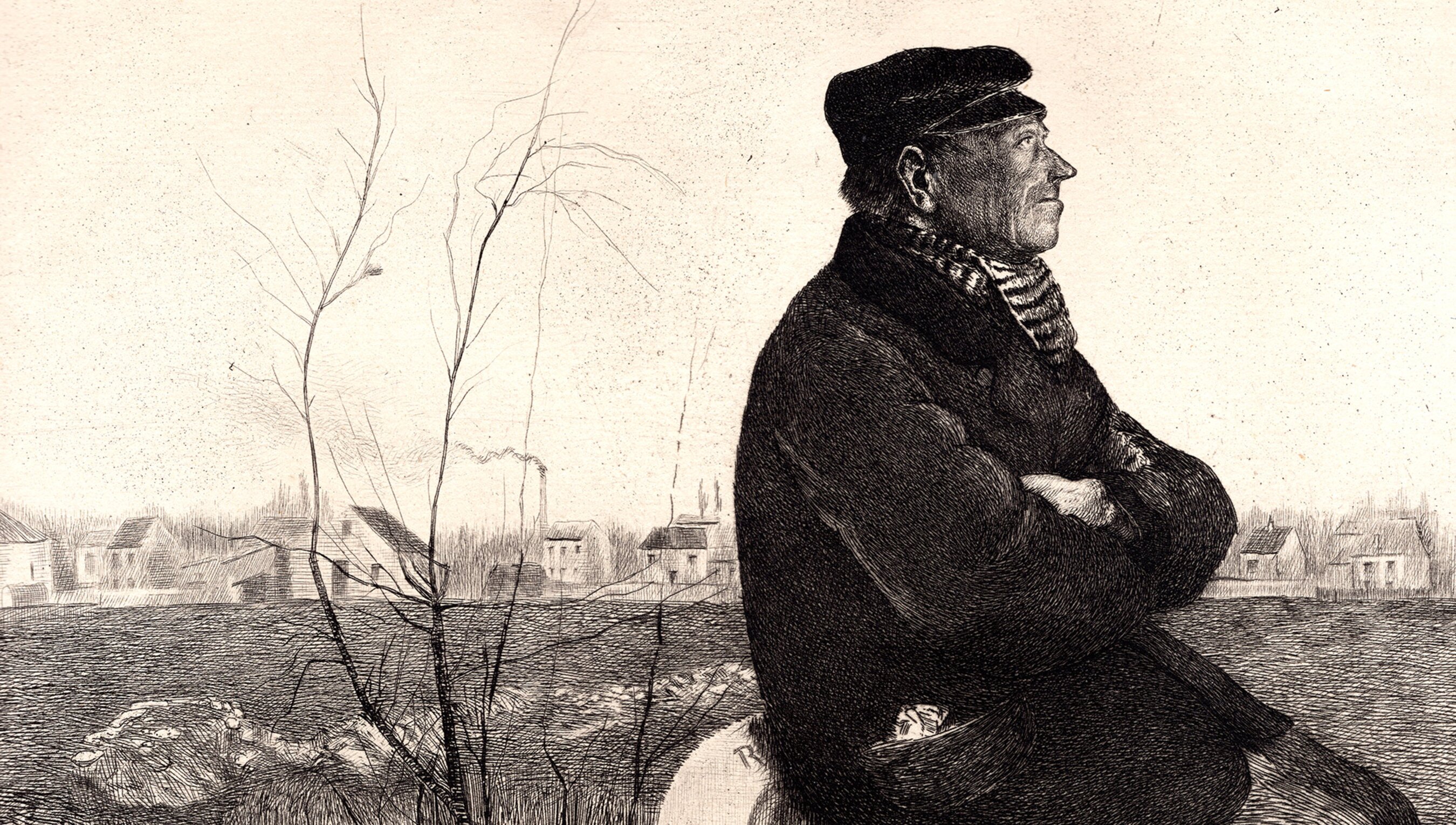 Looking at portraits with an eye to evolutionary psychology

is a philosopher and social and cognitive scientist, a researcher at the Institut Jean Nicod in Paris and professor in the departments of cognitive science and philosophy at the Central European University in Budapest. He is the author of numerous articles in anthropology, linguistics, philosophy and psychology and of six books: Rethinking Symbolism (1975), On Anthropological Knowledge (1985), Explaining Culture (1996); co-authored with Deirdre Wilson, Relevance: Communication and Cognition (1986, 2nd revised ed 1995) and Meaning and Relevance (2012); and, co-authored with Hugo Mercier, The Enigma of Reason (2017).

Jean-François Raffaëlli (1850-1924) did his best work painting or drawing the modest inhabitants of the suburbs of Paris, where he himself lived for a time. The engraving Le Cantonnier (1881) below depicts a roadman, or a road sweeper, sitting on a milestone, his arms crossed, his broom on the ground behind him. An arrow on the milestone indicates the direction of Paris and the distance: 4.1 kilometres. Significantly, the man is facing in the opposite direction. His face is illuminated by a late-afternoon sun after a rainy day, but his expression is cheerless.

The composition of the picture is peculiar: the left half, behind the man’s back, is occupied by a meagre leafless shrub, nondescript houses in the distance, and the broom on the ground. The man sitting on the milestone occupies the right half and is facing the edge of the frame rather than its centre. This picture elicits a sense of empathy for this humble worker who seems to be enjoying his rest but to have little else to look forward to. The spatial composition of the picture contributes, I want to argue, to its poignancy, and it does so in part because of an evolved psychological disposition, a disposition that humans are likely to share with many other animals.

What helped me better understand the effect produced by this composition was the research led by the cognitive scientist Helena Miton (and to which the cognitive developmental psychologist Mikołaj Hernik and I contributed): ‘A Forward Bias in Human Profile-Oriented Portraits’ (2020).

What inspired our research was a general zoological observation of no obvious relevance to art history, let alone to portrait painting. Most animals are bilaterians: they have a right and a left side, and a front and a back. This body plan is strongly correlated with the direction in which they typically move: forward. Many animals including humans perceive better and pay more attention to what’s in front of them. Hence, if you’re watching another human or a nonhuman animal and you want to understand their thoughts and predict their actions, it makes sense to attend to what might be happening in front of them rather than behind them. Even an infant spontaneously perceives humans and nonhuman animals as having a front and a back, and relies on this to anticipate what they might do next, as Hernik demonstrated in an earlier study, co-authored with the clinical psychologist Pasco Fearon and the cognitive scientist Gergely Csibra.

With Miton and Hernik, we speculated that this adaptive disposition to pay particular attention to what agents have in front of them might subtly influence one type of cultural production, namely profile portraits. We predicted that, in painting such portraits, artists would have a ‘forward bias’, that is, a tendency to leave more space in front of the sitters than behind them.

To test this forward bias hypothesis, we looked at 1,831 profile portraits by 582 European painters from the 15th to the 20th century, and measured the free space in front of the sitters and behind them. Our decision to resort to data from that particular tradition was largely based on its unique availability and richness. This evidence, however, presents a particularly apt testing ground since, in the European tradition, there’s been a strong cultural norm in portrait painting in favour of centring the sitter in the frame. We predicted that, in spite of this centring norm, European portrait paintings would tend to display this forward bias. Moreover, we predicted that the strength of this bias would increase when the strength of the cultural norm of centring decreased, as it began doing in the 18th century. So, while any general conclusion must remain tentative as long as it hasn’t been tested on the basis of evidence from non-Western traditions, our predictions about the Western tradition, if confirmed, would already give serious weight to our hypothesis of the existence of a forward bias and of its potential relevance to the spatial composition of profile portraits in general.

The overall result? We did find, as predicted, a statistically significant forward bias. The figure below shows the whole dataset of portraits ordered by the proportion of the free space in front of the sitter (with the red line at x = 0.5, meaning that there is as much free space in front as behind the sitter).

Until the mid-18th century, the norm of centring was quite systematic but, even so, there tended to be more free space in front of the sitters than behind. It might just be that the bias was weak enough to go mostly unnoticed and, anyhow, not to be seen as violating the norm. There was no cultural norm, however, that favoured such a biased departure from centring.

In the 19th and 20th centuries, norms of spatial composition in painting, and in particular the norm of centring for portrait painting, became less stringent, and experimenting with composition became more acceptable and even encouraged. One effect of that greater compositional freedom was to strengthen the forward bias in profile portraits; more specifically, cases of forward bias became much more noticeable, as for instance in the portrait Juliet (1898) by John William Waterhouse (1849-1917).

The figure below shows how the proportion of free space in front of the sitter changed with time. All the portraits above the red line have a forward bias: the further up, the greater the bias.

Even in the past two centuries, many profile portraits – for instance, Roberts’s portrait of McDonald above – were still relatively close to strict centring. Moreover, as in the previous period, there were also quite a few cases of backward rather than forward decentring. Clearly, what we’re talking about is a mere statistical tendency. In such conditions, the forward bias, while statistically robust, was too small to be generally noticed as such, let alone viewed as an implicit norm. It’s only in contemporary photography handbooks that there appears an explicit recommendation to leave sufficient ‘lead room’ or ‘look room’ in front of people seen in profile.

Raffaëlli suggests that the roadman has little in front of him, both literally in the frame of the picture and metaphorically in his life

This study, then, illustrates how evolved psychological dispositions can co-exist with cultural norms that go in different directions and jointly influence cultural practices. Olivier Morin’s study ‘How Portraits Turned Their Eyes Upon Us’ (2013), a main source of inspiration for this work, provides another such illustration. These studies also demonstrate how psychological dispositions can become factors of ‘cultural attraction’ in the cultural evolution of practices and norms.

Returning to Raffaëlli’s picture of a roadman, we can see how our study of the forward bias in human profile-oriented portraits might contribute to our understanding and appreciation of the work. Raffaëlli made extensive use of decentred compositions, and not just in profile portraits. Here for instance is his full-face portrait of the French author Edmond de Goncourt (1888).

Raffaëlli’s engraving In the Rain (1909) below is a prototypical case of a profile portrait with a moderate forward bias. The character doesn’t look more cheerful than the roadman, but the wider space in front of him, combined with the sense that the rain is now behind him, takes away some of the gloom.

Quite similar to In the Rain, but with a stronger forward bias and with some colour underscoring the contrast between rain in the back of the character and open sky in front of him, the engraving The Storm (1906) conveys a sense of hopeful expectation.

In one of his most famous paintings, A Man Having Just Painted his Fence (1881), Raffaëlli uses an unconventional composition with more space behind the character than in front of him in a way that conveys, with some mild irony, the man’s self-satisfaction.

The spatial composition is reminiscent of that of the roadman above, with the character (seen in three-quarter rather than full-profile view) standing in the right half of the picture and facing toward the frame rather than the centre of the picture. But this common structure helps highlight major differences between the two images. Here, the main item nearby on the left side is an object of pride, the freshly painted fence; there, it is the old broom on the ground by the roadman. Here, the background landscape is intriguing and lively; there, it is dull and lifeless. Neither picture gives a clear indication of what the man in the portrait might be looking at or going towards, but here the man is standing, still holding the brush and the paint pot, suggesting that his mind is on what he’s just achieved, and that the first thing he’s likely to do is to return the brush and pot to their usual place.

Now, back to the roadman:

In general – with The Man Having Just Painted his Fence being an interesting exception – what’s in front of people is more relevant to understanding what they might have in mind and what they might do next. Accordingly, when watching people, we tend to pay more attention to the space in front of them. Painters of profile-oriented portraits, intuitively attuned to this tendency, have largely put more free space in front of their sitters than behind them. By making the opposite choice, what Raffaëlli suggests is that the roadman has little in front of him, both literally in the frame of the picture and metaphorically in his life.

Of course, to appreciate Raffaëlli’s picture, one must first and foremost understand the cultural context and import of the scene depicted. As the milestone indicates, the roadman is turning his back to Paris, a city that so many French people in the provinces aspire to; in France, wherever you come from, you talk of ‘monter à Paris’ or ‘going up to Paris’. Modest inhabitants of the suburbs such as this man were at the same time physically close to the city yet socially very far from it – or, at least, far from the opportunities that made Paris so attractive. One should also situate the picture in the art of the time, where most portrait painting was of a rich sitter who could commission the work. Raffaëlli himself, having become famous as ‘le peintre des banlieues’ (‘the painter of the suburbs’), tried his hand at more conventional portraits of members of the Parisian cultural elite such as his portrait of Goncourt. For portraits of rich or famous people, painters have generally used pictorial devices, including spatial composition, to show sitters as they wanted to be seen. The roadman or the man who’d painted his fence were too humble to have a say.

What I’ve tried to show here is that our understanding and appreciation of this picture can use a little help from evolutionary psychology. Humans have a psychological disposition to pay a bit more attention to what’s in front of others (a disposition that’s likely to have its origin in the evolution of bilaterian animals). Recognising the way in which this disposition might have influenced the composition of profile portraits in the Western tradition, and in particular in the 19th century, highlights the psychological acumen of Raffaëlli in experimenting with a spatial composition diametrically opposed to the well-entrenched forward bias. 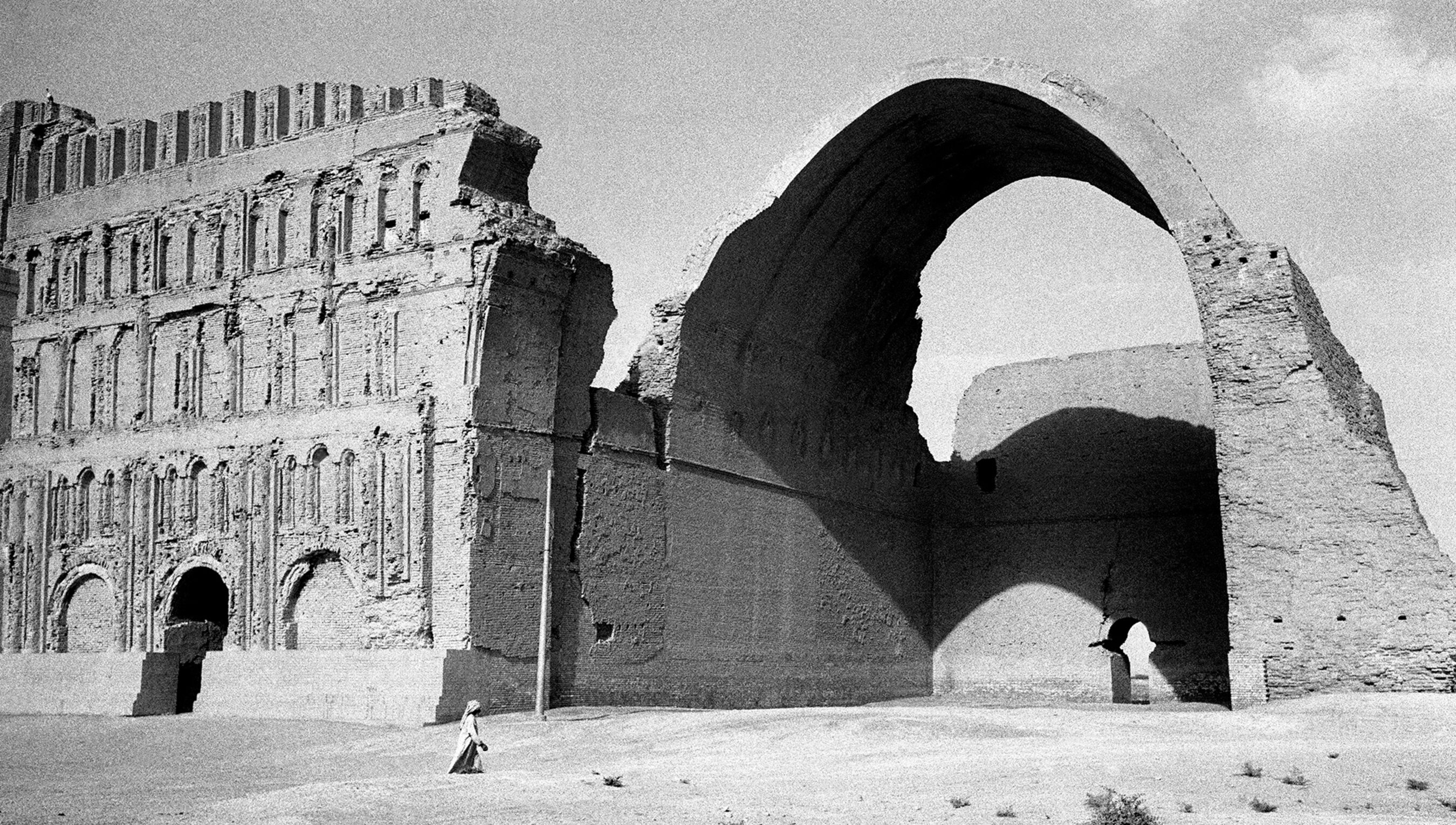 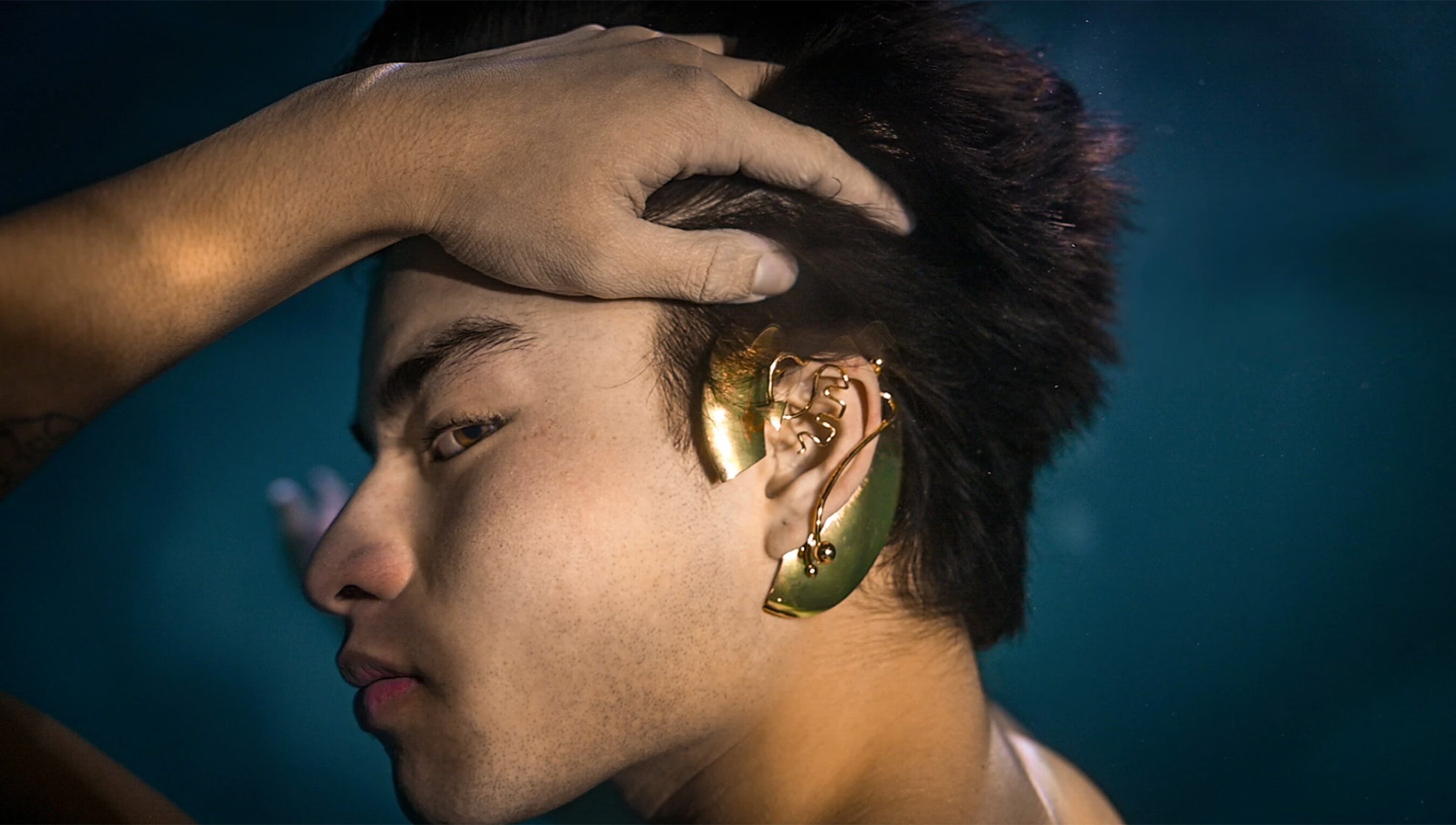