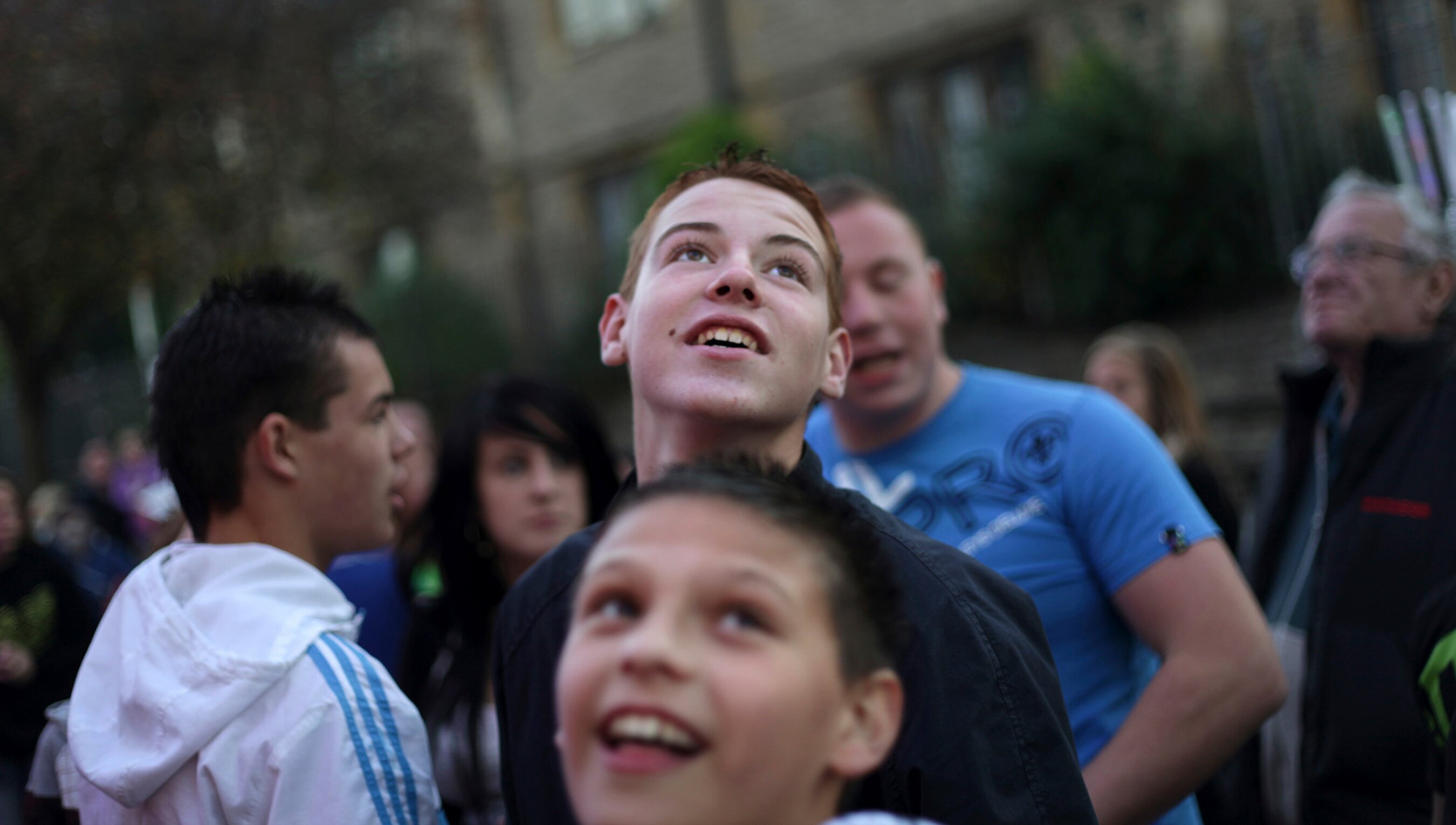 is an assistant professor of law at Osgoode Hall Law School at York University in Canada. She researches and teaches in the areas of the law of war, international criminal law, criminal law, and law and sexuality. She splits her time between Toronto and rural Newfoundland and Labrador.

As a new parent of boy/girl twins (at least as they were assigned at birth), I puzzle about the cultural pressure to scrutinise my infant son’s burgeoning masculinity lest it emerge as ‘toxic’. I catch myself watching and wondering, resisting the urge to police his interactions with his sister: He took the toy she was playing with, is this aggression that will stifle her confidence? She seems unbothered and has quickly snatched it back – phew! Is it bullying or an early form of manspreading when, both of them vying for the same object, he moves into her space and pushes her aside?

Today, popular parenting messaging, from Instagram to The New York Times, is suspicious of and concerned about boys. ‘Boys are broken,’ we are told. Boys underperform girls in school and college, and are more likely to engage in behaviour that is harmful to both themselves and others. Boys fight, bully, take dangerous risks, and sexually harass. From school shootings to incel-inspired terrorism, white boys in particular perpetrate mass acts of violence.

If left unchecked, so the reasoning goes, these boys will grow into gender dysfunctional men. Curiously, in ‘toxic masculinity’ discourse, antisocial and poisonous gender performances are the cause and effect of much of the harm both faced and perpetrated by men. That the same basic idea is the starting point for both pop feminist and men’s rights approaches to today’s so-called crisis of masculinity is a red flag that something is amiss with our framing.

According to the American Psychological Association (APA) ‘Guidelines for Practice with Boys and Men’ (2018), ‘gender role socialisation practices [are] associated with violence and problem behaviours for boys and men’. The APA specifies masculinity as implicated in men’s overincarceration, propensity for addiction, disproportionate vulnerability to suicide and poor health outcomes. Further, the APA warns, men are more likely to comply with masculinities characterised by ‘anti-femininity, achievement, eschewal of the appearance of weakness, and adventure, risk, and violence’ where they suffer from childhood insecurities. Role models, they maintain, offering healthy examples of alternative masculinities are essential so boys can avoid becoming victim and perpetrator of toxic masculinity.

Portraying toxic masculinity as a problem that can be solved through early intervention by parents, caregivers and teachers sublimates a series of institutional and political contests into the ‘private’ realm of choice and childrearing. Ironically, this task will fall differentially to women, who do most of the childrearing and school teaching, and mothers in particular. ‘Why are mothers so often held accountable for the ills of the world?’ asks Jacqueline Rose in Mothers: An Essay on Love and Cruelty (2018), including ‘the breakdown in the social fabric, the threat to welfare, to the health of the nation’. If men are toxic, the thinking goes, perhaps their mothers are at least partly to blame.

The work of raising good men will also not be evenly distributed. Heads of single-parent households and precarious families, who are disproportionately racialised and feminised, spend more time outside the home, often working dangerous frontline pandemic jobs. As such, those who have the time and resources to focus on attachment parenting and gender hygiene are more likely to be white and affluent. When we place the blame for men’s abusive and harmful behaviour at the feet of their masculinity gone awry in this way, we construct a solution that is likely to retrench background power structures that already overpolice, oversurveil and overdiscipline the behaviour of poor, Black, Indigenous and racialised boys. Anti-toxic-masculinity activism is entirely compatible with age-old commitments to protect white female innocence at the cost of Black boys’ freedom.

‘Toxic masculinity’ also at times relies on a biological sex essentialism that, thanks in good part to the work of queer and feminist writers, most liberal people reject. It is also interesting that toxic masculinity has captured our attention at the same time as awareness around the lived realities of transgendered persons has increased our understanding of gender diversity. In today’s context, it is unclear why we are talking about boys and girls as though these are fixed identities to which masculinity and femininity naturally attach, unless to speak in these terms promotes a form of gender moralism, or gender dogma.

It is also unclear that gender is as important a form of social difference as toxic masculinity ‘theory’ suggests when it comes to mapping how oppression takes root under the current conditions of capitalism. Indeed, a main purpose of toxic masculinity is to distract us from race and class by preoccupying us with gender, where gender difference is itself divorced from processes of capitalist value creation.

Researchers have studied hegemonic and ideological masculinities for decades. It’s only recently that some of these analytic frames have been translated into ‘toxic masculinity’ as a catch-all phrase for male bad behaviour. It’s obviously caught on. In the wake of #MeToo, which has provided a public forum for debating problematic masculinities, this totalising category is alluring. It is probably true that some men act out in harmful ways in part because they are isolated, alone, insecure and fearful. But these psychological states offer little help explaining system-level inequalities such as the gender wage gap, the undervaluation of feminised domestic and care labour, or access to reproductive health services.

As Michael Salter pointed out in ‘The Problem With A Fight Against Toxic Masculinity’ (2019) in The Atlantic, focusing on the culture of masculine expression as the cause of gender-based injustices and violence obscures more than it reveals. Specifically, it excludes the material conditions that produce and encourage dysfunctional performances of masculinity themselves. Confusing the symptom for the cause in this way creates the risk that ‘people who oppose toxic masculinity can inadvertently collude with institutions that perpetuate it’. The popular idea that toxic masculinity can be both prevented and cured by instructing boys and young men in acceptable or healthy forms of masculinity is an unhelpful simplification. It offloads on to individuals the responsibility for countering the real problems of wealth and power distribution that lie at the heart of gender inequity.

As childhood has become increasingly commercialised, so too has parenthood. Products are a key medium through which kids learn about, form and express their gender identity. In turn, parents partake in an economy of childhood gender socialisation. We are meant to create and give meaning to our own identities through the consumer choices we make for our children. Today, parental choice is marketed not only as the ability to opt for blue or pink, Barbies or Tonka trucks, but also to resist these stereotypical gender frames.

Buying into toxic masculinity discourse is easy because it gives parents a readymade, off-the-shelf way to virtue signal in a way that is broadly aligned with middle-class political commitments. The outpouring of ‘How To Not Raise A Sexist Pig’ pieces to post or share lends itself to performative social media activity where ‘great moms’ pledge to ‘raise our sons better than today’s men’. In a recent viral TikTok video, new mother Sarah Lynes in California shows viewers the children’s books she bought her infant son, Bennett, ‘to help prevent him from growing up to be… awful.’ Showcasing her knowledge of pop feminism, these picture books include C Is for Consent, Will Ladybug Hug? and I Clean Like Daddy.

The core idea is that, with the right consumer choices and antibullying protocols, parents and teachers can train boys and young men to be more in tune with their inner selves and their vulnerabilities. The deceptively uncomplicated premise is that this will then make boys more able to express their emotions rather than repressing them.

Focusing on superficial, spontaneous eruptions of anger and violence as manifestations of male toxicity is the product of a dangerous misconception about the nature of power

Instructing men and boys on how to embrace weakness is at least as marketable as ‘girl boss’ versions of feminism where giving your daughter an iconic feminist name, such as Hillary, Ruth or Michelle, is sold as inspirational and empowering. (I took the opposite tack, calling my daughter after my grandmother who had limited literacy.) Toxic masculinity, like what the scholar Catherine Rottenberg has called neoliberal feminism, ‘recognises gender inequality … while simultaneously denying that socioeconomic and cultural structures shape our lives’. As a result, those who oppose ‘toxic masculinity’ see it as systemic, but they don’t seem to see the system. If we were really interested in combating male violence, we would take seriously calls to defund, or otherwise dismantle, the police-industrial complex.

Focusing on superficial, spontaneous eruptions of anger and violence as manifestations of male toxicity is the product of a dangerous misconception about the nature of power. The men who hold the most power in our society are able to do so in large part due to intense institutional networks of affirmation, acceptance and protection. While we easily categorise behaviour such as catcalling as toxic, the world’s truly destructive yet charming and polished men – eg, Henry Kissinger or Tony Blair – are not so described. Additionally, Brett Kavanaugh rose to power in spite of, not because of, his shouty, obstinate performance at his US Supreme Court confirmation hearing. The real toxicity of the Kavanaugh episode can be found in how elites mobilised professional discourses of expertise to cleanse his behaviour and shore up their own privilege, and in how his alleged sexual assault was permitted to overshadow his objectionable judicial record on labour rights, environmental protection and healthcare.

Portraying individual men and boys’ inability to be vulnerable, to express their authentic selves, and to form meaningful interpersonal relationships as toxic is a form of gentility or class politics, in which departures from educated middle-class gender norms are seen as pathological and dangerous. It relies on a middle-class disdain for working-class mores expressed in exchange for the perception of power.

It is no surprise that the fight against toxic masculinity is rooted in modes of parenting and schooling. Few practices are more class-segregated. Initiatives that receive public funding, such as Men of CODE, ostensibly designed to prevent intimate partner violence, trade in militaristic ideals of chivalry and fraternal brotherhood to popularise their message, and primarily target Black youth. Research shows that discourses of school safety have also resulted in the disproportionate surveillance and policing of racialised and poor children.

Anti-toxic-masculinity projects masquerade as progressive and equality-seeking. In reality, they turn our attention away from the structures of power that enable the worst and most widespread harms inflicted on people, such as war and economic brutality. In so doing, they make some of the most vulnerable men and boys, whom they purport to protect, objects of scrutiny and discipline.