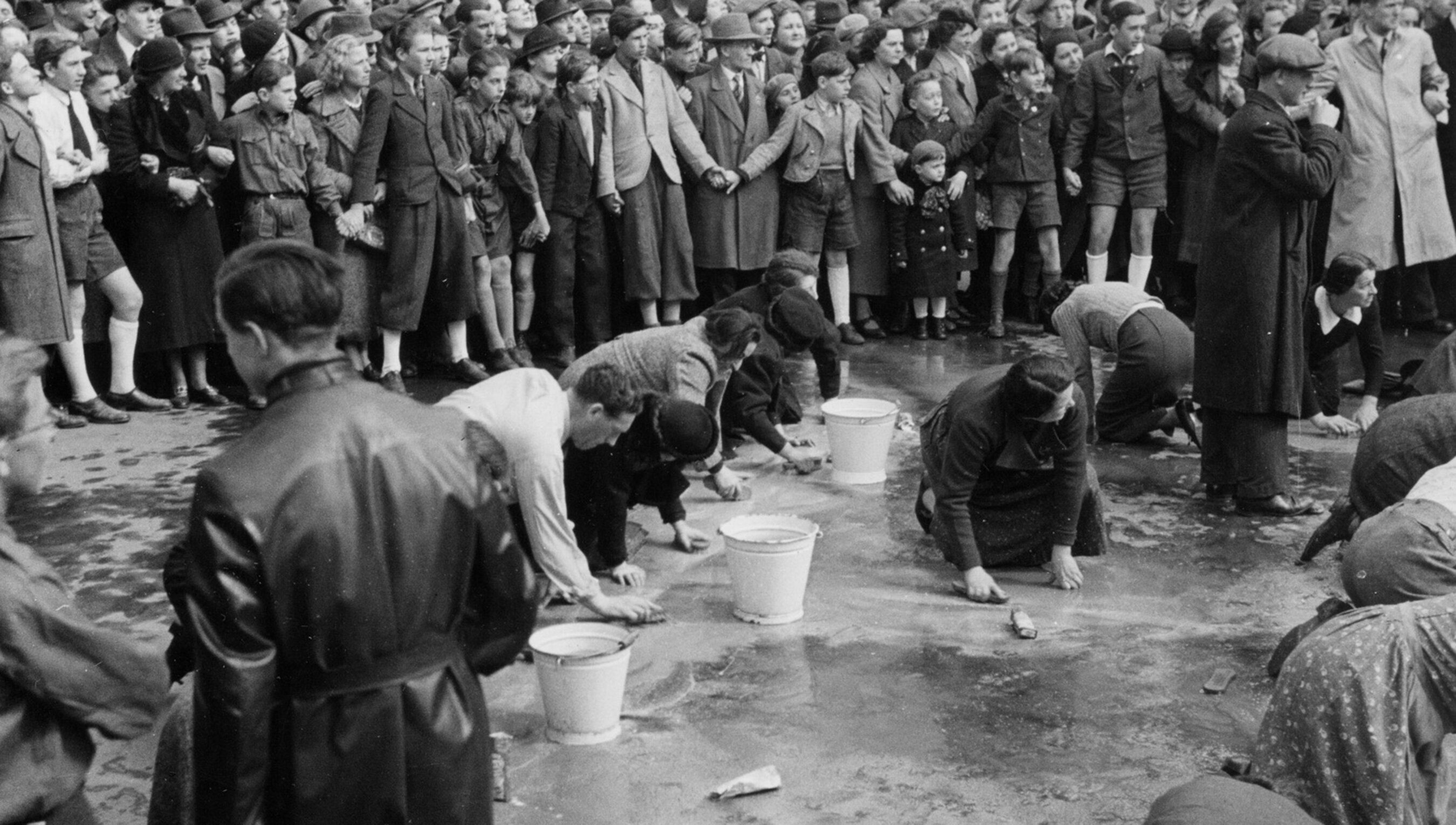 The rise of the bystander as a complicit historical actor

is professor of history and director of Jewish studies in the Department of History at Kean University in New Jersey. His latest book is Survivor Transitional Narratives of Nazi-Era Destruction: The Second Liberation (2017).

At about 3 o’clock one morning in the early spring of 1964, Kitty Genovese, 28, arrived home from the bar in New York City where she worked, as she did morning after morning. While she walked in darkness from the lot where she’d parked her car, an assailant attacked her, drove away and then returned to assault her some more. Genovese repeatedly screamed for help. Several neighbours reported hearing her but, as the story goes, no one answered her calls. The assailant left her eventually to die.

The New York Times gave the incident routine coverage: Genovese was one more victim of brutal assault on the streets of the city. But a couple of weeks later, the story made front-page news. There were no new facts or startling discoveries; what was new was the reframing of the story: where were the neighbours? How could they so heartlessly ignore the victim’s cries for help? What was just another violent crime turned into a sensational murder case. Genovese became a household name associated with what grew into a controversial story about bystanders and their complicit silence. The residents of the Mowbray, an apartment complex in Queens across the street from the crime scene, were in the unenviable position of having to defend themselves from international criticism. They asserted that it was, after all, three in the morning and they were asleep – moreover, with windows shut tight against the outside cold. Some claimed that, even if they’d called the police, they wouldn’t have responded to yet another street crime.

Bystander incrimination has taken root. Over time, bystanders were called out for summary condemnation. The activist Abbie Hoffman remarked: ‘And so you ask, “What about innocent bystanders?” But we are in a time of revolution. If you are a bystander, you are not innocent.’ The political philosopher Hannah Arendt, also writing in the 1960s, made the point by referring to the requirements of civil conduct: our ‘vicarious responsibility for things we have not done, this taking upon ourselves the consequences for things we are entirely innocent of, is the price we pay for the fact that we live our lives not by ourselves but among our fellow [citizens].’

The alleged responsibilities of bystanders acquired such moral force that critics have pushed back. Victoria Barnett, author of Bystanders: Conscience and Complicity During the Holocaust (1999), asked: ‘What lies beneath the surface [of silence]?’ suggesting that fear or perpetrator allegiance explains the reticence of onlookers. Henrik Edgren, another scholar who has written about bystanders, posits assertions that are similarly exculpatory, explaining that bystanders are often coerced from interfering in harmful acts. Offering canonic justification for bystander inertia, the evidence-based theory of the bystander effect proposed in 1968 by the social psychologists John Darley and Bibb Latané argued that onlookers fail to intervene when they believe that others will.

The presumption of bystanders’ responsibility has, however, crystallised into the predominant opinion. Good Samaritan laws ratify intervention and protect ‘upstanders’ from liability. Bystander intervention is now axiomatic, a paragon of civic behaviour. Consider, by contrast, an image from the Tulsa race massacre of 1921 in Oklahoma: men and women blithely go about their business while the city within view burns. Images of lynchings are also revealing: onlookers, hardly indifferent, are downright jubilant. Nazi authorities made a point of including onlookers in their documentation of persecution. Edgren is no doubt right about the risks of intervention, but it is just as likely that German onlookers felt lucky to be on the right side of history or were even impressed with the clarity that the Nazis achieved about who belonged to the new Germany and who didn’t. Other images from the Nazi period confirm that looking on was acceptable behaviour, if not a joyful experience, often serving to bind observers into a community of privileged insiders. Images of Kristallnacht, for example, show spectators gazing inertly at a burning synagogue and urban passers-by oblivious to the effects of racially inspired vandalism.

Paradoxically, the Nazi period was pivotal in turning public opinion against bystanders. Victims were making themselves heard. In 1935, Joachim Prinz, a leader of the German Jewish community, wrote an early and classic statement of bystander incrimination when racism was again on the rise after a two-year lull in state-inspired antisemitism. The notorious Nuremberg Laws, which emerged later that year, would codify national apartheid. Jews, wrote Prinz, were dangerously vulnerable, but just as ominous, he asserted, was the silence of his compatriots: ‘The Jews of small towns, who live at the market square without neighbours, whose children go to school without neighbouring children, feel the isolation …’ It ‘might be the hardest lot anyone can befall’ – as hard as persecution itself.

Jews, whose demise accelerated during the Second World War, remonstrated as strongly against the indifference of onlookers as they did against their assailants. Writing in 1944 from his hiding place in Warsaw, Tadeusz Obręski reviled the Polish government-in-exile:

Why … didn’t it order the Poles, back in 1939, to help Jews hide from the German murderers? Why did they keep silent? Why did they let, and why are they still letting, us be destroyed, here on the Aryan side? … The Polish people betrayed three and a half million Jews. This is a fact which will be discussed in [future] history.

Obręski made sure that, in losing hope for survival, he would save his final, bitter words for feckless officials and ordinary citizens alike.

It’s unlikely that the turn from bystander innocence to bystander incrimination started during the Nazi period. We need more research on the history of bystander construction to clarify its emergence as consensus opinion. Did Black people in the United States, for example, implore white neighbours for protection against the systems of slavery and Jim Crow? We find little evidence for this until the mobilisation of the civil rights movement in the 1950s and ’60s, and Black people did so then in good part because the Holocaust and its legacy exposed bystanders’ complicity. Writing in 1963, Martin Luther King, Jr commented that, though it was ‘“illegal” to aid and comfort a Jew in Hitler’s Germany … had I lived in Germany at the time I would have aided and comforted my Jewish brothers.’ At the time, the Black militant magazine The Liberator frequently referred to the consequences of passivity during the Holocaust era, as it saw it, to inspire action as well, turning its attention to Black people themselves.

Historically, European Jews could hardly imagine that their neighbours wouldn’t provide protection whenever they were collectively threatened. Obręski’s reference to betrayal is significant. For Jews, the system had been favourable. Their statutory emancipation from medieval ghettos, spanning the late-18th to late-19th centuries, promised their recognition as citizens, which entitled them to equal protections secured by the rule of law. It was not unreasonable for Jews to expect protection, if not from the state then from other Germans. As Prinz wrote: ‘We would not find it all [isolation] so painful if we did not have the feeling that we once did have neighbours.’

Black Americans, by contrast had no choice but to rely on other Black Americans. Some even argue, and argue persuasively, that it’s more prudent this way because relying on others for help would put Black people at the mercy of their capricious neighbours, a policy that ultimately proved fatal for Jews. In retrospect, Jews rued their naivety. They suffered from the unanticipated abandonment of their compatriots. Abandonment, wrote the Holocaust survivor Vladimir Jankélévitch, was ‘one of the most frightful aspects of their ordeal’. Simon Wiesenthal, another survivor, elaborated: ‘Our fathers had crept out of the confines of the [premodern] ghetto into the open world. They had worked hard and done all they could to be recognised by their fellow creatures. But it was all in vain.’ Like Prinz, Wiesenthal felt the sting of abject betrayal.

Informed by the memory of the Holocaust, onlookers metamorphosed into accessories to crime

The discourse of bystander incrimination grew stronger in the 1960s. Bystanders were roundly condemned for their indifference. While onlookers and others offered exculpatory reasons for inaction, victims were unwavering: bystanders were unconditionally complicit. King, writing from a Birmingham jail, observed: ‘We will have to repent in this generation not merely for the hateful words and the actions of the bad people but for the appalling silence of the good people.’ Jewish survivors were also vocal. At the signature Great March on Washington the same year, Prinz, now a German expatriate and American citizen, echoed what he wrote three decades before:

The 1960s was the decade when Holocaust survivors started to publish their accounts for a largely unsympathetic audience: Jankélévitch in 1967, Wiesenthal in 1969 and, among the most reflective memoirists, Jean Améry in 1966. Later, Améry wrote with bitter irony that: ‘The expectation of help, the certainty of help, is indeed one of the fundamental experiences of human beings …’ The American journalist Arthur Morse confirmed the verdict of complicity in his study While Six Million Died: A Chronicle of American Apathy (1968): ‘We must understand how [the Holocaust] happened in the past – not only in terms of the killers and the killed, but of the bystanders.’ Informed by the memory of the Holocaust, onlookers metamorphosed into accessories to crime, guilty of lethal nonfeasance.

The backstory of the Genovese case is evidence of the influence of Holocaust memory on bystander incrimination. Transforming the incidence of murder into a story about witnesses who stood by was the idea of A M Rosenthal, then the metropolitan editor of The New York Times. Articles roundly admonished bystanders, a preoccupation that, for more than a year, overshadowed the crime itself. It turns out that Rosenthal, serving as the Times’ Warsaw correspondent in the late-1950s, had visited Auschwitz and reported that it would be ‘the most grievous act’ to turn away ‘without having said or written anything’.

We need to consider victims’ perspectives in accounting for bystander inaction, as I have argued in my book Survivor Transitional Narratives of Nazi-Era Destruction: The Second Liberation (2018). Not only do they draw our attention to bystanders’ decisive abandonment; they also write discursively about neighbours they once counted on and, importantly, still longed for. The longing is, paradoxically, true for bystanders themselves. Consider the letters in response to the New York Times obituary for Sophia Farrar, who died last month. Farrar was a Queens resident who heard Genovese’s screams that early morning in 1964 and came to her rescue. James Solomon, the director of The Witness (2015), a documentary about the incident, commented: ‘Sophia Farrar’s heroic actions complicate an overly simplified parable of urban apathy.’

More than complicating the standard narrative, Farrar’s behaviour brings to light what onlookers, in spite of keeping their distance, often feel. As one letter-writer put it: ‘A statue of Sophia Farrar in Kew Gardens [in Queens] would inspire and remind its spectators of compassion and stepping to the aid of anyone in need.’ Another writer commented: ‘The accounts that no one helped Kitty Genovese informed a lifetime value for me. I resolved that if I ever hear myself saying “someone ought to …”, that someone better be me. I have stuck to that.’

In our time, when we conveniently retreat from civil society to our tribal citadels, I suspect that the summary incrimination of bystanders comes from a deeper emotion – a considerable, if fraught, desire to help others in distress, a desire that would transcend inaction if it weren’t for risk-averse prudence. That desire is, after all, ‘one of the fundamental experiences of human beings’.