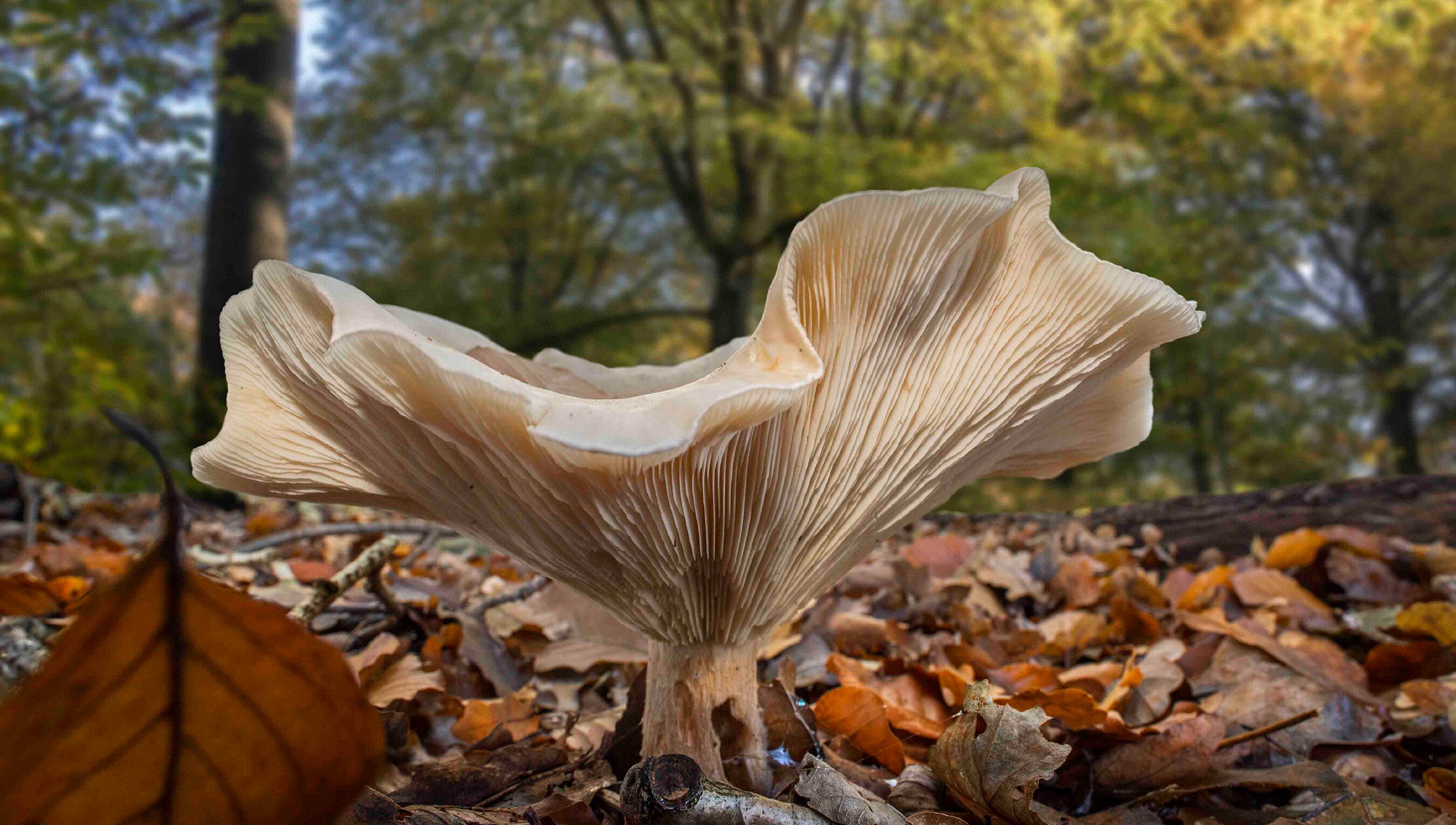 The fungal mind: on the evidence for mushroom intelligence

Mushrooms and other kinds of fungi are often associated with witchcraft and are the subjects of longstanding superstitions. Witches dance inside fairy rings of mushrooms according to German folklore, while a French fable warns that anyone foolish enough to step inside these ‘sorcerer’s rings’ will be cursed by enormous toads with bulging eyes. These impressions come from the poisonous and psychoactive peculiarities of some species, as well as the overnight appearance of toadstool ring-formations.

Given the magical reputation of the fungi, claiming that they might be conscious is dangerous territory for a credentialled scientist. But in recent years, a body of remarkable experiments have shown that fungi operate as individuals, engage in decision-making, are capable of learning, and possess short-term memory. These findings highlight the spectacular sensitivity of such ‘simple’ organisms, and situate the human version of the mind within a spectrum of consciousness that might well span the entire natural world.

Before we explore the evidence for fungal intelligence, we need to consider the slippery vocabulary of cognitive science. Consciousness implies awareness, evidence of which might be expressed in an organism’s responsiveness or sensitivity to its surroundings. There is an implicit hierarchy here, with consciousness present in a smaller subset of species, while sensitivity applies to every living thing. Until recently, most philosophers and scientists awarded consciousness to big-brained animals and excluded other forms of life from this honour. The problem with this favouritism, as the cognitive psychologist Arthur Reber has pointed out, is that it’s impossible to identify a threshold level of awareness or responsiveness that separates conscious animals from the unconscious. We can escape this dilemma, however, once we allow ourselves to identify different versions of consciousness across a continuum of species, from apes to amoebas. That’s not to imply that all organisms possess rich emotional lives and are capable of thinking, although fungi do appear to express the biological rudiments of these faculties.

Just what are mushrooms? It turns out that this question doesn’t have a simple answer. Mushrooms are the reproductive organs produced by fungi that spend most of their lives below ground in the form of microscopic filaments called hyphae. These hyphae, in turn, branch to form colonies called mycelia. Mycelia spread out in three dimensions within soil and leaf litter, absorbing water and feeding on roots, wood, and the bodies of dead insects and other animals. Each of the hyphae in a mycelium is a tube filled with pressurised fluid, and extends at its tip. The materials that power this elongation are conveyed in little packages called vesicles, whose motion is guided along an interior system of rails by proteins that operate as motors. The speed and direction of hyphal extension, as well as the positions of branch formation, are determined by patterns of vesicle delivery. This growth mechanism responds, second by second, to changes in temperature, water availability, and other opportunities and hardships imposed by the surrounding environment.

Each mycelium is like a snowflake, with a shape that arises at one place and time in the Universe

Hyphae can detect ridges on surfaces, grow around obstacles, and deploy a patch-and-repair system if they’re damaged. These actions draw upon an array of protein sensors and signalling pathways that link the external physical or chemical inputs to cellular response. The electrical activity of the cell is also sensitive to changes in the environment. Oscillations in the voltage across the hyphal membrane have been likened to nerve impulses in animals, but their function in fungi is poorly understood. Hyphae react to confinement too, altering their growth rate, becoming narrower and branching less frequently. The fungus adapts to the texture of the soil and the anatomy of plant and animal tissues as it pushes ahead and forages for food. It’s not thinking in the sense that a brained animal thinks – but the fundamental mechanisms that allow a hypha to process information are the same as those at work in our bodies.

We tend to associate consciousness and intelligence with the appearance of wilfulness or intentionality – that is, decision-making that results in a particular behavioural outcome. Whether or not humans have free will, we take actions that seem wilful: she finished her coffee, whereas her friend left her cup half full. Fungi express simpler versions of individualistic behaviour all the time. Patterns of branch formation are a good example of their seemingly idiosyncratic nature. Every young fungal colony assumes a unique shape, because the precise timing and positions of branch emergence from a hypha vary. This variation isn’t due to genetic differences, since identical clones from a single parent fungus still create colonies with unique shapes. Although the overall form is highly predictable, its detailed geometry is usually irreproducible. Each mycelium is like a snowflake, with a shape that arises at one place and time in the Universe.

Fungi also show evidence of learning and memory. Working with fungi isolated from grassland soil, German mycologists measured the effect of temperature changes on the growth of mycelia. When heated up quickly for a few hours, the mycelia stopped growing. When the temperature was reduced again, they bounced back from the episode by forming a series of smaller colonies from different spots across the original mycelium.

Meanwhile, a different set of mycelia were exposed to a mild temperature stress before the application of a more severe temperature shock. Colonies that had been ‘primed’ in this way resumed normal growth very swiftly after the severe stress, and continued their smooth expansion, rather than recovering here and there in the form of smaller colonies. This outcome suggests that they developed some defensive mechanisms that enabled them to brush off the more severe stress. The fungi retained this biochemical memory for up to 24 hours after the mild temperature shock, but forgot soon afterwards, and succumbed to additional heat stress as if they had learned nothing.

The single-celled fungus present as baker’s and brewer’s yeast, Saccharomyces cerevisiae, has also shown the capacity for cellular memory. Yeasts primed by salt exposure become better at responding to other kinds of chemical stress that follow. Memorisation appears to be present in other microorganisms, but filamentous fungi are particularly interesting because mycelia can spread over large areas and transmit information over long distances through their hyphae. That’s very different from learning and memory within populations of dispersed cells. Decomposer fungi that rot wood manifest this information transfer as they fan out beneath the leaf litter, searching for dead and damaged trees, fallen branches and other sources of food. When one part of the mycelium finds some woody debris, nutrients extracted are distributed across the whole colony, which focuses its growth away from barren to fertile locations on the forest floor. The mycelium is operating as more than a simple sum of its individual hyphae; it’s like an integrated multicellular organism.

By responding to the need to create the shortest connections between its food stations, the slime mould achieved the same economies as human architects

When researchers followed the transfer of nutrients in the lab, further remarkable discoveries were in store. In a tray of soil, hyphae were observed to make contact with a block of beechwood. They grew over its surface and penetrated the solid structure, secreting enzymes that broke down the polymers in the wood and released sugars that fuelled their metabolism. Once the fungus exhausted the energy in the woodblock, it grew out in all directions, foraging once again. Here is where the mindfulness of the fungus becomes clear. When a mycelium located a second block of beechwood and was then placed in a fresh tray, it would emerge from the same side of the block that had allowed it to hit pay-dirt the first time. It remembered that growing from a particular face of the woodblock had resulted in a food reward before, and so sought to repeat its prior success. The fungus in these experiments showed spatial recognition, memory and intelligence. It’s a conscious organism.

Simple forms of learning and memory have been studied in slime moulds for many years. Slime moulds are not fungi, but relatives of that microscopic celebrity of the biology classroom, the amoeba. They form glistening yellow colonies called plasmodia that ooze over rotting wood and eat bacteria. These gooey monsters can cover the entire stump of a tree when there’s enough moisture. Smaller versions can be nurtured with oat flakes in the lab, where the flattened plasmodia move from flake to flake, keeping the whole organism alive with a network of veins that pulse with fluid. In a 2010 experiment, when its plasmodium was surrounded by oat flakes arranged in the same pattern as the cities circling the Japanese capital, it created a pattern that was strikingly similar to the layout of the railway system around Tokyo. By responding to the need to create the shortest connections between its food stations, the slime mould achieved the same economies as human architects.

The behavioural complexity of fungi increases when they interact with living trees and shrubs rather than dead wood. Some of these relationships are destructive while others are mutually supportive. Pathogenic fungi can be very cunning in how they feed on plants and evade their defences. Mycorrhizal fungi are more cooperative, penetrating tree roots and establishing tight physical connections through which they pass water and dissolved minerals to the trees, in return for food produced by photosynthesis. The mycelium of the mycorrhizal fungus operates as an accessory root system for the tree, spreading over a larger territory with its filamentous hyphae than the plant can cover with its own rootlets.

This complex symbiosis relies on continuous chemical communication between the fungus and the plant that affects the development of both partners. Mycorrhizas support the productivity of the entire ecosystem, spurring some fungal enthusiasts to reimagine forests as superorganisms connected through a ‘wood-wide web’ of fungi. This is an intriguing idea, but allusions to the internet create problems. For starters, it does a disservice to the fungi: unlike the internet, fungi generate their own information through active interactions with their vegetal partners. Secondly, the computer metaphor has been adopted by those who attribute supernatural properties to the fungi, which is one of the reasons why fungal behaviour has often been (wrongly) relegated to the fringes of ‘real’ science. While an expert on fruit flies can tell a fellow biologist that they study insect behaviour without provoking mirth, any mention of studying mushroom cognition is almost certain to raise eyebrows.

Fungal expressions of consciousness are certainly very simple. But they do align with an emerging consensus that, while the human mind might be particular in its refinements, it’s typical in its cellular mechanisms. Experiments on fungal consciousness are exciting for mycologists because they’ve made space for the study of behaviour within the broader field of research on the biology of fungi. Those who study animal behaviour do so without reference to the molecular interactions of their muscles; likewise, mycologists can learn a great deal about fungi simply by paying closer attention to what they do. As crucial players in the ecology of the planet, these fascinating organisms deserve our full attention as genuine partners in sustaining a functional biosphere.