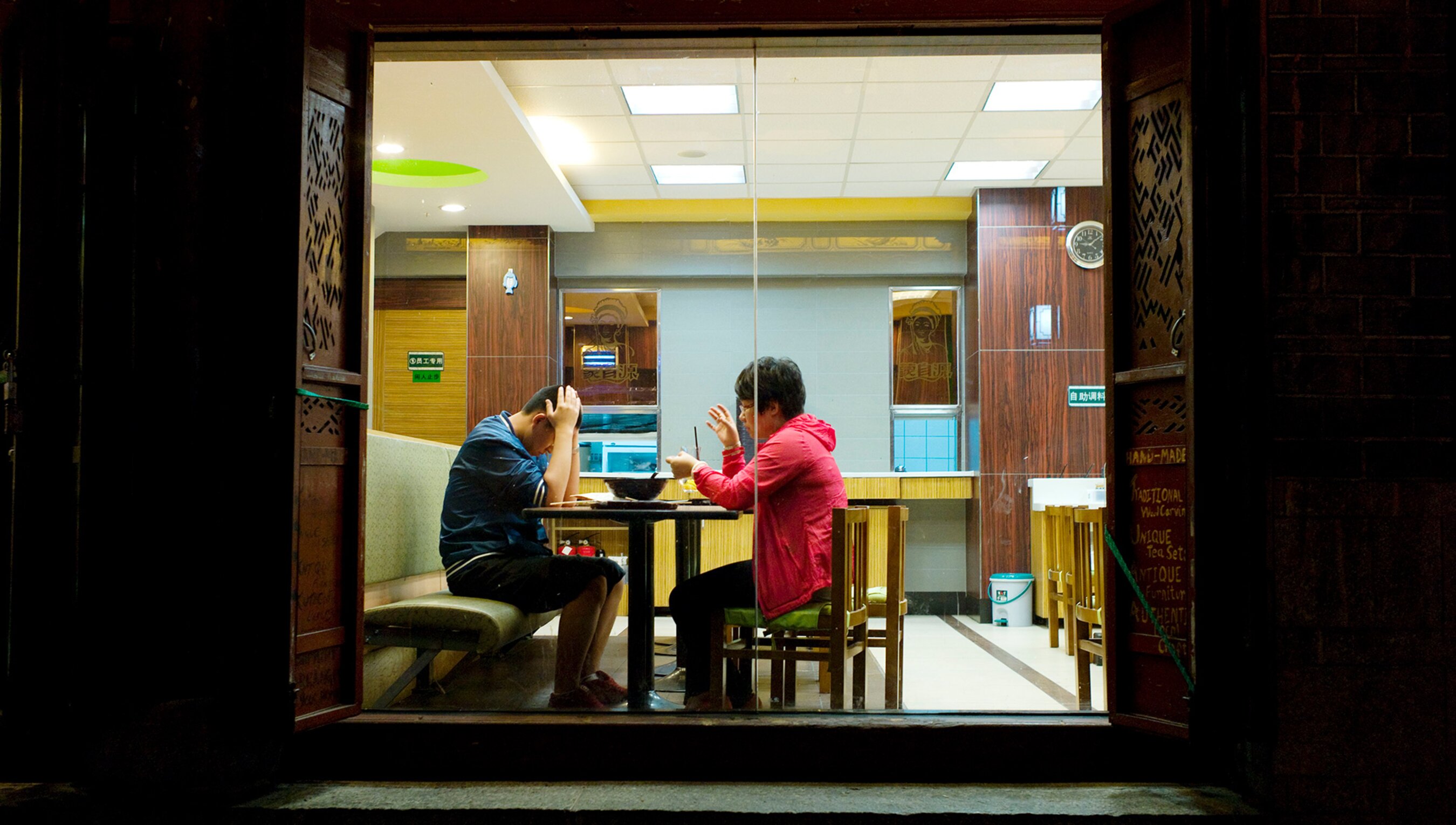 Want to know, even if it hurts? You must be a truth masochist

is a freelance writer and philosopher. He is a former SIAS Fellow at Yale Law School. He has taught and published on a wide range of topics including the philosophy of love, the nature of value, media ethics, and the philosophy of psychiatry. He is the editor of Reading Bernard Williams (2008). He lives in Lincolnshire, United Kingdom.

You and your other half, let’s imagine, live apart. One day, texting, you learn that one of their workmates has ‘drunk too much’ and has ended up staying at your partner’s place overnight. The colleague is someone you know your partner has a serious crush on. Let’s suppose, too, that you’ve never fully clarified how things stand in terms of sex outside the relationship: monogamy is often tacitly assumed but you two haven’t made it explicit. The next time you get together, the colleague’s name and midweek visit isn’t mentioned. Perhaps they got it on, perhaps they didn’t. You climb into your car to leave, and think to yourself: I’m really happy not to know.

Knowledge is so often assumed to be a good thing, particularly by philosophers, that we don’t think enough about when it makes sense to not want it. Perhaps you’re a parent and want to give your children space: you might be glad to not know all that they do when out of your sight. Perhaps you want to reconcile politically with a group that’s committed violence: it might be easier to move on if you deliberately spare yourself all the details of what they’ve done. There are, in fact, a variety of reasons why one might reasonably choose ignorance. One of the most obvious is to avoid needless pain.

Most of us care about other people and the world at large, and that makes us vulnerable to bad news. That’s life. Nonetheless, it’s good to be self-aware about when we’re self-punishingly seeking painful or depressing knowledge about ourselves or the world, and returning again and again to such knowledge. It’s easy to become what I shall call a truth masochist.

Turn first to what’s perhaps a more familiar idea, namely that people can be sadistic with the truth. You can be cruel but correct in telling someone that you’re bored with her, or unkind to remind friends about an embarrassing night out, or some clothes or haircut that really didn’t suit them. In other words, just because a statement is true, it doesn’t follow that it’s not rude or inappropriate. Sometimes very rationalistic people have a hard time understanding this point: they think that saying the truth can never be wrong. But this belief, on the face of it, seems refuted by the kind of everyday examples I’ve just given. It can be sadistic to point out to an obviously miserably self-conscious child that he has eczema on his face, or that his friends haven’t turned up. The truth can’t be wrong in the sense of factually incorrect: that doesn’t mean it’s never wrong to say it.

Sadists take pleasure in causing pain, masochists find pleasure in receiving it, and their coming together can famously lead to sexual fun. People can worry about this, especially for the person on the receiving end. But if there’s understandable concern for a person who gets pleasure from feeling pain, then it’s worth remembering how mundane and widespread such an experience is. Isn’t the cyclist a masochist as she digs in, grits her teeth, and makes it to the top of the hill? Consider too the popular taste for ever-hotter chilli sauce, or indeed a writer who enjoys agonising over the search for the right phrase. Masochism, in other words, is a common phenomenon.

That’s not to say, however, that it should never cause alarm. Just as sexual sadomasochism can span the spectrum from fun to abuse, so can masochism with the truth. If telling the truth no matter what can be cruel, then wanting to know the truth no matter what can be unkind to oneself. We all probably know a person or two who, not for professional reasons, has spent a bit too much time following every twist and turn of the news about COVID-19. There’s even a perfect word, doomscrolling, for those who, especially on Twitter, take in large volumes of negative news at once. Many of us are prone to the under-recognised behaviour of truth masochism, in which we receive a perverse pleasure in punishing ourselves with depressing information.

We each have our knowledge niches. Some people study law or medicine, others learn about fishing or fashion labels. You could call the subject matters we’re drawn to our knowledge directions or knowrientations. You might be someone with the kind of temperament that inclines you to explore the darker realities of existence with the same passion that some people love sad songs. There are times when life forces us to face difficult truths, and the capacity to recognise and respond to hard and inconvenient truths can be heroic. But it’s also valuable to see the potentially harmful ways that the desire for understanding can become entangled with the attractions of suffering.

Some forms of mental health counselling, ironically given their therapeutic aims, can present obvious dangers in this regard. Psychotherapy sessions, without astute guidance, can become a means to emphasise negative aspects of oneself or to marinate in one’s worse moments. The narrative structure of psychodynamic therapy, moreover, risks producing a true but bleakly edited narrative of a patient’s life story. This can strengthen rather than counter an individual’s self-punishing dispositions. Counselling if not careful can be, as the Viennese satirist Karl Kraus mordantly observed about psychoanalysis, the disease that mistakes itself for the cure.

You can start out romantically candid and end up woundingly honest

There’s also reason to worry when truth sadists and truth masochists come together. Remember how one person can be cruel to another though nonetheless speaking the truth. Imagine a case where a husband is constantly pointing out to his wife her worse traits, the things that she’s got wrong, her unstable family members, and the times she’s made a fool of herself. Sometimes, in abusive situations such as this, the individual on the receiving end can be already prone to self-punishment, and as a result one person’s sadism and one person’s masochism become a toxic mix. Couples so frequently act in cruel ways to one another that the late psychologist and relationship counsellor David Schnarch termed the behaviour ‘normal marital sadism’. My point is that this can include sadomasochistic use of the truth.

Every romantic relationship tends to develop its own ethic. Some people are drawn to a kind of radical honesty in which everything is shared. This ideal can spring from a number of sources, including the appealing thought that true love involves really knowing one another, warts and all. ‘Love is,’ wrote the philosopher and novelist Iris Murdoch in 1959, ‘the extremely difficult realisation that something other than oneself is real.’ Free-spoken relationships can, especially at the beginning, enjoy an exhilarating risk-taking intimacy. But a considerable danger is that, over time, the truth-sharing can take on the undesirable toxic character I’ve just described, in which one person is abusing the other, or where both lovers are knocking lumps out of one another with the truth. You can start out romantically candid and end up woundingly honest.

The idea that the truth is always good for you is rather like the idea that what is natural is always good for you: a beguiling but ultimately dangerous myth. The cosmos is, ultimately, just not that benign. Sometimes it simply makes sense to avoid the truth. If your son was abducted and brutally murdered, then it’s not unreasonable to want to not know all the horrifying details of his last moments. Indeed, it would make sense if, afterwards, you choose to leave the room when certain topics come up, or that you can’t bear hearing from another grieving parent about their missing child. The same response can make sense when someone wants to share secrets with you that would put you in an awkward or compromising situation. You can be prudently self-protective in thinking I don’t want to know.

Is your desire to not know, in a given case, sane-minded good sense or foolish evasion? There’s no formula for working out the right answer. Sometimes, clearly, you should want to know the truth, no matter how uncomfortable or distressing. If your daughter calls for urgent help, then you want to know what’s going on. Wisdom consists in what’s perhaps the ultimate ability in life: correctly discerning the situation you’re in. And you can’t do that without at least some grasp of the truth. This is not, therefore, a plea for general ignorance. You need to be in a position of knowledge in order to know those occasions when it is smart to turn your back on it.

Knowledge and reasonVirtues and vices
19 July 2021