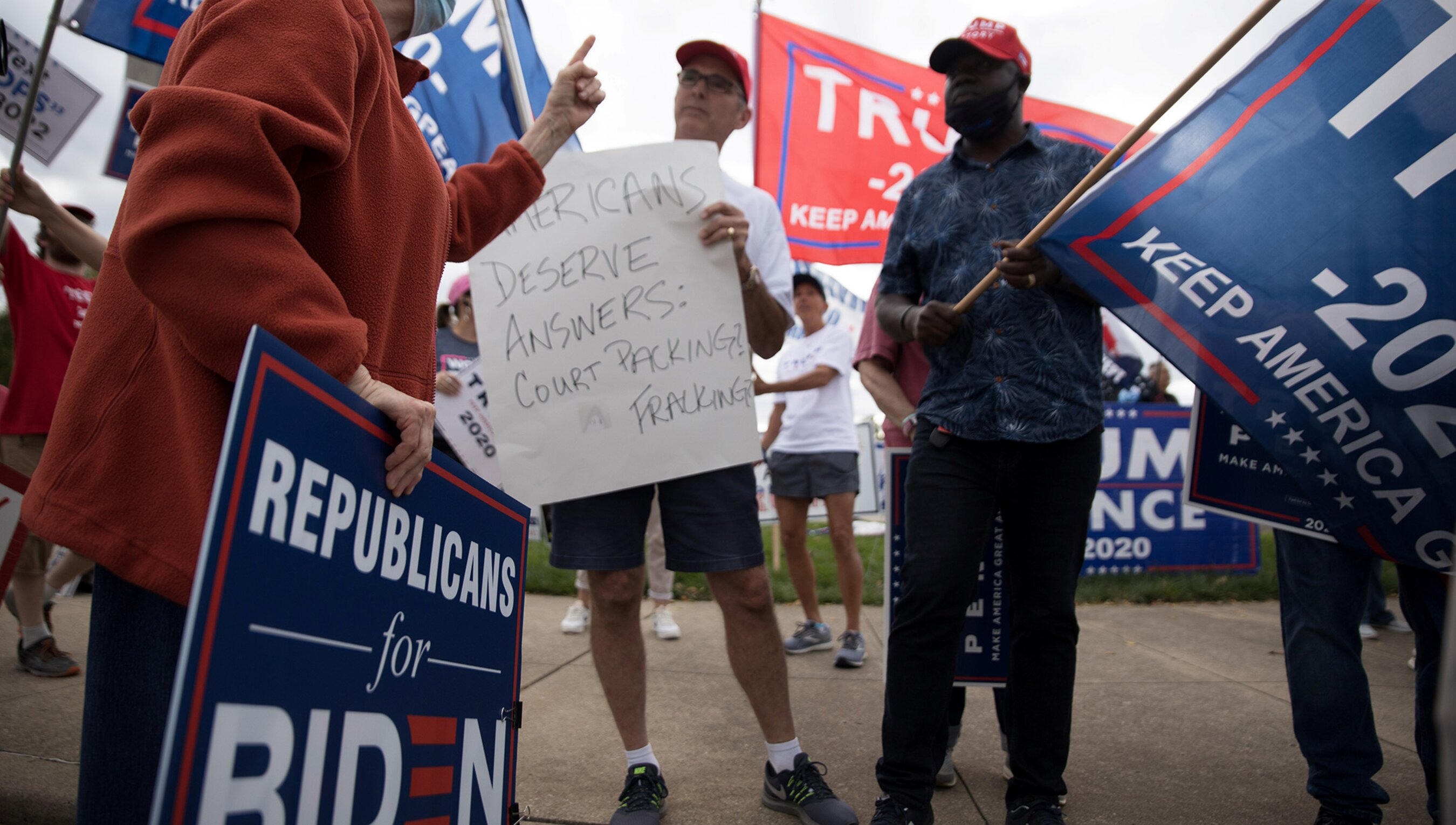 A Republican supporter of Joe Biden argues with supporters of Donald Trump as they protest outside a campaign event held by the US Democratic presidential candidate in Cincinnati, Ohio, on 12 October 2020. Photo by Megan Jelinger/Reuters

When is it ethical to vote for ‘the lesser of two evils’?

A Republican supporter of Joe Biden argues with supporters of Donald Trump as they protest outside a campaign event held by the US Democratic presidential candidate in Cincinnati, Ohio, on 12 October 2020. Photo by Megan Jelinger/Reuters

is an associate professor of philosophy at University College London. He writes regularly about social and political philosophy.

We’re often confronted with a choice between acting in a way that expresses our deep-seated values and ideals, and acting in a way that promotes a better outcome in the here and now. Imagine you’re a veterinarian who volunteers at an animal shelter, and you’ve been informed that the shelter is going to start euthanising pets that aren’t rehomed. The boss wants you to carry out this unenviable task. What should you do? Agreeing will violate the ideals that compelled you to volunteer in the first place. But if you quit, the euthanising will still happen – and might very well be less humane than if you were doing it.

A more familiar context in which this problem presents itself is at the ballot box. Suppose you believe the state should look after the wellbeing of the poor and combat the structural forces that enrich the wealthy. Suppose you’re in a two-party electoral system, and that the party notionally aligned with your ideals made a Faustian pact with business elites to shore up the policies that perpetuate poverty – low minimum wages, tax incentives for rent-seekers, privatisation of public services, etc. What kind of ballot should you cast? You can’t vote for the party pushing things further to the Right. And if you don’t vote, or you vote for someone who’s almost certain not to win, you’re helping that same regressive party get elected. Yet lending your support to the ‘lesser of two evils’ candidate, whose platform you don’t really support, feels like an unacceptable compromise to your ideals.

The moral dilemma behind these scenarios is the subject of a well-known argument in moral philosophy. Bernard Williams argued that you should care about maintaining integrity in your personal ideals – not necessarily at all costs, but at least a bit. That’s because you have a special proprietary responsibility for acts you perform. Those choices and acts are, in some special sense, yours, distinct from outcomes that result from combining your choices and acts with everyone else’s.

To the veterinarian and the voter, Williams would say: you shouldn’t feel pressure to act against your ideals in order to promote the lesser of two evils. Don’t euthanise the animals. Don’t vote for the front runner. You are responsible for the acts you do, not for everything that they lead to. If you quit and those animals suffer more, you aren’t responsible for this; your boss is. If a demagogic president remains in power, that’s not your fault.

But perhaps you find this way of thinking a bit spineless, or even a bit lawyerly. ‘The outcome wasn’t fundamentally my fault’ seems like a feeble excuse for something you could have helped to prevent, if you had just suspended your scruples for a moment. It sounds like the special pleading of a moral narcissist – someone who cares more about preserving an unblemished moral record than about making the world a better place.

Williams acknowledges this concern, and he agrees that integrity matters little when you’re just trying to maintain the warm, fuzzy feeling of being a flawless do-gooder. The significance of integrity runs deeper than this, though. If you allow the shelter bosses of this world to dictate the choice architecture within which you and others make decisions, you grant them an agenda-setting prerogative that is rightly yours, as much as it is theirs.

How might this play out in the voting case? How people respond to Williams’s dilemma could well be a decisive factor in the 2020 US presidential elections. As much as Donald Trump’s re-election would be a disaster for the United States and the world, some progressive voters are reluctant to vote for a Democratic candidate whose broader agenda they reject, whose nomination was arguably a stitch-up, and whose one strong selling point is that he isn’t Trump.

Williams’s ideas about integrity suggest that someone who’s reluctant to follow a lesser-of-two-evils strategy needs to at least interrogate that instinct. If you’re genuinely trying make the world a better place, Williams says, it isn’t enough to simply promote the good within the limited range of choices you’re being offered. You need to try to become someone who actively builds those choices, shaping which outcomes result from which actions. And that means taking on projects and principles that you mean to live by – even if this might produce undesirable outcomes in the short term.

Compare a fervent keyboard warrior – who has all the right-on takes on principles of economic justice – with a community organiser working on the ground to combat poverty, and for whom these principles aren’t passive beliefs, but an active source of motivation. For the Twitter activist, there is nothing at stake, apart from integrity itself, in being uncompromising. And to treat one’s integrity, in that situation, as a higher priority than averting disaster seems like a serious case of moral narcissism. By contrast, for the community organiser, a vote ‘the other way’ might act as a genuine impediment to their other world-shaping endeavours.

So, in deciding whether to compromise your ideals, or whether to take a stand, you might ask yourself: ‘Will this compromise undermine projects that I’ve committed to, through which I’m actively trying to make the world a better place?’ (In which case: stand by your principles.) ‘Or are my ideals and principles simply idle, such that a moral compromise wouldn’t affect any projects actively in train?’ (In which case: act so as to promote the lesser of two evils.) The immediate payoff of this approach is that it gives a framework for people whose ideals make them reluctant to vote for the lesser of two evils, but who don’t have any real commitments or projects fuelled by those ideals.

But are things really so different for the community organiser? It’s easy to question the psychological self-understanding of someone who thinks her endeavours will be compromised if she wavers on any of the animating principles behind them. ‘Your projects will be fine!’ we want to say. ‘You can keep lobbying, educating, organising, protesting, cultivating solidarity with like-minded people, et cetera, et cetera. All you have to do, privately, is tick a different box. (And maybe go easy on trashing Uncle Joe for a few weeks.)’

Achieve whatever can be achieved via the ballot, while being ready to combat injustice via other means where necessary

Or, if this person is desperate to maintain an alignment between her choices, projects and principles, maybe she could tweak her projects slightly, as per the suggestion of some of Williams’s critics. Why not change her project of being an aim-for-the-best anti-poverty activist, into the slightly different project of being a limit-the-damage anti-poverty activist? Is the former so special and sacred that this adjustment would be unconscionable?

Surely not. But you can have reasons for being unwavering in your principles, without thinking those principles are perfect. Young Turks who become wishy-washy moderates often get there through a series of incremental compromises. This is a natural result of the fragile psychology of commitment. Just as a few cigarettes or doughnuts can unravel months of self-discipline, a retreat to lesser-of-two-evils pragmatism can undermine one’s sense that it’s worth aiming for the best in the first place. And there’s a long history of savvy political actors tactically pressing on the urge to compromise, as a way of quelling and ultimately disarming revolutionary opposition to unjust systems.

We know what happens if we apply a lesser-of-two-evils voting strategy over and over. It pushes all meaningful anti-poverty policies off the political agenda. If nominally progressive parties can take for granted anyone who cares about economic justice, they lose any incentive to shift their policies. To vote for the least-worst candidate, under these conditions, is to validate something verging on a sham democracy – a power struggle between two factions of the ruling elite.

Following in Williams’s footsteps, then, there is something to be said for remaining ideologically intransigent. In some cases, there’s a credible motivational logic to prizing your integrity, and declining to cast a pragmatic vote. Being high-minded about ideals and principles is a way of undermining the suboptimal choice architectures the world has handed to you, and instead promoting structural transformation.

At the same time, we should reflect carefully before putting ourselves in this box. The US civil rights activist Malcolm X was as mindful as anyone of the problems with a politics of wishy-washy compromise. He argued that a continued failure to address racial injustice via legislative reform would ultimately necessitate revolutionary violence. But his advice wasn’t to abstain from voting. It was to achieve whatever can be achieved via the ballot, while being ready to combat injustice via other means where necessary.

Nonvoting conscientious objectors would do well to remember this. While acting in line with your principles is a good thing, in certain scenarios, that’s because it embodies a type of indirect strategy for making a positive impact in the world. For most of us, that aim speaks in favour of using our vote on the least-worst option. For a committed few, it means using our vote (or nonvote) to send a message about the urgency of the principles that the leaders of ‘our’ side have broken faith with. But it doesn’t mean doing nothing – and we should be wary of anyone portraying their desire to sit things out as a mark of integrity. That is to misunderstand why and how integrity matters in the political morality of citizenship.