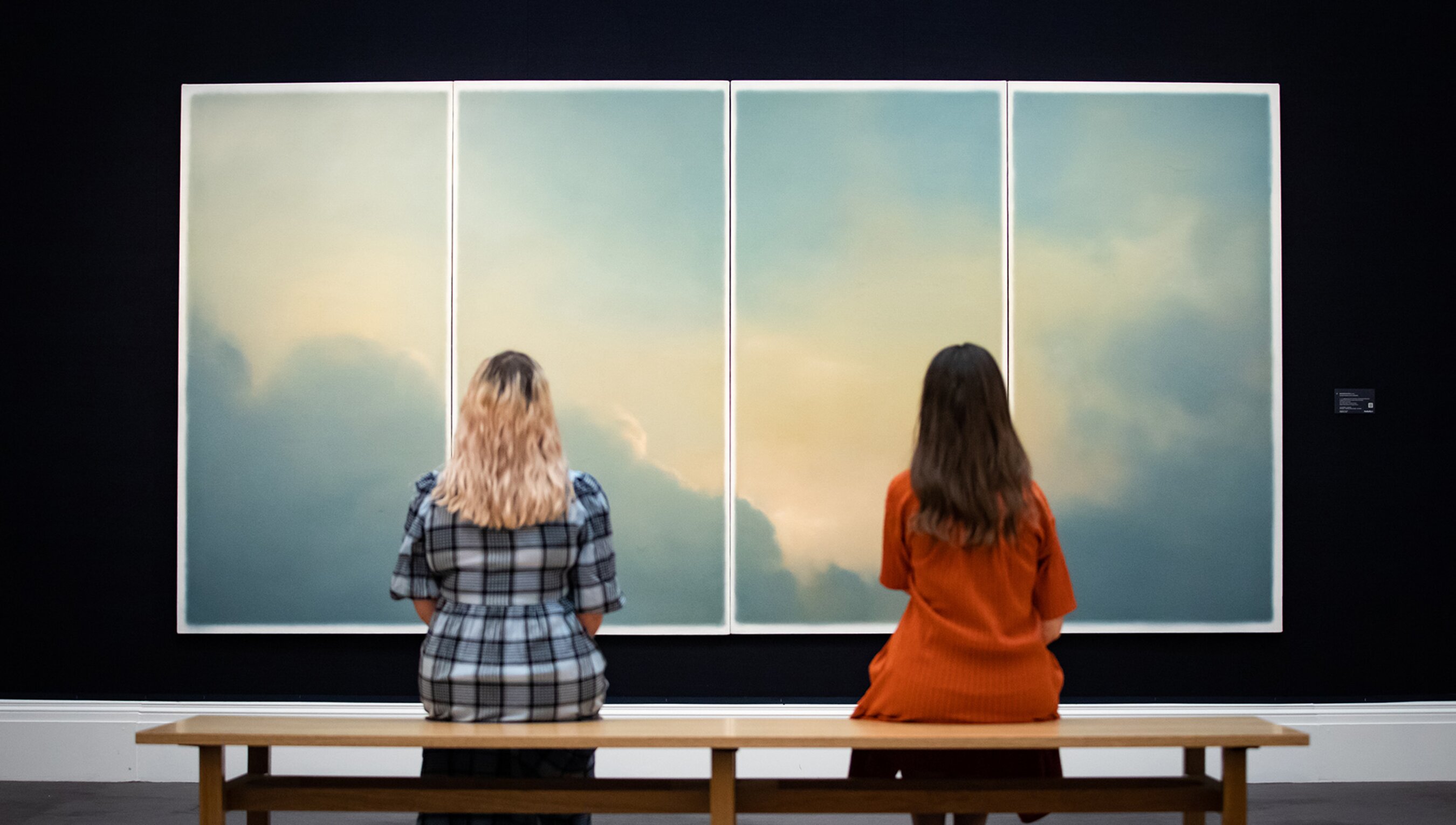 You can be aesthetically sensitive and know nothing about art

is a researcher in psychology who teaches at the Universidad Camilo José Cela in Madrid. His research is focused on empirical aesthetics, and he has published in journals such as Psychology of Aesthetics, Creativity, and the Arts and the British Journal of Psychology.

A woman stands in front of a piece of art she finds delightful and thinks about buying it. Elsewhere, a couple is choosing between different coloured mugs for their new home. In a zoo, a chimpanzee uses his hands to select images on a screen as part of a task some scientists have prepared for him. All these primates have something in common: they are using their senses to select between stimuli based on the value they ascribe to different visual features. You might say that they’re all having an aesthetic visual experience.

People are fascinated by the process through which perceiving can sometimes bring us pleasure and even joy in this way. We’ve made a huge industry out of it, and aesthetics permeate almost all aspects of human life.

Yet while aesthetic experiences are universal, most people would probably agree that some of us are more aesthetically sensitive than others. But what does that really mean? In casual conversation, we’ll make claims such as This car is beautiful, and we’re prone to thinking that there is something inherent to the car that makes it aesthetically pleasing. From there, a logical deduction is that aesthetic sensitivity describes the ability to detect and appreciate beauty wherever it exists. However, I believe that the ‘beauty’ is not in the car itself, but in the perceptual processes that end with a pleasant or unpleasant visual aesthetic experience. Moreover, I don’t see aesthetic sensitivity as the ability to recognise some externally prescribed standard of beauty, but more to do with how attuned a person is to perceptual changes.

To help explain my position, let me tell you about a game my partner and I play: we love nothing more than watching a stylish movie and debating which is the most aesthetically pleasing scene (Mad Max: Fury Road is our favourite for this purpose). When we strongly disagree, it’s tempting for us to think that it’s because the other person is just wrong and lacks the ability to see the true beauty in the scene (by the way, in Mad Max, I vote for the one with the exploding cars!) Obviously, this is just a hobby, but it captures some implicit ideas on beauty that have long existed in the scholarly literature – the idea that it is objective, subject to standards, and detected via some kind of unitary trait or skill related to aesthetic sensitivity and evaluation.

These ideas about objective and identifiable aesthetic quality have long been present in our everyday conversation. They gained traction in works published early in the 20th century by influential figures such as the American psychologist Norman Meier and the English educational psychologist Cyril Burt. According to this view, beauty is placed in the object and we humans uncover it. If you’re unable to uncover the beauty, well then – you’re not aesthetically sensitive: you lack the ability to reach it. A sensitive person knows how to judge correctly a piece of art.

In the latter half of the previous century, the German-born British psychologist Hans Eysenck proposed a test for measuring this ability, in which participants had to decide which of two artworks in a pair was better designed. He collaborated with the German artist Karl Otto Götz who made some simple, black-and-white geometric paintings and then modified each one to make a deliberately inferior version. Together with colleagues, the pair displayed both sets of art to volunteers, and those who correctly identified the ‘good’ pieces were considered more aesthetically sensitive.

Based on this approach, Eysenck defined aesthetic sensitivity as a biologically determined ability to appreciate objective beauty. He believed that this ability was distinct and independent from other traits and skills. According to this framework, aesthetic sensitivity can be determined by comparing an individual’s judgments against some established artistic canon.

People’s aesthetic experience is what’s relevant, not some conception of objective beauty

My research group recently challenged this conception of visual aesthetic sensitivity. We propose that your visual aesthetic sensitivity is not about the accuracy of your judgments of beauty per se, but rather the degree to which some aesthetic features do or don’t trigger a change in your liking of a visual stimulus. By our account, if you’re highly aesthetically sensitive, then it requires only subtle changes to affect your experience of a visual scene or object.

We’ve tested this by presenting volunteers with stimuli that varied in some visual feature (symmetry, balance, curvature and complexity) and asking them how much they liked what they saw on a scale from 1 to 7. Consistent with our predictions, we found that, whereas some people needed a big change in the image to make a change to their evaluations, others needed only a subtle shift to change their liking. So we understand aesthetic sensitivity as the degree to which people’s likings are affected by the stimuli, not by whether they judge those stimuli correctly or not. In our conception, when more aesthetically sensitive people look at a visual stimulus, they need less change in its qualities to sense and report an effect on the amount of joy they feel.

Based on these preliminary findings, we’ve proposed a framework in which people’s aesthetic experience is what’s relevant, not some conception of objective beauty. This means that there are differences in the sensitivities of people’s aesthetic taste, quite separate from any supposed external standards. Importantly, we also found that aesthetic sensitivity as we define it generalises. That is, people’s sensitivity to visual features is independent of the type of image, whether we tested them with abstract patterns or pictures of real objects. Taken altogether, our line of research changes the very meaning of what it is to be an aesthetically sensitive person.

Returning to Mad Max: Fury Road, my partner and I are similar in that we have a strong reaction to different scenes, finding some more aesthetically pleasing than others. We don’t always agree, but we do appreciate the differences. The same visual features of each scene affect us differently. But importantly, changes in each feature trigger in both of us a range of affective and perceptive processes. I believe that we are highly sensitive to these visual features but in different ways because of a mix of factors, including our past experiences and the emotional associations we’ve formed with the features, our contrasting motivations, and the individual ways in which we process the stimuli. But, despite those differences, what we have in common is a shared sensitivity to the features.

Of course, even if we can agree about what aesthetic sensitivity is, this still opens up many more questions, not only to do with why some people are more aesthetically sensitive than others – and whether this sensitivity can be trained, learned or developed – but also about the differences between people’s preferences and why some people are attracted to some features and others aren’t. Our aesthetic experiences are built upon our internal states, our motivations and the wider context at the time and in our personal history. Scientists are busy looking at the specific interactions of these various factors and how they give rise to aesthetic experiences. We do know that the construction of aesthetic experience is based on various basic elements that are found across cultures, such as contour, balance, symmetry and visual complexity, but the personal meaning of these simple visual features is culture-specific and influenced by personal experience.

So, people vary in how much they’re affected aesthetically by changes in visual features, and I call this aesthetic sensitivity. While many questions remain, this much is clear – if we want to make a significant step in the knowledge of human visual aesthetics, we must leave behind the old ideas about beauty being inherent in objects, and instead embrace the idea that beauty exists within us.

Beauty and aestheticsJoyPhilosophy of art
18 November 2020