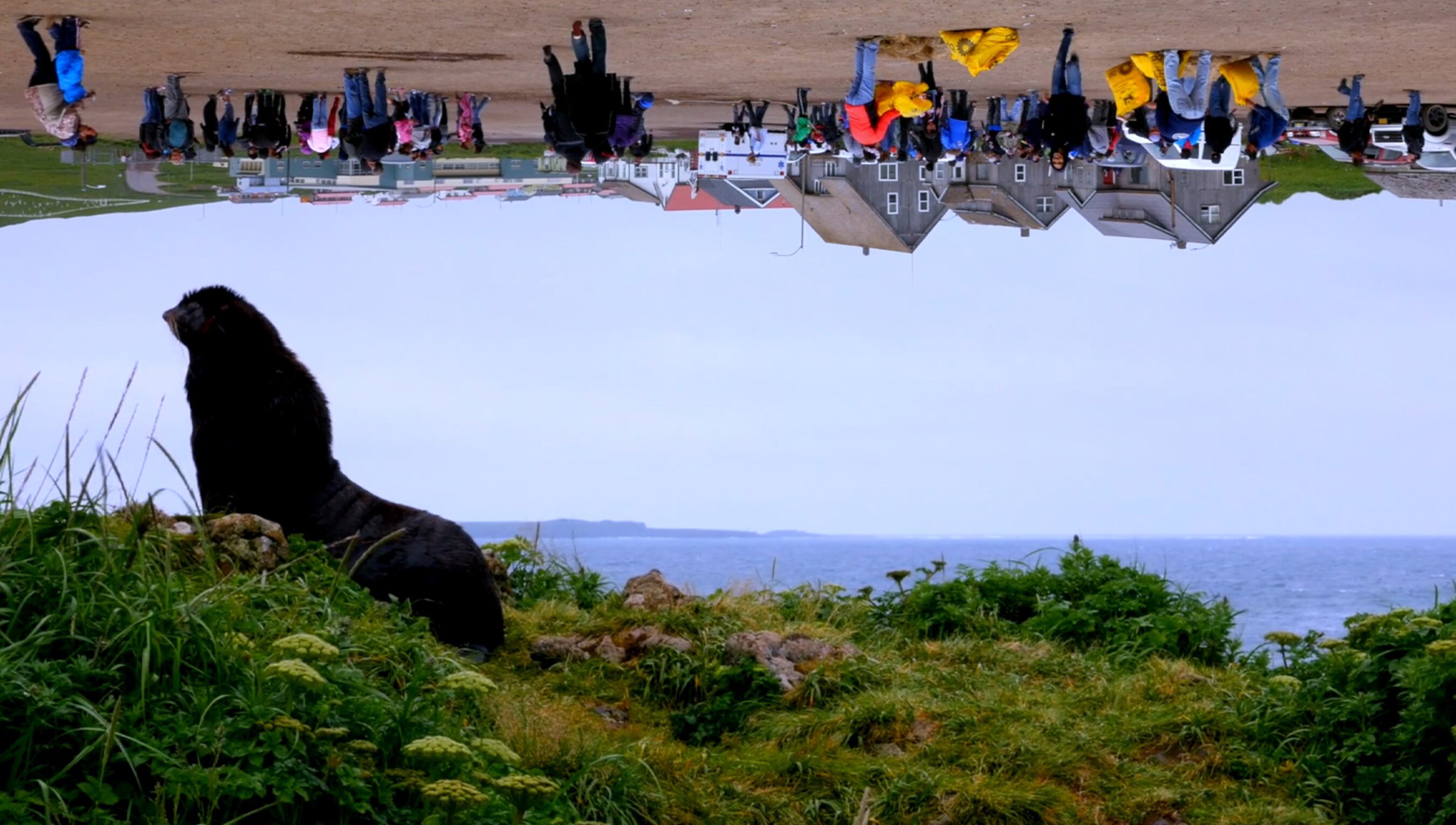 Visions of an island

Visions of an Island is a film that refuses to give up its secrets. It enchants with a textured layering of images, sounds and rhythms, luring us in with fragments of information and snippets of story. But we’re always left wonderfully mystified.

The work of the filmmaker Sky Hopinka, a member of the Ho-Chunk Nation and a descendent of the Pechanga Band of Luiseño Indians, the film is simply (in his words):

An Unangam Tunuu elder describes cliffs and summits, drifting birds, and deserted shores. A group of students and teachers play and invent games revitalising their language. A visitor wanders in a quixotic chronicling of earthly and supernal terrain. These visions offer glimpses of an island in the centre of the Bering Sea.

One could also say that Visions of an Island is an experimental film that explores questions of an indigenous history, culture and language in relation to place. But this misses something essential, because it erases how the film is trying to say both what it is and what it’s about. Hopinka’s own description does something very different – it embodies an ineffable quality central to the experience of watching the film. This is not to make a pedantic point about words or analysis failing to convey a cinematic experience (though questions of language and its limits are central to Hopinka’s work). Rather, it’s that the film’s very substance is to frustrate any facile path through it.

If we add some details and specifics to Hopinka’s own description, they could go like this: the Unangam Tunuu elder is Gregory Fratis Sr, a member of the Aleuts, a people indigenous to the Aleutian Islands, which lie in the Bering Sea between Alaska and Kamchatka, and were sold by Russia to the US in the Alaska Purchase of 1867. The island is Saint Paul, which was permanently inhabited only in the 18th century when Russians forced Aleutians into slavery to hunt seals. Saint Paul is one of the Pribilof Islands, which have the greatest number of living speakers of the Eastern Aleut dialect.

All this factual information is interesting and adds to what we see, but very little of it is in the film. Moreover, knowing it all hardly unravels the beautiful, dense fabric of sound and image that Hopinka weaves. Clues litter the film but, again and again, the thread is impossible to follow.

Fratis seems about to give us a history of the island, but we end up with descriptions of what he’s seeing and his own voice overlapping itself as he speaks bird names. The language game that Hopinka references in his description unfolds in a way that makes its rules increasingly baffling as the word ‘rock’ is repeated in different sentences. Later, another game involving an actual rock, but no words that we can hear, cuts off just as its rules start to come into focus.

Fascinating things happen to images, too. Sometimes they double up on themselves, sometimes the sky ends up between a ground that’s above and a ground that’s below. There are repeated motifs – the circular structure that begins and ends the film, light from a low-hanging sun coming through windows, undulating water and undulating grasses. Though frequently striking and beautiful, none of these choices coalesce into a set of obvious symbols or meanings. One can notice them or not.

In an interview with the Ojibwe filmmakers Adam Khalil and Zack Khalil, Hopinka explained that when he’s making a film and thinking about his audience, ‘it’s always my tribe or my family or a group of people who may have access to information that others do not’. For Hopinka, this is a rejection of ‘Western entitlement around knowledge, this idea that if something exists, then we have a right to know about it as scientists, scholars, academics … that just because … something has the opportunity to be studied or documented, then it should be.’ It’s also an active and activating engagement with his chosen audience, a stance refreshingly counter to so much conventional thinking about audiences that limply holds up an ideal of the ‘universal’ – too often a euphemism for white or male.

But Hopinka isn’t merely using insider/outsider questions to make political and sociohistorical observations. In the same interview, he says: ‘I like the idea of knowing and not knowing, when you know that something’s there but you don’t know what it is.’ There’s a palpable sense that Hopinka means this about himself as well as his audience, that he’s exploring not knowing as a way of being. Perhaps the visitor in his description of the film is in fact himself, questing after something that forever eludes him.