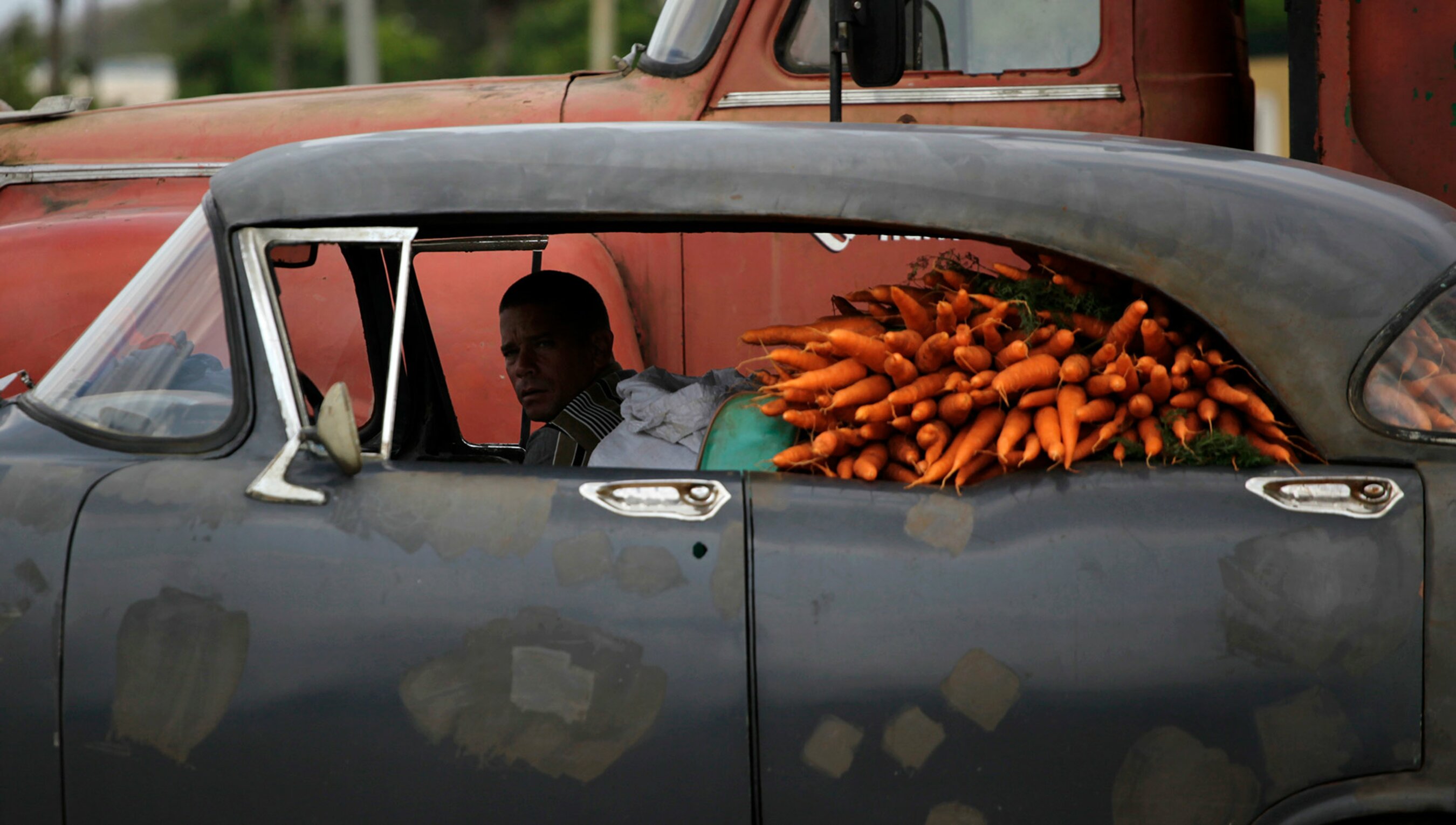 Do you have a duty to tell people they’re wrong about carrots?

is a research fellow at the ArgLab, the Reasoning and Argumentation Lab within the Institute of Philosophy at the NOVA University of Lisbon in Portugal.

is a collaborating member of the ArgLab in the Institute of Philosophy at NOVA University of Lisbon in Portugal.

We’ve all been there. You’re minding your own business, when you overhear a colleague mentioning the recent increase in the price of carrots. ‘They’re 70 cents a kilo now,’ he might say. You know he’s wrong, though not by much: carrots cost 50 cents per kilo last time you checked, not 70 cents as your colleague seems to believe. Or perhaps you’re standing in line at the post office, and you hear someone nearby telling a friend that the pope’s middle name is María. You know she’s wrong, too. The pope’s middle name is really Mario. These may seem like small mistakes – so small that speaking up could seem more trouble than it’s worth.

However, you may reach a different conclusion if someone expresses a false belief concerning a matter of great (or at least greater) importance. It might be a social media discussion about whether an election was stolen, or a friend casting doubt on whether Augusto Pinochet was a brutal dictator. It may be a neighbour worrying that a vaccine approved by international health agencies changes our DNA, or a Twitter bot calling into question whether the Holocaust really happened. It may be your boss ‘joking’ that feminists are just man-haters in disguise.

These are not small mistakes. In fact, you may think the subject matter is too important and the other person’s belief too distant from the truth to remain silent. Even so, deciding whether to object can be complicated. You might worry about offending someone, or lack the time to articulate your disagreement. You may even find yourself in a conversational context so polarised that introducing an objection will likely backfire.

But sometimes there are better and stronger reasons for voicing our disagreements with others. Sometimes we have an outright obligation to do so. You probably should correct your friend, even if speaking up strains your relationship, when they claim that Pinochet was brought to power in 1973 by a democratic election, rather than a US-backed coup d’état. And you probably should risk alienating your nextdoor neighbour when she recounts advising her family members against vaccination because she thinks that a vaccine developed at ‘warp speed’ is dangerous. But how do we decide, in any given situation, whether to pipe up or instead let a false, unwarranted, misleading assertion pass?

False, unwarranted beliefs are precursors to harmful consequences … we should, when feasible, prevent others from being harmed

Of course, it isn’t always appropriate to correct someone’s false beliefs: ‘Testifying to all [our] disagreements would be weird, rude, and exhausting,’ as the philosopher Casey Rebecca Johnson aptly puts it. Interrupting a private conversation between two colleagues only to pedantically set them straight about the price of carrots would likely violate other obligations we simultaneously hold, for instance to be polite, or to respect others’ privacy. Conversely, politeness may become a secondary concern if those same colleagues are in the agricultural trade where being aware of even minor price changes is of great practical importance.

Or imagine, as the philosopher Jennifer Lackey invites us to do, that ‘a tenured, white, male professor hears a fellow colleague make a clearly sexist remark’. Lackey argues that it is more important that the professor make his disagreement known, rather than remaining silent to avoid ruffling feathers. Moreover, given his social position and identity, ‘his duty to object might be greater than that of his Black, female, junior colleague.’

When it comes to objecting to or correcting a false or unwarranted assertion, context matters. And context can mean: who we are, who the speaker is, what the assertion is about, the situation in which it is uttered, and how others witnessing the assertion respond. These are all considerations that should be factored in and weighed against one another as we deliberate whether or not to voice our disagreement.

With so much complexity involved, we may wonder: is the duty to object worth taking seriously?

It is. There are two reasons why. The first is that false, unwarranted beliefs are precursors to harmful consequences. The second is that we should, when feasible, prevent others from being harmed.

Suppose that a friend’s main source of income is the sale of carrots. We happen to know that she mistakenly believes them to be more expensive this week and will therefore suspend her usual order from her provider, which will lead to reduced sales and financial loss. Suppose we also know that she acquired this false belief because her regular source of information about wholesale vegetable prices is untrustworthy. If our friend continues to rely on this testimony, her livelihood could be negatively impacted. In other words, if she remains in her current epistemic state – if she continues to believe that the price of carrots has gone up, and that her source is trustworthy – she will suffer harmful consequences. So, if we can correct our friend’s beliefs, and doing so is not an especially demanding task, then we should speak up to prevent our friend from being harmed.

If I relay my neighbour’s poorly justified vaccine-sceptical advice to a student who believes what I tell him, I am doing something wrong

A practical harm could involve losing money, being fired from a job, or being physically injured. But what does it mean to say that someone might be harmed epistemically?

To understand this form of harm, it’s helpful to think more generally about the concept of epistemic wellbeing. Typically, we want to avoid entertaining false beliefs. We want as many of our beliefs as possible to be as close to the truth and as well supported as possible. Why else would we incentivise learning, celebrate intellectual advances and accomplishments, reward correct answers, or prize knowledge over ignorance? Crucially, we do all these things not out of uncritical habit but because we recognise that knowledge and understanding are key ingredients of our intellectual wellbeing, and their pursuit a virtuous endeavour. And so anything that stands in the way of our beliefs being true and justified puts us in (epistemic) harm’s way. This means that entertaining beliefs that are true and justified isn’t just a noble aim, it’s a goal we ought to actively pursue: an epistemic duty.

Some of our epistemic duties are to ourselves. If I unquestioningly believe my neighbour’s claim that drinking two litres of orange juice every day guarantees immunity to COVID-19, even though I know she has no medical training and that she relies on her non-expert social media peers for information, then I’m doing something wrong. I’m being negligent and doing a poor job of ensuring that my beliefs are justified.

But there is more to our epistemic duties than mere self-interest. Suppose I’m a schoolteacher, trusted by my students. And suppose I relay my neighbour’s poorly justified vaccine-sceptical advice to a student who believes what I tell him. In this case, I am also doing something wrong. If my student entertains a false belief after our exchange, and entertaining false beliefs is harmful, my testimony has put him in epistemic harm’s way.

In fact, my poorly justified advice might produce a second and subtler harmful consequence. Since my testimony is in flagrant contradiction of the advice given by public health experts, there is a real possibility that the latter’s credibility will be diminished in my student’s eyes. My advice could weaken his trust in genuinely competent testifiers (such as public health authorities), and so limit or damage his access to an indispensable source of justification for his beliefs about public health.

We must be epistemically vigilant. And we should look after the epistemic wellbeing of others

This is acutely important because we habitually rely on others’ testimonies as a source of information and to justify our beliefs. Much of the time this works well because we can usually trust what others say. It also works well because we can rely on more than one source of justification to verify information. For example, if you’re in charge of determining how much each person owes for a restaurant meal, and someone in your group is unconvinced by the number you came up with (perhaps because you were clearly distracted), they can ask another member of the group to verify your answer.

But things become more complicated when it comes to matters that lie outside our sphere of expertise. If neither my student nor I are public health experts, then we both crucially depend on those who are, if we want to form warranted true beliefs about public health matters. This is sometimes referred to as the novice-expert gap. As the philosopher Helen De Cruz argues, when non-experts ‘don’t know whom to trust’, this gap becomes very difficult or impossible to fill.

So if my student regards me as an epistemic authority, and I abuse that authority by contradicting – and therefore discrediting – the testimony of public health experts, then I risk compromising his access to vital trustworthy testimony. Doing so would violate my obligation not to epistemically harm others.

And what about our carrot-buying friend? She too was put in epistemic harm’s way by an untrustworthy informer. Here, though, we have a chance to put things right: when she claims that her source is trustworthy, we can voice our disagreement. And since we can, we should: we ought to prevent (or rescue) her from mistakenly regarding her informer’s testimony as a source of justification for her beliefs.

In an age of rising misinformation, as navigating expert testimonies becomes ever more difficult, we must be epistemically vigilant. We must be careful when it comes to our own beliefs. We shouldn’t treat gossip and speculation as fact. We should be wary of far-fetched explanations. And we should also look after the epistemic wellbeing of others (when feasible).

Sometimes, we have an epistemic duty to speak up. Even when it makes us uncomfortable. Even when it seems rude, weird or exhausting. And even when it’s about something as seemingly unimportant as the price of carrots.