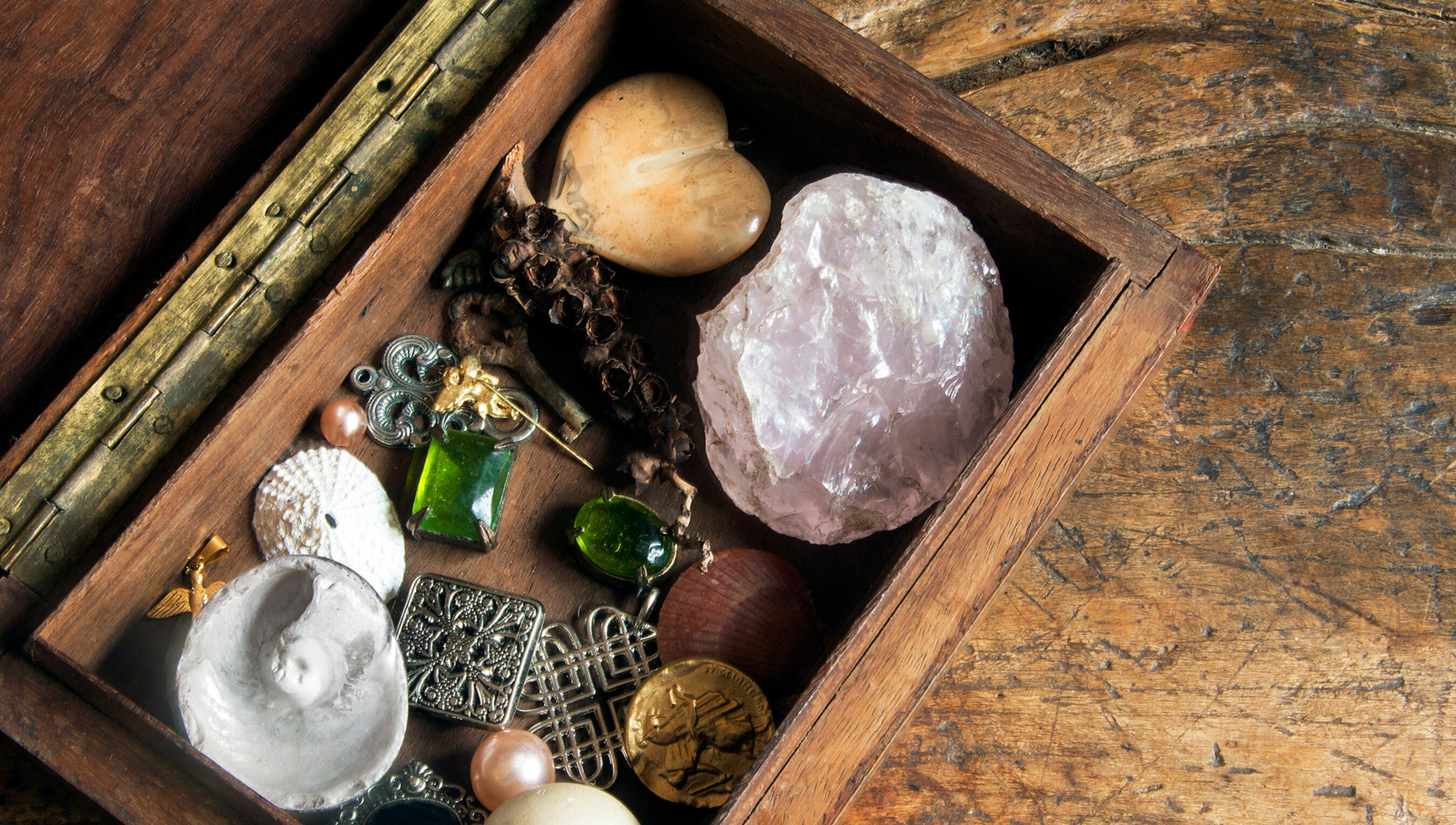 In hatboxes, pouches and bags lie the items that define us

is a research assistant at the Institute for Cultural History and Theory at Humboldt University of Berlin. He is the author of Das verschachtelte Ich (2020; ‘The Boxed Self’), a book on how people use containers to create their selves.

In Carson McCullers’s novel The Heart Is a Lonely Hunter (1940), Mick, a teenage girl, owns an old hatbox that she keeps hidden under the bed. The box contains personal valuables, ‘three mystery books her Dad had given her, a compact, a box of watch parts, a rhinestone necklace, a hammer, and some notebooks. One notebook was marked on the top with red crayon – PRIVATE. KEEP OUT. PRIVATE – and tied with a string.’ This strange assortment of things is of little material value, but of immense sentimental importance. The hatbox is her own small space, where she keeps the things that make her who she is.

Many people own such a shoebox, a drawer or some kind of chest in which they keep the things that are of strangely intimate value. The idea of these small spaces that contain things of high personal value is an overlooked part of Western culture. Although this kind of property is hardly ever talked about, it implies a concept of ownership that differs from the dominant idea of property: what has been known since the Enlightenment as ‘private property’. Look around, and you will hardly be able to find something that is not in some way possessed by some person or institution, even if you don’t know the exact details. It’s almost as if every object in our culture is invisibly stamped with the name of its owner. And, even more remarkable, all these things belong to people or institutions in the same way. No matter whether it’s a city street sign, or the car standing next to it, or the sweets on its dashboard, or the shares in the company that built that car – all these things are privately owned. And they are owned because people bought them or made them or received them as a gift, which means that they are embedded in a system of exchange between owners.

The problem is that this view of private property conceals a number of different ways in which people relate to things. Mick’s hatbox and its contents can indeed be classified as her ‘private property’, but somehow that doesn’t feel quite right. These things are connected to her in a more intimate way than simple ownership. They somehow take part in constituting her personality.

History and literature are replete with these small, personal spaces and, unless pointed out, they can be easy to miss. The art critic John Berger, in describing the migrant workers that were invited to Switzerland and Germany in the 1970s, noted how important their suitcases were to them. Cruel employers would sometimes deny the workers’ request to bring their suitcases into their makeshift dormitories, which could result in full-blown strikes – because it wasn’t just a matter of mere luggage. ‘In these suitcases they keep personal possessions,’ Berger writes, ‘not the clothes they put in the wardrobes, not the photographs they pin to the wall, but articles which, for one reason or another, are their talismans. Each suitcase, locked or tied round with cord, is like a man’s memory. They defend their right to keep the suitcases.’

Loculus is the perfect term for Mick’s hatbox, for the Kischten of the Hutterites, for all those nooks in which we keep the things we cherish

The Hutterites, a branch of the Anabaptists, hold their property in common. This is a different kind of ownership from the dominant, Enlightenment mode, though it’s one that can be seen in many families or communities that possess and use things together. But even among the Hutterites one can find those strange, small spaces. Upon coming of age, every Hutterite receives a ‘Kischte’ (Old German for ‘chest’). In these simple wooden boxes each person can store their personal things. Nobody is allowed to invade these ‘preserves’ of the self, as the sociologist Erving Goffman described these spaces in another context. The Hutterites would consider it deeply intrusive to try to find out what people keep in their Kischte, but there are reports mentioning things that are frowned upon or even forbidden in the strict Christian culture that surrounds these boxes: lipstick, cowboy boots, bras, even editions of Playboy. But, likely, most Kischten resemble Mick’s hatbox: filled with things of little or no objective value, but of the utmost importance to their owners.

One other example from antiquity is telling. The legionaries of the Roman Empire were heavily weighted down by their equipment. They didn’t just carry their weapons and provisions, but also entrenching tools and oak poles for the camp’s barricades. From their shoes to their clothing, their armour to their weapons, everything the legionaries carried was produced according to rigid standards. In total, their equipment weighed around 80 pounds, and it was all put to one particular use: to wage war for the Empire.

But there was one place legionaries were able to store personal goods: a small leather bag attached to their marching packs that looked like the satchels one still sees today. The name of this bag is suggestive. It is called a loculus, a ‘small place’. In a completely militarised and standardised environment, the loculus was reserved for a soldier to store some little parts of himself. Loculus – it’s the perfect term for Mick’s hatbox, for the Kischten of the Hutterites, for all those nooks in which we keep the things we cherish. It is the space for the stuff that’s really ours.

One could easily go on giving examples of these loculi throughout history, but the best ones come from our daily life. Whenever we leave home, we often take some kind of bag or backpack or purse with us. Look around during your next commute: almost everybody carries some kind of container, and the contents of each and every loculus are secret, even somewhat sacred. Simply asking about it – ‘Excuse me, sir, what’s in your briefcase?’ – would violate that person’s personal space. And it’s interesting how in some places – mostly those in which we share some kind of property communally, like libraries and museums – there are lockers for people to store their loculus in. If alien ethnologists surveying us from a distant star observed this custom, they could write a compelling dissertation on a remarkably strange species that centres much of its daily life around caring for its personal spaces and their contents.

My own bag, which I carry every day, contains my notebook, a novel, a few toiletries, my pencil case with my favourite pencil, and some things that are materially worthless but highly significant. All of that belongs to me in a most intimate way. In fact, they are my property in a much stronger way than more expensive things are, like my old bicycle whose colour I’ve forgotten, the candlestick I received as a gift but never really liked, the little stretch of woodland I might inherit someday but that I don’t even know the location of. My pencil is more mine.

In his essay ‘The Beginnings of Ownership’ (1898), the sociologist Thorstein Veblen moved away from private property as the basic mode of owning things. Instead, he describes ownership as a ‘zone of influence’ with a person at its centre whose ‘individuality shades off by insensible, penumbral gradations into the external world’. Veblen’s basic assumption is that ownership of things springs out of their daily and intimate use. If something is being regularly handled by someone, then the relationship of the person to the object somehow becomes ‘organic’. The examples Veblen gives for these organic things gradually move away from the body, but still belong to it: the shadow of a person, their name, their tattoos, their amulets and ornaments, their clothing, the tools and objects of their craft.

One could easily elaborate Veblen’s list. Isn’t my mechanical watch, which not only tells time but is also wound by my movements, something that is best described as my ‘organ’ of time-measurement? And isn’t my smartphone ‘mine’ in a much more intense way than most other things? Our clothing protecting us from cold and rain is something that we as naked mammals need, and my favourite sweatshirt thus becomes my personal organ of warmth. The pen I use for writing every day, my organ of writing, is so much a part of me that I would be reluctant to lend it to someone else.

Veblen writes that ‘Under the guidance of this habit of thought, the relation of any individual to his personal effects is conceived to be of a more intimate kind than that of ownership simply. Ownership is too external and colourless a term to describe the fact.’ He’s right. The intimacy and tenderness that we feel towards some of our things makes them something different than just private property.

The novelist Ursula K Le Guin perhaps put it best when, in the essay ‘The Carrier Bag Theory of Fiction’ (1986), she described our relationship with our things and our loculi:

If it is a human thing to do to put something you want, because it’s useful, edible, or beautiful, into a bag, or a basket, or a bit of rolled bark or leaf, or a net woven of your own hair, or what have you, and then take it home with you, home being another, larger kind of pouch or bag, a container for people, and then later on you take it out and eat it or share it or store it up for winter in a solider container or put it in the medicine bundle or the shrine or the museum, the holy place, the area that contains what is sacred, and then the next day you probably do much the same again – if to do that is human, if that’s what it takes, then I am a human being after all. Fully, freely, gladly, for the first time.