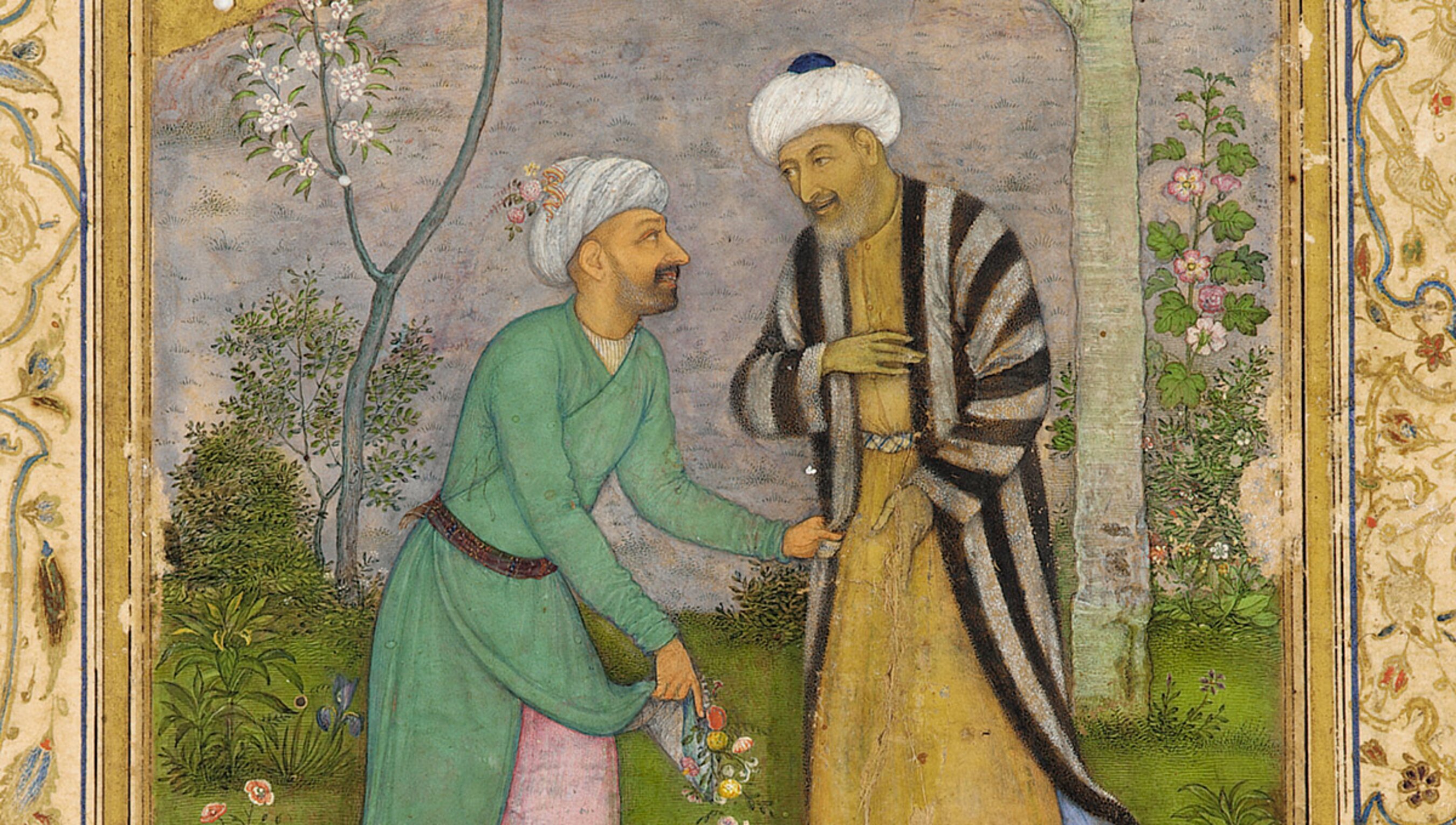 is associate professor of Middle Eastern, South Asian, and African Studies at Columbia University in New York. She is the author of Persianate Selves (2020).

In Persian, the word often translated into English as ‘manners’ or ‘etiquette’ is adab. However, adab is about far more than politeness or ethics even. It means proper social and aesthetic form and, across Persianate culture, form conveyed substance and, by extension, meaning.

From the 13th to the mid-19th century, Persian was the language of learning, culture and power for hundreds of millions of diverse peoples in various empires and regional polities across Central, South and West Asia. Persian was not the language of a place called Persia – this placename is used only in European languages (otherwise, the place is known as Iran), and using it as an adjective to describe its people obscures the fact that Persian-speakers lived in many other lands. Increasingly, scholars use ‘Persianate’ as the cultural descriptor of Persian as a transregional lingua franca. For six centuries, Persianate adab – the proper aesthetic and social forms – lived in this language through its widely circulated texts, stories, poetry: the corpus of a basic education. To learn adab, these particular forms of writing, expression, gesture and deed, to identify their appropriate moments, and to embody them convincingly, was to be an accomplished Persian.

The term adab existed in other, related languages, including Arabic, Urdu and various forms of Turkish spoken in Anatolia and Central Asia (Ottoman, Chagatai and Uzbek). But what was proper as aesthetic or social form was specifically constituted within particular language traditions – for example, generosity might look different in stories in a particular language, and be called for at differing moments. The educated and less educated across Eurasia were multilingual in varying ways, and these diverse traditions permeated each other, with language traditions circulating through storytellers, preachers, reciters, mendicant-poets and prayer leaders. However, in the Islamic east, across Anatolia, but especially beyond Baghdad after the 13th century, Persian became the language of new empires, linking these other traditions and constituting the core of adab.

The widely read and influential Gulistan (1258), or Rose Garden, by the 13th-century poet Sa‘di, for instance, was an exemplar of beautiful prose writing but also a model of social conduct. From the Balkans to Bengal, from southeast Asia to Siberia, the Gulistan was the first Persian book that children read as part of their elementary education. Throughout Persianate Asia, it was also studied well into adulthood. Sa‘di’s stories and style entertained readers, but they also instructed them in adab. Many could be amused and grasp the lessons only in limited ways (or not at all). But some could prove themselves as the possessors of heart (sahibdil, the heart being the seat of understanding), and grasp the text’s underlying wisdom.

The Gulistan’s chapters included mostly short prose vignettes or adages, with poetic verses underscoring their meaning. In the chapter on suhbat (the art of conversation and companionship; suhbat means both), we read:

Two persons have toiled in vain and laboured without benefit. One is he who has saved and not consumed, and the other is he who has learned and not acted.
No matter how much learning you acquire, if you don’t act, you are ignorant.
Neither scholar nor sage, he is an animal on whom are a few books.
What knowledge or awareness does that empty-headed one have? Is he carrying kindling or notebooks?

For certain things to come into being, they had to be enacted in the world. Here, for learning to truly exist, you needed to act according to it, to show it in the appropriate way. Otherwise, as Sa‘di explains, you were in fact ignorant, and your learning in vain. Learning didn’t exist separately from its expression. This was a matter of ontological being, before its moral and aesthetic status.

Adab was acquired through education. Learning enabled one to practise appropriate behaviours that, in turn, instilled desired dispositions. At the same time, not everyone could learn, or not to the same degree.

The challenge for the reader was to understand who needed education, and when to recognise that certain people couldn’t learn

The first vignette in the Gulistan’s chapter on the effects of education tells of a vizier with a ‘stupid’ son, whom he sends to a scholar for education. In spite of the scholar’s arduous efforts, the son remained as he was. The scholar, driven crazy by the attempt, sends the son back to the father. Sa‘di leaves us with three lines of verse, emphasising the point that all the effort in the world won’t make education have an effect ‘unless the base is essentially receptive’. The last verse is perhaps one of the most widely quoted in writing and speech when making the same point, a synecdoche of the vignette as a whole: ‘If you take Jesus’ ass to Mecca, when it comes back it will still be an ass.’

By contrast, the chapter’s next vignettes emphasise the importance of acquiring learning, especially for particular types of people, such as princes, the viziers who advise them, government officials and the scholars to whom the people look for wisdom. The challenge for the reader was to understand who needed education, and when to recognise that certain people couldn’t learn. Substance couldn’t always be known from factors such as birth or social location either. The vizier’s son was unsuited to follow in his father’s footsteps. This was a system of ethics that recognised people’s substantive differences – not all were cut out to be viziers.

To show possession of social adab, one had to know what to do and say in any given situation. This required knowing prized values, their relative relations to one another, and how to respond properly when positioned between more than one demand. In other words, to be a possessor of adab, a Persian had to know when to strive and when to accept, when to be silent and when to speak – and then how to speak the right way. Obviously, the adab – the conduct and speech appropriate in a given situation – wasn’t always straightforward, and sometimes the tension was the point. Those who could negotiate this tension most convincingly were the most admired (pointing to the always-present audience of other Persians). The terms were widely agreed upon among a wide swathe of people, from men of letters (such as poets, scholars and scribes) to men of power in this world (judges, officials, military leaders) and in the other, unseen world (such as Sufis), though there were frequent struggles and disagreements over interpretation on everything from politics, the meaning of history or even what constituted good poetry. Even among themselves, Sufis disagreed as to the proper path to God, and each path constituted its own Sufi order.

For instance, in 18th-century Delhi, the poet Hazin Lahiji, renowned for his public contempt of the Timurid court, put his fellow migrant, Valih Daghistani, an imperial servant, in an unenviable spot. Explaining how he negotiated an ethical course through conflicting obligations (with political ramifications), Valih remarks:

Though civility and fairness are essential to the dignity of a Shaykh, he [Hazīn] has flimsily lampooned all people of this region, from the king and nobles to everyone else, [and] acts unworthy of the dignity of a Shaykh. However much I tried to prevent him from this ugly behaviour, it was no use, and even now he persists. Necessarily, out of regard for loyal service to the king, the obligations of companionship with the nobles and other sinless acquaintances, having apologised, I have abandoned relations with that great and learned man, acting as though I had never seen him.

Here, Valih justifies himself in a biographical commemoration of Hazin that circulated widely across India and Iran. While he abandoned the great poet whom he had patronised, Valih showed himself a sahibdil, a possessor of understanding, by convincingly inhabiting the adab of ethical service.

Just as adab could separate two Shia Muslim men, it could bring others together across lines of difference, both within and across the great multiconfessional and multiethnic empires of the early modern, eastern Islamic world. It was the hermeneutical ground of meaning (including morals) through which Persians across regions and religious communities understood and enacted themselves, and related to other people and to their social collectives.