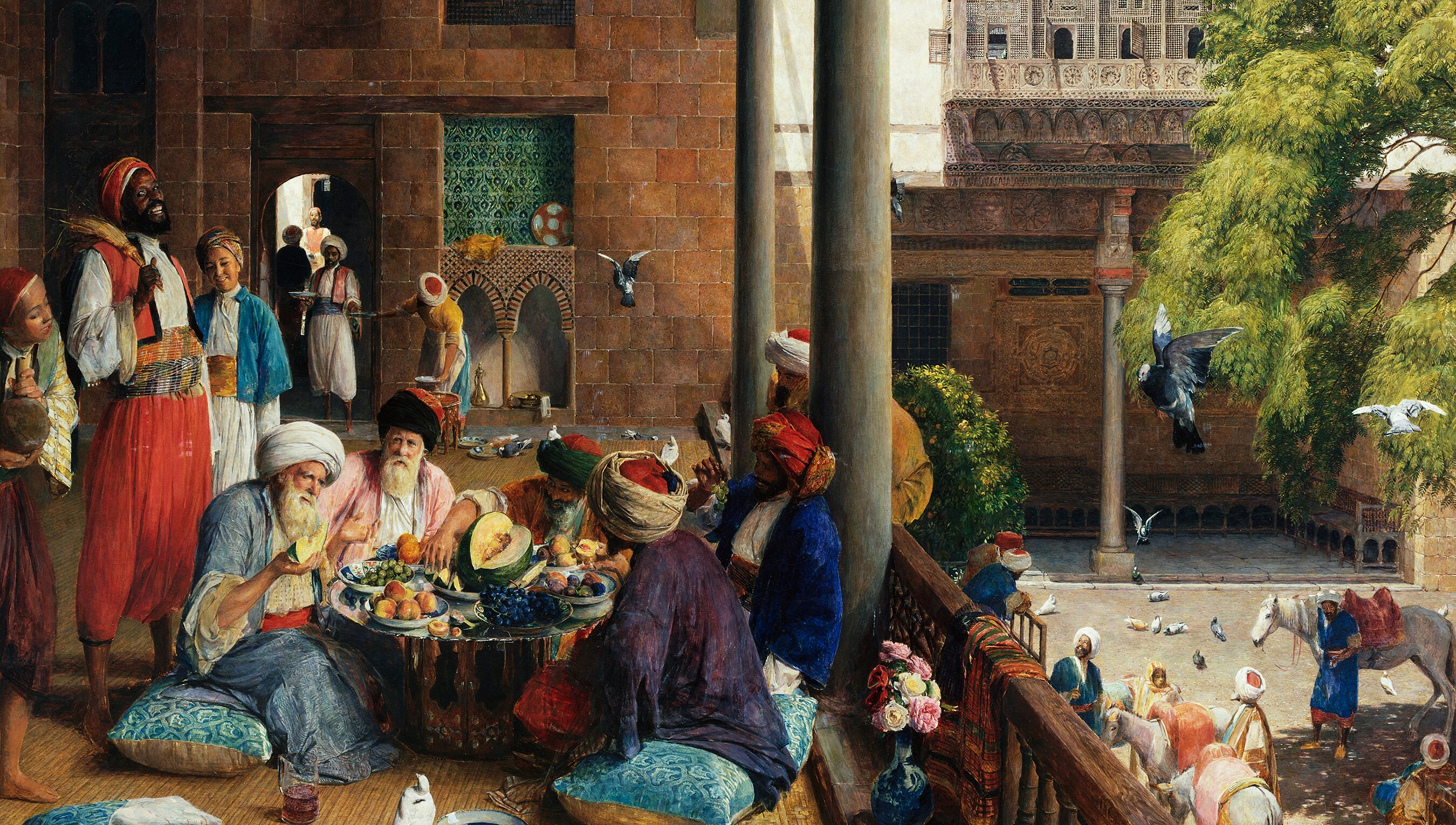 The allure of cosmopolitan languages to courtiers and pop fans

is professor of Italian and Mediterranean Studies and chair of the Department of Middle East Studies at the University of Michigan. She is the author of The Kingdom of Sicily, 1100-1250: A Literary History (2005), European Modernity and the Arab Mediterranean (2010), and Lives of the Great Languages: Arabic and Latin in the Medieval Mediterranean (2021).

Latin, classical Arabic and Sanskrit were no one’s mother tongue. They are cosmopolitan tongues, mega-languages that evolved to facilitate communication between local dialects, then expanded to become world languages (according to their own historical understanding of what at different times the world encompassed). To master one of these languages, the would-be writer must memorise paradigms and declensions, vocabulary lists and sequences of tenses. This formal language is learned in the schoolroom, an education that marks a passage from childhood to maturity. The cosmopolitan languages of the past might command respect. But it’s hard to imagine loving them as one loves the sound of the language in which one first came to consciousness, the language that we associate with the music of a mother’s voice.

The rise of the European national languages spelled the end for the cosmopolitan language regime in western Europe. It allowed the author and the bureaucrat to do without Latin. From lullabies to epics, from schoolyard taunts to treaties, from cradle to grave, the vernaculars could handle it all. The vernacular revolution in western Europe started far from the Roman heartland, where Latin did not have deep roots – in Ireland and Iceland – and worked its way gradually toward the Mediterranean. In one region after the other, scriveners wrote registers, notary contracts, poems and, finally, laws and scientific treatises in local languages. From beginning to end, the process took more than a millennium. Portions of the oldest grammar of a European vernacular – Irish – date to the 7th century. Yet Galileo and Kepler still wrote scientific works in Latin into the 17th century and German universities used Latin as language of instruction into the 19th century. But, from the moment in 1295 when Dante explained that poets preferred the vernacular because the ladies they courted knew no Latin, the writing was on the wall.

By the 16th century, as writers outside the universities and the Church embraced the vernacular, Italians had pronounced Latin a dead language. This was, it seems, the origin of our habit of attributing life and death to languages. But the lives of its courtiers demonstrate its appeal before its untimely death. During the 14th century, after Dante kickstarted the vernacular revolution, Petrarch turned back the clock for Italians, and his partisanship for Latin inspired the 15th-century humanist preference for the cosmopolitan language. In 1361, on a diplomatic mission to Paris, Petrarch defended his attachment to Latin. King John II of France requested that he address the court in French – and Petrarch, with shocking temerity, refused. In the version of his speech that survives, he tells the king, dauphin and court of France that he prefers to speak in their common tongue. Latin was the language shared by King John, recently released from captivity in England, the French court and the Italian diplomat, who spent his formative years at Avignon, then home to the papacy. Five and a half centuries earlier, the emperor Charlemagne had called in a ringer from Britain – Alcuin (c740-804) – to train his court in the niceties of Latin usage and style. The English, in turn, got their Latin from Theodore of Tarsus, a Greek who fled the Persian invasions until he fetched up in Britain, and an emissary of Pope Vitalian (580-672): intellectual carpetbaggers, like Petrarch. Latin granted mobility and access to the most important conversations happening at that moment.

It is the backstage pass of languages, the tongue of intellectual connectivity and ambition. It’s not the language writers are born into, but the language they choose

The early Arabic tradition, too, was fuelled by those who answered its siren call. Many of the early Arabic litterateurs were not ethnic Arabs but converts to the language: Ibn al-Muqaffa‘ (724-769), who translated important works from the Persian, for instance, or the Syriac Christians who contributed to the translation movement that brought foundational scientific treatises into Arabic between the 8th and 10th centuries. Like many cosmopolitan languages, Arabic acquired technical vocabulary and honed its skills as analytical instrument in translation.

Sibawayhi (c760-c796), the first grammarian of Arabic, was Persian. The stories told about his life illustrate how the language that the courtier pursues like a lover might reject the suitor’s advances. It’s said that Sibawayhi started as a student of law. In a lesson, he made a grammatical error, and the schoolmaster shamed him. He abandoned the law and vowed to devote his life to mastering the language. At this early point in its history, no one had yet attempted to analyse and record the grammar of Arabic. Sibawayhi’s studies produced thousands of pages of notes and the first grammar of Arabic, a monumental work that Arabic grammarians still study and admire. Then another grammatical error at a gathering of his peers led to a second shunning. Sibawayhi fled Basra, his home, and it’s not known where he spent his last years. He passed his papers on to al-Akhfash, a man in his circle, who ensured the survival of his teacher’s work.

The anecdote of Sibawayhi’s twinned disgraces is probably apocryphal – there are no contemporary historical records to corroborate it – yet it resonates with anyone who has studied a foreign language. Grammatical error, humiliation and trolls who guard the language from outsiders are a constant. What draws us to the language, despite these setbacks and slapdowns? These stories from the lives of Petrarch and Sibawayhi – myths though they may be – answer that question. The courtier uses the cosmopolitan language to escape anonymity and obliquity. It is the backstage pass of languages, the tongue of intellectual connectivity and ambition. It’s not the language writers are born into, but the language they choose: not the mother tongue but the mistress tongue, as more than one writer has called it.

Despite the European national language revolution, the globe today is littered with cosmopolitan languages. The obvious example is the language in which you are reading this: global English, today the most-spoken tongue in the world. Many speak English as a mother tongue, of course. But 73 per cent of English speakers today are non-native speakers. To appreciate the appeal of the language as a magnet for the ambitious, compare it with the second most-spoken language today: only 18 per cent of speakers of Chinese are non-native.

‘This song proves [the theory]. You will dance to it and you will learn it even if you don’t know how to speak the language’

To whom does English belong: the quarter of its speakers who acquired it as a mother tongue, or those who learned it out of desire for the access it grants? It’s easy to dismiss English as a language of convenience, not a language that inspires affection. Yet historically, it is not just its imperial reach but also its cultural cachet that explains the dominance of the language. Think of the teenagers around the world who first heard English at the movies or in popular music and learned to mimic the sound of the words, only later learning what they meant.

There’s no better illustration of this phenomenon than the Despacito tsunami of 2017. Spanish is the oldest European language in the Americas, the fourth most commonly spoken language in the world, and spoken almost everywhere in the United States. It is far and away the most popular foreign language at US universities, more than four times more popular than French, its nearest competitor. But only 13 per cent of Spanish speakers worldwide are non-native. Despacito, sung by the Puerto Rican crooner Luis Fonsi and the reggaeton OG Daddy Yankee, leapt the language barrier to become a global megahit. Driven by the dembow beat (the rhythmic lingua franca of reggaeton), a chord progression (vi-IV-I-V) that is in countless 21st-century hit songs, and a come-hither intro played on the cuatro (the national instrument of Puerto Rico), Despacito was for years the most-viewed music video on YouTube. Reflecting on its astonishing popularity, its producer Mauricio Rengifo said: ‘Everybody’s got that theory that the language doesn’t matter, but it’s hard to prove it, and this song proves it. You will dance to it and you will learn it even if you don’t know how to speak the language.’

A cosmopolitan language may start as the language of empire. Bureaucracy and business impose it on mid-level managers who care nothing for the culture it represents. But Despacito illustrates a truth about the cosmopolitan language that we do well to remember. Unlike the mother tongue, it is a language that we desire before we know it. ‘Earlier scholars only worked with the noble language,’ wrote the 19th-century Arabic litterateur Ahmad Faris al-Shidyaq of his inamorata, ‘but I have loved it: my affection for it is so true that I prick up my ears to its parchments; I have lit my wicks with it, and I spend my nights in it.’ We want the cosmopolitan language because it grants access, mobility, intellectual liaisons. The mistress tongue, even more than the mother tongue, is the music of the language we love.