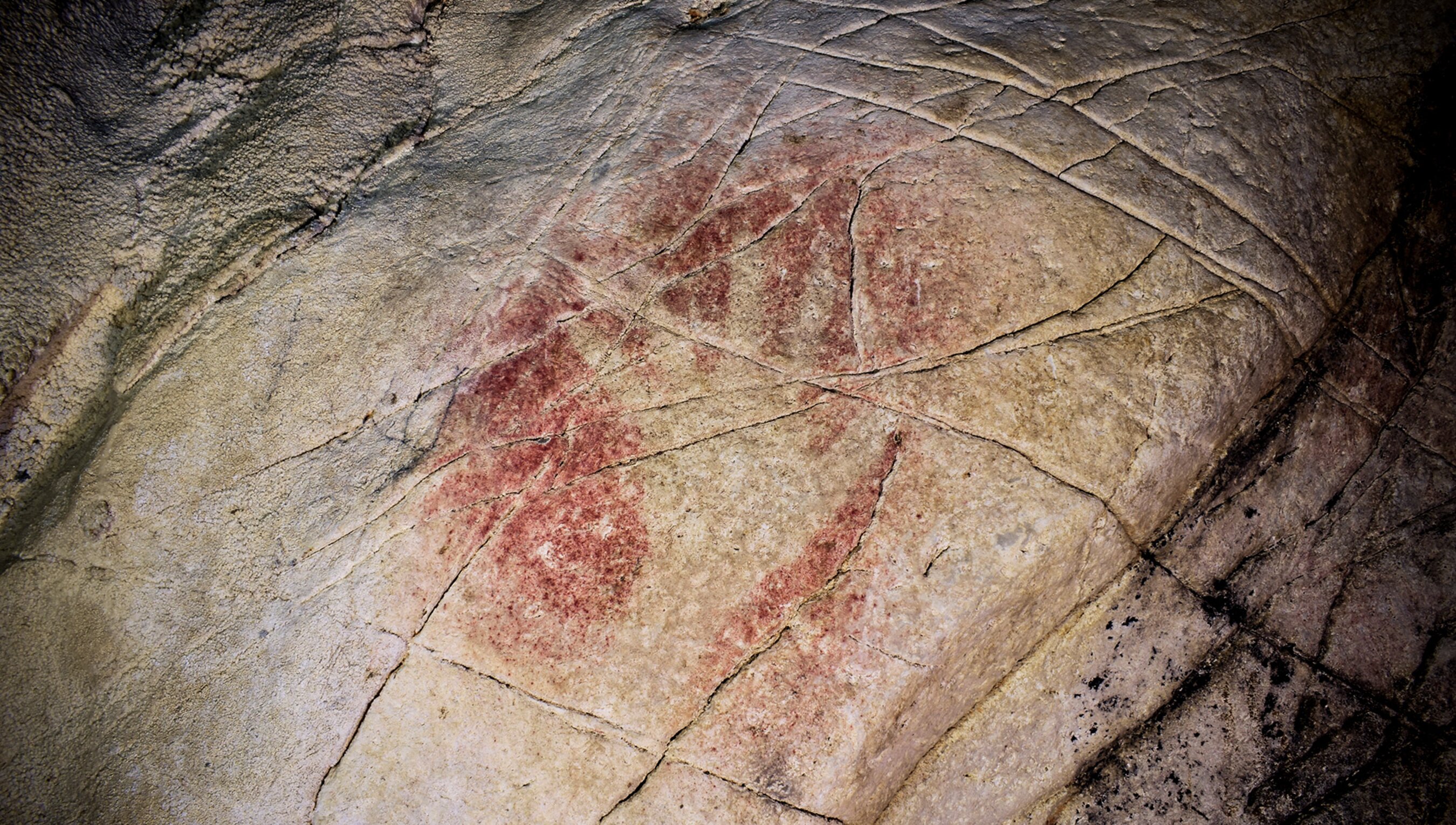 recently completed her PhD in the Department of Archaeology at Durham University in the UK, where she researched the psychological foundations of Upper Palaeolithic cave art.

Deep underground, the silence of a cave is broken by the squealing laughter of children. Their hands are bright red, covered in paint, which becomes smeared on clothing, skin, and rock surfaces as they play. One young child from this group is ushered away by an adult, and she reluctantly follows the adult towards one of the walls of the cave, marked by the vivid red negative hand-stencils. The adult holds the infant’s hand carefully against the cave wall as she fidgets, eager to get back to playing. The adult sprays a mouthful of red ochre paint over her small hand, leaving another impression of a hand on the limestone surface. It is a deep tradition within their Ice Age society, and one that this young child will remember and return to in years to come.

Messy, tactile interactions are an integral aspect of our childhoods. Under the gentle guidance of the community around us, we stumble about in those early, formative years – clumsily grasping at objects, creatively making messy accumulations of the things we find, and playfully engaging with the world. As we literally feel our way around, we learn both about ourselves and our place within the society around us. Yet even though understanding these childhood years is vital for appreciating how people develop and learn particular cultural values and ideas about being in the world, there is rarely any discussion of children in Ice Age societies. The behaviours and activities of children are often assumed to be too difficult to distinguish or altogether absent in the archaeological record. Ice Age children are usually discussed only in the context of heart-wrenching burials, where they were carefully laid to rest, sometimes dressed in elaborate beaded costumes with small animal figurines or valuable objects placed beside them. Children are cast as static in these discussions, defined only by how they were treated in the exceptional examples of their untimely deaths, and ultimately perceived as being of secondary importance for understanding our most ancient Ice Age ancestors.

But these unusually intricate funerary practices suggest children – and, by extension, their childhood – must have been valued by Ice Age societies. If we want a fuller appreciation of Ice Age people, we must also understand their children: how did they play, learn and stumble through the world? And what might this suggest, in turn, about the values held by our distant ancestors? Answering these questions has the potential to infuse colour back into the lives of Ice Age children, and allow a much deeper understanding of what life was like for these ancient people.

A closer look at some of the examples of messy and tactile activities from the Ice Age, perhaps unsurprisingly, reveals the presence of children. Once assumed to be the enigmatic marks made by trance-induced shamans practising some otherworldly hunting magic, archaeological research is increasingly showing that making cave art was a social, group-wide behaviour – and children were active participants. A recent study by a team of researchers in Spain found that hand-stencils made deep within caves represent all members of society. Children, and even infants younger than three years old, participated in making these hand-stencils alongside adolescent, adult and elderly individuals. The youngest undoubtedly would have had to be held still by an adult as ochre was sprayed over their hand to produce the stencils, giving an intimate glance into the making of this art. As discussed by the authors of this study, the social nature of this behaviour suggests that the making of art was not limited to a privileged few, but was an activity that involved everyone, enhancing group cohesion in the process. Their findings contribute to growing evidence that children engaged in much the same artistic behaviours as adults; hand-stencils from caves elsewhere in Europe, such as Gargas in France, similarly are images of the hands of young infants and children.

We can only speculate about why these hand-stencils were made or what they symbolised to Ice Age people, but it is clear that they were part of a deeply rooted cultural tradition within these societies. Making hand-stencils seems to have been a practice that was repeated by different cultural groups throughout the Ice Age world, from the caves of Pech Merle and Gargas in modern-day France to Leang Timpuseng cave in Sulawesi. The oldest examples of hand-stencils appear to have been made by Neanderthals in Spanish caves more than 60,000 years ago, and the practice was picked up by our Homo sapiens ancestors who continued it throughout the Upper Palaeolithic, richly decorating cave and rock-shelter walls with tens and sometimes hundreds of hands. Even within the same cave, hand-stencils may be separated by several thousand years, implying that people returned to the same place and added their hands to the assemblage of their ancestors’ hands. This behaviour was likely a visceral experience for Ice Age people; an ancient form of handshake between hands reaching through time, and a more-or-less permanent record of having been there. It is easy to imagine individuals returning to find their own hand marks on the wall, and perhaps even placing their hands again onto the painted surface.

The tactile and sensory nature of making these motifs – hands gripping the rough limestone wall in the lamp-lit darkness, then sprayed by a wet ochre paint – has also led many to suggest this was a way Ice Age people gave themselves a sense of permanence and embodied presence within these dark, unfamiliar cave environments. Leaving behind the impression of a hand installs oneself as a feature of the cave, entwining people with caves that they may revisit in subsequent years.

Children were present within the sacred spaces of caves, performing their own playful rites in the dark

How much more meaningful is it, then, that children actively participated in this important cultural practice? Not only did adults install themselves within these environments, engaging with the hands left by their ancestors in the process, but they encouraged their children to do so too. Perhaps this was one way in which to teach children that particular caves were important places to return to, a sacred space where their ancestors were visually represented by traces of faded hand-images on the walls. The active engagement of children in this practice may also have served to ingrain their values and behaviours within the next generation, ensuring cultural longevity in the process. The meaning behind making these marks is long lost in deep time, and hand-stencils undoubtedly carried implicit messages about how these Ice Age people understood their place in the world, which would have been important to instil at a young age. But for us today, and perhaps more importantly, these ancient hands exemplify how children were valued in Ice Age societies: they weren’t merely a burden, but instead children’s learning and play was central to many of the activities practised by these people.

Echoes of children’s playful behaviours can also be glimpsed in other forms of impressions they left in cave environments. Finger flutings – marks made by tracing fingers through the soft clay-like ‘moonmilk’ that coats cave walls – were often made by children, perhaps as young as five years old. There is a distinctly childlike feel to these ribbon-like marks preserved in the cave wall; one can picture children running alongside the wall, fingers firmly pressing into the pliable, muddy surface. These fluted marks also sometimes overlap with, or even take the form of, representations of animals; children’s fingers can be seen running across the heads of deer and bovids.

Children’s footprints are also often present in the same caves used for detailed representations of animals, and occasionally alongside these finger flutings. The footprints are sometimes chaotic, with small feet overlapping one another and no clear direction from one area of the cave to another. Some have suggested this represents children dancing, painting a vivid image of children playing under the dim glow of firelight. Small crawl spaces within caves, too, were perhaps only accessible to children. The small, clumsy drawings within these spaces likely reflect children practising their own art, perhaps mimicking adults as they coax animals from the rock surface through the application of pigment. It is clear that children were present within the sacred spaces of caves, making their own forms of art and, in a sense, performing their own playful rites in the dark.

Refocusing narratives about Ice Age societies to bring children to the fore infuses their lives with intimately familiar and tender moments, from gleeful play to a deep-rooted curiosity about the world around them. Ice Age children, much like our own children, joyfully engaged with the world in messy and creative ways – and, it seems, were actively encouraged to do so by their parents. These hand-stencils create an intimate connection with these children. Their small hands, which last touched the rock surface of cave walls tens of thousands of years ago, reach out to us from that distant and largely unknowable past. It is as if they are enticing us to connect with them and reach back in response: a tender handshake across time.