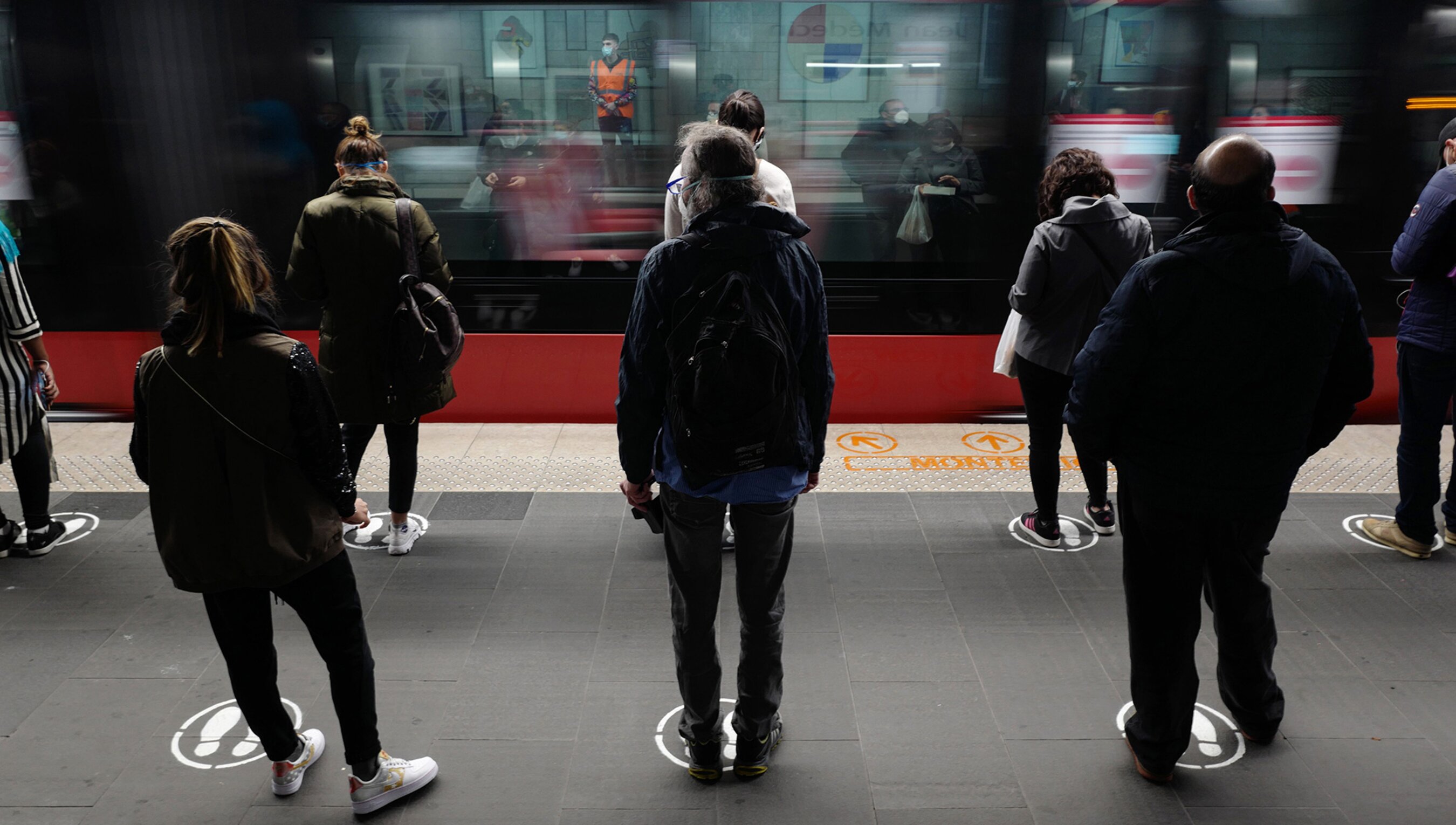 The behavioural immune system protects us, but at what cost?

is professor of psychology at Royal Holloway University of London. His research investigates the neural and cognitive mechanisms of self-awareness and social cognition. He is the co-editor with Helena De Preester of The Interoceptive Mind: From Homeostasis to Awareness (2018).

None of our senses has suffered from the COVID-19 pandemic as much as touch. And although this touch deprivation has perhaps been most salient in relation to our separation from family and friends, many of us have also felt the loss of even mundane forms of touch – forms that might even be the foundation for social relations more broadly. We used to open the doors to our workplaces, touched by a hundred other hands every day, and hold them open for someone else without giving it a second thought. We used to shake hands with strangers before we got to know them. We used to pass everyday objects to each other through our hands. No more. Even as lockdowns begin to ease unevenly, we might still bump elbows, wave instead of hug, and obsessively disinfect our hands. Touch remains something of a taboo, something that brings us closer to the risk of serious disease or death.

As many of us literally lost touch with our friends and loved ones, and stopped touching strangers, we endured an unplanned social experiment on skin hunger and touch aversion. Sure, some of us were relieved not to have to shake hands with colleagues, acquaintances and strangers, and might never wish to do so again. For many people, though, this fear of contamination and experience of touch-aversion felt new, and is likely to continue beyond the pandemic. Could this experience of the world being out of reach, beyond our fingertips, have a corrosive effect on our social relations, even when the acute threat of COVID-19 has dissipated? There is, after all, a long history of prejudice associated with touch, its relation to disgust, all the way through to the politics of discrimination.

The philosopher Martha Nussbaum has argued that disgust is related to a human tendency to deny and reject our status as mortal, fleshly beings. In The Monarchy of Fear (2019), she notes that disgust ‘is motivated by anxiety about animality and mortality, and triggered, therefore, by bodily characteristics, real or imputed, that bear a close relationship to our anxieties about mortality and the vulnerable animal body.’ In practical terms, disgust is an aversion to contact, driven by a fear of contamination. Our hands and mouths are the gatekeepers, the charged body parts whose activities can keep us safe or imperil us. But beyond disgust for primary contaminants such as blood or rotten food, we’re also capable of a wider sense of disgust, shaped by social forces, that extends to groups, objects or situations that bear no reliable connection with real risk of infection.

Across history, dominant social groups have exploited this sense of disgust as a means of social control against ‘dangerous’ others. Social practices of segregation, discrimination and racism rely on tapping into this basic emotion. In the United States, African American bodies have been regarded with disgust in wider culture, portrayed as sources of contamination. In India, more than 160 million people known as ‘untouchables’ or Dalits are stigmatised as being innately impure, less than human beings. Despite the fact that untouchability was banned in India in 1950, discrimination and hate crimes against the country’s Dalits are still prevalent. In both the US and India, it’s telling that segregating a wide range of everyday, bodily activities and objects has been at the heart of such structural discrimination: drinking fountains and lunch counters, cutlery and glasses, appliances and beds. These are the same types of shared social practices that were banned beyond families or social bubbles for the best part of a year in many countries across the world because of the COVID-19 pandemic.

Historically, ruling social groups have used an imputed fear of contamination to project disgust in order to sustain oppressive measures against certain groups. It’s also the case that a real fear of contamination can result in more discriminatory social behaviours. There are biological but also psychological mechanisms that partly explain the emergence of such behaviours. Contact with any pathogens activates our immune system, which will try to mount a defence. But by the time we’re in touch with a germ, it might already be too late. As a consequence, humans have evolved what the psychologist Mark Schaller has called a ‘behavioural immune system’: a set of reactions triggered by our perceptions about the presence of infectious pathogens in the environment, rather than by direct contact. The behavioural immune system mobilises cognitive and emotional responses such as fear, anxiety and disgust to avoid pathogens. Given the risks associated with COVID-19, our behavioural immune system has justifiably been in overdrive – and, in the context of the pandemic, greater sensitivity to disgust might have had several functional benefits, such as encouraging hand-related hygiene.

The behavioural immune system can be exploited for different purposes – and, once it’s active, it can spill over into new domains beyond the one it’s meant to be protecting us against. For example, emphasising the risks of infection makes people adopt more conformist and conservative attitudes; when people were given cues to remind them of physical cleansing in a public setting, they professed more politically conservative opinions than individuals who were not given such reminders. Another study showed that priming people with disease-related information made them move in more socially avoidant ways. In addition, people who display greater levels of disgust in response to pathogen cues are more likely to endorse xenophobic attitudes, but also exposing people to information of high disease-salience made them express less positive attitudes toward foreign immigrants. And beyond the lab, large-scale population-level studies have shown that the presence of different diseases affects the extent to which people are ethnocentric or in favour of authoritarianism.

Such effects have already been documented during the COVID-19 pandemic. As expected, people with a higher pathogen disgust-sensitivity were more likely to engage in preventative health behaviours, such as social distancing, handwashing, cleaning and disinfecting. But at the same time, a US-based study showed that people who were especially worried about becoming infected also displayed greater xenophobia. Similar findings were reported in Poland in relation to attitudes towards gay people or women whose behaviour does not comply with traditional roles.

What if the threat of COVID-19 comes under control, but people refuse to go back to the carefree tactile habits of our pre-pandemic world?

How can we explain these findings? It seems that the threat of contagion, whether real or imagined, and discriminatory attitudes are mutually reinforcing. These dynamics meet at the middle-layer of the body. This implies that the way we touch and physically relate to one another is both a cause of, and emerges from, the social and political context in which it happens. That sociobiological relationship between touch and disgust also helps us grasp the history of why dominant social groups have so often deployed a fear of contamination to marginalise and oppress people.

Historically, ruling social groups have used an imputed fear of contamination to project disgust in order to sustain oppressive measures against certain groups. Over time, we find the fear of the same basic types of human interactions: the simple yet fundamental actions of touching each other, touching the same objects as others, and breathing the same air. These are the sort of everyday human activities that the COVID-19 pandemic so abruptly removed from our lives. For many lonely people across the world, whether they live in big cities or not, such mundane forms of everyday touch are often the only kinds they are afforded. And while it might make sense to socially distance and avoid contact during a pandemic, such habits might have unintended side-effects if they persist after the real risk to health has been eliminated.

The embodied ways we relate to one another and the world structure how we think about each other and the world, as George Lakoff and Mark Johnson have argued in their seminal book Metaphors We Live By (2nd ed, 2003). So here’s one more challenge we might face in our post-pandemic world: what if the threat of COVID-19 infection comes under control, but a significant number of people refuse to go back to the carefree tactile habits of our pre-pandemic world? Many report a re-entry anxiety, ‘a fear of resuming pre-pandemic ways of life, having associated people with danger’. Covid anxiety syndrome, characterised by compulsive hygiene habits and fear of public places, is now being discussed in the psychiatric literature. In less severe cases, many of us don’t look forward to shaking hands again or breathing the same air as others in crowded trains or buses. According to a survey conducted in February 2021, one in four Britons stated that they did not look forward to greeting people with a handshake, a hug or a kiss. In a different survey conducted in July 2021, 40 per cent strongly reported avoiding touching things in public spaces because of a fear of the virus, even though the current scientific consensus suggests that airborne droplets are more likely to spread the COVID-19 virus than touch.

In a world where we are less willing to touch others, will we slowly become more xenophobic, discriminatory and bigoted, despite our best intentions? Touching and being touched is a biological drive we share with many other animals. It’s also the most basic way of connecting to and feeling each other’s joys and sorrows, fears and desires. By simply not touching each other, we also lose touch with one other. Being aware of the subtle ways in which touch aversion, disgust and discrimination feed off each other should make us redouble our efforts to reach out, touch others, and let ourselves be touched in return.