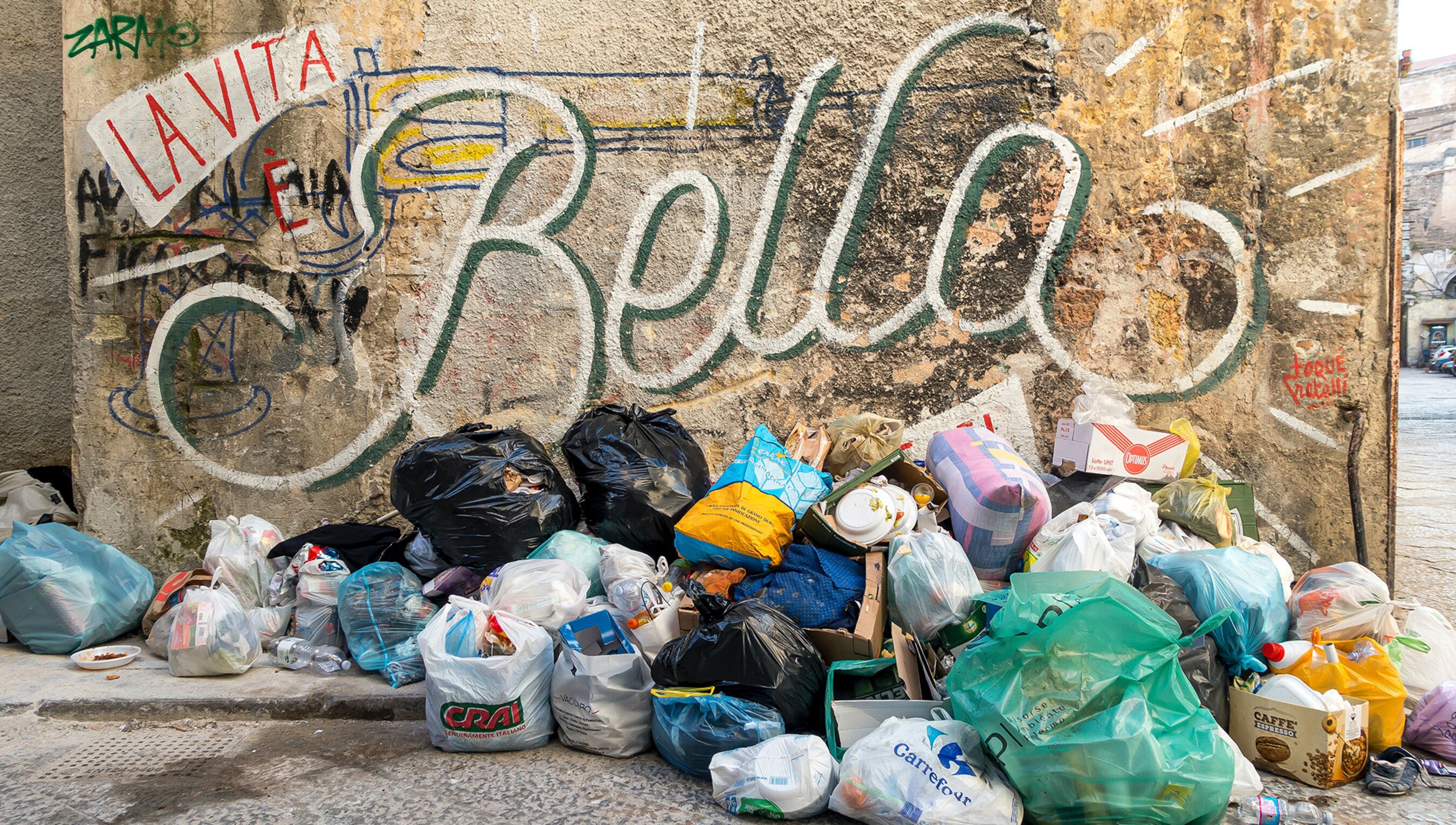 You can train yourself to find disgusting things less gross

is a postdoctoral fellow in the department of psychology at Concordia University in Montreal and a clinical psychologist. He lives in Sydney.

Imagine it’s a hot and humid day. You’re cleaning up after dinner, and you see that the bin is full. You pull out the bag, noticing a bad smell, and take it outside at arm’s length. As you flip open the lid of the outside bin, you’re hit with an overwhelming stench. You throw the bag in as quickly as possible, close the lid, and breathe a sigh of relief only after going inside and thoroughly cleaning your hands.

If you felt a bit uncomfortable imagining that, you were likely experiencing the emotion of disgust: a feeling of revulsion towards something unpleasant. Most people have felt disgust at some point in their lives – when faced with rotting food, or a bloody injury, or someone with poor personal hygiene, for example – but some are much more prone to this emotion than others. Some might not have been bothered at all while reading the opening story; some might have felt slightly unsettled; and others might have felt so disgusted that they were reluctant to keep reading. If you fall into the final category, you might label yourself a squeamish person – a lay term for what psychologists call being disgust prone.

At the right level, disgust is useful. In fact, most psychologists define disgust based on its function, which is to protect the person from contact with unpleasant or dangerous objects, animals or people. When we feel disgust, it motivates us to avoid the unpleasant thing, either by moving away from it or not entering situations where it might be. Consider the scene from the Pixar film Inside Out (2015), in which various emotions are shown as characters inside the brain of a young girl, Riley. When Riley’s dad tries feeding her broccoli, the character Disgust says to the other emotions: ‘Okay, caution, there is a dangerous smell, people.’ She flicks a lever, which makes Riley flip the bowl of broccoli over her dad, and Disgust says: ‘Well, I just saved our lives. You’re welcome.’

The trouble is that disgust can go into overdrive, and lead to negative consequences. For example, heightened disgust sensitivity can lead you to judge other people more negatively. One study showed that mock jurors who were highly disgust-sensitive were more likely to attribute guilt and inherent evilness to suspects in fictional descriptions of crimes. They were also more likely than those low in disgust sensitivity to convict these suspects and recommend lengthier sentences. A number of studies have also reported a strong link between heterosexual individuals’ experience of disgust and their prejudice towards gay men. (In fact, due to the predominance of disgust, rather than fear, in this form of prejudice, some researchers use the term homonegativity rather than the misnomer homophobia.)

Being more prone to disgust can also influence the decisions you make for yourself, including your career choices. One study found that, for health professional trainees, those high in disgust sensitivity were more inclined to choose a career in pharmacy rather than medicine or nursing. Even among medical students, those with greater disgust proneness were less inclined to specialise in traditionally more disgusting areas, such as emergency medicine.

Heightened disgust sensitivity might also be an obstacle in relationships. In general, people are more likely to feel disgust towards strangers than those they know well and, if this becomes extreme, it can affect their ability to develop new relationships. This is especially true when it comes to sex. In one study, participants viewed a set of 20 images chosen to elicit sexual disgust, including pictures of nude elderly individuals and genitalia visibly affected by sexually transmitted diseases. Compared with participants in control groups, who viewed either other disgusting images (such as rotting food) or threatening images (such as someone pointing a gun), those in the sexual-disgust group were especially likely to report a drop in sexual desire after the experiment. In another study, male participants watched pornography while smelling either a neutral odour or a disgusting odour (apparently a mixture of scents similar to skunk odour, rotten garlic and ‘smelly feet’). Participants in the disgust condition showed a significant decrease in sexual arousal.

That might all sound quite obscure – amusing, even – but disgust sensitivity can have a significant negative impact on people’s lives. At the extreme end, elevated levels of disgust and disgust sensitivity can contribute to and maintain debilitating psychological disorders, particularly contamination-related obsessive-compulsive disorder (OCD). Many individuals with OCD report obsessions (intrusive thoughts, images or urges) related to contamination, as well as compulsions (repetitive attempts to rid themselves of the contamination) and intense negative emotions when thinking about contamination. For example, an individual with contamination-related OCD might be constantly concerned about contracting germs and might wash their hands for hours each day to rid themselves of this obsession and the associated fear and disgust. Unfortunately, the hand-washing is only temporarily successful (if that), and the intrusive thoughts and negative emotions soon return, triggering another episode of compulsive behaviour.

The question is whether anything can be done to relieve intense feelings of disgust, whether or not you have OCD. Along with other clinical psychologists studying contamination-related OCD, I’m particularly interested in whether people can learn to respond differently to things that they find intensely disgusting, to lessen the control that this emotion has over them. To do this, it’s important to think about people’s thoughts – because, according to cognitive behavioural theory, the emotions a person feels are determined by how they interpret or appraise a situation, rather than the situation per se.

When it comes to disgust, people tend to have two types of thoughts. The first is what might happen as a result of the disgusting thing and the likelihood of this actually happening, say, ‘I’m definitely going to catch an infection’ or ‘I’m certain I’m going to be sick’. This is known as the primary appraisal. The secondary appraisal is about whether they can cope with feeling disgusting, for instance, ‘This feeling is going to overwhelm me’ or ‘This feeling will never go away’. Along with my colleagues, I wanted to explore which kind of thoughts might underlie extreme avoidance of disgusting situations and, importantly, whether it was possible to change these thoughts.

If you’re someone who is particularly squeamish or disgust prone, you’re not a slave to this emotion

We investigated this by recruiting a group of participants who had high levels of concern about contamination – this was measured with a questionnaire about OCD symptoms, with questions such as ‘I sometimes have to wash or clean myself simply because I feel contaminated.’ We wanted to see whether we could train the participants to tackle two tasks that they might otherwise find disgusting: approaching and touching a dead cockroach, and drinking apple juice out of an unused urine sample container.

The participants were divided into three groups. The first group read some text that aimed to change their primary disgust appraisals – in other words, to convince them that the feared outcome likely wouldn’t happen, or might not be as bad as they thought. For example, this text emphasised how unlikely it was to catch germs off cockroaches: ‘There has actually been a study conducted where a cockroach and a human finger touched the same dirty kitchen floor … the human finger produced several times the amount of bacteria the cockroach did.’ The second group read text that aimed to change their secondary disgust appraisals – about their perceived ability to cope. This text encouraged them to consider disgust as a normal, harmless and temporary emotion, and suggested that thoughts such as ‘I can deal with disgusting things’ might help to reduce distress and feelings of disgust. The third group acted as a control group and didn’t read any text about changing appraisals.

Compared with the other two groups, participants who read the ‘coping’ text were more likely to then drink apple juice from an unused urine sample container and reported feeling less disgust when doing so. Both texts also appeared somewhat effective in encouraging participants to move closer to, and in some cases touch, a dead cockroach. In short, our study suggests that it’s possible to modify how people think about disgust, which in turn can affect how much disgust they feel and how they behave around ‘disgusting’ things. None of our participants were diagnosed with OCD, so the next step is to test out these techniques with people who have contamination-related OCD. Although some cognitive-behavioural therapists already do this as part of their treatment, our results could support the routine inclusion of these techniques – particularly those aimed at changing secondary appraisals.

If you’re someone who is particularly squeamish or disgust prone, you’re not a slave to this emotion. The next time you encounter something that disgusts you, remind yourself that your feared outcome likely won’t happen, that disgust is a normal emotion that eventually passes, and that you have the ability to cope. Next time you take the bins out, you might find the task a little less unpleasant.