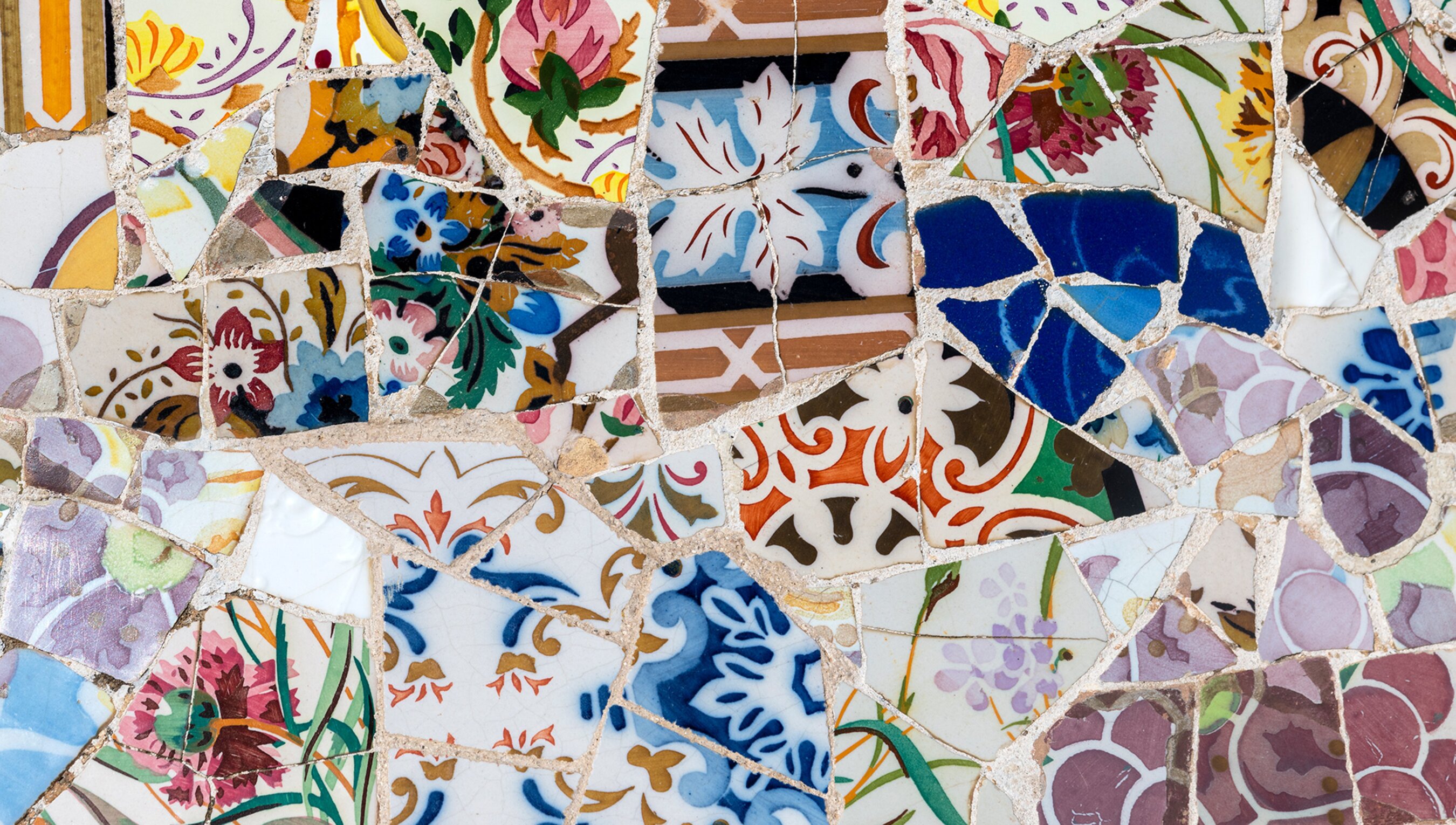 You’re not a computer, you’re a tiny stone in a beautiful mosaic

is a writer, coach and professor of cultural history at the University of Kent in the UK. She is also a member of the research collective Perspectiva and a fellow at the Hamburg Institute of Advanced Studies. Her books include Modernism and Perversion (2012) and Exhaustion: A History (2016), and she has just completed a history of the ancient art of self-improvement, which will be published by Yale University Press later this year.

Metaphors matter. Far from being mere ornamental flourishes that render our speech more vivid, they create important conceptual bridges between fields. They spark our imagination and activate our meaning-making faculties, allowing us to see things from a new perspective. Perhaps most importantly, the metaphors we live by shape our experience.

This is particularly true of the metaphors we conjure to describe our inner lives. The imagery we use is never neutral – it reflects deeper cultural assumptions, often about agency and personal responsibility. This has consequences.

With mind-metaphors, one way that this manifests is through influencing the therapeutics we seek out to cure our complaints. Imagine you struggle with a critical inner voice – one that constantly berates you for your shortcomings and makes you feel bad. You might call this voice a hostile superego in overdrive; your inner saboteur; you might see it as automatic negative thoughts; as the corrupting whispers of an ill-meaning demon; or simply unhelpful mind chatter. All of these labels rest on vastly different psychological models and notions of the self. The metaphor you use will not only shape how you experience your inner critical voice, but also determine your counterstrategies. You might decide to consult a psychoanalyst and embark on a lengthy quest to search for the voice’s origins. Or you might decide to work on your self-compassion to render your self-talk kinder, or to seek cognitive behavioural therapy (CBT) and learn to reason with your mind’s irrational output. You might choose to hire an exorcist, or to practise mindfulness meditation to understand how to let the mind’s chatter pass without taking its content too seriously.

Unfortunately, when metaphors capture the cultural imagination, it’s often not because they’re apposite or helpful, but because they hook into something that’s deeply familiar, such as a dominant technology of the day. For example, the water technologies of antiquity, such as pumps and fountains, stimulated the Greek and Roman notions of pneuma and the bodily humours. During the Renaissance, the human body was often thought of as a mechanical operation, much like clockwork. The Industrial Revolution saw the advent of steam and hydraulic energies, which inspired Sigmund Freud’s notion of precarious inner-psychological economies striving for homeostasis.

These metaphors reduce us to achievement-driven entities, as if our highest purpose is to be effective instruments

The dominant technology mind-metaphor of our age is the mind-as-computer. We’re warned of cognitive overload and advised to switch off more often to recharge our batteries. But we’re not machines. We’re biopsychosocial organisms, embedded, embodied and encultured, developing in constant feedback with our surroundings. If we become too entangled in computer mind-metaphors, our imagination will suffer. We’ll trust that we can be repaired by external techno-magical interventions, rather than accepting that all inner work takes patience, effort and time.

In recent decades, popular mind-metaphors have also drawn on the worlds of finance and business. Many self-help texts reference our social capital and emotional bank accounts. Self-improvement is often presented as a long-term sustainable investment in ourselves that will eventually pay off, yielding higher profits. For instance, in his bestseller The Seven Habits of Highly Effective People (3rd ed, 2020), the American businessman and motivational speaker Stephen Covey encourages us to optimise our inter- and intrapersonal effectiveness by using better self-management technologies. He sees the self as our ‘greatest asset’, and self-care as ‘the single most powerful investment we can ever make in life’.

However, these kinds of metaphors reduce us to achievement-driven and advantage-seeking entities, condemned constantly to self-optimise, as if our highest purpose is to be effective instruments. But effectiveness for effectiveness’s sake is an empty aim. Such imagery also casts us as competitors vying for scarce resources in a playing field in which the fittest survive – in this case the mentally fit, the emotionally agile, those who are the best self-managers.

This notion of self-optimisation contrasts starkly with the much older ideas of self-cultivation and Bildung: a life-long process of socio-psychological formation, learning and inner development. The ancient idea of self-cultivation, as explored by Confucius, Lao Tzu, the Buddha, Aristotle and the Stoics, for example, evokes a slower, incremental, less dramatic mode of developing our good qualities. It emphasises ethical and character development over skills enhancement. Using botanical imagery, it encourages us to nurture our virtues patiently, as we would nurture seedlings in a garden, so that we might grow and blossom. We must find the right climate and soil for us to flourish. Occasionally, we might have to prune wild growth, plant new seeds and pull out weeds.

Self-help metaphors reach particularly deep into our daily lives. They encourage us to feel the fear and do it anyway, to choose the roads less travelled, to win friends and influence people, to heal our inner child and be co-dependent no more. They reveal much about our underlying conceptions of selfhood. Other pervasive metaphors in modern self-help include the idea of life as a journey, a work of art, a battle, a jungle, a game, and a competition. Many self-help writers rely on images of social ascent, such as rising to the top, climbing a ladder or a mountain, or getting over the wall. As the American sociologist Micki McGee observed in Self-Help Inc (2005), we might consequently imagine ourselves as ‘combatants, contestants, or players; travellers or explorers; and entrepreneurs, salespersons, or managers’.

The choice of metaphors we use to talk about our inner lives reveals how we see ourselves and our purpose, whether we’re motivated by material, spiritual or experiential rewards. Most importantly, they disclose whether we think of ourselves as part of a wider social community with shared aims and obligations, or as lone fighters in a hostile environment, out there to secure a personal advantage.

Imagine our permanent, observing self as the blue sky, and all thoughts and emotions as weather

While the ancients saw the self primarily as relational, modern Western self-help writers often cast us as atomistic and competitive. However, there is good news. Different models are emerging in the recent genre of more sophisticated self-help, which once again emphasise virtue, meaning and character development. This is evident in popular psychology books written by academic psychologists in the past two decades, such as Grit (2011) by Angela Duckworth, Flourish (2011) by Martin Seligman and Transcend (2020) by Scott Barry Kaufman, as well as in popular philosophy books by academics, such as Aristotle’s Way (2018) by Edith Hall and How to Be a Stoic (2017) by Massimo Pigliucci, among others. A fast-growing tendency in our life-advice literature now emphasises the importance of locating our purpose outside the self, overcoming our fixation with chasing happiness and personal fulfilment. It seems that self-transcendence, as advocated by Viktor Frankl and Alfred Adler, is starting to top self-actualisation as our most desired goal.

Kaufman and others remind us that our ultimate aim is not a hero’s journey into the dark regions of our psyches where we might slay the monsters and return with deeper self-knowledge. Rather, as Seligman wrote in his earlier book Learned Optimism (3rd ed, 2006), the self ‘is a very poor site for meaning’; he urges us instead to seek purpose in the quality of our relationships and in contributing to community. After all, as the myth scholar Joseph Campbell similarly pointed out, the archetypal hero’s true aim should be ‘the wisdom and the power to serve others’.

This welcome shift from an internal to an external locus of meaning is also apparent in contemporary developments in psychotherapy. For instance, in his book The Happiness Trap (2007), Russ Harris, a prominent practitioner of acceptance and commitment therapy – or ACT, a form of psychotherapy that emerged recently from CBT with a greater focus on living according to your values and accepting difficult emotions rather than controlling them – suggests that we imagine our permanent, observing self as the blue sky, and all thoughts and emotions as weather – passing phenomena that, no matter how tempestuous and scary, are unable ever to harm the sky. We can also think of unhelpful thoughts as unruly passengers in the bus we’re driving – we can’t get rid of them, but we can choose not to follow their advice, just letting them bellow in the back while we focus on the road.

Perhaps we’ll see a broader cultural paradigm-change soon, inviting us once again to imagine the self as relational, interdependent and pro-social. This new kind of self could, as the US psychologist Robert Kegan suggested in The Evolving Self (1983), be understood as a work in progress, a process rather than a fixed entity, as dynamic rather than static. I believe that our new self-metaphors need to be based on a more sophisticated conception of the relationship between the self and the social, giving birth to notions of selves that are capable of striving for self-authorship, intimacy and contribution at the same time.

Nothing, then, is more urgent than minding our metaphors – especially our mind-metaphors. They not only shape the way we experience and seek to improve our inner lives, but they can perpetuate specific sociopolitical assumptions – for example, based on individualism rather than community. We should pay more careful attention to the imagery we use to talk about our inner lives, and be less tolerant of metaphors that cast the self as a broken machine, an entrepreneurial entity, or a lone fighter in enemy territory. I hope we can begin to create different kinds of metaphors that emphasise our connectedness – comparing us to bees, for example, to threads in a multilayered fabric; or to tiny, multicoloured mosaic stones, each unique and distinctive, but together forming a beautiful work of art.

The selfImaginationRituals and celebrations
3 March 2021