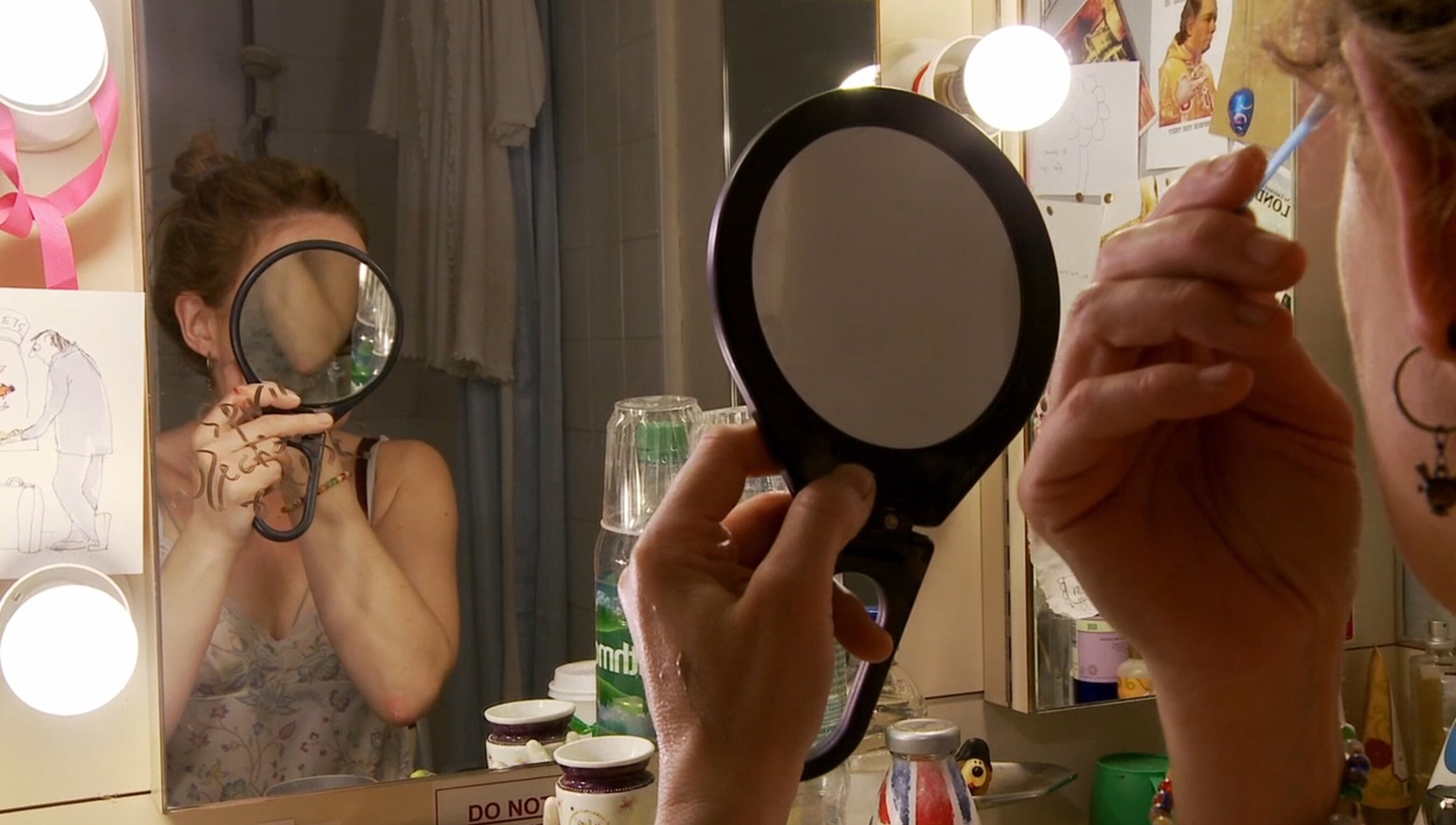 Theatre, acting and performance offer much to theorise about, including questions around language and speech, identity, ritual and aesthetics. In the Western tradition, much discourse has revolved around different ways of thinking about the highly disputed ideas of catharsis and mimesis in Aristotle’s Poetics, yielding a rich outpouring from philosophers and practitioners about what theatre is, how it works, and what its role in society is or should be. It can all get very weighty, so it’s good to be reminded now and then that theatre is also fun. Enter The Hour, a short documentary by the British filmmaker Pinny Grylls that takes us backstage at the National Theatre in London.

Following a number of actors in different productions for an hour before they go on stage, the film invites us into dressing rooms, corridors, rehearsal rooms and still-empty theatres for what develops into an entertaining pre-show performance. Grylls pulls off a neat bit of editing, cutting between the different thespians as if they’re all simultaneously preparing for their entrances and she’s managed to be with each of them at the same time. Though the plays took place at different times, this decision has a lovely rippling effect, allowing the film itself to do a number of things at once.

In moving from one actor to another, with the clock to curtain up ticking down, there’s palpable excitement building through the film. Grylls orchestrates each actor’s individual moments into a flow of anticipation that unifies the preparations of all, carrying us along right up to the point when we’re left in the wings as the actors go on stage. This results in a strong sense of the theatre’s community even if few of the actors we follow actually cross paths. The architecture of the National Theatre’s backstage area is a perfect set for this purpose, the dressing rooms stacked like dormitories surrounding an interior courtyard so that each room’s window looks out at the others. Curtains are usually drawn when necessary, but that doesn’t prevent from a lot of good-natured spying. And there’s a rousing first-night tradition that makes excellent use of this architectural quirk.

In counterpoint to the actors’ shared trajectory from stage door to stage is the delightfully varied rituals and routines that each undertakes beforehand – a cigarette out a window, a bit of piano playing, dramatic vocal warm-ups, breathing exercises, tongue-twisters, or getting into character through method acting techniques. Silliness and seriousness twist together, emphasising that professional acting both draws on the capacity to play and is arduous work. The physicality of theatre also comes through in numerous sequences in which actors fit themselves into costumes, apply makeup, have their hair coiffed, and rehearse bits of the shows. By including so many of these moments, Grylls subtly suggests just how frequently the actors go through these motions, underscoring that their labour is part of their art.

Questions of theory, practice and craft do find their way into the film, but mostly in snippets amid scenes in which actors prepare themselves for the immediate task at hand. Since Grylls doesn’t give these matters special weight, they become part of the overall arsenal of acting, more pleasingly personal heuristics than grand notions about theatre and performance.

All these choices mean that Grylls has crafted a refreshing, playful and humorous demystification of acting in one of the UK’s premier theatres. But there’s more: we do briefly see the actors in their dramatic roles at different moments in the film, teasing foreshadowings that heighten the experience of being with them backstage as they move towards their performances. Culminating with a return to the opening music while the actors make their stage entrances in quick succession, The Hour leaves us with the dramatis personae transformed – each actor in character, recognisable but distinctly different. In this way, the film presents as a sort of phase transition– like watching water go from liquid to vapour, its component parts the same, but its volume and qualities changed – a phenomenon as familiar as it is marvellous.