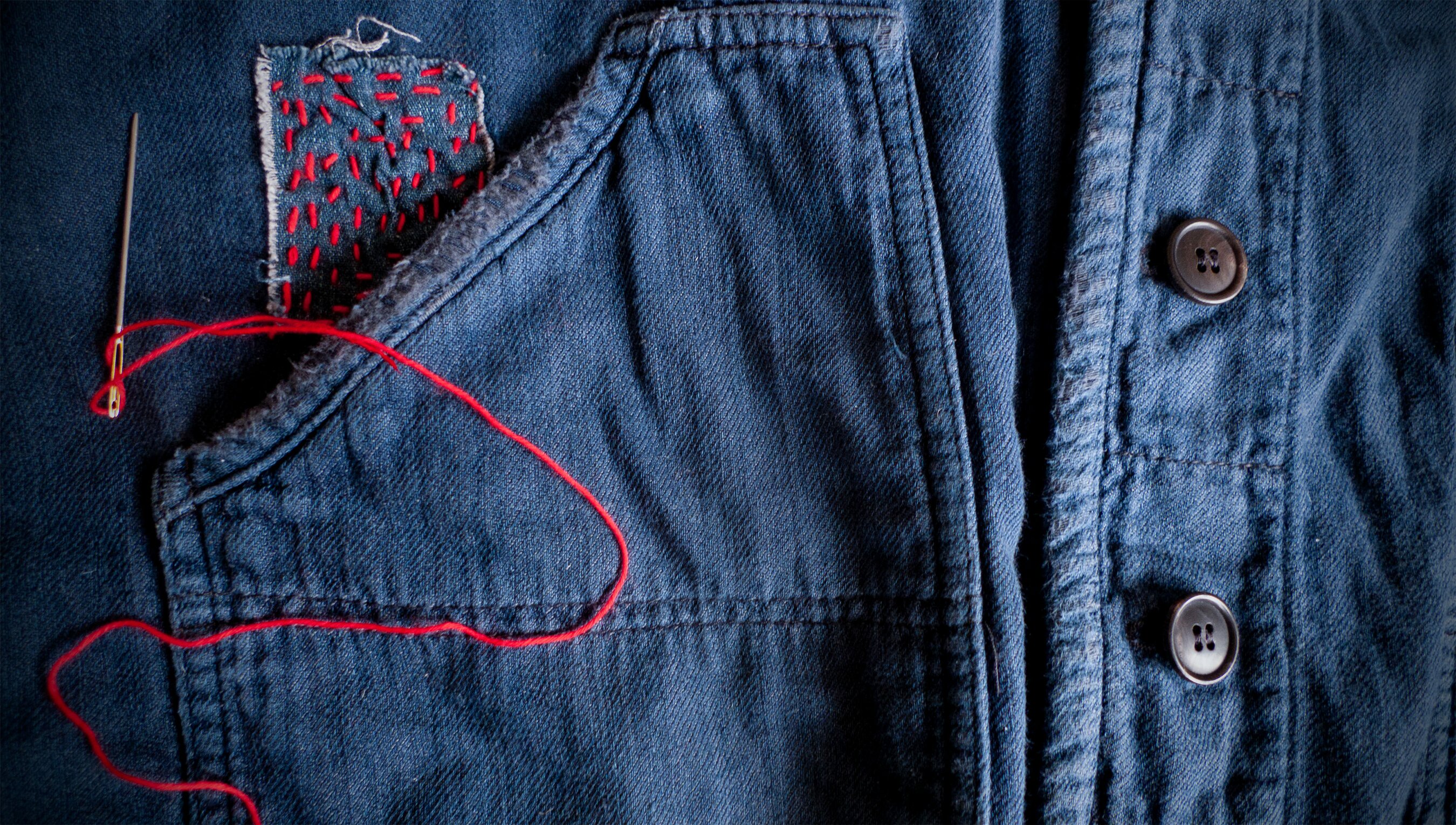 Could the art of ‘sashiko’ help to mend our frayed world?

In the third week of lockdown, for something better to do, I joined an online sashiko workshop. Sashiko, which means ‘little stabs’ in Japanese, is the traditional art of fabric repair. Originating in the 17th century, this patching technique was designed to extend the life of garments. More recently, sashiko has acquired a vogue in the West among the eco-conscious and the middleaged, mostly women, in search of small consolations to compensate for the depredations of age.

The workshop organiser asked us to bring along something to mend. In my household, ragged seam-rips strained by post-menopausal weight-gain predominate. Also linens. Lots of linens, including sheets and pillowcases inherited from my mother. Some old enough for me to have slept on them as a child, the labels – ‘St Michael’ in red; the ‘Jonelle’ logo in sans-serif script – redolent of a distant era. I dug out a treasured pillowcase with a rip at the seam.

In sashiko, the goal is not to hide the repair but to celebrate it, hence a patch is attached to the inside of the fabric using neat rows of tiny stitches, leaving the tear still visible. Sashiko exemplifies the Japanese principle of wabi-sabi, which has no direct English translation but expresses a sense of beauty in the incomplete and imperfect. It honours the strength to be found in the fineness and delicacy of the work: a patched and repaired garment is a source of reflection, even reverence. On Instagram, you’ll find examples of the skilful use of patches in contrasting colours and patterns that render a mass-produced garment unique and expressive, a product of individual experience and taste and with a delicate and coherent beauty all its own.

I cut my patch from an old fabric belt that had failed to accommodate to my expanding waistline. In sashiko, the tear is ‘cleaned’ by pulling away any stray threads but otherwise left as is. In the West, such a patch might be folded in to create a neatly seamed edge, but that’s not the aim in sashiko. In fact, the teacher suggested we pull a few loose threads to create a short but stable fray, rather like the edging on a rug.

Time has shape-shifted during lockdown. Hours have dragged, and there have been minutes that have shot by as if fired from a bow. But sashiko takes its own time, which feels neither too swift nor too slow. The Hungarian-American psychologist Mihály Csíkszentmihályi coined the term ‘flow’ to describe this feeling. Others might say ‘in the zone’. Flow is a rare and satisfying feeling. To encounter it now, with all that is happening to scramble the attention and separate us from a sense of groundedness, is a small miracle.

In this contented state, I measured out a length of ordinary cotton thread from hand to elbow. The teacher passed her thread through beeswax to help it glide along the fabric without knotting. I used the contents of an ancient tin of furniture polish I’d found at the back of a cupboard.

Half the globe is slowing down, and some of us are rethinking the speed at which we want to live

Sashiko is not for the slapdash or the impatient. Which probably explains why I’d never taken the time or trouble to try it out. It was always easier to throw whatever needed repairing to the back of the cupboard to await the day when there was nothing else to be done – a day that never dawned. Textiles too damaged for my inexpert mending skills were turned into cleaning rags. But now, any kind of rushing is impossible. Half the globe is slowing down, and some of us are rethinking the speed at which we want to live when this is over. Sashiko’s growing popularity in the West reflects a more general turning away from fastness; fast fashion, throwaway goods, junk textiles. It’s a small, quiet reordering of our relationship to consumerism, perhaps even to capitalism itself. A whispered reminder to pause in an otherwise rushing world.

Those of us in mid-age would do well to heed that whisper. Midlifers are no strangers to patching and repair. By our 40s and 50s, most of us live with patchwork careers and families. Our hearts are a quilt of ruptured and repaired relationships, our bodies sewn and cut and stitched and, if we’re lucky, put back together in some semblance of a whole. Like a sashiko repair, the scars, mental and physical, are written on us, and there seems little point in hiding them.

For my pillowcase, I found a beautiful tawny embroidery cotton. Following the teacher, I separated the individual threads at the cut end, then, gripping the skein just below the cut, pulled out a single thread. This too went through the furniture polish and was so transformed in the process it squealed, as if in delight, when I ran my fingers down it. Once more the thread sailed through the eye.

On the few occasions I do any kind of sewing (generally reattaching buttons), it is often with a stab of ill-feeling. It’s usually evening, the lighting is bad and I sew while watching TV, my mind not fully on either task. I’m conscious that the button wouldn’t need reattaching if it had been done properly in the first place, so I feel forced into the repair, resentful of it. Never before – possibly because I didn’t want to know – had I considered why the button might be badly attached, which is almost certainly that it was made by someone, possibly very young, earning almost nothing and paid by the piece, using cheap buttons and cheaper thread.

This time, though, it was late morning on a beautiful sunny day, the light streaming in through a window. No-one needed me to do anything except stay inside. The workshop was free and the teacher generous and knowledgeable. Nothing like resentment bubbled up. On the contrary, as I stitched, I felt some connection to the garment’s original maker, (most likely) a woman living far away, whom I’ll never meet but whose trials, now and pre-pandemic, are likely to be harder than my own.

A few weeks before lockdown, I’d embarked on another course, not sashiko this time, but the four-year process leading to accreditation as an integrative psychotherapist. This change in direction (I’ve spent most of my career as a writer) is part of a wider desire to find new ways of relating to the world, to other people and to myself. The course has now transferred online, which has made triads (a practical roleplaying exercise) and group work more difficult and less satisfying. But becoming a psychotherapist is an exercise in wabi-sabi, so this small inconvenience seems all of a piece with the principles of sashiko. Indeed, therapy is itself a process of repair that, like sashiko, is not designed to conceal breaks and tears – the places where life has worn us to a state of near collapse – but to support them with new and more robust frameworks for thinking and feeling. ‘Little stabs’, and occasionally bigger ones, are an inevitable part of the process by which therapy seeks to strengthen the fabric of our being.

As in therapy, in sashiko you work, initially, at an angle to the tear, crossing it at multiple points but without ever allowing the needle to dive directly into the dark matter of the hole itself. If you don’t catch every last loose thread, it doesn’t matter. It’s the patient accumulation and regularity of the stitches back and forth, back and forth, that ultimately provides stability and strength. If carefully done, a sashiko patch can last a lifetime.

While I was stitching, another workshop participant recommended In Praise of Shadows (1933) by the Japanese novelist Junichiro Tanizaki, for anyone who wanted to understand Japanese culture at a deeper level. I downloaded it and listened while walking the dog. Tanizaki’s book is a classic of Japanese aesthetics. It explores a wide variety of household objects from ceramic bowls to wooden toilets, examining the Japanese fondness for the quality and depth of shadow in interior design:

We Orientals tend to seek our satisfactions in whatever surroundings we happen to find ourselves, to content ourselves with things as they are; and so darkness causes us no discontent, we resign ourselves to it as inevitable. If light is scarce, then light is scarce; we will immerse ourselves in the darkness and there discover its own particular beauty. But the progressive Westerner is determined always to better his lot. From candle to oil lamp, oil lamp to gaslight, gaslight to electric light – his quest for a brighter light never ceases, he spares no pains to eradicate even the minutest shadow.

There is much darkness in the world right now. Yet as I came to realise, listening to Tanizaki’s essay, the Japanese taste for shade is less a simple accommodation than a deep appreciation of things as they are, which has its roots, I assume, in Buddhism, as well as a desire to know about the past and actively experience its echo in the present. Tanizaki reminds us that, until relatively recently, Japanese women blackened their teeth so as to bring out the subtle lustre of their faces. He speaks of the Japanese distaste for polishing brass and silver, preferring the tarnish and patina wrought by age and use. If an object, or a person, requires repairing, it is done with a respect that comes from understanding that they have served a long and useful purpose.

In the midst of the imposed quiet of lockdown, there might be time for some of us to consider how we might repair ourselves and our world, post-pandemic. Better minds than mine are turning to the challenge, exhorting us in print and on TV to re-enter our lives – when that becomes possible – in a more connected, less wasteful way. They point out that the air seems cleaner since we stopped flying, and that dolphins were spotted in Sardinian waters.

Much has been written about the opportunities we now have to make the revolutionary changes in our behaviour required to help restore and repair our world. Even to design whole new ways of being and producing and connecting with one another. It can feel thrilling to speculate on all the myriad formulae for a post-pandemic utopia. But in a recent interview on Britain’s Channel 4 News, the psychologist and professional optimist Steven Pinker sounded a more realistic note. He pointed out that, after world shocks, most people eventually revert to their habitual ways.

Maybe midlife has made me cynical, or softened my expectations, but I suspect that Pinker is right, and I don’t think that this is any reason to despair. It might be enough to hope that what emerges from the pandemic is a sashiko world: patched but stronger, a world where the frays and tears are visible and, far from compromising the fabric, add beauty, integrity and strength.