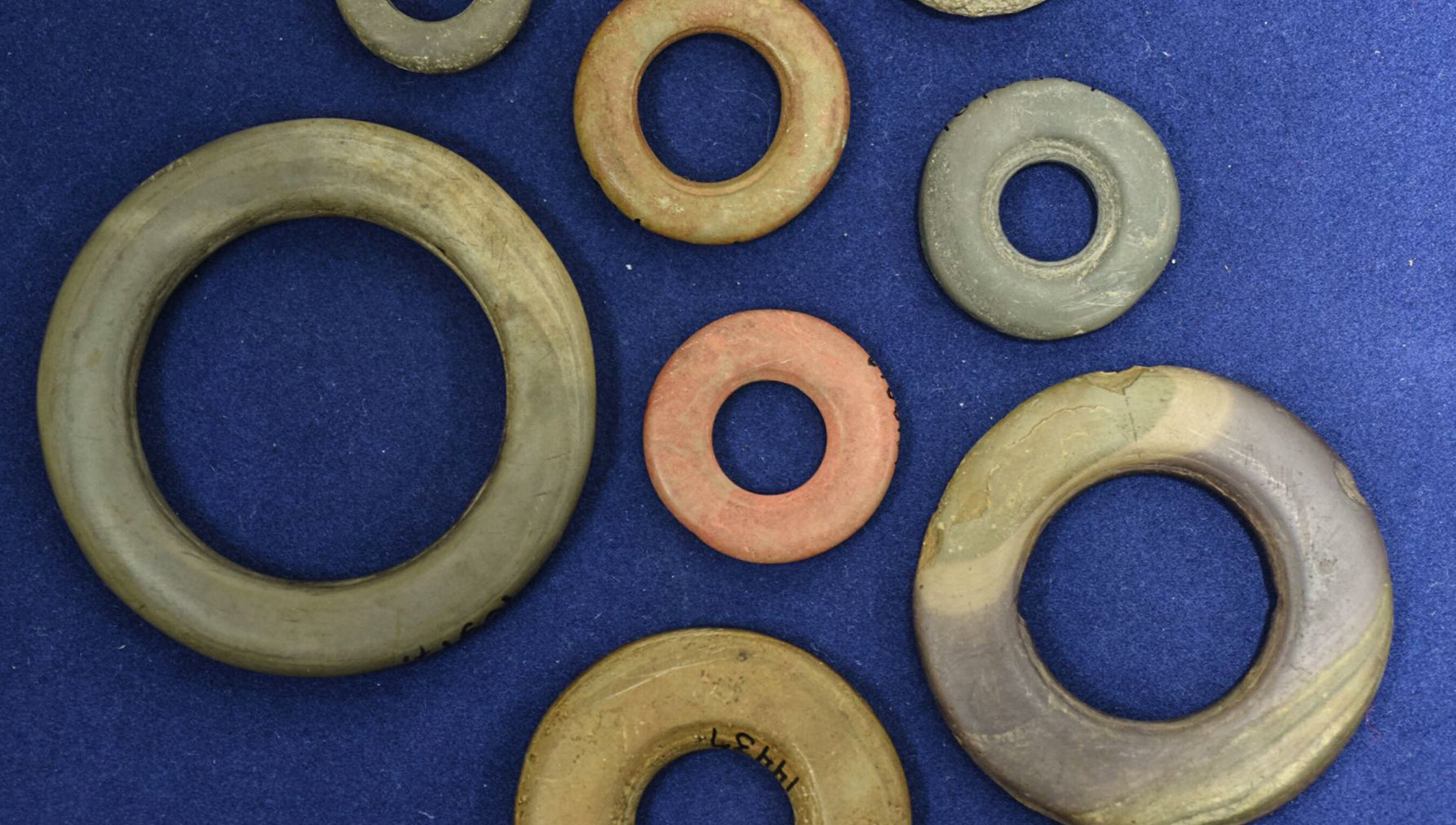 is an archaeologist and material scientist working at the Archaeology Laboratory at the University of Helsinki in Finland.

is a senior researcher in archaeology at the University of Helsinki in Finland.

Six thousand years ago, the people of a large, well-established village in what is now Finland gathered for a funeral. The deceased was wrapped in ochre-coloured animal hides, and decorated with dozens of amber pendants and buttons. As gifts, the villagers placed beside the body hunting equipment, stone tools, and a beautifully manufactured, light-grey, ring-shaped ornament. What was unusual about this ornament is that it was fractured into two parts that fit together. A third part, which would likely complete it, is missing.

Ornaments of this kind have not been studied extensively before. However, the few papers that deal with the matter note that the rings were mostly used during the earlier part of the 4th millennium BCE. Since many of the ornaments discovered in Finland are made of a distant raw material – greenish slate or metatuff originating from the western shores of Lake Onega in northwestern Russia – the ornaments may have formed part of an extensive artefact circulation system that existed between the Neolithic communities of the European boreal zone. Our recent investigation into the rings would hope to show that.

Even though referred to as ‘rings’, in reality many of these ring-shaped slate ornaments are only fragments. And as archaeology deals with a fragmented picture of the past, we have the tendency to see fragmentation of prehistoric artefacts as accidental. Accordingly, it has been suggested that the rings might have been repaired by drilling holes in them and tying the fragments together. However, as the archaeologist John Chapman has suggested in his influential book Fragmentation in Archaeology (2000), such fragmentation can also be intentional. Perhaps the rings we found were a symbol of how people formed and maintained social relationships: a token of friendship.

To explore our hypothesis, we set out to find fragments from one and the same artefact from two or more different contexts. To do this, we first collected all data concerning the ring-shaped ornaments in Finnish collections and investigated all available items more closely by measuring these ornaments for length, width, thickness and inner diameter. To explore whether fragments found in different locations could have derived from a single artefact, the artefact fragments were refitted. The refitting analysis, a classic archaeological puzzle, was conducted manually – and painstakingly.

It seems that the activity related to the ornaments took place where a large number of people gathered together, perhaps for feasting or other rituals

Since the refitting analysis was tentative at best, we supported the method by identifying the geochemical profiles of the artefacts with an X-ray fluorescence analysis. XRF analyses can be used to determine the element concentrations and raw materials of inorganic archaeological materials with a very high precision, and the technique can be applied as an entirely noninvasive surface analysis, which makes it perfectly suited to the study of archaeological objects. Because all the possible pairs we detected were likely made of slate or metatuff deriving from the Lake Onega region, we created a reference databank for our possible pairs from about 50 items that seemed to be made of Onega slate or metatuff. To verify the tentative identification of the raw material, we carried out statistical tests to compare the geochemical composition of the objects with the results of a recent geochemical analysis of Lake Onega-region metatuff. With this comparative data, we were able to explore whether these items were part of the extensive artefact circulation system.

Finally, we studied micro-details of the analysed objects’ surfaces under a stereomicroscope to detect possible use, wear and manufacture marks, and signs of intentional breakage, in particular. During the course of our research, it became evident that the ring-shaped ornaments indeed consisted mostly of fragments, not intact rings. For the most part, these fragments have been unearthed from settlement sites. That is a crucial finding. It means that we are not necessarily talking about a mortuary practice, but about something that happened in the realm of the living. It was also intriguing to note that some sites clearly yielded more ornaments than others. As these are large, central sites that also have contemporary burial grounds nearby, it seems that the activity related to the ornaments took place where a large number of people gathered together, perhaps for feasting or other rituals.

We discovered that the fastening-holes of several items showed scratches that probably resulted from wearing these items on a string or sewn onto clothes – not sitting undisturbed in a grave. In some cases, the fractured ends of the fragments also showed both cut and blow marks, fine polishing and even tool marks from cutting or hitting on the hole itself. In other words, we can be sure that these ornaments were fragmented on purpose. It seems that we hit the nail on the head: the ancient hunter-gatherers had broken these ornaments on purpose and most likely did it at some sort of social gatherings taking place at central sites.

Our results were supported further by two fragments discovered at two different sites, located roughly 100 kilometres apart. These fragments not only shared the same form (inner diameter, cross-section and thickness) but also had the same geochemical profile. The two pieces derive from one and the same artefact. But there’s something else going on here: one of the fragments had been worked on more finely than the other after the breakage of the artefact. What does this tell us? One possibility is that it is a plausible indication of differing skills between two individuals – one was able to spruce up their part and the other wasn’t. But perhaps it is also the simple human variety in taste: one preferred their fragment to be smooth, another rough. We were holding in our hands a materialisation of a social relationship given birth roughly 6,000 years ago – and a small indication of the different people who owned the different parts.

The XRF data also brought to light another pair of fragments. As these two items did not fit together by their inner diameter, we had overlooked them during the refitting analysis. However, as the geochemical fingerprinting of the fragments seemed very similar, we started to explore the items more carefully and realised that one of the fragments fits inside the other. As the natural striped surface of the stone raw material is present on both fragments, these fragments seem to represent items that were born during the manufacturing process of several rings.

Even more intriguing, one of the fragments had been discovered at a settlement site and the other at a nearby burial site. That likely means that these two fragments form a material link between the worlds of the living and the dead. Although we have no way of knowing the exact purpose of the separation of these fragments, the practice brings to mind contemporary mortuary practices in which cremation ashes are used to make, for example, tattoos, art and jewellery, and, as a consequence, to provide a way to commemorate – and even converse with – the dead. The ancient ring fragments were used as a similar medium of communication between the living and the dead.

Aside from detecting fragment pairs, the geochemical analyses also confirmed that most of the analysed objects were compositionally related to the geochemical signatures of the Lake Onega metatuffs. Some of the ornaments – or the stone material used in them – were indeed transported to Finland through an extensive exchange network covering a large part of eastern Fennoscandia. Interestingly, the chemical composition of the objects also showed a variation that correlates with their design. The variation indicates that the ornaments were produced at different times or locations and probably by a number of makers in the region of Lake Onega. As the items were exported, it is reasonable to assume that, at least in some cases, the ring fragments symbolise the relationships born during the exchange of goods – a way for far-flung communities to create a lasting bond, made by the breaking of a ring. This is the subtlety and glory of archaeology: to glimpse a lost world in the fragment of a small ornament.

Rituals and celebrationsFriendshipSymbols and myth
29 August 2022