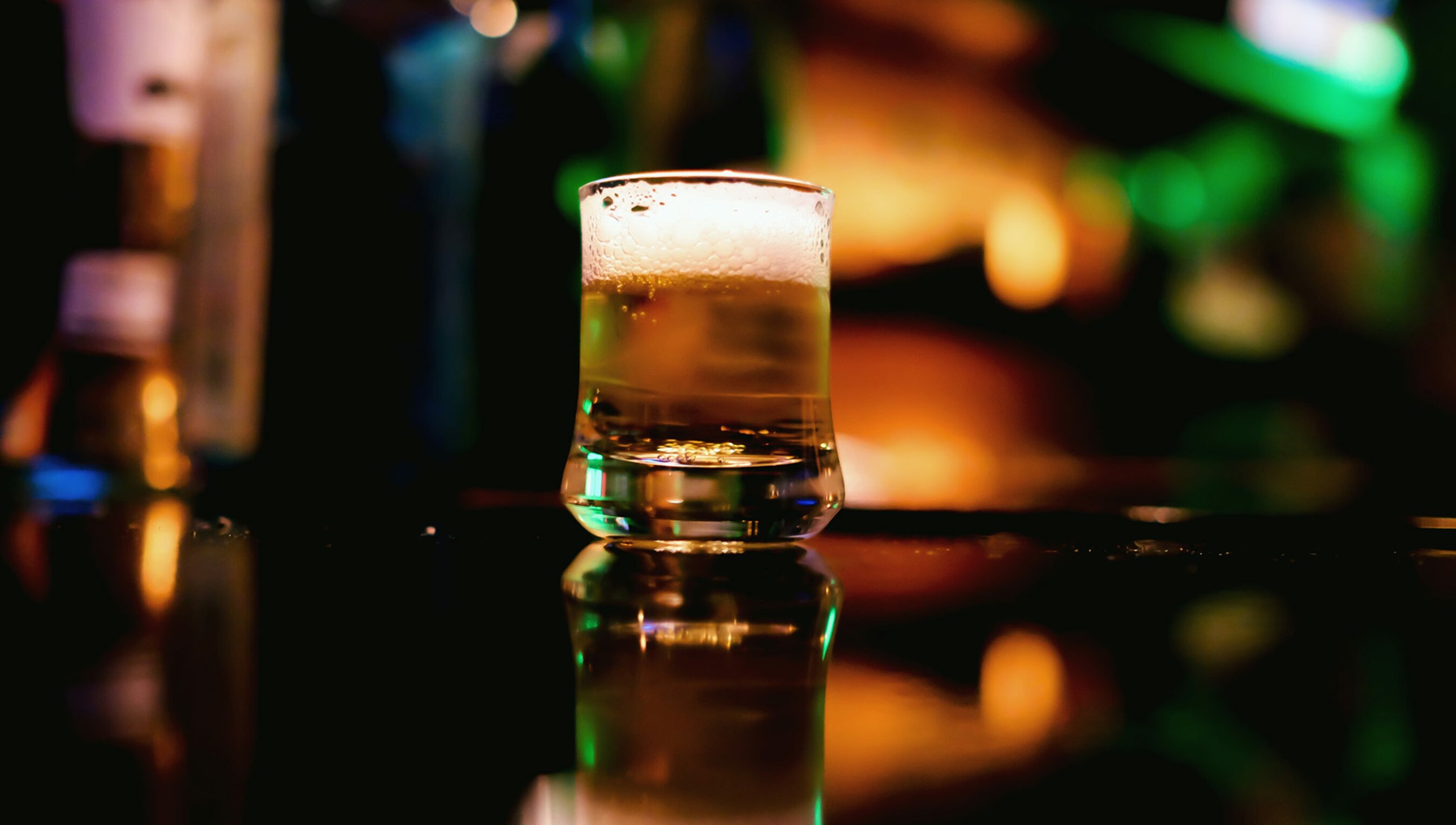 Here’s to my lovely, incandescent relationship with alcohol

is a writer and communications professional, whose work has been published by the LA Review of Books and Electric Literature. She has also worked as a reporter for The Times of India and The Hindu. She lives in Delhi, India.

The first time I drank alcohol, it was red rum straight from a quarter bottle – riding pillion as my boyfriend took us around a secluded part of the city of Lucknow, in provincial northern India. It was spring 2010, I was in the third year of law school, and 80 kilometres away from my hometown. I’d told him that I wanted to ‘enjoy a drink’ with him, and he’d obliged – though, at 20, I was still far from the contours of knowing how to enjoy drinking. I wanted to experience the high that came with it, but my boyfriend wanted me to learn the lesson of my life.

As he rode his Yamaha around, I took big swigs of the dark liquid. He’d given me a Cadbury bar to wipe away the bitter aftertaste of the rum. I finished almost the entire quarter like that: one swig rum, one bite of chocolate. What ensued were hours of blackout. I remember waking up at around dinnertime in my hostel room, flanked by friends and stuck in vomit-caked bedding.

I hadn’t realised what my boyfriend intended to accomplish that evening. Two days later, still arising out of the fog, I remember him laughing at my face. I felt small and cheated, and vowed never to drink again. But moving to Delhi a few years later, where I worked a tedious job as a junior associate at the High Court of Delhi, I discovered a different side to alcohol. Navigating my way through the tiring lanes of various courtrooms, each night when I came back home, a strange new malaise beckoned. For the first time I remember being bone-tired. One evening, coming back from work, I stopped by the neighbourhood liquor store and bought a couple of beers.

That night, I cracked open one of them, my first alone. Comfortable on the terrace garden of my aunt’s house, as the family fell asleep downstairs, I stared at the horizon, waiting for the fizz to die. And as I took my first sip of the cold liquid gold, I realised what freedom felt like. It was my birthday. I’d turned 22, and I’d gifted myself one of my most precious proclivities.

Those of my family who didn’t drink would never understand how beer soothed jittery nerves, or that nothing else could wash off the day’s tedium. The levity was mesmerising. I fell in love with the buoyancy that beer lent. Under its influence, I enjoyed the cool Delhi nights. Glugging the liquid throatily, I felt a sense of relief, and then I felt charged: with the slow release of the older, darker experiences leaving me, I entered into a lovely, incandescent relationship with drinking.

It was a way of pausing time, immersing myself in the moment and taking a mouthful from life’s waters

That first year, I mostly drank alone. Friends were capricious then, not wanting to ‘drink much’ lest they ‘become alcoholics’. As a nation, India’s obsession with quickly bracketing people who enjoy a drink as ‘raging alcoholics’ got the better of them. During the solitude of these drinking sessions, I turned to the page to process how I felt. I’d write out my hopes and dreams while drunk, most of them dwelling on my desire to be a writer. I read, and wrote profligately. Most nights I sat down with printouts of Brain Pickings articles, George Orwell’s essays, anything I found ‘readable’. Punctuated by swigs of beer, I’d make notes for hours. When in 2014 I moved to Chennai to pursue a journalism degree, the boldness of that decision was largely motivated by my solitary drinking sessions.

In Chennai, higher state taxes meant that the big-beer brands – Kingfisher, Heineken, Corona – were mostly too expensive to be stocked locally. So my friends and I shifted gears, and enjoyed the humid weather with some local Old Cask red rum, while British Empire became the new go-to beer. On thrifty weekends, we would scoot, hitch rides or take a bus to the nearest Union Territory, Pondicherry, where alcohol taxes were lower. There, we’d spend a weekend drinking Miller beers.

A year later, I travelled to Cardiff to complete my Master’s degree. I was anxious about the move. In Delhi airport, I sat at a bar with a pint of beer and some chilli chicken. This would be my first time away from India, and being a couple of pints down at the start of the journey was only appropriate. This also became a habit; each time I was at an airport, if I had time I would always squeeze in a beer. It was a way of pausing time, immersing myself in the moment and taking a mouthful from life’s waters. Airport drinking was a way to recall all those lived experiences, as though looking through a dusty windowpane, looking in while constantly looking out. While drinking, the past becomes something I can see, but not touch. Everything is blurred and indistinct but also immensely enjoyable, something that I lived wholly.

In Cardiff, I returned to my first love – drinking alone – savouring evenings sitting by the large window of my hostel room with a glass of wine as I worked on my thesis. Drinking helped me articulate the person I wanted to be. On my weekly stops at the local Tesco, I’d buy Heineken, which I’d drink while watching a Hindi movie as the skies darkened outside.

Alcohol became a way of life, over the years, a way of marking the good times. Sometimes even boredom could be mollified by gentle drizzles of wine or sturdy pints. Teaching myself, alone on this journey, drinking was a private passion. On dinner nights out alone, I would order a gin martini.

Coming from a family of alcoholics, I’d seen firsthand how drink could destroy families. Both of my father’s older brothers had lost their grip on life because of drink. In the mid-1990s, my father, in his own brief tryst with alcohol, found himself waylaid. He tried hard to hide his drinking from us, but the smell was all-pervading, and his delirious, bloodshot eyes couldn’t keep a secret. In a stupor, he’d undermine his colleagues and say bizarre things about my brother and me. On vacations, his naked need for drink would stall our plans. His senses were so muffled that he never realised how much his drinking hurt us. I knew that my genes could easily trick me into similar dependency, so I had to keep my guard up.

When I moved to Delhi in 2017, my flatmates were a rambunctious, intellectual pair of Bengali sisters who enjoyed their glass. From them, I learned that drinking was an outward-looking way to be, lengthening the brief moments of pleasure that life threw our way. On weekend nights, we’d have a smoky Indian-Chinese meal at a neighbourhood joint, then crack open a bottle of gin. Friday nights would bleed into Saturday mornings, us dancing, singing and holding one another in grace and love, shedding our pressured work lives.

We would travel to corners of Delhi to visit better and bigger booze stores, securing Ricard pastis and fancy bottles of Ballantine’s Scotch, as the store owners looked at us with a sublime pleasantness. With this kind of amateurish connoisseurship, we advanced our love for each other. We’d wait for all three of us, and friends (if any joined us for the evening), to gather – and only then start drinking. It was an ardent passion, a love affair that would help our friendship enlarge and strengthen.

In December 2017, I watched a Polish film that became a titan of my personal canon: All These Sleepless Nights (2016). Michał Marczak’s amorphous wonder takes the raw material of real life to create a layered chronicle of youth, memory and psyche. Marczak’s storytelling displayed on screen that smooth transcendence of being young, in a city of one’s choice, and trying to become oneself. Mesmerising and freefloating in its essence, the odyssey wended its way through a hazy year in the molten lives of two Polish 20-somethings. Obscuring the divide between fiction and documentary, the movie seemed to imitate life as I was living it.

Like the protagonists, I too was trying to find my character between the notes of life, punctuated by screeds of revelry, drinking, dancing and debauchery. Alcohol and its accompanying gaiety were a major factor in their tale, as it was in mine. The film, brilliant and gorgeous as it was, gave off an intense sense of spiritual yearning. It became a mainstay, etched in my memory as the piece of art that showed the potential for infinite possibility and the power of belief.

Over the past three years, my relationship with alcohol entered a different phase. I got hooked on the ‘chakna’, the beer and rum drinking culture at the Press Club of India in Delhi. I would forge some of the most meaningful relationships of my life here. Thanks to the mounting pressures of my last journalism job, I’d taken to drinking regularly, though not especially heavily.

I found that, by drinking, I could create a small space of my own, between the drink and myself. Reading, while sipping on a gin and tonic; watching a film while savouring a small pint; or trying to surreptitiously guzzle down a beer while travelling from the wine shop to a friend’s place. I knew that I ran the risk of being perceived as an alcoholic. But I always stayed in control.

Drinking in Delhi, with a motley group (mostly of journalists) also helped me understand other cultures, climates and preferences from the confines of my living room. I understood the importance of breaking ice with someone over a few drinks. I recognised in others the same alcohol-induced desire to connect with another soul – as if drinking together was a way to uncork a friendship.

When the pandemic came, finding us thoroughly underprepared, the lockdowns were strict and the Indian government categorised alcohol as a non-essential in most states. On 22 March 2020, as the prime minister Narendra Modi announced the new lockdown regulations, I hastily took an auto-rickshaw and bought what would be our flat’s last batch of alcohol — red rum, gin, white rum, whisky and strong stubby cans of beer.

At the start of the lockdown, drinking was a novelty. I worked till late in the evening, and made myself a drink or two afterwards. As boundaries between work life and home life blurred, the drinks became a daily marker. After a month of being locked in, we ran out of alcohol, and began scavenging the few shops still open for stock. Throughout the pandemic, I illegally bought cheap whisky, drank when I could, then regretted it.

But once the lockdowns eased, drinking returned to being a pleasure rather than a need. I felt grateful that I knew the difference, as my boyfriend and I stood on our tiny balcony, drinks in hand, bleary-eyed with confusion, and smiling at the knowledge of what we’d made our way out of. That, we hoped, was worth raising a glass to.

Altered statesAddictionFood and drink
25 May 2021