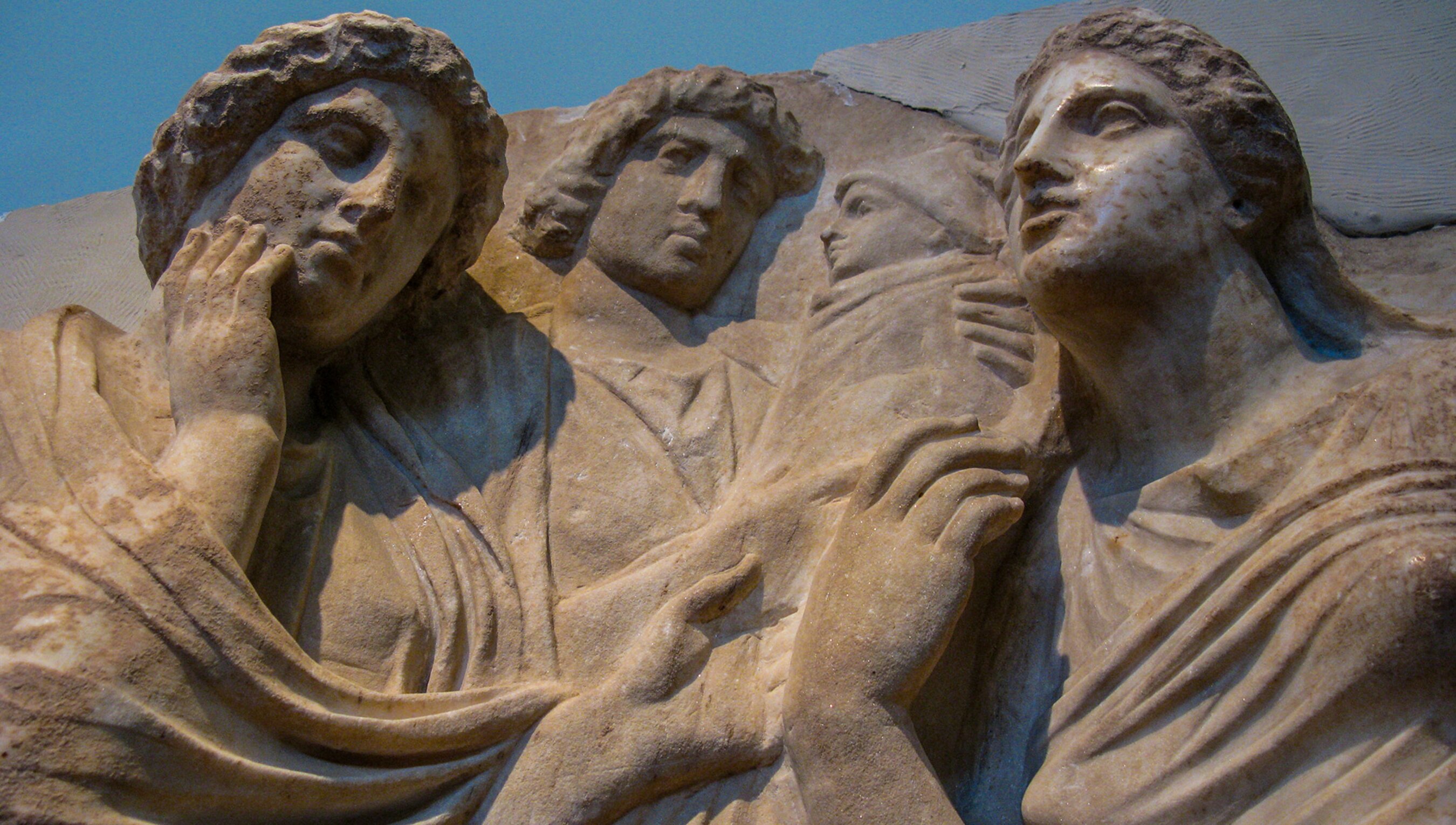 How do good conversations work? Philosophy has something to say

is professor emerita of philosophy at the University of Missouri-St Louis. Her books include What Gardens Mean (1998) and Two Thumbs Up: How Critics Aid Appreciation (2020).

Consider the many different purposes that can be served by conversation. Of course, we speak with others – and to ourselves! – to impart information. But we also exchange words to ask questions, forge connections, vent emotions, change attitudes, gain status, urge action, share stories, pass the time, advise, amuse, comfort, challenge, and much, much more. Examining what makes conversation work, and looking at how philosophers have thought about conversation, opens a window on to how language functions and how we function with language. So it is well to ask: what makes someone a good conversant? What makes conversation work?

British philosophers from the 18th century, who were fixated on impressions and ideas, would have taken successful conversations to be those that moved the relevant cluster of ideas from one conversant’s head to another’s. This idea, though tempting, turns out to be inadequate. The problem of other minds suggests we can never entirely confirm uptake: what could show that another had fully grasped our meaning? Moreover, notions of conversation such as this generally take words to be straightforwardly labels for things in the world and to parse sentences using a correspondence theory of truth that takes true sentences to match or refer to states of affairs that they describe. These expectations are quickly defeated as we can easily assemble a list of meaningful words that do not label individual things in the world in a straightforward manner. Consider: dog, politics, jumping, electron, gravity, centaur, square circle… So our understanding of words and what we do with them must be more complex. There’s much more involved in successful communication than the mere meanings of the words exchanged.

Most of all, the context in which utterances are delivered has a crucial bearing on their significance. To borrow a vivid example from Robert Stecker, the exhortation ‘The bus is coming’ can signify radically different things depending on the context. If we are late and the bus is arriving, I am urging you to sprint towards the bus stop. If we are at the bus stop already and you are standing in the street as the bus approaches, I am warning you to leap away before you are flattened. A variety of other factors – such as irony, satire and common idioms – can also displace words from their expected traditional meanings.

Accounting for such complexities, Anglophone philosophers in the mid-20th century attempted to analyse verbal communication in greater detail. J L Austin’s book How to Do Things with Words (1962) distinguished three different sorts of speech acts, that is, three different ways we can put language to use. He labelled them locutionary (saying something meaningful), illocutionary (what you intend by saying something; its ‘force’ in Austin’s jargon), and perlocutionary acts. The latter class is the most radical. It involves using words to accomplish something specific in the world. Examples include binding yourself to another by uttering ‘I promise’ or becoming married by uttering ‘I do.’ The expected consequences can unfurl only when certain conditions are met: think of the many surprises that can invalidate a marriage ceremony.

Not only must the speaker choose her words properly, but her conversant must be open to receiving them

Austin’s taxonomy of our speech acts goes some way towards illuminating what is happening in conversation, but it doesn’t answer the present question of what makes for a successful conversation. Another British philosopher, H P Grice, noted in 1975 that successful conversation is a cooperative enterprise rather than a series of disconnected remarks. Certain shared expectations are in place greasing the skids of our conversational give and take. In particular, he announced a ‘cooperative principle’: ‘make your conversational contribution such as is required at the stage at which it occurs, by the accepted purpose or direction of the talk exchange in which you are engaged.’ This principle is observed by following four maxims: of quantity (be informative), quality (be truthful), relation (be relevant) and manner (be clear). For Grice, we communicate by intending that others recognise our intentions to do so. Communication can be undermined if we violate any or all of the maxims – if we offer less information than is required or too much information that distracts; if we make false claims or claims for which we lack evidential support; if we embark on tangents; if we formulate obscure or ambiguous remarks; if we are prolix or disorganised.

Following Grice’s maxims helps ensure that our utterances convey the meaning we intended. But this is far from guaranteeing conversational success. Not only must the speaker choose her words properly, but her conversant must be open to receiving them. So what makes for a receptive interlocutor? It helps to be willing, deferential, interested, intrigued. We valorise conversations when we speak of them as flowing. Grice’s emphasis on cooperation is crucial here. Both parties to a conversation must want it to succeed. He posits a structure of mirrored and iterated intentions that facilitate conversational exchange. Working together, conversants can explore a subject matter or perform a task. Of course the division of labour will never be exactly equal. But successful and satisfying conversation results when participants share a communicative goal, enjoy a minimal match of manner and style, and accommodate one another’s interests, moods and needs.

These conditions do sometimes obtain. Granted, people differ in their levels of conversational engagement. Some are taciturn and need to be drawn out, others are prone to logorrhea and hog verbal space. Interest, admiration, and attraction can all facilitate conversational give and take. There were certain European institutions – the salons and coffeehouses of 17th- and 18th-century Paris and London – where bravura conversation was foregrounded. Wit was valued, erudition was as well. Even today, it can be fun to engage in a conversation where participants riff on a theme like jazz instrumentalists performing solos. There can also be a value to routinised, repetitive conversations as these can reinforce our sense of self and reaffirm the bonds that form our social network.

Why do some conversations seem pleasant, others off-putting? While some successful speakers seek to build up their conversational partners, others aim to belittle. Different attitudes towards a subject matter, different levels of knowledge, differences in how one’s day is going can all affect conversational flow. Someone who is especially knowledgeable or especially entertaining merits attentive listening, but not someone out to assuage her ego or score points. Certain purposes and certain conversational styles are inimical to satisfactory conversation. And there are some chasms that simply can’t be bridged. Consider the state of present-day politics, or even the divisions affecting present-day philosophy. Not all exchanges are cooperative in the manner Grice had hoped.

One habit threatens to sink cooperation perhaps more than any other: the phenomenon of being talked at

Imbalances of power are especially likely to taint these efforts. Power differentials between conversants play a key role in who speaks, who listens. Gender is clearly relevant since power is not equally distributed across this dimension. Deborah Tannen, the linguist and author of multiple books on conversation, frames her bestseller You Just Don’t Understand (1990) by claiming that conversations between men and women closely resemble anthropologists’ accounts of cross-cultural exchanges. That is, men and women inhabit different worlds with starkly different values and expectations. Tannen proposes that women view conversation as an opportunity to network and connect, while men instead talk in order to gain status and put others down. Of course, there are exceptions to this brusque generalisation, but Tannen offers evidence, both real-life examples and cases from fiction, to show that her framework often holds true. Exploring the phenomenon she calls ‘troubles talk’, she says that men generally try to offer a quick fix for whatever problem is being broached, while women tend to respond in the first person, telling of their own experiences that resemble the problem the speaker has described. In all likelihood, we could analyse troubles talk in terms of Grice’s cooperative thesis.

But one habit threatens to sink cooperation perhaps more than any other: the phenomenon of being talked at. We often defer to experts, acknowledging their greater or special life experience. But being talked at is different: it’s belittling. It treats the listener as an acolyte instead of a conversant. Rebecca Solnit’s book Men Explain Things to Me (2008) presents an extreme version of this phenomenon. At a dinner party, a man held forth at great and unwelcome length about a book he thought she could profit from reading. It turned out that she was in fact its author! I consider these instances of what I’ll label the Pygmalion Syndrome, the view that others, women in particular, are vessels to be shaped or filled.

Obstacles to conversation are not all immediately apparent, as is the case with micro-aggressions. The conflict management specialist Mary Rowe in 2008 introduced a useful companion category, called ‘micro-affirmations’, those ‘apparently small acts, which are often ephemeral and hard to see … which occur wherever people wish to help others to succeed. [They] are tiny acts of opening doors to opportunity, gestures of inclusion and caring, and graceful acts of listening.’ But not all have seen micro-affirmations as welcome. The philosopher Jill Delston, for instance, argues that they can harm when doled out inequitably and can accord undue influence to those who habitually dispense them. The idea of what makes for a successful conversation is always tricky, and always contested.

Whatever makes for good conversation, we can agree that it should be valued. As such, we should all find ways to enhance our conversational skills. One way to do that is what we’ve done here: to reflect on the features of satisfying, illuminating, thought-provoking, caring, searching, memorable conversation – which is, after all, the very best tool we have to create lasting bonds between one another.