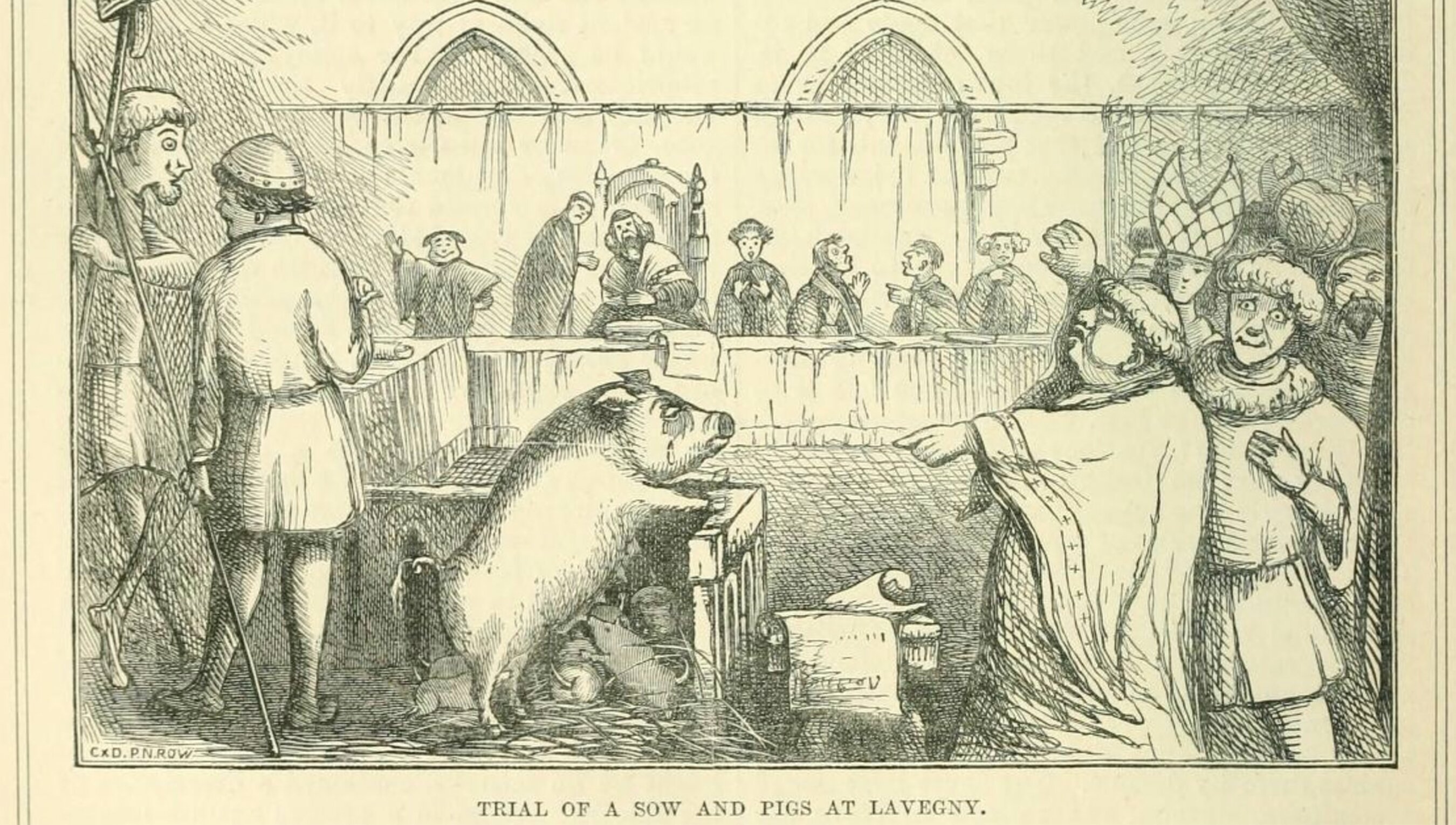 From The Book of Days: A Miscellany of Popular Antiquities (1869) edited by Robert Chambers. Courtesy Internet Archive

If animals are persons, should they bear criminal responsibility?

From The Book of Days: A Miscellany of Popular Antiquities (1869) edited by Robert Chambers. Courtesy Internet Archive

is the executive director of Belt Media Collaborative and the editor-in-chief for Belt Magazine; a contributing editor for the History News Network; and a staff writer at the literary site The Millions. His books include the anthology The God Beat: What Journalism Says about Faith and Why It Matters (2021), co-edited with Costica Bradatan; Binding the Ghost: Theology, Mystery, and the Transcendence of Literature (2022); and Pandemonium: A Visual History of Demonology (2022). He lives in Pittsburgh, PA.

If you were an animal in need of legal representation in early 16th-century Burgundy – a horse that had trampled its owner, a sow that had attacked the farmer’s son, a goat caught in flagrante delicto with the neighbour boy – then the best lawyer in the realm was Barthélemy de Chasseneuz. Though he’d later author the first major text on French customary law, become an eloquent defender of the rights of religious minorities, and be elected parliamentary representative for Dijon, Chasseneuz is most remembered for winning an acquittal on behalf of a group of rats put on trial for eating through the province’s barley crop in 1522. Edward Payson Evans, an American linguist whose book The Criminal Prosecution and Capital Punishment of Animals (1906) remains the standard work on the subject, explains that Chasseneuz was ‘forced to employ all sorts of legal shifts and chicane, dilatory pleas and other technical objections,’ including the argument that the rats couldn’t be forced to take the stand because their lives were at risk from the feral cats in the town of Autun, ‘hoping thereby to find some loophole in the meshes of the law through which the accused might escape’ like, well, rats. They were found not guilty.

Dismissing animal trials as just another backwards practice of a primitive time is to our intellectual detriment, not only because it imposes a pernicious presentism on the past, but also because it’s worth considering whether or not the broader implications of such a ritual don’t have something to tell us about different ways of understanding nonhuman consciousness, and the rights that our fellow creatures deserve. From our metaphysics, then, can come our ethics, and from our ethics can derive politics and law. There need not be a return of animals to the stand as defendants, but they’ve already had legal representation as plaintiffs. The Nonhuman Rights Project, led by the US attorney Steven Wise, has filed briefs on behalf of creatures such as the four captive chimpanzees Tommy, Kiko, Hercules and Leo in New York in 2013, and more recently Happy the elephant, a solitary pachyderm at the Bronx Zoo. Because it’s a phenomenon that’s newly pertinent, it’s imperative for us to think of the history of animal trials in a more nuanced light, beyond the mocking tone in which it can sometimes be discussed. ‘Some may shrug dismissively, drawing from these peculiar events the conclusion that our pre-Enlightenment relatives … were fundamentally irrational,’ writes the Canadian lawyer Anila Srivastava, yet she concludes that ‘the trials demonstrate unexpected ways of thinking about who or what the law acts upon.’

Animal trials also provide an indication not just about unexpectedly expansive legal reasoning, but a metaphysical position about the similarities between human and animal consciousness that is superior to the Cartesian position that reduced dogs and cats, pigs and cows, to intricate mechanisms. It would be foolish of us to think that the 16th-century French ecclesiastical court thought that rendering a verdict of anathema would have stopped rats from devouring barley, but that’s to ignore why such a trial was held in the first place. In Discipline and Punish (1974), Michel Foucault explains how premodern legal proceedings were not necessarily intended to reduce crime, or even to punish, but that they are better understood as ‘a political ritual’, as being among ‘the ceremonies by which power is manifested’. In trying a group of rats for eating crops, there was never an assumption that the rodents would somehow learn their lesson, for the trial wasn’t held for them, but rather for the humans who witnessed the spectacle. Ironically, then, their exoneration as secured by Chasseneuz tells us something surprising about what authorities believed concerning animal agency and interiority, consciousness and personhood.

For sure, not all animals put on trial – Evans records some 189 examples from the 13th until the 18th century – were fortunate enough to have representation as capable as Chasseneuz. Bulls, horses, donkeys and especially pigs were put on trial in civil courts for a variety of crimes, from murder to property destruction, and then often executed. But a surprising number of these creatures were exonerated as well, such as a French ‘she-ass’ put on trial for bestiality in 1750, who was ultimately found innocent because witnesses could attest to the donkey’s moral rectitude, while Jacques Ferron, the human defendant in the case, was sentenced to death. That evidence could be weighed and the outcome was unclear proves that animal trials may have been a ritual (though every trial is), but they weren’t a sacrifice.

Puss in Boots, Reynard the Fox, the Frog Prince – within these archetypal stories, animals speak across chasms of human-animal experience

The possibility that an animal could be found either innocent or guilty evidences a formidable respect for nonhuman consciousness, a sense that, despite their profound otherness, they are still invested with the powers of thought and intentionality. Contrasting modernity’s largely instrumental understanding of animal-hood, whereby their only functions are as pets, beasts of burden or food, Evans argues that in ‘ancient and medieval times domestic animals were regarded as members of the household and entitled to the same legal protection as human vassals,’ concluding that, before the Enlightenment, animals were ‘invested with human rights and inferentially endowed with human responsibilities’. None of this is to pretend that scholastic theologians were somehow nascent PETA ideologues; meat may have been expensive and rare on peasant tables, but there were precious few vegans during the Middle Ages. Rather, it is to claim that culturally and theologically there was an understanding of animals – their individual uniqueness and independence, as well as their relationship to humanity – that was arguably more sophisticated than the dominate schema that came to prevail.

To claim that an animal is a type of intricate robot – a demonstrable falsehood for anyone who has ever had a dog or cat – is both a less true and a more pernicious myth than the one that puts a pig on trial. It would be both overly reductionist and unfair to blame René Descartes’s Discourse on Method (1637) for the widespread instrumental view of animal worth. More accurate to say that Descartes either anticipated or took part in a burgeoning shift of modernity that increasingly separated humanity from the animal kingdom of which we are a part, and which did so by rendering our fellow animals as without voice, without mind, without worth beyond what they can do for us.

To consider the existence of animal trials is to enter into a realm that feels more like a fairy tale than historiography. That those two genres appear to converge in the spectre of Chasseneuz defending rats like some kind of reverse Pied Piper of Hamelin isn’t incidental, for folktales, fairy tales and fables have long promoted a type of general wisdom that understands that animals and humanity are not so different. Puss in Boots, Reynard the Fox, the Frog Prince – within these archetypal stories, such animals speak across chasms of human-animal experience, of a past when women and men didn’t see such creatures as irrevocably different from us. As the ancient Roman poet Ovid wrote in his Metamorphoses, his great epic of natural transformations: ‘No species remains constant: that great renovator of matter, Nature, endlessly fashions new forms from old.’

There are risks in anthropomorphising animals – in pretending that they are human rather than acknowledging that we are animal. Our choices are not between assuming that animals have no inner life or imagining that they have one identical to our own. If anything, behavioural biologists and philosophers have beautifully explained in recent years the sheer incommensurability of animal intelligence, the strange ineffable personhood that is exuded by a Siamese cat, a golden retriever, an African grey parrot, a cephalopod. ‘Consciousness surely did not … suddenly erupt into the universe fully formed,’ writes the Australian philosopher Peter Godfrey-Smith in his book Other Minds: The Octopus, the Sea, and the Deep Origins of Consciousness (2017). ‘The history of life is a history of intermediaries, shadings-off, and grey areas … Suppose someone asks: do bacteria really perceive their environment? Do bees really remember what has happened? These are not questions that have good yes-or-no answers.’ Both fairy tales and animal trials return us to an earlier variety of thinking that was willing to countenance the more accurate view that there was intelligence behind the eyes of the beast, that they were no mere robots or automata. We can’t understand what it would be like to be a bat, or an octopus, or a dog, but across that gap of difference, there can still be an acknowledgement of a fellow consciousness, capable of joy and pain, perhaps love as well.

Today, the Nonhuman Rights Project (NhRP) is dedicated to the belief that certain animals deserve an acknowledgement of bodily integrity, among other positive rights, by dint of both their ability to feel pain and their obvious consciousness, which Wise believes indicates a degree of ‘personhood’. The NhRP has attempted to rectify through the court system what they view as injustices committed against animals, and to hopefully set a precedent for acknowledging their legal rights. All of the aforementioned filings had at their core an argument that the animals in question should be granted a degree of autonomy; that, as conscious beings, as demonstrated by certain cognitive tests, their oftentimes extreme restrictions were fundamentally inhumane, and thus illegal. Happy the elephant, for example, had been confined to a relatively small enclosure where she was kept by herself, and Wise argued that she’d be better served in a more natural environment. Frequently, petitions written by the NhRP have been rejected by judges since they apply to nonhuman persons; but, in their goal of shifting the conversation around animal rights, the NhRP has been stunningly successful, particularly in the habeas corpus motion hearing held for Happy, the first time that a nonhuman was ever afforded such a legal standing, even if the motion was ultimately denied.

In a previously denied motion to grant a habeas corpus hearing for the chimpanzee Hercules, even Justice Barbara Jaffe wrote in her decision that: ‘Efforts to extend legal rights to chimpanzees are … understandable; some day they may even succeed. Courts, however, are slow to embrace change …’ – which is as radical an argument as Wise could have perhaps hoped for from the byzantine and glacial chancery. Whether or not courts come to grant greater rights of personhood to animals, as Judge Jaffe believes they eventually will, the reappearance (if not literally) of animals in court signals the beginnings of a cultural shift in how we understand consciousness throughout the wide biological kingdom. What is ultimately being put on trial is Descartes’s automaton, and what is at stake is the exoneration of nature itself. What could result, at least intellectually and spiritually, if not legally, is a more just and equitable, empathetic and fair world, not just for humans, but for chimpanzees and elephants, dogs and rats.