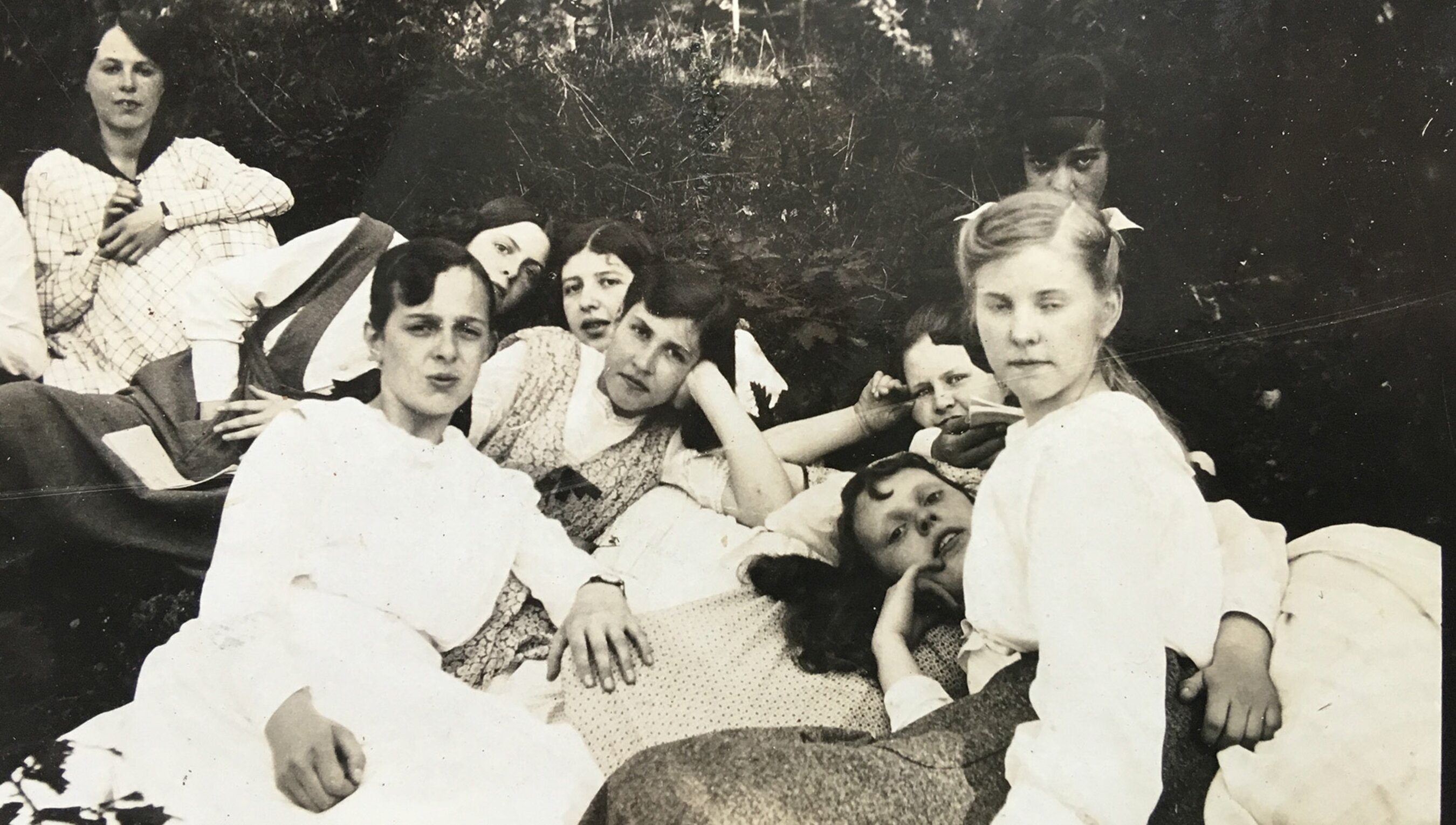 Sigbrit (foreground, centre-left) and her friends, pictured in 1917. Photo courtesy the author

Sigbrit (foreground, centre-left) and her friends, pictured in 1917. Photo courtesy the author

is a writer. Her collection of short stories Live Show, Drink Included (2018) was short-listed for the 2019 Edge Hill Prize. She lives in London.

In our daily lives we have no choice but to experience the world in chronological order. We can’t fast-forward through the bits that we know will be awful, or rewind to moments we especially enjoyed. Our days are driven ever onwards in lockstep with the clock. But when we think, and when we write, we can throw off those bonds. We can race back through decades, leap into the future, stretch a day and make it last a whole book, or dispatch a century in a couple of paragraphs.

In the first of her 2017 Reith lectures on writing about the past, the British novelist Hilary Mantel quotes a stanza from a W H Auden poem, ‘As I Walked Out One Evening’ (1940). The poem is about time, mortality and the fleeting nature of love, but Mantel focuses on these lines: ‘And the crack in the tea-cup opens/A lane to the land of the dead.’ In the poem, its meaning is that we’re all heading for the grave. For Mantel, though, it opens up a different question: could this metaphorical lane support a two-way traffic? Could we, the living, find a way to travel back beyond the parameters of our own lives to find our dead? They ‘have a vital force still’, she says, ‘they have something to tell us, something we need to understand’.

The person I’m pursuing through time is my Swedish grandmother, Sigbrit Wijk. We weren’t close when she was alive, but now, in my 50s, I am curious about the past: sometimes, when I’m cooking, I get out the copper-bottomed saucepan that once belonged to her and wonder at the difference in our lives. How did we get from her to me?

I got to know Sigbrit in my teens. She was a tall woman, then in her 70s, big-boned and upright, usually dressed in plain grey or beige skirts and fine cotton shirts, sometimes adding a pearl necklace or a coral broach. She wore sheer stockings and sensible lace-up shoes; her silvery hair was loosely coiffured and combed back from her face. She still drove around in an alarmingly ancient Volvo, and still swept into restaurants demanding attention. She was humorous, snobbish, tactless, imperious; sometimes nasty, sometimes kind. A word she liked to use in English was ‘terrific’, as in ‘he drove terrrrrifically fast’ or ‘she was terrrrifically rude’, the r’s rattling on her tongue like a snare drum. Thinking of it now, I can hear the ring of the 1920s so clearly.

My journey along Auden’s lane began not in memories, however, but with a battered red guidebook from the 1920s that my husband picked up in a secondhand shop in south London: the Ward Lock Handbook to Paris and Environs. It’s nothing much to look at, about the same size as a Baedeker guide, cloth-bound in a wine-red colour, faded on the spine, battered with use. What is captivating is the voice. It’s written in a naively conversational style, full of perishable details such as the excellent quality of the station buffet at Calais, and advice on how to dress (‘It is a mistake and evidence of bad taste to get oneself up […] in costumes suitable for shooting on Scotch moors or exploring Central Africa’). There are observations on the difficulty of obtaining afternoon tea, not to mention coins and matches, since all wood and metal were consumed in ‘the War’. You can almost smell the dust and tears of the Great War on these pages.

I had a strong sense that this book could be a kind of portal to another world, but at first I didn’t understand how to use it. Then my father reminded me that his mother had spent a year in Paris in 1920-21. And I was on my way.

Sigbrit was born in Gothenburg in 1902. Her life spanned an extraordinary sweep of history: the Russian revolution, two world wars, the invention of antibiotics, the food industry, television, youth culture, cosmetic surgery, and more. In her old age, she liked to remind us that in Paris she had studied at the Sorbonne and heard the philosopher Henri Bergson lecture. It sounded impressive. Most likely, she was enrolled in the three-month summer programme for foreigners – Les Cours de civilisation française de la Sorbonne. I’m sure she did hear Bergson, much as I, some 60 years later, squeezed into a crowded University of London lecture hall to hear Jacques Derrida. What either of us absorbed from those encounters is much less certain.

Time, change, memory, flow: these were the great preoccupations of Bergson’s work. In the early 20th century, he was the most famous philosopher of his day and was widely read beyond the academy. His ideas on what in The Creative Mind (1939) he called ‘the continuous melody of our inner life’ had a profound impact on the work of many Modernist writers, Marcel Proust in particular; and in 1927 he was awarded the Nobel Prize for literature.

When Bergson first began to publish, the increasingly globalised industrial world was still struggling to regulate and categorise time. Between the 1840s and ’90s, the needs of railway networks in Europe, the United States and India led to countries adopting standardised ‘railway time’, rather than each town setting its clocks according to the Sun. In 1884, the International Meridian Conference in Washington, DC nominated Greenwich in London as the prime meridian and divided the world into 24 time zones, but a good deal of resistance and local variation remained. Even at the end of the 19th century, some regions of France were still operating four different time zones; trains ran according to Paris time, which was nine minutes 21 seconds ahead of Greenwich Mean Time; and all station clocks were set five minutes fast in order to encourage passengers to board (a custom that my Paris guide says ‘no longer holds’ in the 1920s). An international conference in Paris in 1912 produced an agreement to standardise global time using regular wireless signals transmitted around the world from the Eiffel Tower.

Bergson’s work offered a challenge to this totalising drive. For him, it was important to distinguish between mechanical or scientific public time – useful for running factories and trains – and the way that individuals experienced time at an emotional and psychological level. Inner time, which he calls ‘durée’ – duration or ‘enduring time’ – cannot be measured the way we measure physical space. It is not a line or a series of links that can be chopped into discrete units. Time, as we experience it, is about change and movement. Duration, says Bergson, ‘is the continuous life of a memory which prolongs the past into the present’.

So what do I remember? I remember that Sigbrit was more freespirited than my sweetly straightlaced 1950s parents. She and my grandfather had lived in Thailand in the 1930s and, she told us, ‘Every Sunday the cook would put some hashish in the curry and then we’d go to sleep and have beautiful dreams.’ I remember her fine sense of the absurd and her willingness to recount stories against herself. But she also had a mean streak; she was kinder to my brother than she was to me, because he was a boy and named after her dead husband.

I also remember a conversation we had during the last of my visits to her, in 1981, the year that Prince Charles married Lady Diana Spencer. She pointed to a picture of Lady Di in the newspaper and said: ‘Look, Vicky. She is exactly the same age as you, and look what she has achieved.’ I had just spent a riotous year at art school in England learning to drink pints and making action paintings with my head, and here was my grandmother complaining that I wasn’t yet engaged to a member of the royal family. There we sat, side by side in separate galaxies.

Lately, I’ve come to understand this exchange in a different way. I’ve been reading through the hundreds of letters that Sigbrit’s grandmother, mother and aunts exchanged over the course of their lives. There are tantalising glimpses of the young Sigbrit over the years: a joyous child in 1913, playing and leaping about ‘as usual’; a sociable teenager in 1918, wide-eyed and glowing at the wonder of her first grownup ball; a sulky 20something in 1925, ‘like a princess’ who ‘cares only for her pleasures and clothes’. The more I read, the more I saw what pressure she was under as a young woman, trying to find her place in the world. Her grandmother, Hilma, favoured Sigbrit’s serious older sister Margit, and the letters are full of disapproving comments about Sigbrit’s flighty nature and lack of focus.

In 1924, she spent four months in London improving her English, coming home to Sweden looking ‘adorably sweet’, with plucked eyebrows and ‘tightbobbed’ hair. Her cousin Lottie, who had travelled with her, had ‘shingled’ hair and ‘claims to be engaged’. Sigbrit was being tightlipped about everything: ‘So I guess, à la [her mother] Issi’s youth, that means she’s been diligent [in her search for a husband] with variety [but] no results.’ Four months in England and not even a proposal! (A whole year and what have you achieved?!)

Without memory, Bergson argues, we would keep being born anew, freshly ignorant in every instant. But with memory we can extend ourselves beyond a single life to embrace our grandparents and their parents, since each generation leaves its imprint on the next. To some degree, I am who I am today because of Sigbrit’s long shadow, my choices confirmed by what I saw in her and didn’t want. I’ve always valued my mind more than my face; I’ve never longed for pearls. And so the present contains within it what Bergson calls ‘the ceaselessly growing image of the past, or, more profoundly … [the] still heavier load we drag behind us as we grow older.’

I feel this especially at night as I lie waiting for sleep. I close my eyes and slip from one pool of memory to another, revisiting people now dead, seeing myself walk around a corner or along a stretch of road that I walked when I was 18 or 25 or 30. I slip in and out of time, looping back to moments that seemed of no account when I lived them. Or I run along Auden’s lane to find the people I never knew, who speak to me even if they cannot hear my replies.

Memory and nostalgiaMemoirMindfulness and meditation
8 September 2020