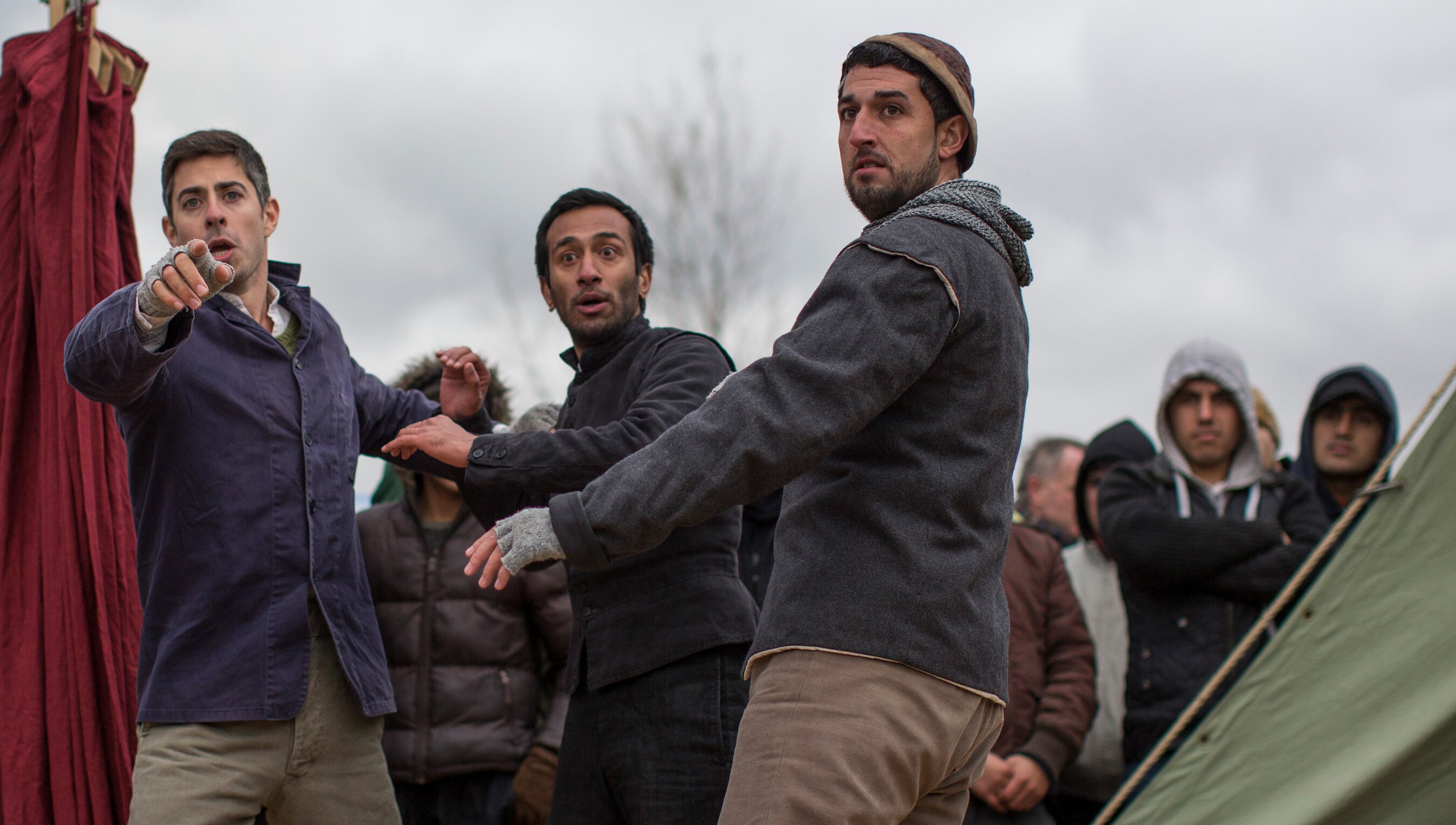 Naeem Hayat as Hamlet, from Shakespeare’s Globe company, performs to migrants in the Jungle refugee camp on 3 February 2016 in Calais, France. Photo by Dan Kitwood/Getty

Much ado about uncertainty: how Shakespeare navigates doubt

Naeem Hayat as Hamlet, from Shakespeare’s Globe company, performs to migrants in the Jungle refugee camp on 3 February 2016 in Calais, France. Photo by Dan Kitwood/Getty

is a professor of law at King's College London. His latest book is A Secular Europe: Law and Religion in the European Constitutional Landscape (2012). He is currently working on his next book, entitled The Poet of Uncertainty: How Shakespeare Helps us Navigate an Uncertain World.

William Shakespeare lived in an age of uncertainty. His society was traversing a number of unpredictable challenges that spun from the succession of the heirless queen Elizabeth to the ascent of a new class of merchants. But the biggest issue had to do with religious conflicts. In the premodern world, religion provided absolute certainty: whatever we knew was implanted in our mind by God. We didn’t have to look any further. Once that system of beliefs started to collapse, Europe was left with a yawning gap. Religion no longer seemed capable to explain the world. René Descartes and Shakespeare, who were contemporaries, gave opposite answers to the sceptical challenge: Descartes believed that our quest for knowledge could be rebuilt and founded on indubitable certainties. Shakespeare, on the other hand, made uncertainty a leitmotiv of all his works, and harnessed its creative power.

‘Who’s there?’ is the opening line in Hamlet. It expresses uncertainty about the apparition of the ghost of Hamlet’s father. The whole play is marked by a deep doubt about how perception can mislead us: has the ghost materialised or is it the product of our restless mind? This sweeping type of uncertainty, let us call it philosophical doubt, has to do with the limits of human ability to know the world from a subjective viewpoint. How can we be certain that our beliefs are anchored in an indubitable perception? What if we are dreaming or hallucinating? Hamlet is a young philosopher who is incapable of making up his mind about anything.

Contrast Hamlet with Iago in Othello:

… I hate the Moor:
And it is thought abroad, that ‘twixt my sheets
He has done my office: I know not if’t be true;
But I, for mere suspicion in that kind,
Will do as if for surety …

Even though Iago lacks knowledge, he treats his suspicion as if it were certain. Indeed, psychological certainty about oneself or others is ephemeral and allows great room for deception and manipulation. How certain can we be of Iago’s honesty? Most people in Shakespeare’s Venice report a high level of confidence. Othello even describes Iago as a man ‘honest and trust’. Yet, Iago is the paradigm of evil. This is a clear case of divergence between psychological certainty and epistemic standards. Regrettably, it is indeed possible to be psychologically certain about something that is factually incorrect.

Three separate enquiries stem from the imaginary disagreement between Descartes and Shakespeare. Can we even compare a philosophical project with a poetic vision? What does a view from uncertainty mean? How do we live well with uncertainty?

Poets have long been denied the right of residence in the republic of philosophers. The main charge against poets is that their art is not likely to educate the masses to be good. Plato castigates poetry and claims it should be expunged of images that command excessive emotions: gods cannot be portrayed as moody or weak or as having too much pleasure; that would send the wrong message to the people. Heroes should not be shown as doing monstrous deeds; they would no longer be seen as models. More generally, poets have a tragic worldview that captures psychological conflicts within someone’s soul, but don’t advance recommendations as to how to deal with them.

Shakespeare would be no exception. Othello, the military hero, is a monster in his bedchamber, and a tyrant as ruler of Cyprus. Hamlet’s psychological conflicts lead to a bloodbath. It seems that the view from uncertainty is a tragic worldview; the philosopher would like to transcend that worldview: conflicts inside or without one’s soul can be resolved. Knowledge is not only possible, it should also aspire to being grounded on certain foundations. But how does the philosopher’s view from certainty fare? Descartes believed that our system of knowledge should aspire to the level of precision of mathematics. The world’s geometrical reality could be represented by precise algebraic symbols that left little room for uncertainty. However, we now know that the mathematics of uncertainty is everywhere: from probability to statistics, from quantum mechanics to chaos theory, leading all the way to algorithmic decision-making.

Uncertainty then spills into several dimensions of life: it begins with decision-making under conditions of ignorance, and ends up with the acknowledgement that, at times, there is simply no way to know. There is no way of knowing some aspects of the external world that behave according to quantum physics or chaos theory. Hamlet has no way of establishing the existence of the ghost. Similarly, there is no way of knowing other minds: nobody has a way of ascertaining the real intentions of Iago.

Shakespeare’s vision from uncertainty brings together the imagination of a poet, the judgment of a philosopher, and the creativity of a scientist. Being capable to stare into the abyss without being swiped away emotionally is a great attitude for whoever wishes to further our understanding of the world and the way we live in it. The poet John Keats described it in 1817 as the negative capability: ‘when a man is capable of being in uncertainties, mysteries, doubts, without any irritable reaching after fact and reason’. By refusing to colour the world with his own rose-tinted spectacles, Shakespeare allows greater room for systematic understanding. He has an intuitive grasp of human limitations of knowledge, and to this extent he painstakingly alerts us to the biases and prejudices in our judgment.

The great puppetmaster would still face the question: is it worth living a life where you can control everything and everyone?

Othello is as much the executioner as he is the victim of Venetian prejudice. When the Moor asks for ocular proof of Desdemona’s infidelity, his jealous mind is leading him astray. Jealous beings crave certainty of the wrong type: they want to be sure that their doubts are correct; they don’t want to calmly examine the evidence. Indeed, Othello goes on to accept Iago’s fabricated evidence of Desdemona’s guilt (the handkerchief) as a proof beyond reasonable doubt. Shakespeare thus brings to the stage the tragedy of our human condition: we crave certain knowledge to put our anxiety to rest, but we have no way of achieving it. In the process, we give up our more cherished bonds. Certainty of the kind required by Othello is not achievable, and to pursue it at any cost can turn out to be a dramatic mistake. Our human quest for certainty to quell our anxieties tends to turn us into irrational agents: we trade mediocre certainties for real freedoms.

But does that mean that we are doomed to a tragic ending? Does it mean that a poet’s vision has nothing to say about how to live well? Shakespeare doesn’t want to lecture anyone. Moralising is another way of creating certainty out of chaos, and that would impinge on the view from uncertainty. It would require creating cardboard characters: villains with no redeeming features; heroes with no faults; fools who have no wisdom; kings who rule for the country. Falstaff’s contagious love for life would be frowned upon. No doubt, the moralists do. But not Shakespeare. His wisdom and his vision are not carved in stone, they are patiently crafted out of the complex timber of life.

Uncertainty makes freedom and creativity possible. Imagine for a moment a life of absolute certainties. We would know our time and place of death, when we’d fall in love, and what our job would be. Who would be our friends and who the enemies. Now imagine an AI dystopia where every decision is based on the processing of billions of data. One person, let us call him Faust or Prospero, would have control of all the data and would nudge people’s behaviour at his own whim. This would grant ultimate control over people’s lives, choices and freedoms. But the great puppetmaster would still be faced with a question: is it worth living a life where you can control everything and everyone? Prospero’s answer is negative. That is why he buries his staff and drowns his book. But make no mistake: when Prospero gives up his power over the world, he doesn’t give up the possibility of making sense of the human condition. Violence and conflicts arise from the confrontation of dogmatic, certainty-obsessed worldviews. The vision from uncertainty asks us to keep making sense of our life without imposing our values over one another.

This vision requires active contemplation of the world and humanity. Shakespeare’s language is capable of creating a ‘brave new world’, it can shipwreck boats and control people. It can re-invent the human. It is a thoroughly terrifying art that amazes and stuns. Shakespeare, like Prospero, knows what to do: it is time to pardon all the mistakes made by humans who want to rule the world by linguistic fiat. And to be pardoned for indulging in the language game, we should constantly forgive one another for making each other believe and for deceiving each other. Forgiving and giving up power – the power of linguistic mystification – are fundamental to rebuilding a spirit of trust. Shakespeare’s scepticism is compatible with the human quest for truth. To live in an uncertain world means accepting that our quest for truth is limited and fraught with errors; yet we cannot but engage with it: Ulysses’ last journey beyond the pillars of Hercules is the image of humanity bent on our next quest, sailing an uncertain sea without anxiety or sadness. I’d much rather navigate this uncertain world with Shakespeare than be fooled into believing with Descartes that humans have a way of building our house of cards upon a bedrock of certainty.