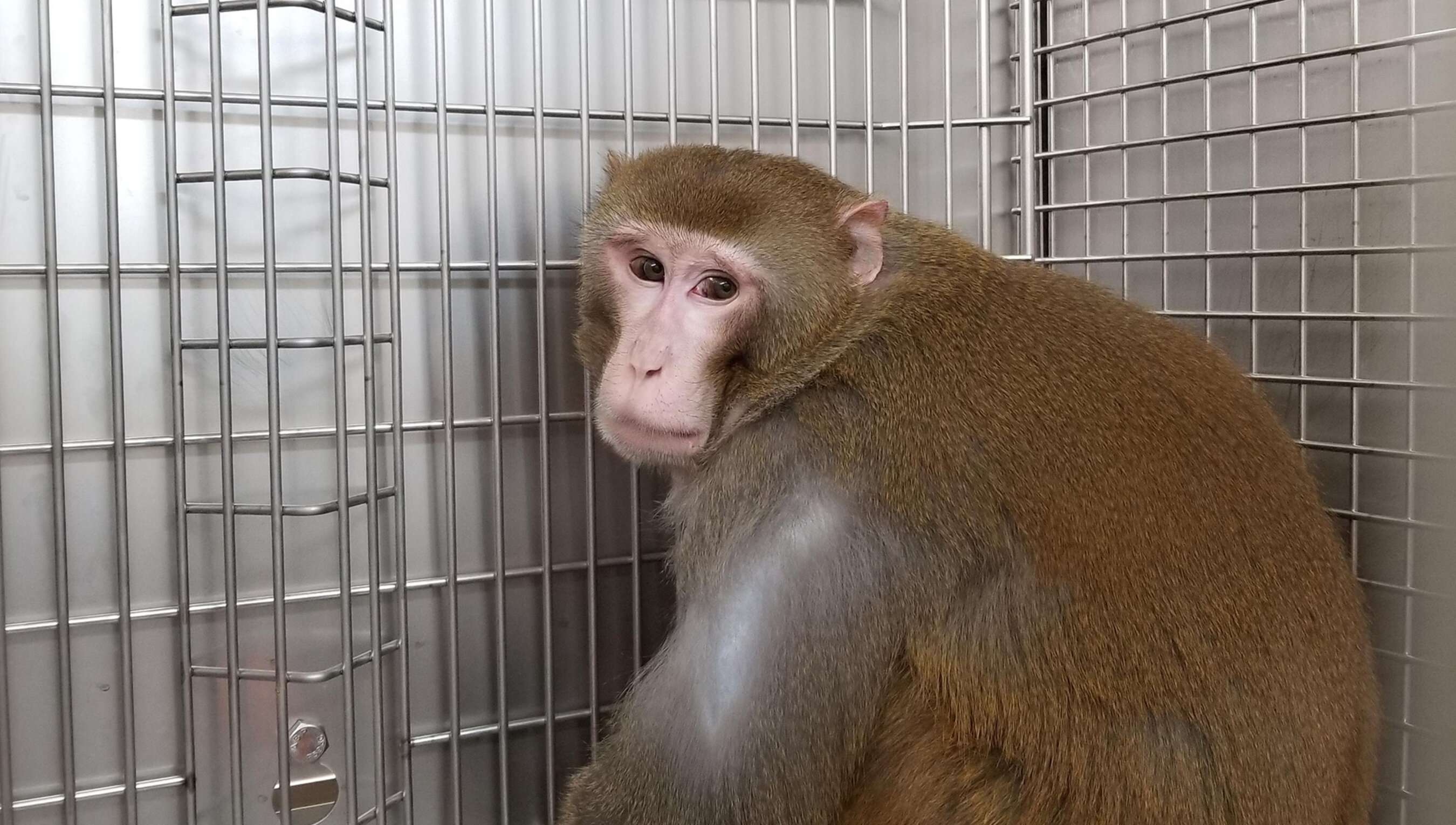 My body is a map of medical memories. Each marked place on my embodied landscape recalls to me an experience of pain and healing, worry and hope. That corporeal map signifies something greater to me too, because I feel that on it is inscribed the suffering of animals forced to undergo invasive experiments in biomedical laboratories.

These animals’ experiences don’t map directly on to my own. When my body was invaded and caused to feel pain, it was always with my consent, and with the knowledge that my healthcare team acted with intention to improve my life. The physical and emotional wellbeing of laboratory animals, by contrast, is routinely sacrificed with no benefit to them – and, in the overwhelming majority of cases, to human health either.

Yet my health traumas shed light on animals held captive for research in our labs.

For one thing, I know what it’s like to feel vulnerable in my body. The periodic and painful tightening of my left calf recalls me to the moment in 2019 when a hospital ultrasound technician’s eyes widened as she assessed the images on her screen. The two of us then walked slowly through hall after hall to reach the emergency room. There I encountered none of the ER’s famously long wait times; a massive deep vein thrombosis in my left leg earned me immediate attention and a CAT scan revealing a small pulmonary embolism. For the rest of my life, I will take blood-thinning medication. Because the kind I take now has no effective reversal agent, fatal bleeding remains a risk factor should I experience a car crash or other major accident.

Across my abdomen are holes that mark the day, six years earlier, when my surgeon and his robot assistant pulled out my cancerous uterus, assorted other reproductive organs, and 29 lymph nodes. On my chest is a scar where a port was subsequently placed to aid flow of chemotherapy drugs into my body, and on each hip is a tiny tattoo that guided irradiation of my pelvis. Papillary serous carcinoma is a rare and aggressive variant of uterine cancer, and I remain grateful to have recovered. But ‘recovery’ is a qualified term for some cancer survivors. My feet fire with chemotherapy-induced neuropathy, my digestion is troubled thanks to the effects of radiation, and my mobility is limited as the result of a double-pelvis fracture partly caused by both external and internal radiation.

I could write about my journey from Virginia to the Cleveland Clinic in Ohio to probe why I was constantly diagnosed – or, as it turned out, misdiagnosed – with urinary tract infections. I could detail how, after cataract surgery in my 40s, subsequent detachment of my retina and surgical retinal repair, I had to keep my head positioned down for 50 minutes out of every hour for 10 days. And on and on.

The 75,000 monkeys currently held in laboratories just in the United States likely know the feeling of vulnerability, too. Years ago, I spent 14 months observing baboons in Kenya, who roamed free over the savannah of Amboseli National Park, moving in groups anchored by matrilines, or groups of related females. Their lives in no way mirror those of experimental laboratory monkeys.

Four baboons lived in the laboratory of the researcher Bruno Reichart in Munich, Germany, who said this to Scientific American magazine in 2018: ‘They can hop around, eat, drink, and they are enjoying life. They watch TV – their favourite is the cartoon with the chipmunk.’

The baboons, it turns out, did these things after hearts from genetically engineered pigs had been sewn into their chests. The idea is that, eventually, pigs’ hearts will help humans in need of cardiac transplants. All four monkeys were killed, one pair at 90 days following surgery, the second pair 90 days after that. From my years of research into animal cognition and emotion, I have no doubt that these baboons had wished to live – and that the ‘donor’ pigs had wished not to become vehicles for harvesting organs.

I am moved, too, by a rhesus macaque called Cornelius held since 2010 at the Wisconsin National Primate Research Center (WNPRC) at the University of Wisconsin in Madison. Had Cornelius been born in the wild, he would have grown up surrounded by his mother and aunts, nursing and cuddling and playing and exploring his world. At puberty, he would have transferred to another group to make his way into adulthood. At the WNPRC, where more than 1,800 other monkeys are also confined in laboratories, Cornelius has experienced nothing like this, nothing remotely natural for his species.

Cornelius was born on 16 May 2010. Eight days later, he was tattooed on the ear, later on his chest and left thigh. Unlike my own medical tattoos, his come with a number, R10033. He was nursery-reared because his mother rejected him. He has been mostly caged alone since, except when he was used in breeding. Over the years, Cornelius has been used in experimental procedures including those related to polycystic ovarian syndrome and the neural circuitry of emotion.

In image after image of Cornelius taken over months, he is alone in a cage. His posture is one of a depressed and withdrawn animal. He has been treated by lab researchers for frequent diarrhoea and for hair-pulling, which I recognise as signs of stress. At the WNPRC, Cornelius simply has no chance to be a monkey, and to live a life where his body and his mind are his own.

I wouldn’t find these monkeys’ suffering to be ethically acceptable even if it could be shown that it somehow contributes to improving human health. But the chances are slim that it does. In a 2014 paper in the BMJ, the medical sociologist Pandora Pound and the epidemiologist Michael B Bracken conclude that ‘even the most promising findings from animal research often fail in human trials and are rarely adopted into clinical practice.’ The following year, the neurologist Aysha Akhtar pointed out that, back in 2004, some 92 per cent of drugs passing preclinical tests, including those tested on animals, failed to reach market. And the failure rate had actually increased to nearly 96 per cent by 2015. These failure rates hold back good science, science that’s urgently needed.

An example of animal research leading us in circles is Alzheimer’s, a disease of the brain characterised by accumulated plaque, a substance made up of amyloid protein. A person with Alzheimer’s will experience cell death that causes dementia, leading to loss of memory and even of identity, a terrible fate for the patient and their family. Mice have been the experimental animal of choice in seeking to develop treatments yet, because mice don’t contract Alzheimer’s disease, their use in studies is problematic. It’s not unusual for the experimental drugs to work on the mice in the sense of removing their brain plaques but, when tried on people, the drugs make no positive difference – and can cause harm.

The most successful, as well as the most ethical, science of human health does not and will not involve the use of animals

By September 2019, for instance, several companies had announced that their Alzheimer’s drugs (termed BACE inhibitors) had failed late-stage clinical trials. ‘Although the drugs successfully blocked the accumulation of amyloid protein in mice, they seemed to worsen cognitive decline and brain shrinkage in people,’ reported Nature. Interviewed in the journal, Bart de Strooper, a molecular biologist, put it this way: ‘The biggest mistake you can make is to think you can ever have a mouse with Alzheimer’s disease.’

Researchers have responded to this biological reality by inducing a greater variety of genetic mutations in more and more mice, creating entire lines in which brain plaques cause memory problems. Yet the likelihood of helping human Alzheimer’s sufferers using mouse models remains low, to say the least.

Experiments with animals have, of course, led to helpful health treatments. In earlier centuries, mouse models were key to the development of penicillin; experimentation with dogs led to success in blood transfusions and the development of insulin; and research with dogs, rodents and monkeys brought about the polio vaccine. More recently, cancer research using rodents and monkeys has helped researchers grasp facts about tumour biology, which has lead to oncology treatments.

However, in the 21st century, with so many advancements in bioscience, our moral and scientific calculus must be different. The route forward lies not in bigger and better cages or nicer enrichment to help laboratory animals pass their endless hours in confinement, or in strengthening weak guidelines for use of laboratory animals. Instead, it rests on recognising that the most successful, as well as the most ethical, science of human health does not and will not involve the use of animals.

Among the most promising non-animal methods are phase 0 studies in which toxicity is tested on humans directly. We can apply genetic editing technology to create different lines of human cells and human tissue models. And we have much to gain from organ-on-a-chip technologies that replicate the architecture and function of human organs in small 3D models. Investment in further developing these and creating other human-based approaches can be twinned with a recognition that animals have a right to the integrity of their own bodies and their own minds.

My own medical vulnerability has acutely heightened my empathy for the vulnerability of laboratory animals – not only the monkeys, dogs and mice I’ve written about here, but also rats, hamsters, ferrets, rabbits, cats and, increasingly now too, the octopus and squid becoming ever-more popular models for genetic exploration. The physician Hope Ferdowsian and colleagues, writing in the Cambridge Quarterly of Healthcare Ethics in 2019, argue the case well:

Currently, animals are deliberately and commonly chosen for research as a result of their easy availability and manipulability, as well as institutional and cultural biases in society. Like human populations who were historically and systematically targeted, animals also have a ‘frequently compromised capacity for free consent’.

Would I trade my recovery from cancer for knowing that no animals had been harmed in laboratory experiments? This question is one that animal activists are often asked, but I’m not convinced it’s a relevant one. After all, as the statistics I’ve cited indicate, most animal testing today doesn’t help human patients. In the cases where it has, patients shouldn’t be made to take on a burden of individual guilt. It’s the research system as a whole that needs to change. Instead, the scars on my body act as a constant reminder of why I have turned from scholarship on animals to agitating for animals and for our compassionate treatment of them.

In line with Ferdowsian’s vision, what I want most is for the map of animals’ lives on my body to become a historical artefact. Let it represent the way we used to do things, a way increasingly superseded by compassion for animals and more successful science for ourselves.

AnimalsBioethicsThe body and physical health
5 May 2021