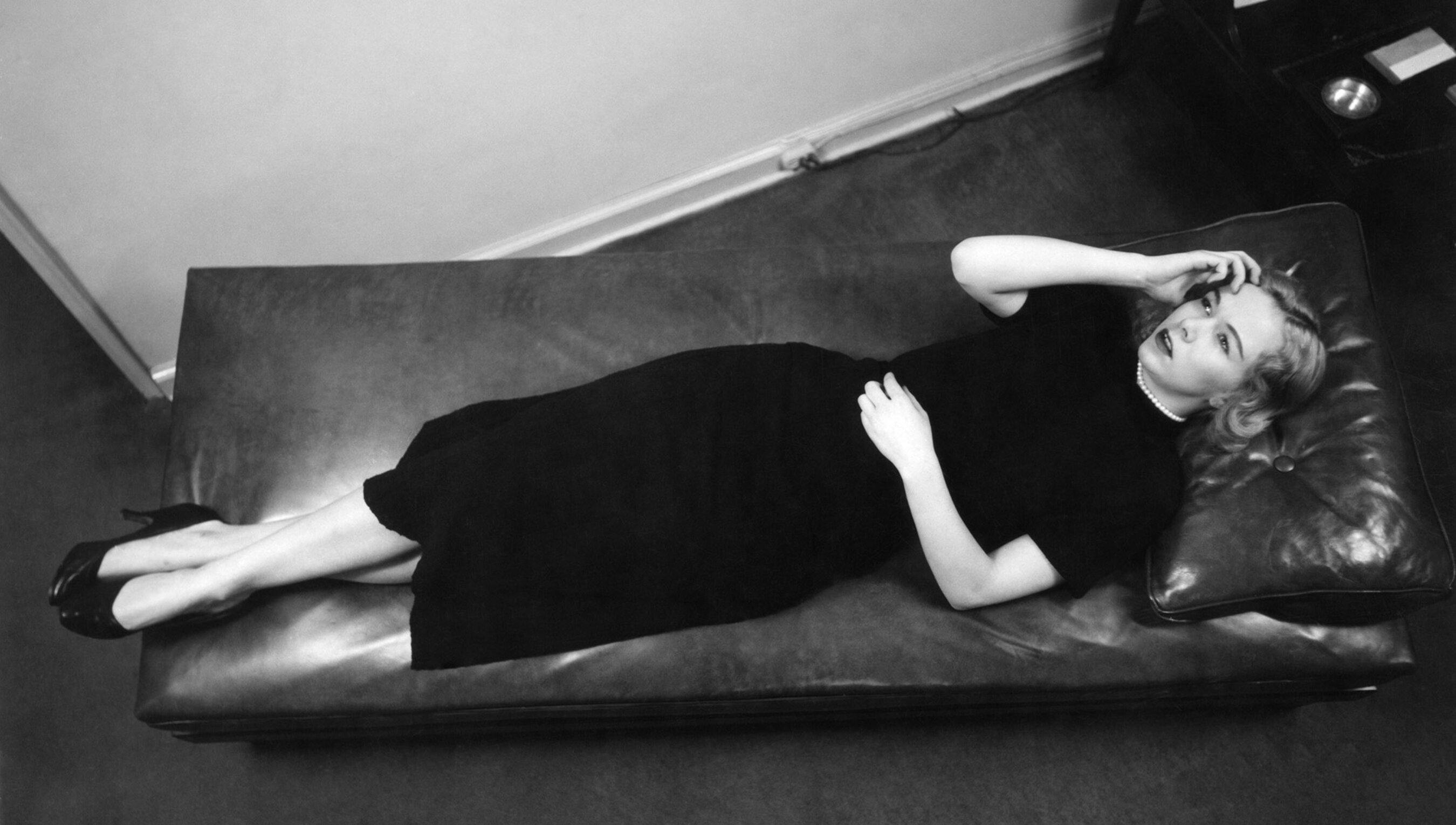 Analysis is hardcore therapy. I wanted to be hardcore. I didn’t want someone to listen to me babble about my childhood. I’d tried talk therapy and I bombed. I had thought about myself by myself for long enough. I wanted someone to dissect me, to castigate me, to prod me into being a happier person, or give me handwaving directions toward satisfaction. I had turned my critical eye on myself for long enough. I needed a second reader.

After I graduated from college in California, I moved back east and lived on the Upper West Side of Manhattan. From my fifth-floor walk-up, I thoroughly researched psychoanalysis in New York City. I theorised – or fantasised – I would have many options. I was not wrong. New York was a buffet of psychoanalysis, from the loose hippie Gestalt practitioners to the fundamentalist societies who took the word of Sigmund Freud as gospel. The William Alanson White Institute of Psychiatry, Psychoanalysis and Psychology had a generous sliding scale and a relatively sane approach to analysis: for example, they didn’t insist on the Freudian five-analytic-hours-per-week (an analytic hour is 50 minutes). Cost was important because I was a broke graduate student, and the White Institute offered an enticing $10 per session. Though grounded in Freud, they didn’t insist on five sessions per week. I wasn’t that hardcore. Three would suffice.

They mailed a detailed questionnaire that was catnip to me, an English PhD candidate and Freud zealot who coveted psychoanalysis at a bargain price. I wrote and wrote and wrote. Soon after I mailed it back, a secretary called to set up an interview. I walked purposefully downtown to the institute around 20 blocks south of where I lived on Amsterdam Avenue, ravenous for self-revelation. As the neighbourhood transitioned from tenement to brownstone, I was confident I was travelling toward sanity.

The White Institute occupied several floors of one of those brownstones. The man who screened me was very white and slightly crooked, as if he didn’t want to alienate potential patients with his full height. He was slim, older, tweedy and very serious, which conformed to my notions of how an analyst should be. In my mind, there was an endless supply of these men at the institute: genteel, faintly desperate intellectuals, all elbow patches and cockiness, psychology PhDs who had grown bored with rich-people problems. Instead of sports cars or 25-year-olds, these men marked their midlife crises by becoming Freudian acolytes and entering analyst training. I remember reading somewhere that New York City had many more psychoanalyst candidates than people who wanted to be analysed. I didn’t know it, but I was abnormally in demand.

Graduate school was both a miserable and a wonderful time, the latter because I followed my intellectual curiosity to far-flung places, one of which was fin-de-siècle Vienna. I read Freud like the Orthodox read the Torah. I knew about his disciples and their disciples too; the schisms and falling-outs and ostracisms in psychoanalytic history were like a prime-time soap opera to me. I read constantly and shamelessly in grad school, mainly library books piled around my bed that reached the height of the mattress. When I left grad school, I had to ask a friend with a pickup to drive me to the library in New Jersey to return them: the greatest privilege granted to me as a grad student was checking out books for indefinite amounts of time. The best trick I learned in grad school was how to read ‘in and around things’, as one of my two advisors put it. After Freud, I moved on to his followers, Judases except for his daughter Anna and his icky biographer Ernest Jones. Carl Jung, Sándor Ferenczi, Alfred Adler and Otto Rank were all devoted to him – and then abandoned him. I fell into a Freud hole as eagerly as any of them and didn’t want to return to my life, to my self-recriminations and stacks of library books. Analysis was just falling further.

When I mention or recollect my psychoanalysis, my explanation and my defence are the same. I was a graduate student who dived into the breathtaking world that was Freud’s work and his legacy. Intellectual genealogies are one of my obsessions, and the drama of Freud and his faithless followers was my favourite kind of saga: bursting with arguments about abstract ideas. Really, ‘I was a graduate student’ roughly translates to ‘My motives are both strange and unrecognisable to me now.’ I swooned, prone to intellectual infatuations. Freud was a persistent suitor.

Why was I so eager to be psychoanalysed? Was it something I needed, or an opportunity to float my theories about Freud and Ferenczi to someone who shared my enthusiasm? I wanted to exercise the critical powers I was developing on myself. I wanted analysis to give me an internal makeover. I expected it to change my harried life, in which I managed New York City on a stipend, student loans and occasional editorial paid work. There was a pattern in my perpetual dissatisfaction I stumbled on when I was reading in and around Freud, ruminating about ego and superego. I repeatedly chose mentors who were tough and smart as those were the qualities I desired. Flashes of brilliance were compensation for the many times I couldn’t get their attention. Their disinterest stung and yet it was familiar. I didn’t feel good unless something – or someone – was making me feel bad.

From the beginning, my sessions with my analyst were combative. To be psychoanalysed is to have a relationship where more than two-thirds of what you talk about is the relationship, and ours was a nasty divorce without the halcyon memories of courtship or marriage. I couldn’t help but fight with him. He probed, he insisted, he persisted in asking me questions I refused to answer. In turn I would offer him revelations from my whirring brain, readymade snippets of internal monologue. But he wanted to find out about me using his methods. The problem with your analyst being in training is he doesn’t know how to finesse transference, Freud’s term for the knotty connection of analyst and patient. My transference played out like he was an overbearing store manager and I was a rebellious salesclerk.

Our exchanges occurred three mornings a week in his office on the Upper East Side. He was an unlikely candidate for a therapist, I thought from the beginning, as he had something distant and slightly cruel about him. His office was full of tropical fish, which made me think of a cut-rate Bond villain. It was furnished with two chairs, a couch, the fish tanks (the only personal touch), and a side table where he would keep a mug of something. I never knew what but I knew that office as intimately as my childhood bedroom or my husband.

In time, I moved from the face-to-face of the chair to the detachment of the couch, lying on my back, anxious and guarded. He would press for context, soliciting details I didn’t want to proffer. Our dialogue usually ran something like this:

Him: You said you were having dinner with a friend. Which friend?

Me: Why do you want to know that?

Him: Because it’s useful.

Me: Why? Why do you want to know who I was having dinner with?

Me: Is that more important than what I realised during our conversation?

Him: [After more silence] It’s important that I learn about your life.

Him: Where did you have dinner?

Me: And I suppose you want to know what movie we saw?

My analysis was a failure under the rubric Freud describes. Yet through terminating it I gained confidence in my instincts, not just my intellect

In retrospect, I am not surprised that my relationship with my analyst had the same qualities as my relationships with my academic advisors, both tough, smart and indifferent to me. While it’s now clear that I went into analysis to decide whether I wanted to stay in academia, my analysis didn’t help me work through that question. Years later, a mediocre performance at my comprehensive exams and the frustration of writing papers that were must-reads for a thimbleful of people drove me out of school and into reviewing books for Entertainment Weekly. I graded the books on a scale from A to F, like student papers.

Freud opens his prescriptive essay ‘Analysis Terminable and Interminable’ (1937) by discussing the end of an analysis. He writes:

We must first of all decide what is meant by the ambiguous phrase ‘the end of an analysis’. From a practical standpoint it is easy to answer. An analysis is ended when the analyst and the patient cease to meet each other for the analytic session.

Despite his matter-of-fact tone, Freud knows this is a complex issue. The pronouncement that the patient is leaving analysis is bound to cause the analyst to turn his thoughts to transference and away from the patient.

The incident that precipitated the end of my analysis was yet another argument, this one about my analyst’s infuriating habit of being late to our sessions. I confronted him about it from the couch the fourth or fifth time it happened with an undercurrent of rage that made me shake.

Me: Not good enough.

Me: It’s extremely rude and unprofessional of you.

Me: Are you late for your other patients?

Me: Then why do you keep showing up late for my sessions?

Him: Maybe I’m resentful because relative to my other patients you pay me so little.

Me: You are using me to advance your career. Is that not enough?

That argument and my anger coloured our remaining sessions. On the 86th Street crosstown bus, among the haggard caregivers of the next generation of the 1 per cent with their charges in enormous strollers and the people too old to brave the subway steps, I thought about how my analyst was getting more out of my analysis than I was. My transference was fascinating.

When I told my analyst I was quitting, he was not surprised. He continued to apologise, and I wonder now if he was afraid of me disgracing him at the White Institute, calling him out as a lousy analyst-in-training working through his money issues on my meagre dime. Before I stopped seeing him, I returned to Freud and to ‘Analysis Interminable and Terminable’. Soon after the passage above he clarifies:

The other meaning of the ‘end’ of an analysis is much more ambitious. In this sense of it, what we are asking is whether the analyst has had such a far-reaching influence on the patient that no further change could be expected to take place in him if his analysis were continued. It is as though it were possible by means of analysis to attain a level of absolute psychical normality – a level, moreover, which we could feel confident would be able to remain stable, as though, perhaps, we had succeeded in resolving every one of the patient’s repressions and in filling in all the gaps in his memory.

My analysis didn’t give me ‘a level of absolute psychical normality’. In Freud’s utopian vision, psychoanalysis could transform you by forcing you to relinquish your questionable habits and self-doubt. But for me, nothing was resolved. My analysis was a failure under the rubric Freud describes. Yet through terminating it I gained confidence in my instincts, not just my intellect. I learned how to quit, a skill I’ve used many times since I last walked out of that office into the waiting arms of the crosstown bus. I boarded gratefully and headed west.