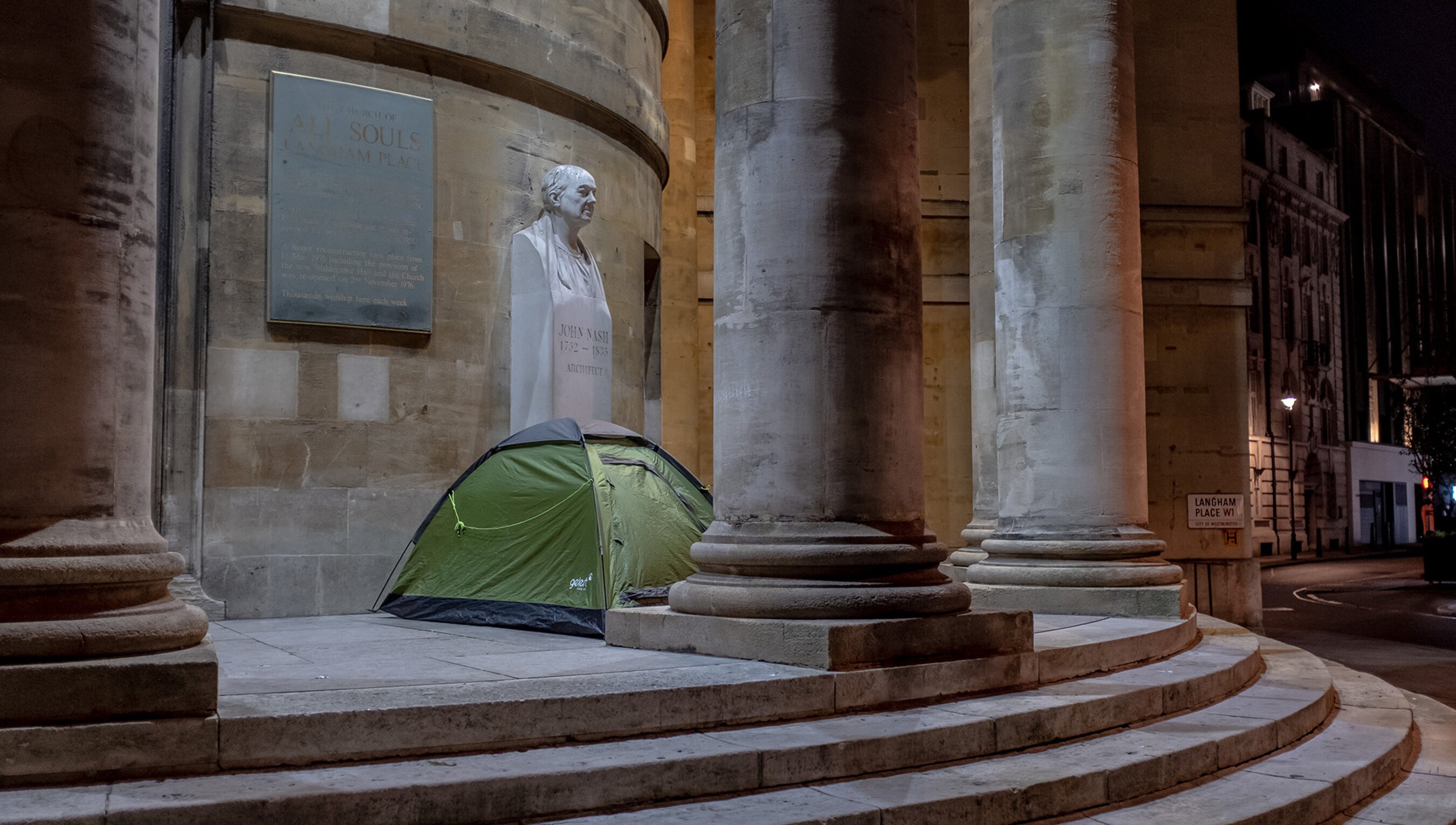 All Souls Church in central London. Photo by Andrew Testa/Panos

All Souls Church in central London. Photo by Andrew Testa/Panos

I haven’t taken a poll, but my sense is that most people have mixed feelings about pity. To the extent that we associate it with compassion, pity seems to be a good thing, and we shake our heads in disgust and wonder at those icy individuals who, without a smidgen of fellow feeling, can saunter by an old woman, bundled in coats and blankets, sleeping on a grate on a Minnesota winter’s night. On the other hand, most of us wince at the thought of being the object of pity and sneer at those who can’t seem to pull themselves out of the muck of feeling sorry for themselves.

The philosophers are also of mixed feelings about the value of pity. While acknowledging the problematic forms that this feeling can take, perhaps I can raise some second thoughts among those lovers of wisdom who haven’t a kind word to say about this emotion.

Take Friedrich Nietzsche, for instance. I have always applauded his unique emphasis on the importance of light-heartedness, of alacrity, by which he certainly didn’t mean the ersatz type of cheerfulness we’re treated to by the serving staff in restaurants. Nevertheless, it makes me grimace to hear the heavy blows that the philosopher with the hammer lays on pity and compassion. Nietzsche provides an abundance of low-hanging fruit for us to select from, but just take this indictment from his book The Antichrist (1895):

Pity preserves things that are ripe for decline, it defends things that have been disowned and condemned by life, and it gives a depressive and questionable character to life itself by keeping alive an abundance of failures of every type. People have dared to call pity a virtue … people have gone even further, making it into the virtue, the foundation and source of all virtues … pity negates life, it makes life worthy of negation … pity is the practice of nihilism … pity wins people over to nothingness!

Before concluding that Nietzsche was hard-hearted, we need to take note that he wrote in praise of the good will, and not in the chilly Kantian sense, but as a fellow feeling, an instinctual overflowing warm-heartedness that is the flower of self-confidence, of a sense of strength earned by graduates from the military school of suffering – a school whose dictum is: ‘What doesn’t kill you makes you stronger.’

In contrast, those too depressed or weak to bear their suffering are left with a single quiver, the ability to coax pity. In his book Human, All Too Human (1878), Nietzsche unleashes this sling:

[D]espite all their weakness, they still have at least one power: the power to hurt. When expressions of pity make the unfortunate man aware of this feeling of superiority, he gets a kind of pleasure from it; his self-image revives; he is still important enough to inflict pain on the world.

Nietzsche isn’t alone among philosophers in pulling faces at pity and, heaven forbid, self-pity. The arch-rationalist Baruch Spinoza wrote in the Ethics (1677), ‘A man who lives according to the dictates of reason, strives, as far as he can, not to be touched by pity.’ There are other philosophers, Plato included, who believe that abject sorrow for others makes us weak and who sneer at pity as if being pitied were the worst of all fates.

On the whole, pity’s lowly reputation is a projection of our swollen egos, since feeling pity is frequently connected with assuming an air of superiority. A few days ago, I pulled up to a traffic light and was approached by a dishevelled middle-aged man with a limp, toting a cardboard sign scrawled with the message: ‘I’m a veteran. I’m hungry. Please help.’ I felt pity for the man as well as a tinge of that fake-humble notion that parades under the words: ‘There but for the grace of God go I.’

Nietzsche and Sigmund Freud taught that human beings are creatures burdened with mixed emotions. In fact, for Freud, there are few characteristics more important in life than being able to tolerate ambivalent feelings. Emotions cannot be objectively divided up like objects in the external world. Though Nietzsche scholars have made noble efforts to distinguish between pity and compassion, the furniture of our inner world, in general, is far from being as clearly and objectively differentiated as, say, tables and chairs. Still, for us all-too-human rational bipeds, it is rare to experience a pure emotion absent the drop of another feeling.

Since Nietzsche and others think otherwise, I respectfully hesitate to insist that it’s self-evident that someone is less than human if he or she can look at the bloody products of the harrowing machine of human history without a sense of pity. Forget human history, let’s take a personal perspective.

A couple of years ago, I taught a 20-year-old student who lost both his parents, over the course of a year, to different diseases. Sitting silently in the back of a large lecture hall, he looked like the knight of the doleful countenance. Some missed assignments gave me the excuse to corral him into my office for a talk. It took a while, but eventually he revealed his tragic news. Mea culpa, but I couldn’t help but shake my head and softly mutter ‘I’m sorry,’ as in that much-abhorred expression: ‘I am sorry for you.’ Yes, I pitied him, and would have worried about myself if I hadn’t.

David Hume would have to concur; a capacity to experience a one-directional sympathy, call it ‘pity’, is one of the ties that bind. Nietzsche is correct: there are some underground men and women who manipulate this capacity. There are also aspects that are masks for arrogance.

I would also refrain from praising a form of pity that, under appropriate circumstances, did not call a person to action. As the American author Richard Wright observed in his novel Native Son (1940), pity can tempt us as ‘a consoling reassurance which leads us to believe … that, in pitying, we have even done something to right a wrong.’ Feeling for someone else can put us to sleep and make us imagine that a tear in the eye removes from us any need to do something about the situation that evoked that tear. And yet, every affect, and perhaps every virtue, can take a twisted form.

There will be times in life when we’ll be in extremis and want to be pitied, cradled and taken care of

Søren Kierkegaard maintained that we should relate to ourselves as we would to a neighbour. If I ought to feel pity for others who are caught in the spider clutches of some horrible fate, then it would be reasonable for me to feel sorry for myself when I’m entrapped in a web of sorrow and despair. As a genealogist of morals, an updated Nietzsche (much to his disgust) would have to appreciate the fact that the ability to tolerate a feeling of vulnerability has floated to the top of our register of virtues. Given that register, the need to keep a stiff upper lip and soul, to be impervious to personal disasters, would bespeak a weakness.

To return to a personal perspective, we are currently coping with a serious illness in my family. There are hours and days when I feel hopelessness and pity for both the sick family member and myself, the person who must sit by a loved one in agony, unable to do anything, including distract myself. There’s a selfish side to my experience as well. I’m angry that this Golem has burst into our lives when I had some pleasant post-retirement plans. Now and again, someone will slip me the bromide: ‘It could be worse.’ As for that bit of consolation, Arthur Schopenhauer can speak for me: ‘The most effective consolation in every misfortune and affliction is to observe others who are more unfortunate … But what does that say for the condition of the whole?’ So yes, ‘Woe is me!’

Of course, if I let myself be consumed by self-pity to the point of being unable to reach through my pain and offer loving comfort, then feeling sorry for myself would be a vice. Still, when the floor falls out from under us, we should give ourselves and each other room to pull the covers over our heads. Perhaps those who can’t allow themselves that weighty experience of sad indolence will have a hard time putting their arms around someone else who is hurting.

Make no mistake about it, there will be times in life when we’ll be in extremis and want to be pitied, cradled and taken care of. Since time immemorial, the last words of soldiers dying on the battlefield have often been child-like cries, ‘Mama! Mama!’ George Floyd’s lips formed those very same words when his life was being choked out of him in Minneapolis last year.

I can’t recall what theory we were debating, but in the 1980s the philosopher Stephen Toulmin instructed me: ‘Abuse is no argument against use.’ Likewise, the fact that there are unhealthy forms of pity should not prevent us from recognising its humanising element.