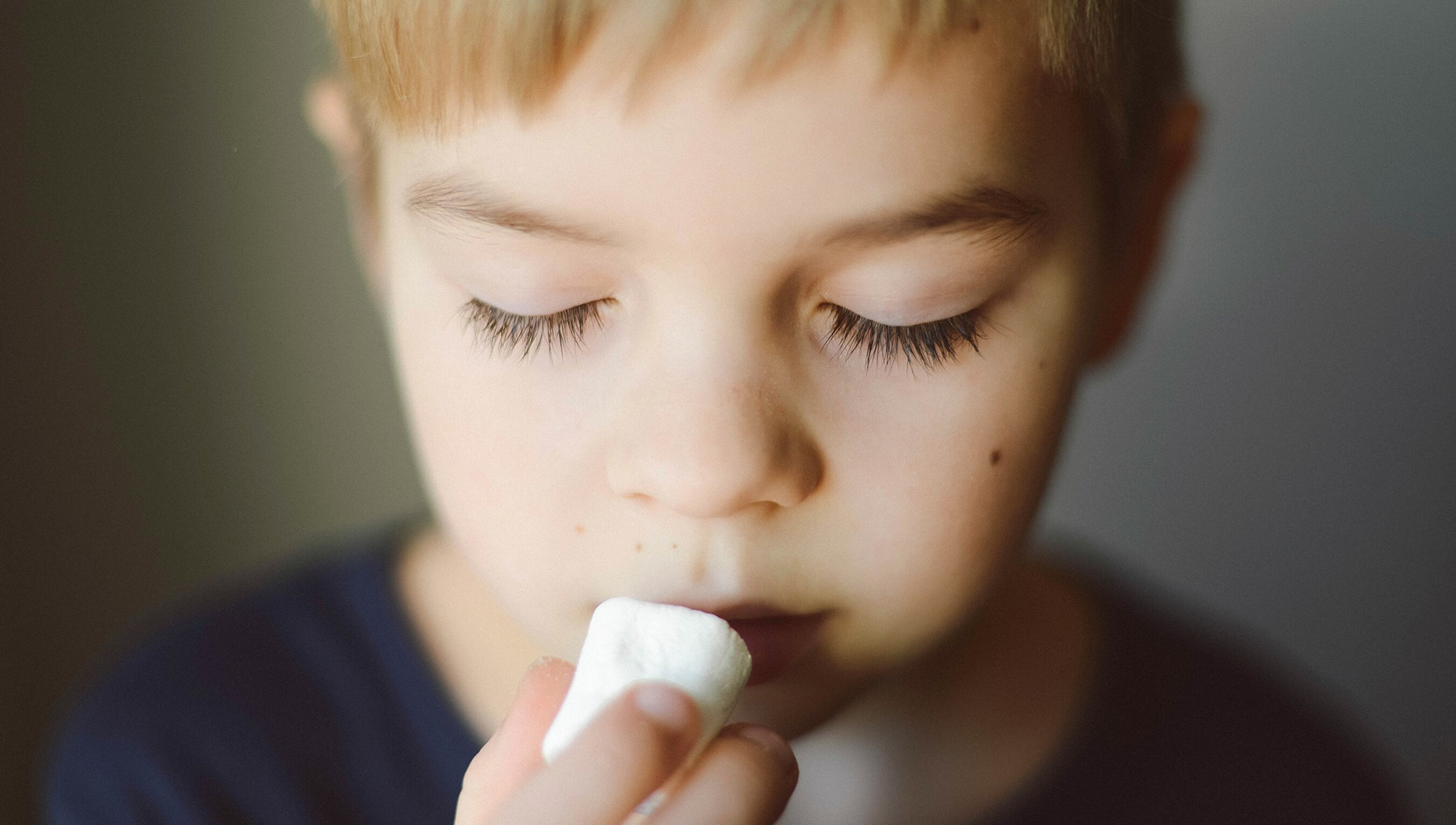 is a C J Martin Fellow in the Department of Psychology at Harvard University and the University of Sydney School of Psychology and Brain and Mind Centre. His research focuses on the psychology of imagination, foresight, and decision-making. He is currently working on his first book, 'The Invention of Tomorrow', with Thomas Suddendorf and Jonathan Redshaw.

In his Confessions, Saint Augustine declared he’d been ‘supremely wretched’ in his youth – an immoral and impulsive sinner. Turning to help from the heavens, he prayed to God: ‘Grant me chastity and continence, but not yet.’

Augustine’s prayer to delay the onset of good behaviour captures the familiar bartering of human willpower – the diet can always start tomorrow; I’ll skip the flossing, but just for tonight. The prayer also captures a frequently overlooked characteristic of self-control. Augustine anticipated that, once he buckled down, he’d be missing out. He used his far-reaching foresight to prioritise the present.

You might be inclined to think of foresight as the polar opposite of impulsivity. Surely, failures to delay gratification reflect poor planning – why else would we splash out on products we don’t need, drink too many cocktails before tomorrow morning’s meeting, or order that extra portion of fries in spite of our diet? A lack of long-term thinking must be the culprit; an inability to appreciate the delayed benefits of patience. This view of self-control as a battle between rash, short-sighted impulsivity and prudent, deliberate foresight has roots in ideas inherited from the ancient Greeks and has become a mainstay in the modern psychology of decision-making.

For instance, the International Society for Research on Impulsivity (an affiliate of the Switzerland-based World Psychiatric Association) defines a preference for smaller rewards available now over larger, but later rewards as a form of impulsivity that involves a ‘lack of planning and lack of regard for future consequences’. Countless academic articles and self-help books sing to the same tune – characterising immediate gratification as a short-sighted hitch while praising the virtues of long-term thinking as a means for overcoming temptation. Many people have heard of the marshmallow tests, where those children most willing to delay gratification for a second marshmallow did better in various domains in life, such as careers and health, when followed up even decades later. To the farsighted go the spoils, or so we’re frequently told.

Yet, for all its intuitive appeal, this story rests on what I think is a false dichotomy between foresight and impulsivity. The fact that people can use their foresight to prioritise the present reveals that many behaviours that seem like failures of willpower are not caused by a disinclination to plan ahead at all. Rather, many supposedly ‘impulsive’ behaviours actually arise from our capacity for long-term thinking. This calls for a rewrite of the conventional story of self-control.

Consider how your decision-making can be influenced by the motivation to avoid future regrets about missing out. The behavioural economist Ran Kivetz and his colleagues have shown this kind of ‘farsighted impulsivity’ in action: to avoid future regret at missing out, consumers will intentionally shirk their savings to splurge on an exciting vacation, gourmet dinner-for-two, or fancy box of Swiss chocolate truffles. Just like Augustine, they’re consciously choosing to prioritise immediate pleasure.

Pre-committing to indulgence forces us to have a little fun

What’s more, Kivetz and his colleagues found that people will even opt to bind themselves to a hedonistic choice – what Kivetz calls a ‘pre-commitment’ to indulgence (a wry adoption of a term more often used in the context of people pre-committing themselves to healthy or productive choices). For instance, when offered the chance to win prizes, his research participants frequently chose to take their winnings in the form of gift vouchers for luxuries such as spa treatments, instead of cash rewards of equal or even greater value. When participants were prompted to anticipate how they would use each of the two available rewards (vouchers vs cash), they were even more inclined to lock in the luxury.

On the face of it, this behaviour doesn’t make rational sense. Wouldn’t it be more obviously advantageous to enjoy the flexibility of the cash? You could always buy the luxury spa package anyway, and keep the change for a coffee on the way home!

But this decision-making quirk does make sense when you dig deeper. People foresee their own reliable tendency to spend money on boring but necessary essentials, such as toothpaste or electricity bills. Pre-committing to indulgence forces us to have a little fun. In my view, it seriously misses the mark to call such decisions ‘short-sighted’ or ‘impulsive’ just because they happen to prioritise pleasure over longer-term objectives. These choices of pleasure-over-practicality would not occur without some sophisticated deliberation about the future.

These and other peculiar quirks of decision-making arise due to foresight operating alongside another complex human ability, metacognition – your ability to reflect on your own thinking – which can lead to a funhouse of convoluted decision-making. We humans don’t only have emotions or desires that drive us. We reflect on our emotions, wish that they were different than they are now, realise that they are going to change in the future, regret them changing when they do (as we expected they would), and try to work around them in the pursuit of both our immediate and delayed goals.

According to the political theorist and philosopher Jon Elster, our farsighted awareness of how our emotions will change in the future isn’t just a matter for individual choices, it has also played a significant role in historical affairs. For instance, Elster argues that, in the aftermath of the Second World War, the Belgians realised that, with the passage of time, their courts would treat crimes of collaboration with the Germans more leniently. Waiting would allow cooler heads to prevail, leading to less extreme sentences, arguably focused more on justice than revenge. But, foreseeing this change in sentiment, Belgian officials were keen to hold trials as soon as possible, to make sure that passionate feelings of vengeance could influence proceedings.

In this case, as in the examples of consumer decision-making, people used their foresight to anticipate their own emotional vicissitudes and put the priority back on the present – ensuring the fulfilment of immediate drives.

Wilfully prioritising the present is not only an emotional matter. An entirely dispassionate evaluation of the future can also encourage us to focus on present rewards and opportunities. Imagine you’re faced with a choice between some immediate temptation and a larger but delayed payoff: would you rather have $50 now, or $80 that you must wait six months to receive? If you live in a highly uncertain environment or one where people tend not to keep their promises, a farsighted view of this bargain might well lead you to the following conclusion: get what you can now.

This reasoning sheds light on why people living in poverty tend to favour smaller yet more immediate rewards. It also helps to explain why people inhabiting harsher environments with lower life expectancies, a history of exposure to hardships, such as violence, or less trust in their community, might be less willing to wait for delayed outcomes. It’s not that these people are incapable of thinking ahead. Rather, it makes little sense to delay gratification for a reward you can plainly foresee is unlikely (or that you realise you won’t be around to enjoy). In a version of the marshmallow test led by the developmental psychologist Celeste Kidd, an experimenter broke a promise to children, aged three to five years, before the test began. Afterwards, the time that the kids were willing to wait for the second treat was slashed by around 75 per cent. So even young children will take background information into account when forming expectations about whether patience will or won’t pay off.

The various examples I’ve shared show how misguided it is to assume that enhancing foresight will necessarily encourage people to delay gratification – in many cases, thinking ahead will incite the exact opposite tendency. Similar arguments have been made by leading behavioural economists, such as George Loewenstein. In response to a recent paper led by a team of psychologists at the University of Pennsylvania that extolled the virtues of delayed gratification, Loewenstein was quick to point out that ‘﻿self-control can and does also often involve conscious, deliberate attempts to become more present-minded’. This line of thinking also squares with research in ecology, where scholars studying animal behaviour have long appreciated that, in uncertain and risky environments, rational decision-making will encourage animals to exploit immediate opportunities.

This all raises some difficult questions for those attached to the idea that self-control comes down to a tussle between short-term gratification and long-term planning.

It’s no longer tenable for academics, pundits or self-help gurus to reflexively call it a ‘failure’ when people opt not to delay gratification. That label will often be completely misleading, such as when a person wilfully and knowingly chooses immediate rewards because they don’t trust the promise of a delayed payoff. Indeed, characterising the prioritisation of the present as a ‘failure’ reflects an unhelpful moralisation that will hamper psychologists, economists, managers, policymakers and others who seek to understand human decision-making. This goal will be achieved only by grappling with the actual reasons for human decisions, not by adopting prescriptive moulds that say how people are supposed to act.

In turn, we should all try to be slower to judge one another’s choices as short-sighted or impulsive failures, given how much of the wider picture will often be hidden from view. It makes little sense to label a decision as a failure unless you know more about both what a person aims to achieve, and the broader context in which they’re making their choices.