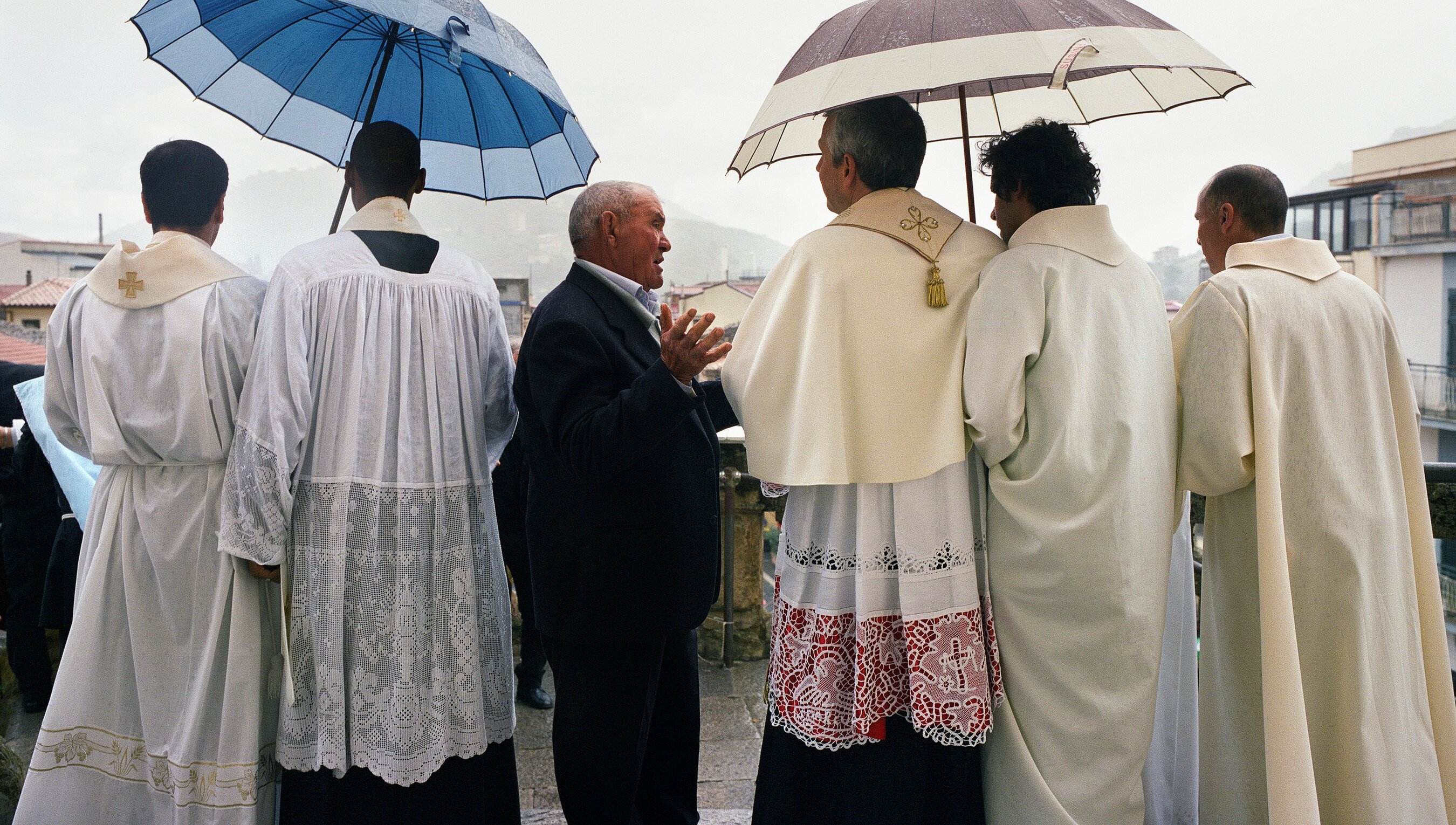 A local parishioner speaks with the priests at the end of an Easter procession, complaining about a change to the route due to the rain. Photo by Alfredo D’Amato/Panos Pictures

Rise up fellow complainers, let’s be vulnerable together

A local parishioner speaks with the priests at the end of an Easter procession, complaining about a change to the route due to the rain. Photo by Alfredo D’Amato/Panos Pictures

is a professor of philosophy at Trent University in Peterborough, Ontario, and the Kenneth Mark Drain Chair in Ethics, as well as affiliated faculty in Gender and Women’s Studies. She is the co-founder and co-editor of the journal Feminist Philosophy Quarterly, and her books include Forgiveness from a ​​Feminist Perspective (2nd ed, 2018) and the edited collection The Moral Psychology of Forgiveness (2017).

If you turn to great works in moral philosophy to find out when complaining is permissible, you’ll get a ‘never’. Complaining is not recommended by philosophers. Many defend political protest, and some defend the ‘constructive complaining’ that contributes to making the world better, but ordinary griping about subjective pains should never be done. It doesn’t change anything, or so the argument goes.

I disagree with most philosophers (although I’m not alone), and I defend the form of complaining that’s not seen as productive. I suspect that our reports of our pains can be more socially beneficial, even more morally generous, than naysayers think. Of course, not all complaints are equal and not all contexts are great. Complaining well is a complex skill, to be exercised more than never and less than excessively.

When I said this in an interview, the host described people who reply to the most casual ‘How are you?’ with a catalogue of their pains as ‘a menace’. I had to laugh. Complaining can be thoughtless, and it can be unwelcome. But complaining can also be thoughtful. At times it’s so useful to a situation that I describe it as an affective duty. That means that there are times when we ought to be sensitive and attuned to the emotional environment and offer a complaint as a way of offering an opportunity for solidarity. You ought not to act as if no one has anything in common with you and, instead, you ought to extend your vulnerability and say: ‘Let us share it.’

To observe the duty to complain, we need skills of complaining well. And to do any skill excellently, we need to practise, so that we know what occasions call for complaining. Such occasions include times when you think you could help someone else and invite them to complain because you think they need to. My journal article ‘Can’t Complain’ (2018) includes the example of two coworkers plodding from opposite directions in a cold rain. They step inside, shivering, and one says: ‘Awful weather we’re having!’ The point is to open that interpersonal door so that the other person feels free to complain. It is friendly but, more importantly, it’s a recognition that someone might need to disclose that they’re uncomfortable or vulnerable, if only to the weather. Some might refrain from complaining merely because they’re polite, but they might also refrain because they don’t think you’ll agree. Offering the opening complaint is a way of indicating that you’ll agree. It’s prosocial.

If you complain and no one affirms you, you’ll feel worse

This affective duty can also be towards oneself – a duty to complain so that we’re not misrepresenting ourselves. We don’t associate quotidian gripes with authenticity, but letting people know that you’re not perfect, that you, too, suffer from some things that others might be suffering from, can indicate a healthy self-awareness. In complaining well, we’re both honest about who we are and helpful to other people who might need to know that they’re not alone. It might take personal courage to admit that one is in pain or vulnerable, but it’s important to our own wellbeing to find that we’re not alone.

Of course, complaining excessively or inaptly risks making others worse off instead of binding us together. Everyone knows someone who complains too much. And because we all know someone who complains too much, it seems obvious that complaining to excess is bad. It can effect a kind of mood contagion where your complaint brings other people down rather than allowing them to help you. And in some roles, people depend on us to be the recipients of complaining and to not return the feelings in kind. So the good life requires complaining to the right people, in the right amounts, for the right reasons.

That sounds like I’m saying complaining is a virtue but, at best, it’s what the philosopher Lisa Tessman called a ‘burdened virtue’. In an ideal society, you wouldn’t have to complain much because there wouldn’t be much to complain about – we’d all be healthy, happy and well-supported. Instead of being a virtue, complaining is more like the skill of people who are really successful at sociality, who know when to share themselves, when to help others, and when to contribute to a relationship.

It is, by nature, risky. Psychological research suggests that if you complain and someone confirms your complaint – not agrees with you, just acknowledges (‘That sounds hard; you sound like you’re suffering’) – then that affirmation lifts your mood higher than it was before you complained. But if someone doesn’t affirm you, your mood is lower than ever. It’s bad news that, if you complain and no one affirms you, you’ll feel worse. But it reveals the times when complaining is better – that is, when you have reason to believe that there’s an opportunity for someone to affirm you.

Complaining helps ameliorate isolation and helps people bond. It reduces our loneliness and reveals us to each other in a way that can build relationships. I worry that social structures and workplaces are often set up to isolate us. I worry about students of mine who go into service professions and jobs with high risk of burnout ceasing to care about other people. Employers can’t help but prefer that we’re without complaints. Better that we show up every day, never miss work, and never give in to our feelings when we’re caring for the vulnerable or trying to sell something or trying to conduct business. But I think the fact that our workplaces tend toward, intentionally or not, exploiting and isolating workers is all the more reason to make a space for telling each other that sometimes it’s important to complain – not just to make the workplace better, but to build relationships in workplaces where we can trust each other to understand when we’re having a bad day.

If someone apologises for complaining, they’re saying, implicitly, that their listener shouldn’t complain in turn

All the topics I write on ultimately return to the same fact: we live in a nonideal world. It would be hard to describe many people as so powerful that they have nothing to complain about. Most people are simply in differently constrained positions and, when they share similar positions, complaining gets them together – not to make the world a better place, but to help each other bear up under it better.

That’s the job of ethics, the job of life – to be happy anyway because we have robust capacities for happiness. We just have to figure out how to exercise them in a nonideal world. The ‘Like’ button on social media platforms took off in part for this reason, that we are so unconsciously searching for affirmation, so naturally hungry for it. And the more we work remotely, or precariously, the more we commute, or see no one at all, the less chance we have to get affirmation of how we feel.

I would be remiss not to note that there are ways to complain badly, even when turning to people as friends whom you think you can trust with a complaint. One mistake is to include an apology for complaining in every complaint. At moments when you need to contribute to your relationship or disclose your pain, routinely apologising for complaining is not skilful. Doing so implies that we all agree that complaining is bad. But if someone apologises for complaining, they’re saying, implicitly, that their listener shouldn’t complain in turn. That’s going to continue to maintain a culture that says none of us should be complaining. I worry for people I know who start complaints on social media with the statement that they know other people are worse off, but… I want to encourage people to recognise that no one’s life is free of suffering. No one is untouched by trouble, and therefore everybody gets to complain a little. We should help each other be vulnerable together. We’re stronger together, even when we feel like we’re not strong.

Skilled affirmation takes practice. This means developing a friendship on purpose, where you say: ‘I believe that you are someone I can trust and to whom I can occasionally complain.’ We tend not to think of developing friendships as a practice. But, as Aristotle says, friendships are like good habits: they bear cultivating. For example, social media helped me deliberately enter some small, close-friend networks where we agree to check in with each other regularly, ask each other how we’re doing, and give each other honest answers.

I know social media doesn’t always seem to encourage that because so much of it is pictorial. What it encourages is putting up the best possible photos of yourself, your family, and your dog. But we need this other thing, too – and we’re bad at it, so we ought to practise it all the more. So consider some skill-building homework: find a trusty person and tell them explicitly: ‘I want you to hear a complaint of mine and just let me know if you share it.’ Build that trust network, one person at a time, and try to start complaining excellently.