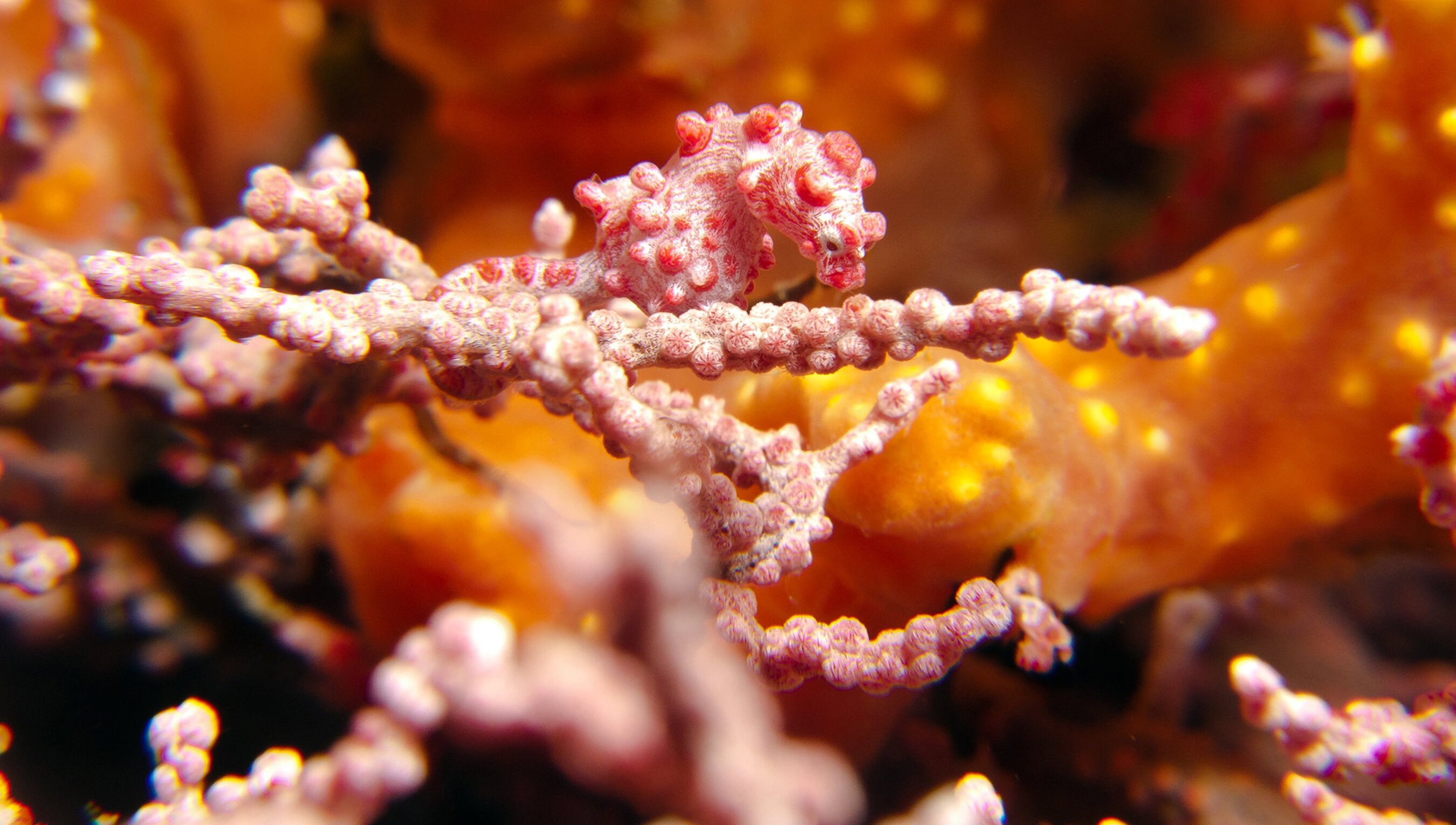 Sex lives of the pygmy seahorses – a hidden, miniature marvel

is an underwater photographer, author, marine conservationist and member of the IUCN Seahorse, Pipefish and Seadragon Specialist Group. His latest book is The World Beneath: The Life and Times of Unknown Sea Creatures and Coral Reefs (2019). He is based in the UK.

On a remote reef in Sulawesi, Indonesia, tiny male seahorses compete with each other. Their daily fights take place on the surface of a pink coral 12 metres below the ocean’s surface, and I have spent months watching them. Diving alongside their coral home, I often become so captivated by their rituals (and so focused on recording my observations) that I forget each seahorse is little bigger than a grain of rice. Scale seems irrelevant when you watch pygmy seahorses attempting to strangle each other.

Those who haven’t given much thought to the relationships of fishes, including seahorses, might be forgiven for expecting impassive behaviours and cold emotionless stares – especially when those fish are measured in millimetres. But during the many months I spent observing the mating rituals of pygmy seahorses, I learned that, despite their size, these animals live rich, dramatic lives that you might expect to find in a telenovela, rather than a scientific journal. And the complex lives of these little beings challenge the human scales we use to frame family, kinship and sexuality.

In 1969, the first pygmy seahorse species, known as Bargibant’s pygmy seahorse, was happened upon by a researcher at the Nouméa Aquarium in New Caledonia. It wasn’t found on the island’s coral reefs, but instead on a large, purple Muricella gorgonian seafan taken for the aquarium’s collection. Peering closely at the surface of the coral, the researcher found a pair of 25 mm-long seahorses clinging to its surface. Their colour and surface texture almost perfectly mimicked the closed polyps of the coral, explaining why they hadn’t been spotted before.

Today, pygmy seahorses still aren’t as well known as their larger seahorse cousins. Only eight species have been discovered so far (seven since the turn of the millennium) with the smallest species reaching 14 mm and the largest 27 mm. In the mid-2000s, I began investigating their social and reproductive interactions in my doctoral research – certain aspects of their biology suggested to me that they may differ from their larger cousins in more than just size. This was the first study of specific pygmy seahorse biology and behaviour, beyond the naming of the species, and took me to remote locations around the Coral Triangle. It was during this fieldwork that I first began to understand the elaborate lives of these diminutive fishes.

Through daily courtship rituals, bonded pairs of male and female seahorses can synchronise their reproductive cycles

For my doctoral research, I studied Bargibant’s and another species that lives on gorgonian seafans, Denise’s pygmy seahorse, which was first described in 2003, and is smaller and more slender than Bargibant’s. Both are found throughout the Coral Triangle region that spans much of Southeast Asia, with their range also extending into the Pacific ocean. While diving at sites across this region, I found that Bargibant’s lives only on Muricella seafan species, while Denise’s lives on 10 different genera of gorgonians, some as large as a car’s windshield. I also discovered that pygmy seahorses spend their entire adult lives clinging to the surface of a single gorgonian coral.

These tiny fishes live and reproduce on the surfaces of their submerged gorgonian worlds. It was their reproduction that particularly interested me. Seahorses have become well known for their monogamous relationships and for the way that males brood eggs in a specialised pouch on the underside of their body. Through daily courtship rituals, bonded pairs of male and female seahorses can synchronise their reproductive cycles. By communicating through these elaborate dances, a female will know when to prepare a clutch of eggs to coincide with the male as he prepares his brood pouch. When they’re both ready, the pair will rise through the water column, and the female will pass her unfertilised eggs into the male’s pouch. He fertilises the eggs as they enter the pouch, and it is this quirk of their reproductive cycle that has resulted in another: due to the eggs entering the male’s reproductive system unfertilised and him subsequently fertilising them, he can be certain that each offspring is his. This is extremely rare in the animal kingdom. As a result, males have evolved to take better care of the developing offspring than perhaps any other male in the animal kingdom, due to the assurance of paternity. This was the behaviour I expected to see, repeated on a miniature scale.

Until the 21st century, pygmies had never been the subject of any focused research for several reasons: their relatively recent discovery, the extreme difficulty of maintaining them in captivity, as well as their excellent camouflage, rarity and tiny size. They’re hard little fellows to spot. Luckily, the pygmy seahorses I observed were living in small, discrete groups on the surface of a single gorgonian seafan, so once I had found a group, I could visit them as often as I needed. They live these relatively constrained lives because of their extreme camouflage, which allows them to perfectly blend in with their brightly coloured coral homes but would make them sitting ducks if they moved elsewhere.

While observing a group of three pygmies sharing a seafan, I wondered about other differences between larger and smaller seahorses. I began to wonder about pygmy sexuality. Larger species form enduring monogamous bonds, but did these pygmy groups represent something more sexually complicated?

She renamed them Tom, Dick, Harry and Josephine. Suddenly, everyone was engaged with their torrid tales

During hundreds of dives across the Coral Triangle, I recorded every detail of the reproductive and social lives of groups of Denise’s pygmy seahorses and visited certain groups for many weeks – or, in some cases, months. On one such dive, hovering down in a remote corner of Sulawesi, I discovered one particularly intriguing group clinging to a bright pink Annella gorgonian seafan under an overhang. There were four individuals in the group that, I discovered by taking extremely closeup photographs of their nether regions, comprised three males and a single female.

Over the coming months, I became engrossed in the lives of the quartet. Each day, in absolute awe of the sights that I had witnessed, I would regale the local divers with tales of the males strangling each other. With only their prehensile tails to show dominance (by throttling each other), the males were fairly limited in how their tussles might play out. When not using their tails, they would also ‘neck wrestle’ by trying to knock each other over, much like giraffes do. I rigorously recorded these observations, with each animal labelled with a numerical code, until one of the dive guides announced that she was fed up with this formality. She renamed them Tom, Dick, Harry and Josephine. Suddenly, everyone was engaged with their torrid tales.

As it happens, this group was a perfect model for understanding how reproduction within pygmy seahorse groups might work. There were three males and a single female in the group I was watching and, assuming one pair formed, two males would remain unmated. Observing these pairings wasn’t easy: taking closeup underwater images became vital for this work. I was able to capture images of Josephine as her body swelled with eggs, and again showing her reduced size after transferring her clutch to one of the males. Though they’re under 2 cm in length, they swell like tiny footballs as up to a dozen babies grow inside. Looking closely, I could make out postpartum males by their stretch marks.

As the weeks went by, I noticed that Josephine was producing a clutch of eggs every seven days. This corresponded with the two biggest males, Tom and Dick, becoming alternately pregnant every two weeks. After one of the males gave birth, he would immediately become pregnant again, and a week into his two-week pregnancy the other male would give birth and become pregnant again. It turns out that living in these small groups on such a rich habitat enabled Josephine to feed enough to produce more clutches than would be expected in their larger cousins. On the seafan, mating rituals and dances took place as a group, and these social displays allowed Josephine to synchronise her cycles with two males at a time. The third male, Harry, never did become pregnant. He was just 1.4 cm in length – much smaller than the other two. He was perhaps learning the ropes and biding his time until one of the others passed on, and a space became available to him.

Spending time with Tom, Dick, Harry and Josephine, as well as dozens of other tiny characters, has had a profound effect on how I think about life, and challenged my sense of scale (and sexuality). We tend to have a blanket disregard for some of Earth’s littlest creatures. They’re often labelled ‘bugs’ and understood as living less valuable lives than larger, more noticeably charismatic species. But life exists far beyond human scales and senses. Coral reefs are packed with similarly tiny and well-camouflaged beings. Not only are there huge numbers of these little species yet to be discovered, but each likely has its own fascinating stories and behaviours to share. In our rush to consider species that deserve our attention and care, we often forget those at the fringes of our sensory ken.

The time I spent filming the mating rituals and sex lives of seahorses in closeup taught me how difficult and necessary it is to expand our empathy and imagination to include the smaller denizens of our planet. Even now, tiny male seahorses, little bigger than a grain of rice, are strangling each other for the chance to become pregnant on a bright pink coral in a remote corner of the Pacific Ocean.

AnimalsNature and the environmentSex and sexuality
20 July 2022