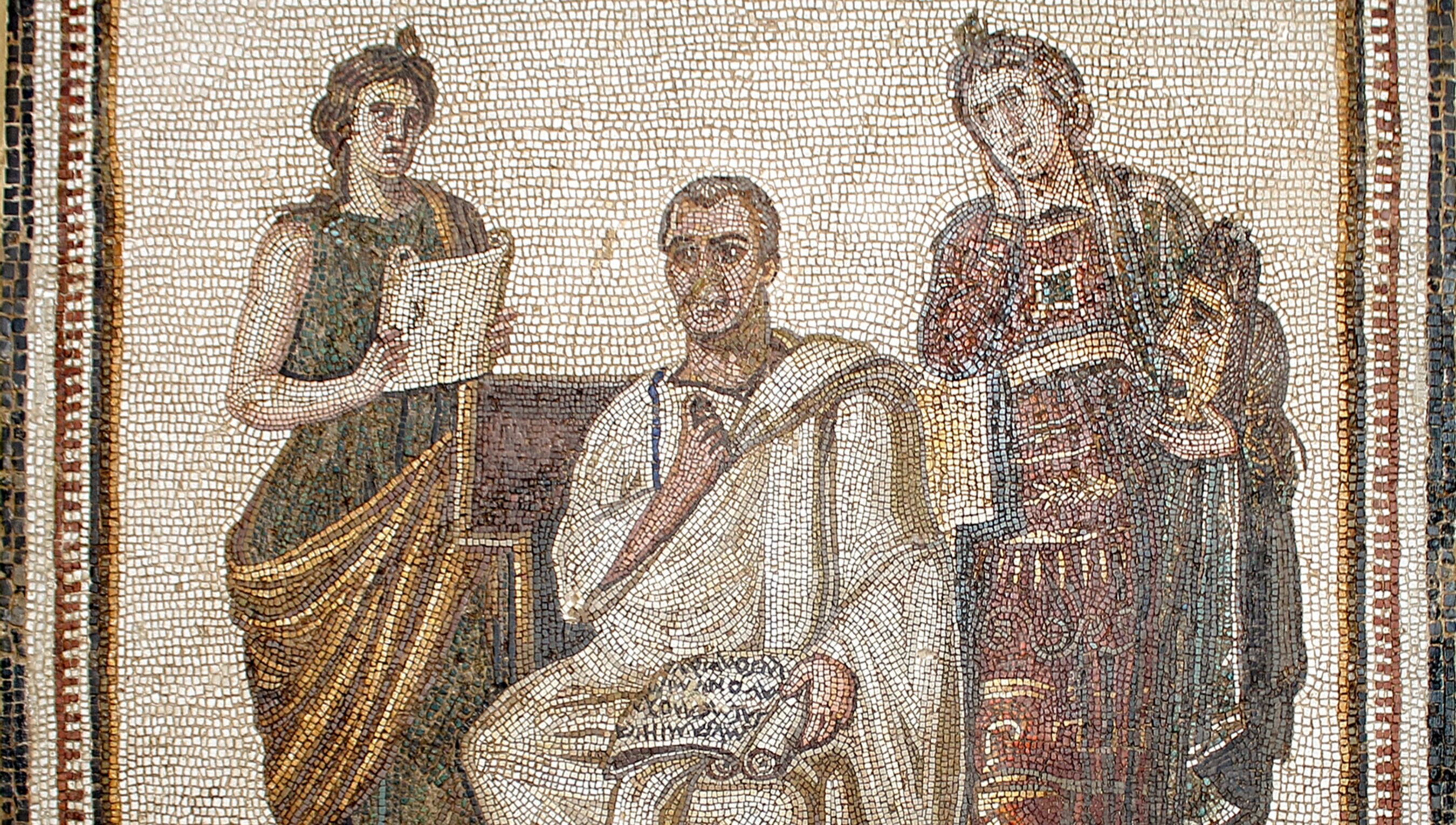 Mosaic at the Bardo Museum in Tunis, Tunisia. Courtesy Wikipedia

Speaking Latin brings an unmediated thrill to the Classics

Mosaic at the Bardo Museum in Tunis, Tunisia. Courtesy Wikipedia

is a professor of Classics and a fellow of Jesus College at the University of Oxford. His books include The Greeks and the New: Novelty in Ancient Greek Imagination and Experience (2011) and Music, Text, and Culture in Ancient Greece (2018), co-edited with Tom Phillips. His latest book is Socrates in Love: The Making of a Philosopher (2019).

Lingua Latina viva est. ‘The Latin language is alive.’ Most English-speakers reading the Latin phrase will have a ready understanding of the individual words (lingua, viva), and the simple sentence might even arouse a recognition that this is a language one can learn to speak as well as read. I was introduced to Latin at the age of seven by an inspiring schoolmaster called John Evans, who strode into the classroom, sketched a profile face on the blackboard, and declared: ‘Haec est puella. Amo puellam.’ I was elated to realise that I immediately and without instruction understood this to mean: ‘This is a girl. I love the girl.’ The change in form from puella to puellam struck me as no less obvious than the change in the English pronoun in ‘He is the teacher, I love him’ (Ille magister est, amo illum).

I was instantly hooked on Latin. But the idea that Latin could be a spoken language receded as, over the years that followed, I immersed myself in Latin grammar, syntax and vocabulary, and in translating literary and poetic works with pen and dictionary at hand. To me, Latin no longer meant ‘Amo puellam’ but Amo, amas, amat. I gradually imbibed a deep-seated prejudice about the idea that Latin could or should be spoken as a living language. How could one imagine that a supposedly ‘dead’ language, which had evolved into living French, Italian, Span­ish, Romanian and Portuguese, might be used for oral communication? How should one pronounce the cae- in caelum (sky): kai, as it was in Rome of the 1st century BCE, or che, as used in Christian liturgy and modern Italian? Should one adopt the style of Cicero or Seneca, the colloquialisms of Catullus or Petronius, or would one have to be resigned to a neo-Latin mixture?

As a professor of Classics at the University of Oxford, I had quite forgotten the thrill of understanding spoken Latin when, in 2016, a group of students from the Accademia Vivarium, an institution based in the beautiful Villa Falconieri just outside Rome, paid a visit to the UK with their professor Luigi Miraglia. Among them were students of Dutch, Hungarian, Finnish and South American origin; but one could hardly tell their nationalities apart because, in addition to using Latin names (Julianus, Edmundus), they spoke in fluent and elegant Latin and in one case, Attic Greek.

While I marvelled that I could under­stand every word they said, I felt embarrassed that I could not, desp­ite more than 50 years of reading, studying and writing the language, summon to my lips sufficient Latin to be able to converse with them fluently. The meeting removed, however, any concerns I had about sound and style in speaking Latin actively. Differences of pronunciation and expression mattered as little as if I were conversing in English with students from Scotland, Germany or Japan. What mattered was that the language was intelligible, meaningful, accurate and alive.

Latin was spoken across Rome’s vast area of influ­ence by people of every level of class, education and ability

This should not, perhaps, have come as a surprise. Latin was spoken in a huge variety of ways (as varied as were its descendants) across Rome’s vast area of influ­ence for more than a millennium, and for centuries afterwards, by people of every level of class, education and ability. Despite significant local and individual differ­enc­es, it remained the lingua franca, the common language, of Europe for cent­uries. Dante (1265-1321) began composing his Divine Comedy in Latin before opting to write in vernacular Italian; Petrarch and Boccaccio (14th century) wrote equally fluently in Latin and Italian, and 15th-century poets and Humanists such as Poliziano and Ficino, and Erasmus of Rotterdam, were equally at home speaking Latin as their native tongues.

In the 16th century, the Scot George Buchanan composed prose and verse masterpieces in Latin; meanwhile, the essayist Michel de Montaigne, though he wrote his Essais in French, developed his style through being taught to speak Latin by tutors hired to converse with him only in that language from infancy:

They never addressed me in any other tongue but Latin … And so, without art, without books, without grammar, without rules, without whips and without tears, I learned a Latin as pure as that which my schoolteacher knew …

The philosopher John Locke (1632-1704) recommended that the best course for learning Latin was to do so actively, since

Latin is no more unknown to a child, when he comes into the world, than English: and yet he learns English without master, rule, or grammar; and so might he Latin too, as Tully [Cicero] did, if he had somebody always to talk to him in this language.

John Milton (1608-74), whose poetic works include some beautiful poems in Latin, had similarly expressed distaste about the way Latin was standardly taught in schools and universities:

forcing the empty wits of children to compose themes, verses and orations, which are the acts of ripest judgment and the final work of a head filled by long reading and observing, with elegant maxims and copious invention. These are not matters to be wrung from poor striplings, like blood out of the nose, or the plucking of untimely fruit. Besides the ill habit which they get of wretched barbarising against the Latin and Greek idiom, with their untutored Anglicisms, odious to be read …

Odi et amo, begins the epigram of the Roman poet Catullus, ‘I hate and I love.’ When I present that couplet to young non-Latinists, their eyes light up as they eagerly volunteer the meaning of virtually every word whose roots underlie words familiar to them from English (‘odious’), French (‘et’) or Spanish (‘amor’). Whether odious or elegant, Latin continued to be used for formal purposes, even in parts of the world far from Europe. In 1689, Russia and China signed the Treaty of Nerchinsk to regulate a border conflict: Tractatus pacis de Nipkoa was composed in Latin by three European scholars attached to the different parties to the dispute.

Scholars have compiled Latin neologisms for things and concepts unknown to ancient speakers – aerinavis for ‘airplane’, tromocrates for ‘terrorist’, caffea for ‘coffee’

By the mid-19th century, however, the increasing dominance of national languages over Latin was causing alarm to some readers. The German philosopher Arthur Schop­en­hauer lamented:

The abolition of Latin as the universal language of scholars and the introduction of the petty provinc­ialism of national literatures have been a positive misfortune for the stock of human knowledge … Latin authors are quoted in a German translation. Good heavens! … we dare not place any reliance whatever on their accuracy … Latin discloses to us not only Roman antiquity, but also directly the whole of the Middle Ages … down to the middle of the 18th century … I am in direct contact with them and can really make their acquaintance.

The growth of translations hastened the demise of students’ ability to understand Latin in an unmed­iated way, and cemented the more mechanical and unimaginative styles of teaching ancient languages; but Latin continued to be actively spoken, if only by small numbers of people in scattered areas. It remained the official language of the Vatican until 2014, and in recent decades has been perpetuated by enthus­iasts such as the aforementioned Accademia Vivarium in Rome and the Latin radio station Nuntii Latini (‘News in Latin’), which was broadcast from Finland for three decades from 1989 until the service was closed in 2019; but the notion of teaching Latin actively was virtually lost to institutions of learning at all levels.

The situation is beginning to change again. Following the example of other institutions that teach Classics (including Cornell University in New York), the University of Oxford, one of the main centres of classical study in the world with around 500 students at any one time studying aspects of antiquity, has initiated a project to teach Latin and Greek actively. Since most Classics students are required to know some Latin if not Greek, the aim of the Oxford Latinitas Project is to enhance the teaching and learning of the ancient languages for begin­ners, intermediate and advanced stud­ents through active speaking and discussion. The aim is not to achieve conversational fluency, and the use of the term ‘active’ rather than ‘spoken’ recognises that opportunities to converse in ancient lang­uages are limited and likely to feel contrived. Although scholars have compiled lists of Latin neologisms for things and concepts unknown to ancient speakers – aerinavis for ‘airplane’, tromocrates for ‘terrorist’, caffea for ‘coffee’ – the goal of learning to think in Latin is that it allows, as Schopenhauer asserted, unmed­iated familiarity with great ancient texts and ways of thinking.

Teaching Latin actively, as Locke and Milton recognised, provides students with a relatively fast, enjoyable and effective route to acquiring reading and compreh­ension skills. In 2017, the Latinist John Bracey at the University of Massachusetts, Amherst wrote in the journal Eidolon:

the default approach to teaching Latin has been the grammar-translation approach, [which] … takes a language that was once spoken comfort­ably by people of all backgrounds, social classes, ages, etc throughout the world and renders it into a complex linguistic jigsaw puzzle that requires an elite mathematical mind to decipher … using a comprehension-based approach, with no direct grammar instruction, all of my 7th-grade students were able to read novice-level chapter books in Latin by the end of the year.

Montaigne, Locke and Milton were definitely on to something. Latina lingua viva est: vivat et floreat.