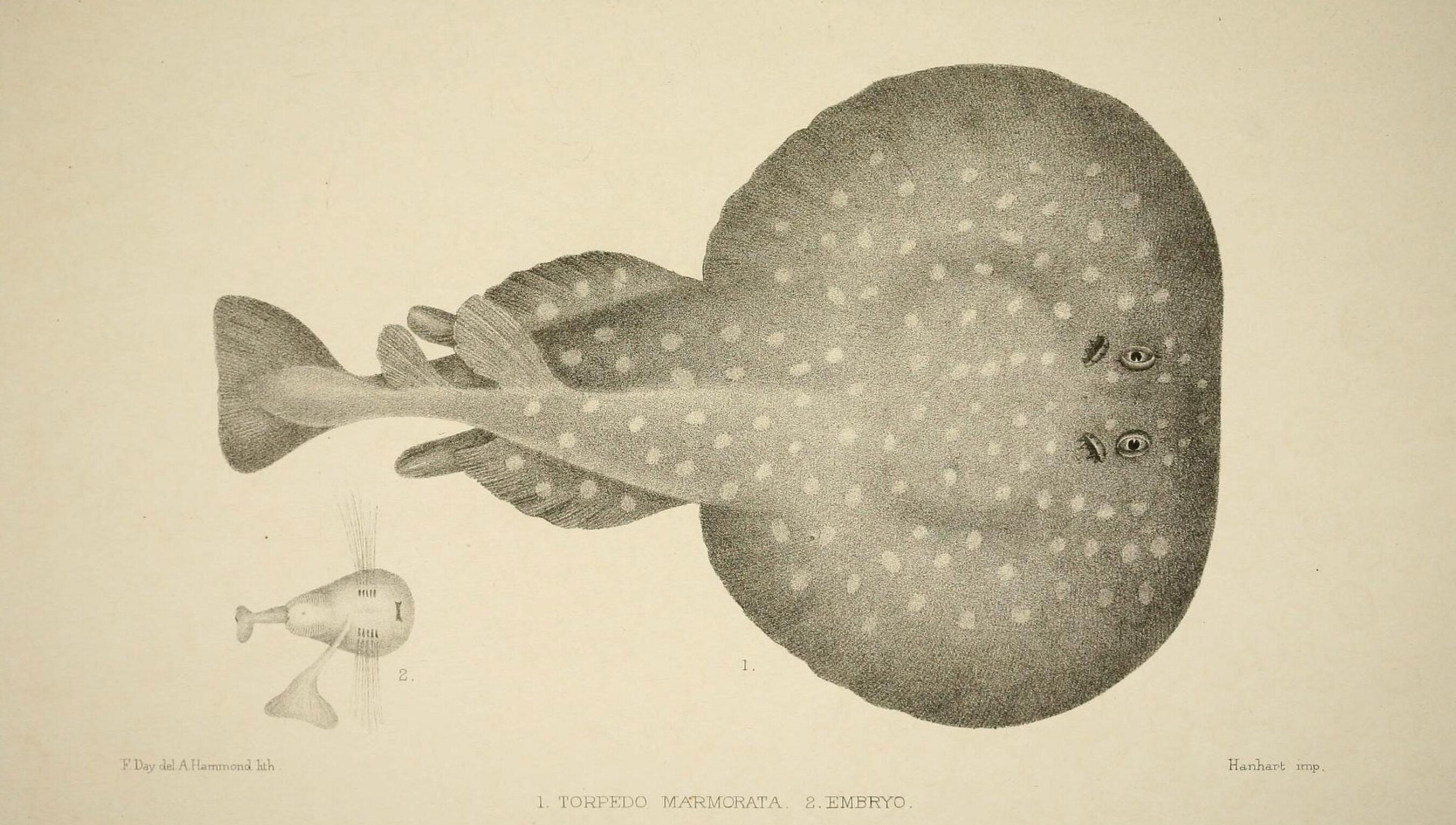 These are truly exciting times for the science of brain zapping

The marbled electric ray (Torpedo marmorata) was reported in 64 BCE to be a suitable treatment for headaches. Photo courtesy the Biodiversity Heritage Library

is a research fellow at the University of Queensland. Her research investigates frontal lobe function, brain training, ageing, consciousness and attention, using a variety of techniques, with a particular emphasis on noninvasive brain stimulation, as well as imaging approaches and behavioural tasks.

The ability to alter brain function with small currents of electricity has caused great excitement in recent years, in scientific communities and the general population alike. You might have seen headlines in the popular media – such as ‘Is Brain Stimulation The Key To Athletic Performance?’, ‘Zapping The Brain Improves Creativity’ and ‘DIY Neuroscientists Use Direct-Current Devices To Shock Their Way To Happiness’ – and wondered whether there was any truth to the claims.

Electrical stimulation is a real medical intervention and it’s far from new. Way back in 46 CE, the Roman physician Scribonius Largus reported the potential of a bioelectrical fish to treat headaches. These days, scientists use a technique called transcranial electrical stimulation (tES) – including the most common variant, transcranial direct current stimulation (tDCS) – to noninvasively and painlessly run a small electrical current (approximately 1-2 mA) across the brain, via nothing more complicated than two scalp electrodes attached to a battery. Although the effects of this kind of brain stimulation aren’t fully understood, we do know that it can modulate how easy it is for brain cells to function (by increasing or decreasing their ‘excitability’, depending on the precise stimulation parameters).

Contemporary researchers are interested in tES as a medical treatment and as a way to enhance normal cognition. One application is in ‘minimally conscious’ brain-damaged patients. Electrical current applied to an area of the brain known as the frontal cortex can improve their responsiveness. Stimulation of this frontal brain area also improves depression symptoms, whether paired with cognitive behavioural therapy or delivered on its own. Researchers have also begun to apply stimulation to problems associated with age-related declines in cognitive performance. For example, a form of rhythmic electrical stimulation was found to improve older adults’ working memory to the extent that their performance was comparable with younger adults who didn’t receive the stimulation. I’ve also studied the potential of electrical brain stimulation myself, and have found that it can improve the benefits of cognitive training in younger adults and boost multitasking performance.

We don’t know how stimulation modulates the brain, but it doesn’t render the technique useless

All of these applications, and many more that I haven’t mentioned, show the promise that stimulation holds in clinical and nonclinical settings – in other words, there’s genuine justification for some of the media excitement. What’s more, scientists are also using the technique to understand more about brain function, for instance to investigate which parts of the brain do what. Added to this, the equipment involved in tES is relatively cheap and easy to use, and the side-effects are minimal (the most common is a slight reddening of the skin that fades within minutes). It’s little surprise that a growing DIY community has emerged – people stimulating their own brains at home, either with commercially available stimulators, such as the foc.us headset, or using homemade options.

You might be thinking that all these potential benefits of electrical brain stimulation sound too good to be true. There are certainly valid reasons not to get too carried away. To date, the field has endured heavy and sustained criticism, predominantly from scientists concerned by poor scientific practices and the potential that findings are being oversold, both when reported in the media, and when presented in scientific and medical contexts.

Specifically, critics have argued that we don’t know how stimulation modulates the brain – if we can’t understand the mechanism(s), then how can we really know what’s going on or ensure optimal results? Others have highlighted that not everyone responds in the same way to brain stimulation, with some people responding well (showing the desired effect), but others showing either no changes, or even changes in the opposite direction. More generally, critics have accused the field of poor research methodology, and they’ve questioned the reliability of controlled trials in which volunteers aren’t told whether they’re receiving true electrical stimulation or a placebo ‘sham’ version.

In fairness to these critics, the breadth of mental processes and behaviours for which stimulation has been argued to have an effect is quite staggering, including creativity, appetite, multitasking, memory, mind wandering, attention, motoric processes, sensory processing and theory of mind, to name but a few. I can see why this seems too good to be true. To quote one sceptical paper: ‘This may be a good time to remember Carl Sagan’s warning that “Extraordinary claims require extraordinary evidence.”’ Although there is some evidence of the benefits of tES, it’s true that they are frequently overstated, especially by the time that they are reported in the media. For example, a headline such as ‘Zaps Bring Brain-Dead People Back To Life For A Week’, in the Daily Mail, oversells the findings and risks giving false hope to families. In reality, many effects reported in the academic literature are, at best, preliminary and in need of confirmation.

Yet it’s important to keep these criticisms in perspective. Many medical and scientific techniques are applied before they’re fully understood. For instance, it’s still an open question how anaesthetic renders patients unconscious, yet it’s an accepted and critical component of surgical medicine. The lack of understanding as to how electrical stimulation modulates the brain is a limitation, but it doesn’t render the technique useless. In fact, I’d argue it makes research into stimulation, and specifically its neurophysiological consequences, more important.

There’s also reason for optimism in the field. Stimulation is increasingly being used in combination with brain imaging, to look at the effects of tES on different cortical areas. Other studies are looking into the factors, such as optimal dosages, that might help us predict who will respond well to stimulation.

Most importantly, the standard of research in the field is improving. We’ve come a long way from using bioelectric fish to ‘cure’ headaches. Many new fields in science go through an initial phase of work where some possibilities are explored, and then it takes time for best practice to be developed and upheld. The area of electrical stimulation is now at the phase where best practice is being established, and the standard of published work is increasing, including the use of better control conditions and larger sample sizes. Also, more study designs are being registered in advance (an important feature of open science), which increases trust in findings, and more researchers are working to replicate their own and others’ findings, which will help sort out the genuine effects of stimulation from those that aren’t robust.

Electrical brain stimulation is unlikely to be a panacea that cures all manner of ills and turns us into super performers. I also believe it’s a little early for self-treatment and experimentation with tES at home. Yet this is an exciting time in brain stimulation research, and the science is moving rapidly. I predict that within a few years we will have substantially increased our understanding both of how electrical stimulation affects the brain, and how this can be utilised best by patients and the general public. Watch this space!