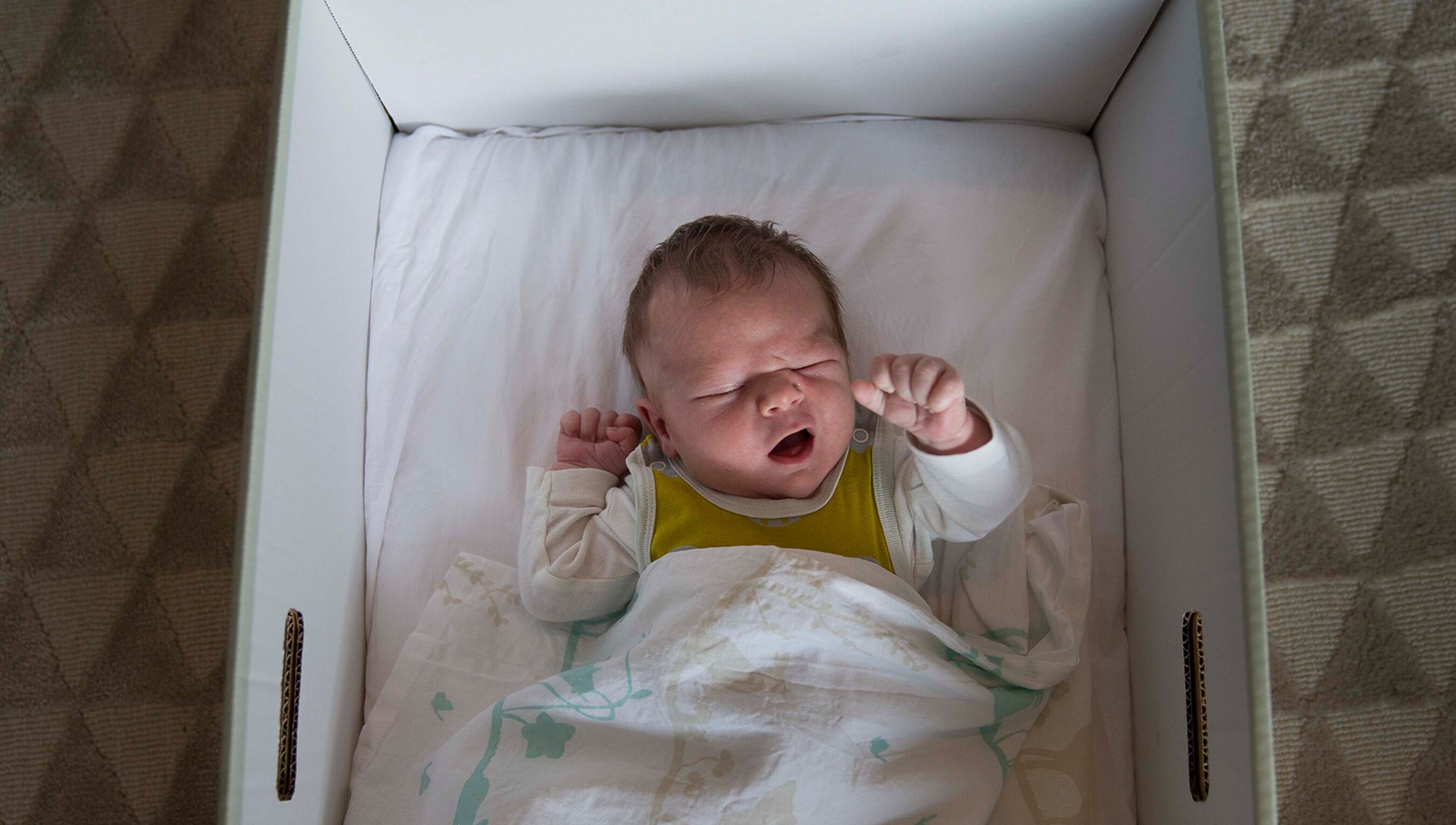 is a senior lecturer in history at Tampere University, Finland. She is also a senior research fellow at the Academy of Finland Centre of Excellence in History of Experiences (HEX). She is the author and editor of several books, including Lived Nation as the History of Experiences and Emotions in Finland, 1800-2000 (2021), co-edited with Ville Kivimäki and Sami Suodenjoki, and Valuing World Heritage Cities (2017).

Every year, a similar piece of news appears in the Finnish media: the latest version of the maternity package – or the ‘baby box’, as this welfare state provision and object is more commonly referred to outside Finland – that has been presented to the public by Kela, the Finnish Social Insurance Institution. This noteworthy event is always followed by a lively online discussion concerning the contents of the box. Is there something in it that’s completely new? Have some items been replaced by others? What are the latest designs and colours of the baby clothing included in the box? Of particular interest is the design of the winter overalls – a definite way to recognise babies born in the same year.

Finland of the 1930s, when the maternity package was first initiated, was a relatively poor agrarian country with high infant mortality: it differed greatly from today’s prosperous Nordic welfare state. Nevertheless, in the year 2021, the baby box retains its importance for Finns. Historical enquiry is needed in order to explore the role of the baby box as part of the longer-term experience of the Finnish welfare state nation. The history of the baby box sheds light on the everyday family dimension of the political community, and on the material and emotional dimensions of the welfare state.

The maternity package drew inspiration from interwar initiatives concerning so-called ‘circulating baskets’ that were given to families as a form of poor relief. After the adoption of the Maternity Grants Act in 1937, the maternity package was turned into a state benefit, at first provided on the basis of a family’s income, but, from 1949 onwards, universally. As a result, the package soon lost the stigma associated with poor relief. The Finnish government promoted it and Finns accepted it as a gift of the nation to all its newborn citizens – a nation that wished to increase its birth rate. Today, all families in Finland receive still the package, or equivalent financial compensation, regardless of their economic situation. And they are generally happy about that.

At present, 95 per cent of first-time mothers still choose the package instead of the cash benefit. Every so often, the Finnish government updates the box, and there have been some creative ideas of how to rethink it. The Ministry of Economic Affairs and Employment working group, for example, recently suggested that, in addition to the baby box, the state should open an investment account for all newborn Finns with an initial sum of €300 (c$360) per child.

In practice, the main concept of the box has changed surprisingly little since the late-1940s. In 1949, the maternity package contained a fair selection of items for the baby but also some for the mother. The baby clothes back then – shirts, coatees and swaddling clothes – were simple, white in colour and designed for a newborn. The idea was that the box would contain everything that a mother needed for taking care of an infant during the first months after giving birth. The box itself would serve as the baby’s first bed, and a mattress, a baby blanket and a bedsheet came with it. Sanitation products were also part of the package. Post-war economic scarcity was still visible in the 1949 package – some items, such as a bedsheet for the mother, were made of paper. A ball of wool yarn was included to encourage mothers to knit for their newborn. For 2021, the box contains baby clothes in different sizes, bright colours and the latest pattens. In addition, the box includes a sleeping bag, a winter overall, bedding and linen, other basic items for the care of a newborn, a first book and a toy. Kela now emphasises sustainability and quality over the quantity of the products.

The provision for receiving the maternity aid was – and still is – connected to having an expectant mother visit an antenatal clinic before the end of the fourth month of her pregnancy. In the prewar and immediate postwar years, the maternity package was part of a wider, and highly effective, strategy aimed at bringing mothers into the sphere of institutional healthcare as part of the fight against infant mortality. In rural areas especially, many women had been reluctant to consult midwives, and were overwhelmed by the detailed advice given them on childcare, housekeeping, nutrition and hygiene. These views didn’t change immediately after the war; however, collecting material aid in the form of a maternity package was a good enough reason for mothers to make their first visit to their local antenatal clinic. And by the early 1950s, the strategy had proved its worth: more than 90 per cent of mothers had registered themselves at clinics.

Because new parents and grandparents have also slept in such a box, it is a tradition linking Finns to their families and forebears

In 2017, the Scottish government announced that it would provide a free baby box for all babies due in Scotland. Much of the contemporary narrative in the UK with regard to the baby box has centred on its use as a ‘safe sleep space’ and the question of whether sleeping in the box contributes to the prevention of sudden infant death syndrome (SIDS). For Finns, this discussion feels remote. Some young parents still use the baby box as a first sleeping space for their newborn. Not because it is thought to prevent infant mortality but because it is a good and cozy sleeping place, which reminds the child of being in the mother’s womb. And because new parents and grandparents have also slept in such a box, it is a tradition linking Finns to their families and forebears.

In Finland today, the key interest lies in the sociomaterial, cultural histories and futures of the maternity package – the changing societal functions and the intergenerational meanings, experiences and memories related to the baby box. One perspective on the baby box can be gained by exploring it as an ‘emotional object’.

Emotional objects are objects that carry and transmit emotional associations, through their use, sight, touch or reminiscing upon. Some objects, such as a nation’s flag, are deliberately made to promote or express emotion. More mundane objects also, through their use, or through later reminiscences, acquire an emotional meaning. The baby box can be seen as both.

In a simple sense, the baby box is a cardboard box containing a collection of babycare items. When received and used by parents, it becomes associated with the care of one’s own child and endowed with meaning. The baby box elicits emotions ranging from love, hope, happiness and pride to sadness, such as sorrow for a lost child. All of these emotions, and many more, were expressed by people in the written reminiscences that my ongoing research project collected in cooperation with the Finnish Literature Society. The welfare state, and its institutions, in turn, also have expectations as to the boxes’ recipients: the future parents are assumed to experience the box in certain ways: eg, with strong parental feelings or in learning societally accepted and shared ways of caring for a child.

Another emotion that is expressed through the use and narration of the baby box is a sense of belonging through time. This box is an item that allows people to feel connected – to one’s family, and to the chain of generations, but also to the nation’s political community. It is, in this sense, comparable to a national flag perhaps. Receiving the box signals citizenship, and using it is a mundane act of belonging to the welfare state nation. As the scholars on everyday nationalism and lived nationhood have convincingly shown, the nation-state is (re)produced not only through symbolic representations but in people’s everyday lives, in a series of discursive, embodied and sociomaterial encounters and in negotiations between individuals, social groups and institutions.

Objects don’t elicit meanings and feelings as such on their own, but signify things within times and places, and for particular groups of people. There can be experiences connected with the baby box that, for example, different generations of parents share and that are reproduced over and over again, but there’s no single commonly shared Finnish baby box experience. The fact that the baby box has served as a tool of equality and inclusion, giving every child and family an equal start, doesn’t make it automatically inclusive for all, for example for ethnic minorities. Not everyone can or wishes to belong to the welfare state nation as envisioned in association with the maternity package. The meaning of the baby box shouldn’t be simplified; it is a diverse and multilayered experience. Gender, ethnicity, social class, age, generation, geography all play a role in shaping it.

The Finnish maternity package has been a successful social and health innovation. The growing interest that it generates abroad also relates to its role as an emotional object. For some Finns, the positive attention serves as a source of national pride. The international recognition also feeds back into the narrative of the baby box as a symbol of the welfare state.