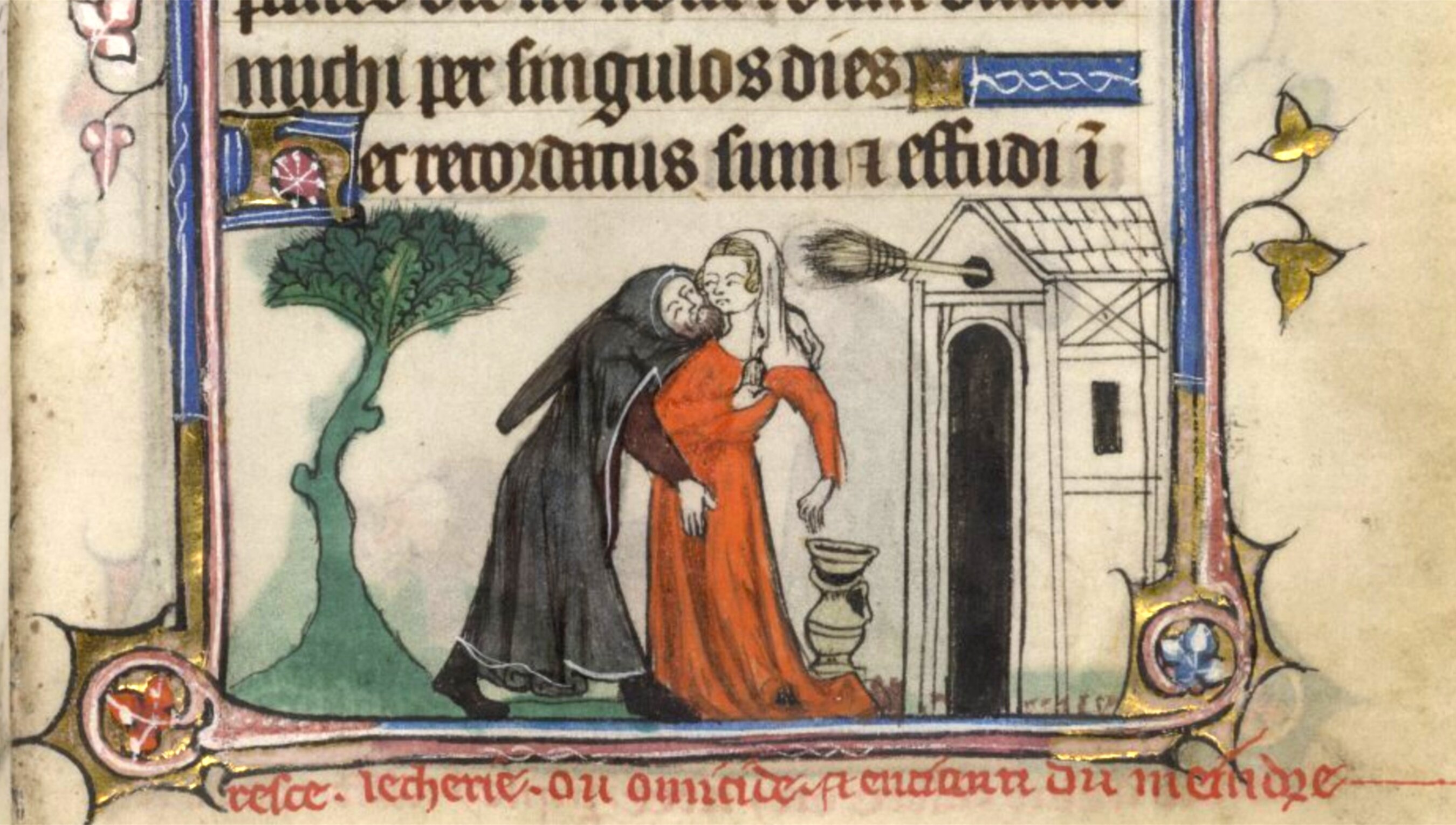 Get medieval on your haters: lessons from Beowulf and Chaucer

is professor of English medieval studies at the University of Bonn. Her writing has appeared in The London Review of Books, The Times Literary Supplement, The New York Times, The Atlantic and the LA Review of Books, among others. She is the author of The Experience of Education in Anglo-Saxon Literature (2018). She lives in Bonn in Germany.

A military man’s achievements come under scrutiny. A woman is mocked for her scandalous behaviour. A prominent author is taken to task for his misogynistic books. These could be modern cancellations in the making, but they come from medieval literature. The threat of disrepute, and what happens when people face it, fascinated medieval writers. In poems and prose, they showed legendary heroes – and occasionally, versions of themselves – cannily rescuing their reputations.

Reputation mattered to medieval people a great deal, in many ways more than to us today. They were concerned about what could happen to their public standing; to people at the time, both glory and infamy seemed to move as fast as the wind. And just as today we usually understand how unreliable public opinion is, so did people in the past. Anyone in the Middle Ages with a decent classical education knew that Latin fama meant both the positive kind of renown gained for great deeds, and mere rumour. In the Latin epic Aeneid, a popular medieval school text, Virgil depicted ‘Fama’ as a horrible feathered monster covered in many tongues, mouths and ears. She doesn’t sleep, but flies through the night screeching and terrifying cities with her mix of facts and crooked lies. So how do you fight rumour, the beast that never rests?

The mythic hero Beowulf faces the challenge of overcoming his youthful notoriety when he arrives at Hrothgar’s hall announcing his plan to rid the Danes of their pesky cannibal infestation – the monster Grendel – or die trying. The situation is politically awkward: Grendel’s midnight snacking on warriors has made Hrothgar’s headquarters uninhabitable, and the news of the great king’s failure to protect his people has spread as far as Sweden. But Beowulf’s reputation, and it isn’t all good, has preceded him. The word has gotten around that he is a blowhard, taking foolish risks and making promises he can’t fulfil.

Unferth, one of Hrothgar’s courtiers, bristles at the thought of another man enjoying more glory than he does. He tries to bring Beowulf down by recalling a swimming contest between the would-be hero and his boyhood friend Breca. As Unferth puts it, the two jeopardised their lives at sea for a week and, in the end, Breca won and Beowulf had to eat his words. This is when we see that Beowulf has more than muscle going for him. Without missing a beat, he takes control and tells the story from his perspective: the two youths swam together for five nights, in which Breca was never able to take the lead. Then a storm separated them, and a monster pulled Beowulf to the sea bottom. Beowulf killed the creature and another eight like it for good measure. Afterward, the beasts never bothered sailors again.

Unlike other sinners, who would spend time in purgatory, Kempe’s vilification would earn her a trip straight to heaven

Faced with an insecure thane questioning both his brawn and his good sense, Beowulf fills the story with details that will impress the Danes. Of course, no one really knows what he did at the bottom of the sea, and Beowulf is not above a little white lie when he’s fighting monsters. But he succeeds in conveying that his youthful hijinks prepared him for supernatural pest control. Then he turns the tables. ‘I haven’t heard anyone talking about you in such battles,’ he says to Unferth, pointing out that Grendel would have had a hard time chomping his way through the Danish nobility if Unferth had been as fierce as he let on. All Unferth can boast of is the shame of killing his own brothers. Beowulf defends himself by recasting his failure as a success. Then, before anyone has a chance to question him further, he goes on the attack.

Perhaps an even more effective way to respond to criticism – especially when it is unfair – is to bear the hatred of critics as a badge of pride. Christianity offered a useful model: Jesus was depicted as an outsider, mocked and reviled by the masses, and saints’ lives presented early Christian martyrs as heroes who were bold enough to affirm their faith in the face of social disapproval and violent punishment. Rejection and ostracism form a central emotional experience of Christianity. A prophet has no honour in her own country, after all.

This is the approach that the 15th-century mystic Margery Kempe took when she faced public scorn for her unusual conduct. After a devastating postpartum psychosis, Kempe began having conversations with God and dressing in white, a colour reserved for celibate holy women. To the dismay of her husband, she decided to stop having sex and, to the annoyance of almost everyone, she became a vegetarian. Kempe also had a habit of interrupting church services with loud fits of uncontrollable weeping, falling to the ground for good measure.

Kempe’s conduct won her few admirers. Some thought she was a hypocrite who could cry on command, others believed her crying fits were due to illness or possession by evil spirits. Strangers insulted her in the street, friends abandoned her, and few people could stand to share a meal with her. Church authorities arrested her on suspicion of heresy. And, in the 15th-century version of subtweeting, friars preached against Kempe with such detail that everyone present knew they were referring to her.

We know these details from the book that Kempe had written about her life, in part to address her notoriety. In her account, her strange actions were the result of her special relationship to God. God was the one who commanded her to give up meat and sex, and God subjected her to disruptive outbursts of emotion in inconvenient places. It isn’t that Kempe didn’t care about what people thought of her – in fact, she was genuinely hurt by her bad reputation. But God talked to Kempe directly, she insisted, assuring her that ‘the more derision you suffer for my love, the more you please me.’ Unlike other sinners, who could expect to spend some time in purgatory, Kempe’s earthly vilification would earn her an expedited trip straight to heaven: ‘you will have no other purgatory than the slander of the world.’

If, try as you might, you can’t see a way to shed a more positive light on your actions, then you can admit to your wrongs but portray your accusers as petty and unsophisticated for being so upset about them. In a playful work written late in his career, Geoffrey Chaucer depicted a fictionalised version of himself being denounced for writing misogynistic poetry. (Let’s call his alter ego ‘Geoffrey’.) The Legend of Good Women begins with the God of Love attacking Geoffrey for versifying Criseyde’s betrayal of Troilus, thus putting all women in a bad light: ‘Could you not find in all your books some story of women who were good and true?’

Geoffrey’s entire career is on trial in the Legend, but he has a defender. Queen Alceste argues that he’s an idiot, doesn’t think about his material, and isn’t a very good poet anyway. He can barely be held responsible for the poems he writes. Instead of death, the court decides to give him a lighter sentence: Geoffrey is to write a collection of stories about ‘good women’ who were true in love, and of the ‘false men’ who betrayed them.

Chaucer is clearly making fun of naive readers who expect two-dimensional characters that will make them feel, in today’s parlance, comfortable. His Criseyde might have forsaken her lover, but she remains one of the most complex and nuanced female characters in English literature. In contrast, the stories that Geoffrey relates in the Legend are tedious and repetitive. Every woman is a saint and almost every man is a cold-hearted deceiver. Some of the women, like Cleopatra and Medea, had bad reputations in the Middle Ages, so he leaves out any details that might have stirred trouble. His audience would have known that Medea killed her own children, but he’s not going to mention it.

Geoffrey eventually seems to get bored with the project, cutting stories short and leaving the work unfinished. The result is one of Chaucer’s less successful poems, apparently on purpose. ‘This,’ Chaucer seems to be saying between the lines, ‘is what happens when you write to please your critics.’ He doesn’t attempt to make himself look more virtuous. Instead, he demonstrates that his critics, though earnest and well meaning, know little about what makes good art.

Beowulf, Margery Kempe and Geoffrey Chaucer all knew that, when your reputation is at stake, you have to find a way to rise above your naysayers. Beowulf did it openly and aggressively: he could stand to make enemies as long as he delivered Grendel’s head. Chaucer had to be cagier, pretending to appease his detractors even as he mocked them. Kempe played the most ambitious game, claiming that her defamation gave her a get-out-of-purgatory-free card. Despite their different strategies, they all knew that rumour and criticism weren’t fatal, but could be transmuted into greater and more lasting fame.