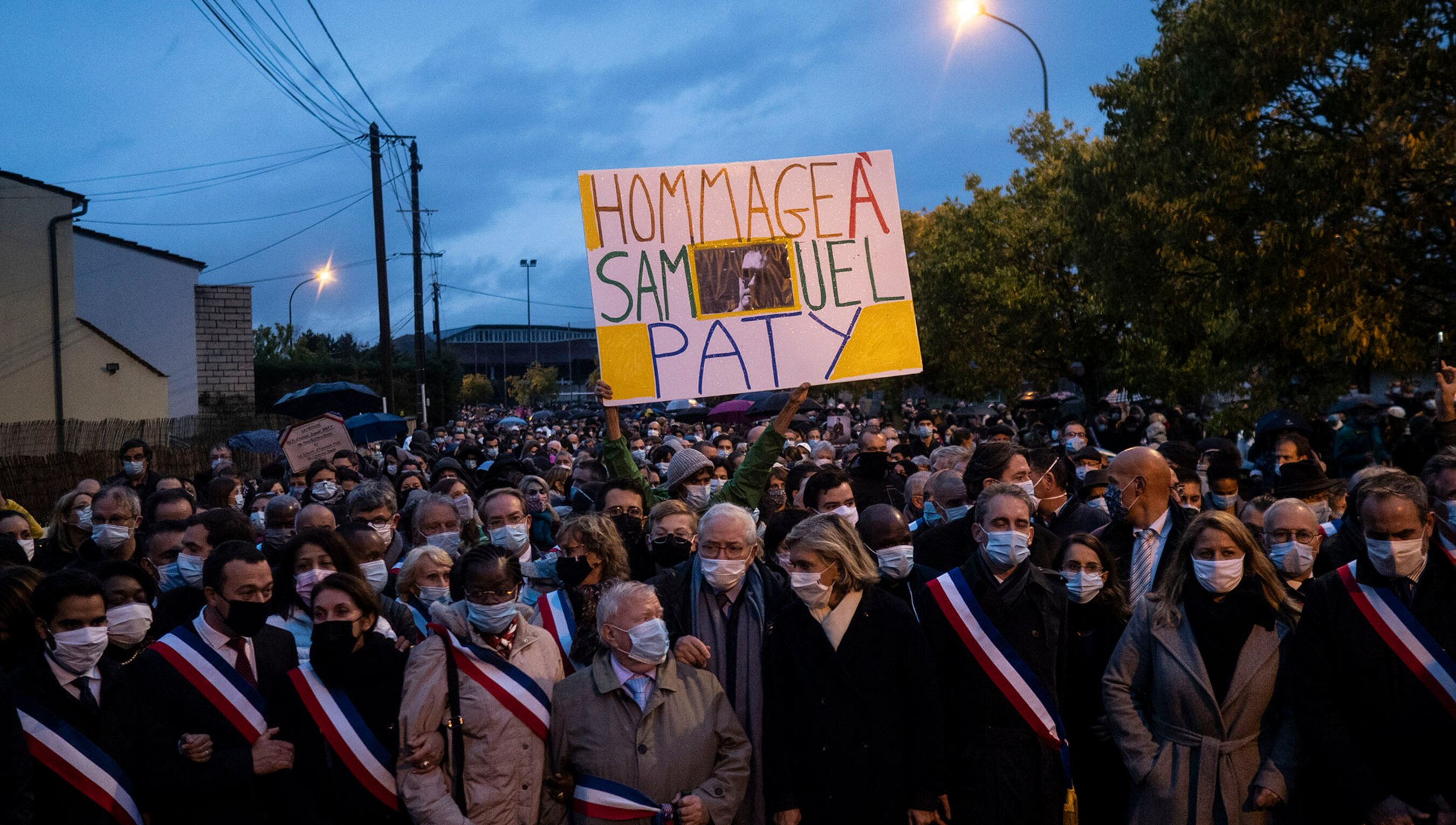 History teachers are no longer just educators but trauma specialists

is a guest scholar at CY Cergy Paris Université and the leader of the European Commission-funded project Again Never Again. She is the author of the monographs Trauma Transmission and Sexual Violence: Reconciliation and Peacebuilding in Postconflict Settings (2020) and Sexuality after War Rape: From Narrative to Embodied Research (2019), and the co-editor of the forthcoming volume Engaging with Historical Traumas: Experiential Learning and Pedagogies of Resilience (2021). She lives in Paris.

When the French middle-school teacher Samuel Paty was knifed to death by a teenager, who was offended when he learned that Paty had showed cartoons of the prophet Muhammad as part of his lesson in civic education, it hit me professionally and personally. Days after the event, I found myself trying to navigate emotionally loaded conversations with friends who were raised in the spirit of laïcité – the idea of a strict separation of religion and state – and almost dogmatic belief in the ultimate power of freedom of expression, a symbolic and constitutional byproduct of one of the most important events in French history.

At the same time, it was only with this event that I fully acknowledged that, since my arrival in Paris last year, most of my new friends were predominantly of a Muslim background. Considering the long and disturbing history of French intervention in North Africa and beyond, and the long migration history between the two worlds, French Muslims are today as much a part of French history as is the idea of human rights. Yet, a few days after the attack on Paty, with France and the world divided and overwhelmed, I joined my friend Mohamed to test his new bike. As he sped past me down avenue de l’Opéra, I found myself self-censoring to avoid calling his name out loud.

In my private life, this event seemed divided between the pain of an attack on core French values of the inviolability of the republic, on one side, and the intellectual pursuits of open Islamophobia, masked in the right to freedom of speech, on the other. But, in my professional life as a social justice educator and trauma researcher, the event exceeded even the scope of French historical and sociopolitical space. This was a symbolic, yet extremely real, call to duty that Europeans rarely want to accept: paying for centuries of symbolic, cultural, political and physical murders worldwide. At the point of Paty’s murder, I was in the middle of the qualitative research for my current project, which deals with the classroom transmission of collective historical traumas in Europe, and our inability to seize this transmission as an opportunity to prevent further identity-based violence. Several studies on mass atrocities, including slavery, the Holocaust and the Srebrenica genocide, have by now proven the correlation between historical trauma and contemporary identity-based violence (such as racism, antisemitism and Islamophobia).

Europe’s past and present are bloody. Collective traumas are brought into multicultural classrooms

As part of my research, I have been conducting interviews with university professors and lecturers who teach in history departments in countries across Europe. After the murder of Paty, the conversation remains charged: I am encountering more pessimism, sadness and hopelessness, and professors express greater concern over the potential risks of exposing the troubling content of European history. Much more than before, history teachers see the potential for Paty’s experience to be repeated in their own classrooms.

My interviews have been illuminating. Professors from the Netherlands and Germany mentioned specific instances of history teachers in their respective countries being threatened and forced into hiding. A professor from Estonia mentioned the risk he encountered when, after explaining the consequences of Stalinism in the post-Soviet world, a Georgian student became visibly upset. A professor from Sweden ran into Holocaust denial from students with Arab backgrounds. Professors from Austria and the United Kingdom, both white males, expressed the challenge of discussing slavery in their multicultural classrooms comprising mostly students of colour. A few of the interviewed professors even mentioned students’ disclosures of sexual assault after lessons covering mass rapes that occurred during conflicts in imperial history.

Europe’s past and present are bloody. Collective traumas are transmitted not just in our families, but brought into multicultural classrooms, spaces filled with historical pain. The collective trauma of our students should, of course, be part of history education. Yet most teachers today are unprepared to critically approach – let alone heal – this pain.

None of the professors interviewed for my study had ever obtained institutional guidance on how past collective traumas can be triggered by current inequalities, nor professional training for responding to potential triggers when exposing students to traumatic historical sources. Did Paty have this training? When he tried to lower the temperature by inviting any students who thought that they might be offended by the cartoons to briefly leave the classroom or close their eyes, how was this awkward, obviously disastrous decision informed?

As a university professor, you rarely get institutional guidance in crucial skills important for today’s teaching, such as multicultural sensitivity, emotional intelligence, and mediating skills to navigate disagreement and promote empathy and respect. The professors that I interviewed expressed the need for more guidance and support before exposing students to potentially traumatic material, and have themselves struggled to work on this within their classrooms. They mentioned, as an obstacle, the rigid European system of teaching practices that still favour what the philosopher of education Paulo Freire called the ‘banking model’ of education, namely, the idea that knowledge is ‘deposited’ into students’ heads through the receiving and memorising of facts; this is opposed to practices that encourage questioning and adopting a critical approach to the information provided by educators. In addition, the overpacked curricula and limited time frame don’t allow for much personal connection with the students: a professor from France mentioned her frustration at having only two lessons in the entire course dedicated to the two world wars. Within such a time frame, it’s unrealistic to offer not only space, but also a safe space, to address the plural identities of our students that are built on the intersections of individual, family and collective traumas.

Several of the professors that I interviewed remained extremely hesitant to pathologise narratives of difficult pasts, even as the trauma industry has exploded, particularly with the rise of memory studies in Europe. Some refused to participate in my research, even though they were teaching courses on colonialism, state repression, migration, civil wars or the histories of the 20th century. They told me, flat-out, that they wouldn’t deal with trauma; if I hoped to do so, I should contact the social work or psychology departments.

Such a response is based on the current, clinically oriented understanding of trauma. This explains, in part, why educators don’t recognise the potential connection between some of the historical material in their curricula and students’ struggles; it explains the lack of trauma-symptom recognition. A traumatised individual can experience negative emotions such as flashbacks, anxiety, depression, feeling emotionally numb, but can also turn toward aggressive and violent communication – less recognised indicators of trauma. Anger that leads someone to behead an unknown person might result from years or generations of stored frustrations, marginalised identities, collective losses, exclusion, and inability to grieve.

The study of history must include sensitivity to the traumas of students, experienced firsthand or transmitted across generations

Despite all this, a Swedish professor that I interviewed believed that, by the time young adults reach the university level, they have already learned enough about the traumatic past within the primary- and secondary-school curricula to comprehend this trauma without any negative emotional impact. Similarly, a professor from Spain emphasised that, by having freely chosen to study history as a university subject, students are assumed to be mature enough to accept responsibility for their emotional reaction to archival sources, oral histories and visual testimonies full of disturbing graphic imagery and descriptions.

As it turns out, the biggest problem isn’t the emotional readiness of university history students. The problem arises later, when many of these students become employed in public service organisations, among which are primary and secondary schools, civil and nongovernmental organisations in the informal education sector, and museums. These individuals become frontline workers who don’t have the privilege of teaching only handpicked, mature learners. In addition to communicating factual knowledge, they have to navigate between preserving the role of history in conjunction with collective national identities and raising children in the spirit of active civic education.

Teaching history in European public schools today means working in a context where the victories of our big nations, as taught in the state-governed curricula, are nothing but collective and family traumas for so many of our pupils who have actively lived through the persistent existence of structural violence – exclusion, othering and discrimination. To prepare these teachers to operate in such complex and emotionally demanding environments, we need to provide them with the skills and knowledge that will serve to break the cycles of history-based inequalities and oppressions – this is exactly why the study of history must include sensitivity to the traumas of students, experienced either firsthand or transmitted across generations.

Paty and his murderer, Abdoullakh Abouyedovich Anzorov, aren’t representatives of the two sides of one of the most striking social divisions in France. They’re a call for Europe to acknowledge the pain inflicted on generations of communities around the world. What we need is a deeper and more systematic understanding of what sustains this pain. What we need is to understand that contemporary history teaching isn’t dealing only with historical facts and sources. It’s a display of how far we’ve come with progressive European ideas, liberties, freedoms and human rights – the values that so many Europeans, including myself, identify with and wouldn’t want to negotiate. But it’s also a display that this modern, progressive Europe was built on continuous practices of violence, oppression and sustained inequality.

The beauty of education is that it has the power to transform pain into healing and exclusion into inclusion. Freedom of expression in today’s Europe means nothing unless it applies to all of us. The same is true with learning and teaching history: it means nothing if it doesn’t include discussion of and sensitivity to pain that we don’t consider our own.