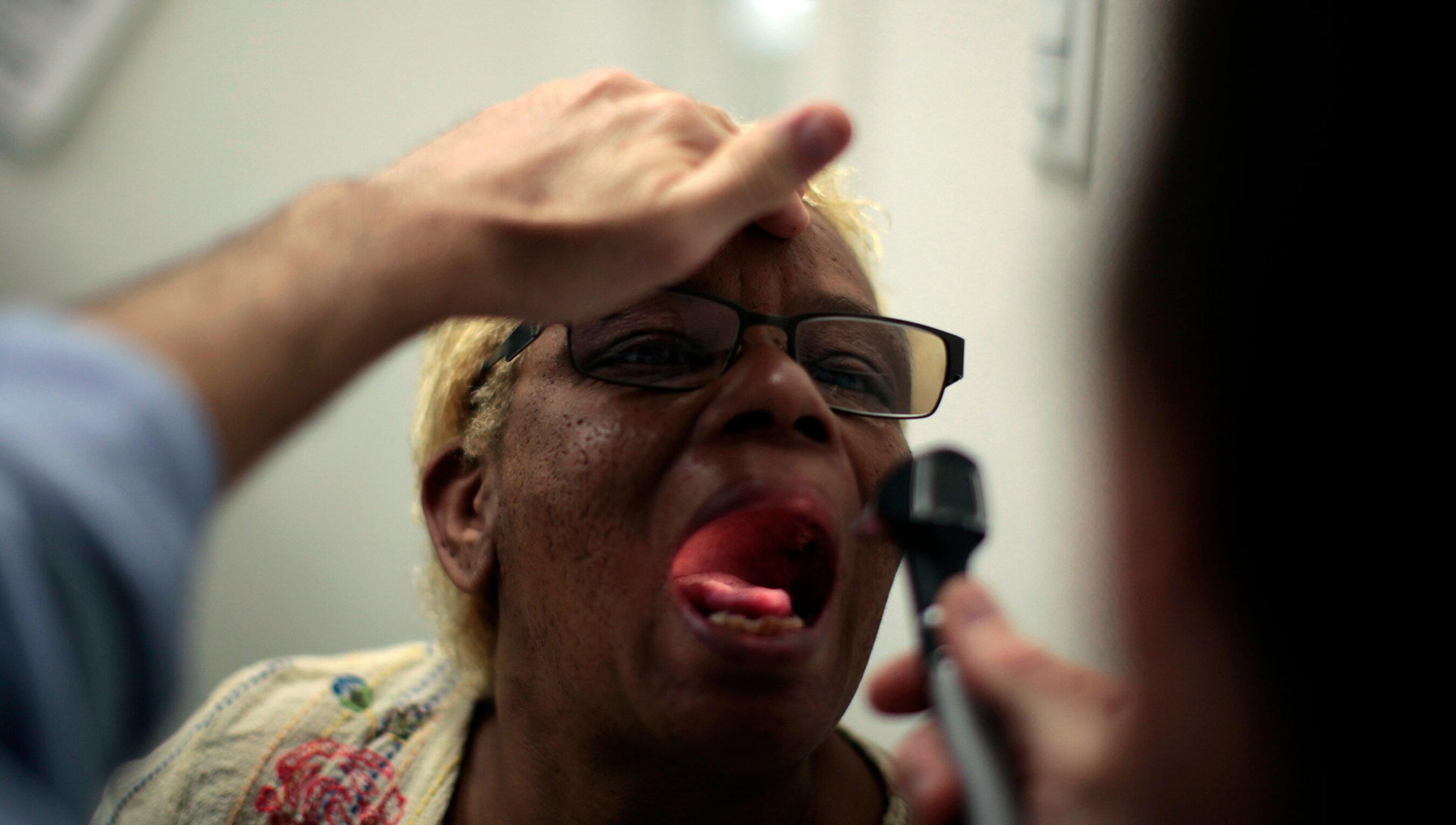 Homeless, delusional, and brave, Mrs A taught me a powerful lesson

is a clinical psychologist who has been in private practice for more than 35 years in suburban New Jersey. She also has a Master’s degree in science writing and writes for Drizzle.

In the winter of 1978, Jacobi, the massive New York City public hospital in the Bronx, was bracketed by record-breaking piles of snow, tinted grey with dirt and ice. I was a 26-year-old psychology intern working in the locked psychiatric ward of 9 East. Violent patients were common in the emergency room that season, filling me with foreboding.

One of my new admissions was Mrs A, a Black woman in her mid-50s, crumpled in a wheelchair, barefoot with bloated, discoloured feet, dressed in rags, muttering ‘word salads’, the unintelligible, random verbal array typical of chronic schizophrenics. She smelled rank. I learned that she was homeless. The cops brought her in to prevent her from freezing to death.

I knew the daily drill. First, Mrs A would have a brief physical. Then, the psychiatric residents would medicate her with antipsychotic drugs. After that, I would meet with her daily to assess her mental status and, once stabilised, she would be released. Mrs A was not happy to be confined to 9 East. Despite the frigid weather and her frostbitten feet, she wanted out of the hospital.

On Mrs A’s second day on 9 East, a brusque surgical resident beckoned me. He had examined her feet. ‘Amputation is essential,’ he told me, ‘and must be done at once.’ I met his gaze, too shocked to say anything. Mrs A’s feet were severely frostbitten, a condition leading to gangrene. ‘That will kill her,’ he added.

I asked about other treatment options.

He sighed, mentioning hydrotherapy: soaking the feet in a whirlpool bath and removing the infected tissue. I could tell by his impatient, imperious expression that he didn’t recommend it. He hinted it would take too long. ‘Look, your job is to secure this woman’s consent as soon as possible,’ he said. He pointed a finger in my face: ‘If you can’t, then declare her insane and give the consent yourself. Got it?’

With trepidation, I prepared to tell Mrs A that she must have her feet amputated.

I looked for Mrs A to tell her what the surgical resident had mandated. She had cleaned up a bit and displayed the more lucid look that psychotic patients show once potent antipsychotic medications begin to work. Still, her speech reflected an ongoing psychotic thought disorder. Tangential, oddly repetitive, illogical thoughts streamed from her mouth. How would I be able to have this dreadful conversation with her? I wondered. I wished I didn’t have to.

Mrs A looked at me, determined and calm. We’d switched roles; I began to rely more on her judgment than on mine about amputation

I found a quiet spot off the unit for us to sit together. As I wheeled her there, a wave of nausea spasmed in my stomach. What am I doing? Quickly, I shoved the doubt away to tell Mrs A that her feet must be amputated. She looked at me as if I were the psychotic patient. She was horrified. Her eyes flashed fury, and she adamantly refused to give her consent.

She wanted to know about treatment alternatives. She asked questions, and I was struck by how reasonable they were. I felt ashamed that I’d passively gone along with the surgical resident’s mandate, assuming that this woman didn’t have the know-how or the will to resist. Mrs A looked at me, determined and calm. We’d switched roles; I began to rely more on her judgment than on mine about amputation.

A question nagged at me. Would the surgical resident have been so hasty to insist on amputation if Mrs A were white and not homeless? I knew nothing about racial biases in healthcare in 1978. I didn’t know that Black Americans’ limbs are amputated at a far higher rate than white Americans’. And Black patients are far less likely to be offered ‘a salvage procedure when presenting with significant peripheral vascular diseases’, according to an article in the Journal of American College of Surgeons in January 2018.

It is no longer breaking news that inequalities in healthcare for Black people are deeply entrenched in the US health system. We now know that Black people have higher disease rates and shorter life spans than white people. Black patients, compared with white ones, are prescribed less pain medication and, are less likely to receive advanced cardiac care. But what isn’t commonly known, even in this post-George Floyd moment, is that attempts to remedy racial and cultural insensitivities in doctors continue to fail.

I conferred again with the surgical resident to learn about the risks to Mrs A of refusing surgery. I asked about the pros and cons of hydrotherapy. Rather than answer my questions about the possible dangers of a nonsurgical approach to treating Mrs A’s frostbite, the resident snapped: ‘Do you know who you’re up against?’

Jacobi, where I was interning, is not only the major public hospital of the Bronx: it is also the teaching centre of Albert Einstein College of Medicine, one of the country’s prestigious medical schools. Our supervisors were senior professors of medicine, many with big names and even bigger egos. The chief surgeon to whom the resident reported epitomised the stereotype of the arrogant surgical superstar. And he was the chief I would be ‘up against’ if Mrs A refused surgery.

I visited the hydrotherapy service in the hospital to learn what their treatment entailed. A hydrotherapist had reviewed Mrs A’s chart and welcomed me. She was optimistic about saving her feet. But with one proviso: Mrs A had to remain in the hospital for at least six weeks and agree to daily hydrotherapy. She would have to soak her feet in a warm whirlpool for four hours each day and endure the removal of her dead, damaged and infected flesh, a process known as debridement, to expose healthy tissue and restore her feet to normality. If Mrs A refused to come consistently for hydrotherapy, explained the therapist, she could die.

‘Will the treatment hurt?’ I asked.

‘Yes,’ she answered, ‘but we’ll do our best to minimise her pain.’

I found Mrs A mumbling to herself in the corner of the so-called therapeutic milieu meeting room where we held our morning meetings, attended by all staff and patients. While ‘milieu’ conjures up a plush-carpeted setting with upholstered furniture and soft lighting, the 9 East meeting space had a pockmarked, dirt-encrusted linoleum floor, uncomfortable, cracked, blue plastic chairs, and fluorescent lights that buzzed incessantly.

Despite the starkness of the room, I hoped to have a meaningful conversation with Mrs A about amputation versus hydrotherapy. But she had made up her mind, declaring: ‘No amputation.’ I explained that she could die of sepsis if she did not fully commit to daily hydrotherapy, adding that septic shock can occur quickly and is always life-threatening.

His face turned red, and his eyes bulged as he yelled that I was an idiot – a girl who was stupidly making a life-and-death decision about which I knew nothing

‘No surgery,’ she asserted while agreeing to attend daily hydrotherapy sessions. She contended that she could handle the pain and drudgery of the protracted treatment.

Whatever dread I’d felt on Monday was eclipsed by how I felt on Thursday when I trudged to the hospital, an icy wind blowing through my down coat, on my way to meet with the infamous head of surgery.

‘Mrs A is not consenting to amputation,’ I said meekly to the chief surgeon. His face turned red, and his eyes bulged as he yelled that I was an idiot – a girl who was stupidly making a life-and-death decision about which I knew nothing. On the verge of tears, I wanted to back down. But I pictured Mrs A’s determined demeanour and reminded myself that this was not my decision. It was hers. I stood firm, reiterating Mrs A’s refusal to have surgery, and strode off the unit.

True to her promise, Mrs A attended daily hydrotherapy sessions and never complained about the arduous foot treatment. Afterward, we’d sit together in the milieu room each afternoon, no longer noticing the cracked chairs and humming lights. It was just the two of us as she filled me in on her progress. Her psychotic symptoms had diminished over the weeks on 9 East thanks to consistent care in a heated environment with a bed, three meals each day, and regular doses of medication. As Mrs A emerged from psychosis, her grit and resolve shone through.

We developed a warm bond based on mutual respect and the unexpected pleasure that comes when two lives, so different, intertwine. She maintained her gruff persona with other staff and patients, refusing eye contact and begrudgingly barking responses to their questions. With me, the corners of her eyes turned up, and her gaze met mine during our daily check-ins. She answered my questions in complete sentences, revealing bits of her life story while also holding back. Once again, she was in control, choosing what to share and what to keep private.

On discharge day, six weeks after her admission to 9 East, Mrs A walked out of Jacobi on her two fully healed feet.

I was sad to see her go. Worried, too. A subway token and a list of local homeless shelters – our wretchedly inadequate parting gifts – meant that Mrs A would likely end up back on the streets. I doubted she would survive another winter like that of 1978.

Nearly 45 years after our time together, I carry an image of Mrs A in my head. I had been a newly minted psychologist studying all I could about psychopathology, psychiatric diagnoses, and psychotherapy. What I learned from Mrs A does not appear in any textbook or journal article.

Mrs A’s granite resolve carved an opening through my ‘I’m a good person’ veneer. She exposed my reluctance to stand up for her when it meant confronting a revered power figure. Perhaps I was like the surgical resident I’d privately condemned, believing that because Mrs A was mentally ill, Black and homeless, she wouldn’t care what happened to her body and lacked the self-respect to stand up for herself.

My experience with Mrs A changed me. I learned what it means to stand up for another person when the stakes are high. Mrs A gave me courage and taught me to be more human. No longer could I look away from the suffering of people under my care. Nor did I want to avert my eyes when I could help.