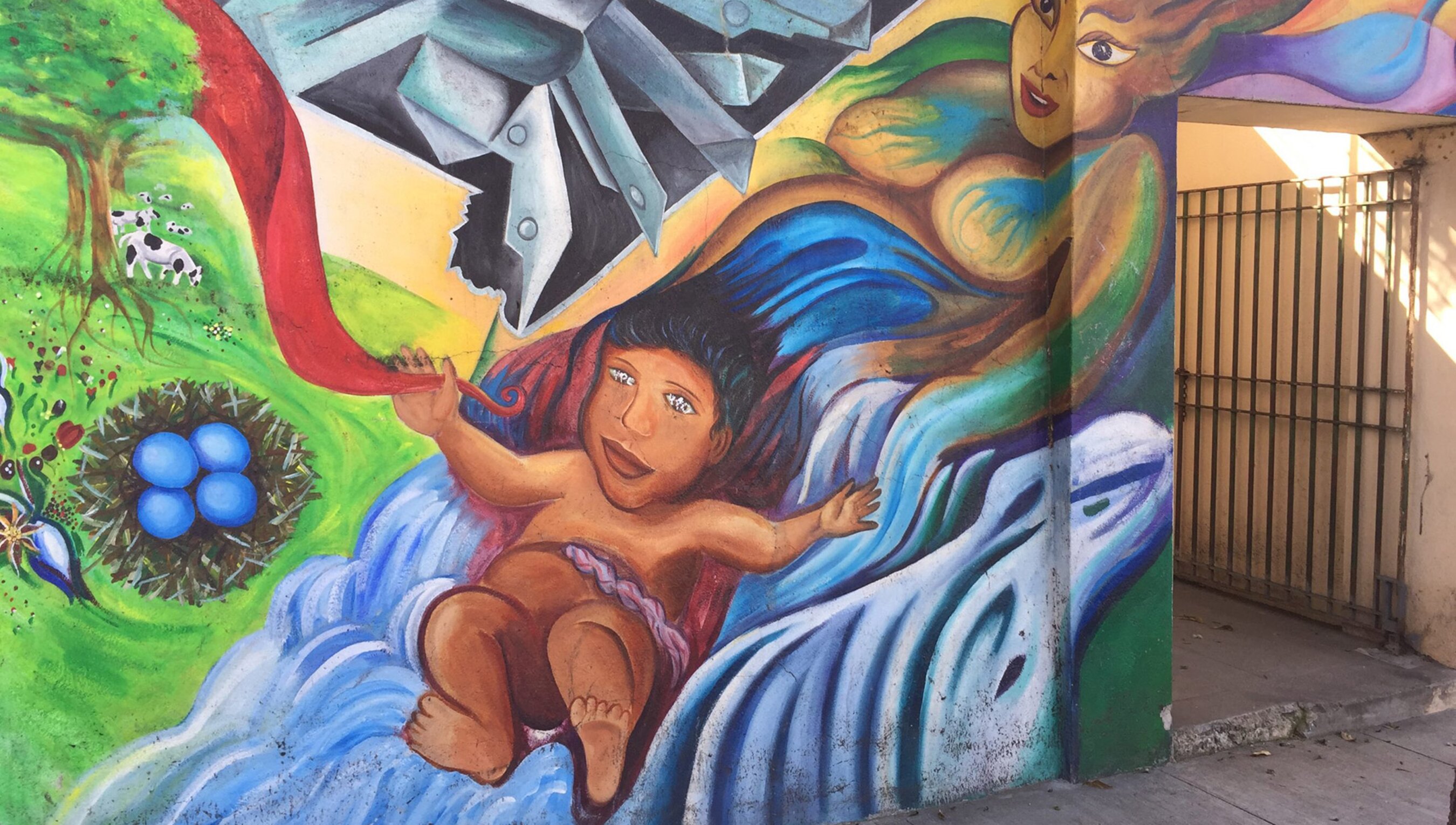 I saw my baby as a river flowing through me, and gave birth

is a visiting scholar at the Graduate Theological Union in Berkeley, California. Her current research is at the intersection of art, philosophy, religion and birth. She is the author of Imagery, Ritual, and Birth (2018) and lives in San Francisco, California.

Although art and images have always been important to my life and work, I never thought that looking at an image and then visualising it in my mind could lead to major physiological change in my body. But that is exactly what happened.

While pregnant with my first child in 2008, I was writing my PhD dissertation on art and religion in medieval China. My husband and I had placed a Daoist print called the Neijing tu on the wall above my desk and I looked at it every day while writing the chapter on Daoism. The Neijing tu, often translated as the ‘Diagram of Internal Pathways’ or ‘Chart of Inner Landscape’, is a body chart that depicts the inside of the human body as an intricate landscape replete with mountains, rivers, fields and people.

The diagram is an ink rubbing made from a 19th-century stone stele housed at the White Cloud Temple, one of Beijing’s most important sites of Daoism. The head of the body in the image is representative of Mount Kunlun, China’s mythical sacred mountain. The body is detailed, divided into what are called ‘elixir fields’, which in Daoism refer to fields or channels of the body through which internal elixirs of longevity and immortality are produced. The diagram also shows resident Daoist deities as encompassing the body.

The creation of Chinese diagrams such as the Neijing tu correlates with the use of internal alchemy in Daoism. Internal alchemy differs from alchemy more broadly, which is a laboratory science involving the transformation of metals into gold to discover an elixir of life. Daoists who developed internal alchemy believed that the ingredients necessary for immortality reside inside the human body. The diagrams most likely functioned as maps, guiding practitioners in their understandings of both the human body’s internal sacred spaces and its physiological processes. The stream flowing from the mountain along the spine in the Neijing tu, for example, represents the water and vital fluids of the body moving upward, circulating in reverse. Daoists practising internal alchemy believed that they could control the flow of the body’s internal fluids (including water, semen and menstrual fluid), thereby preserving their health and increasing longevity. For Daoist adepts, a physical image of this process of reverse circulation could help them to create a mental image of the same phenomenon, which would in turn lead to the goal: physiological and spiritual transformation.

I imagined a large river cascading down a mountain through my own body. The image was strong in my mind and my body was calm

Without planning for it, the Neijing tu played a crucial role in the birth of my child. Labour and birth were difficult for a few reasons, though the most pressing one had to do with the baby’s position as he exited the cervix. He was in a posterior position, which is not ideal for birth and meant that he was sideways, resulting in many hours of what is called ‘back labour’, a grating sensation felt at the bottom of my back. The baby’s positioning was not discovered until very late in labour, and the birthing phase, a part of labour that typically takes between 20 minutes and two hours, had gone on for more than four hours for me. I was eventually able to turn the baby’s position by rolling back and forth on the bed, a feat that now bewilders me when I think back to it. However, medical staff were concerned that the birth was taking too long.

It was at that time that I found myself thinking about the Daoist print, imagining a large river cascading down a mountain through my own body. The hospital room disappeared, and I visualised a baby riding the waters of the mountain and emerging from the river’s mouth. The image was strong in my mind and my body was calm. Shortly after repeating the mental process a few times, the child emerged from my actual body, born in great shape, a giant baby boy at almost 10 pounds and 23 inches long.

My experience with visualisation and physiological change did not relate to Daoist cultivation. However, it was a profound moment in my life, leading me to explore how people are using images and visualisation to help them, not only in giving birth, but in many other endeavours. Daoists are not the only ones who believe that mental imagery can transform the body. Contemporary research across areas of science and psychology also shows that seeing images in the mind may impact a person’s physiology.

A scientific interest in what happens to the brain during visualisation has become more sophisticated over the past few decades. A growing body of evidence shows that the brain works slightly differently when it manipulates mental images, as opposed to when it either sees objects in the world or creates a mental representation during activities such as remembering an image of an object from the real world. In a study from 2013, the cognitive neuroscientist Alexander Schlegel and his colleagues used fMRI to study the brains of individuals who mentally constructed or deconstructed shapes and figures that they had not previously seen. Schlegel’s team found that participants’ brains acted in a unique way, networking more regions of the brain than those used for either visual perception or simple mental representation alone. Other neuroscientific studies have used high-resolution MRI and fMRI to examine how long-term meditation with attention on mental content is associated with increased grey matter density in the brain. This indicates that long-term meditative practices, some of which include visualisation, may even have an impact on the structure of the brain.

When athletes repeat mental rehearsals of impending sports events, this may improve the actual performance

There are well-documented problems with the use of fMRI to draw results on brain activity, however. As the neuroscientist Craig Bennett and his colleagues showed in their ‘dead salmon study’ back in 2009, for example, fMRI studies that have not been corrected for multiple comparisons and avoiding false positives can be used to detect almost anything. In the case of Bennett’s study, which eventually won an IgNobel Prize in neuroscience, the final results of an uncorrected study on a dead salmon showed increased activation in the salmon’s brain.

However, other neuroscientific studies using different methods have also shown that focused mental practice of a physical exercise has an impact on brain plasticity. In these cases, the brain functions similarly during mental practice to how it would during the actual physical exercise itself. One seminal study using transcranial magnetic stimulation, for example, showed that mental practice of a finger-tapping sequence on five separate days related both to an enlargement of the motor cortex brain region responsible for representations of the fingers, as well as an improved motor performance of the actual fingers.

Cognitive scientists and sports psychologists have for years studied the connection between imagining a physical workout and an actual increase in physical strength. Similar to the findings in the neuroscientific study on finger tapping, studies in these fields have also shown that when athletes repeat concentrated mental rehearsals of impending sports events, the rehearsals may improve the actual performance. Olympians such as the swimmer Michael Phelps and the gymnast Gabby Douglas describe visualising their events in detail, sometimes hundreds of times. Phelps imagines himself either swimming or watching himself swim at the events he is practising for. He claims that these mental exercises, as opposed to his intense physical training, have been the key component to his success.

I became aware of a collective interest in using art and other objects for visualisation purposes during birth only when pregnant with my second child in 2010. At that time, influenced by what had happened with the image of the Neijing tu during my first labour, I began looking for more images that might help me again during the second birth. Creating a blog devoted to visualisation and birth, I came across many stories of women using art and other images to help them in the visualisation of birth, which in turn helped them to give birth. Some of their visualisations included flowers blooming, sea mammals giving birth, land animals giving birth, water flowing, caves opening to the sea, and any of a number of art images depictive of birth or opening that they had seen and then imagined in their own minds.

Much of what I found also had an impact on my academic research. As an interdisciplinary scholar with a background in religious studies, art history and philosophy, I began to explore a wide range of interrelationships in the humanities between art, visualisation, philosophy, religion, culture and birth. This research resulted in a book about birth, imagery and art, and a number of other publications. It also shaped the way I have taught university students about how art informs our thinking and our being.

In May 2011, our daughter was born in the kitchen in the middle of the night. Like her brother, she was a large baby. Yet, compared with the arrival of our son, her birth could be described as a breeze. In the days, weeks and months leading up to labour, I referenced a wide variety of images, looking at them and visualising labour and birth. I will never know the extent to which my looking at these images and visualising them were responsible for my daughter’s easy birth, nor whether my mental construct of the Neijing tu is what ultimately led to my son’s birth after many hours of labour. But there is some evidence – both scientific and anecdotal – that art and other images, as well as our imaginations of them, can affect how our bodies function.